A visit to Kayakoy ghost village leaves you yearning to know more. Wandering the deserted streets, and passing by crumbling houses and a church, curiosity washes over you who lived in that house, how old were the children going to school, and did residents, with a clear memory of their home village, miss it, after it was all but abandoned 100 years ago.

Sitting a short distance from Fethiye main town, Kayakoy is one of Mediterranean Turkey’s most popular attractions. Hosting thousands of visitors every year, most agree, the lifeless streets leave them with an eerie feeling of what was, what could have been, and why it all went wrong. 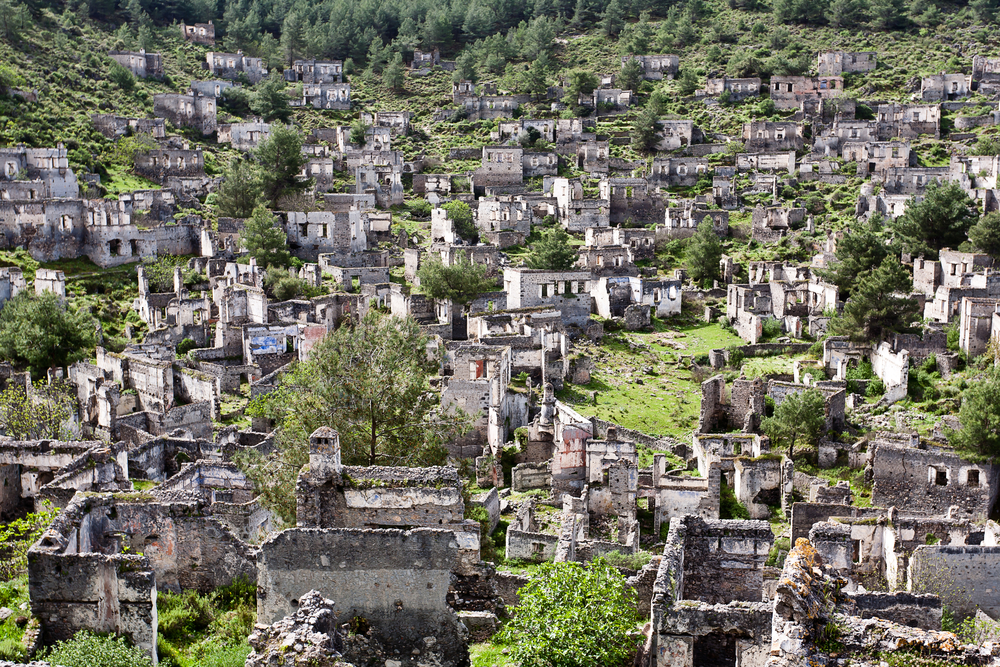 The History of Kayakoy Ghost Village

Just over a century ago, 10,000 Greeks and Turks lived side by side; a scene replicated in many towns and villages across Turkey. Greeks called it Levissi, while Turks called it Kayakoy. Both communities had different religious beliefs, but for the large part, it worked well as they came together to thrive as one, as they had done since its 14th-century roots.

However, as seen before in history, political events outside of our control can turn people's lives inside out. The turn of the 19th century was no exception, because over a slow period, the Ottoman empire crumbled. After the Turkish War of Independence, the Turkish Greek population exchange, in 1923, also known as the Lausanne Treaty thrust many civilians into limbo. Officials ordered 6,500 Greek Christians to Fethiye harbour, to deport them. Likewise, Muslim Turks living in Greece were told to return.

Some historical records say the arriving Turks struggled, as their lifelong trades were different from the agricultural land surrounding them. They started to abandon it in favour of places where they could ply their trade. By the 1950s, those who were left, fled after an earthquake devastated the area, and Kayakoy became an abandoned village.

The author, Louis de Bernieres who also made mountains of money by penning the famous Captain Corelli’s Mandolin, had literary circles in suspense when he wrote, Birds without Wings, a tale of love and war in a post Ottoman Turkey. For many years, he would not confirm or deny whether Kayakoy was the setting in the novel.

The story plotline defines the location as Mediterranean Turkey and tells a story reminiscent of Turkish Greek population exchanges where communities turned on each other. In a 2004 Guardian Newspaper interview, he also cited his inspiration as a ghost town in southwest Turkey, of which its demise started when the Christian population was deported.

In his book, the village Eskibahace has many similarities, and while he says the core themes are love, war, honour, and death, avid readers with a knowledge of Turkey’s history and geographical regions will spot the resemblance to Kayakoy.

Wander around the streets of Fethiye, and most excursion shops sell guided tours of Kayakoy. They are perfect for people who want to more about the historical timeline, or to have the luxury of someone organising transport, and food for them. Going alone is another option since local buses from Fethiye town centre and Oludeniz run in that direction. The benefits are walking around at your own pace.

Whichever you choose, allow time to soak up the air of mystery surrounding the village. A slow walk up cobbled paths, and past the skeletons of houses also leads to the hilltop from which a fantastic Mediterranean Sea view awaits. Kayakoy splits into two parts; the old abandoned covers the hillside while the new part sits on the valley floor. Both are worth exploring before finishing your day in a nearby restaurant serving delicious Turkish cuisine like Lamb Tandir.

While exploring the old part, find the Panayia Pyrgiotissa Basilica, the largest of three ruined churches under preservation status. The Gothic style architecture looks impressive from the outside but the interior lays in ruins so use your imagination to go back when baptisms and weddings took place among Kayakoy’s Greek inhabitants. 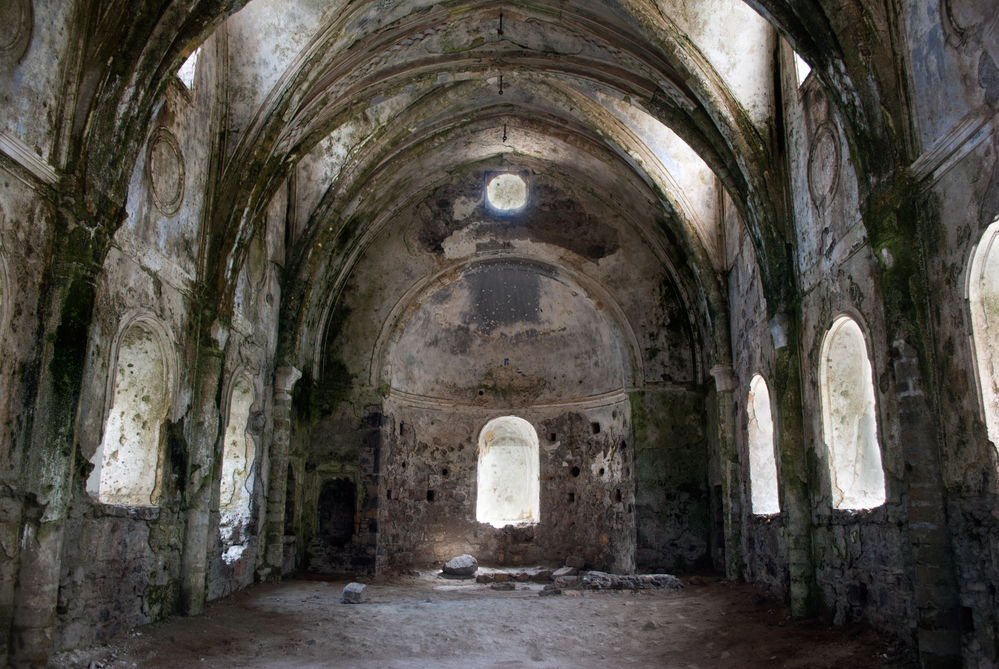 Russell Crowe and the Water Diviner

To enhance your visit, watch the block busting Water Diviner film featuring Russell Crowe, in which an Australia farmer travels to Turkey after the Gallipoli war to find out what has happened to his three sons, who were Anzac soldiers. Kayakoy was the setting in the last part of the film, and it caused much buzz to have an international celebrity like Russell visit. Such was its roaring success; it was the highest grossing Australian film of 2014.

Many foreigners fall in love with Kayakoy and often return with the dream of buying a traditional stone house. Protected Kayakoy ghost village is a designated archaeological site, so the new part is where residents live, and the atmosphere does not disappoint. Local articles report artisans are also moving back into the village, just like those who lived there 100 years ago.

Original houses built with stone and wood are reinforced with modern buildings standards but keep their core themes of courtyard gardens, rooftop terraces and large bedrooms. It is also vital to preserve the original purpose of making the houses as warm as possible in winter but cool in summer. Altogether living in Kayakoy represents Turkey away from the urban landscapes and modern housing developments. It is like having nostalgia on your doorstep.

While buying property in Turkey, is an attractive option and a chance to own a slice of Mediterranean Turkish heritage, its essential for any future buyers to ensure their purchase is in line with current rules and regulations regarding real estate purchases. (Listings of homes for sale in Kayakoy.) 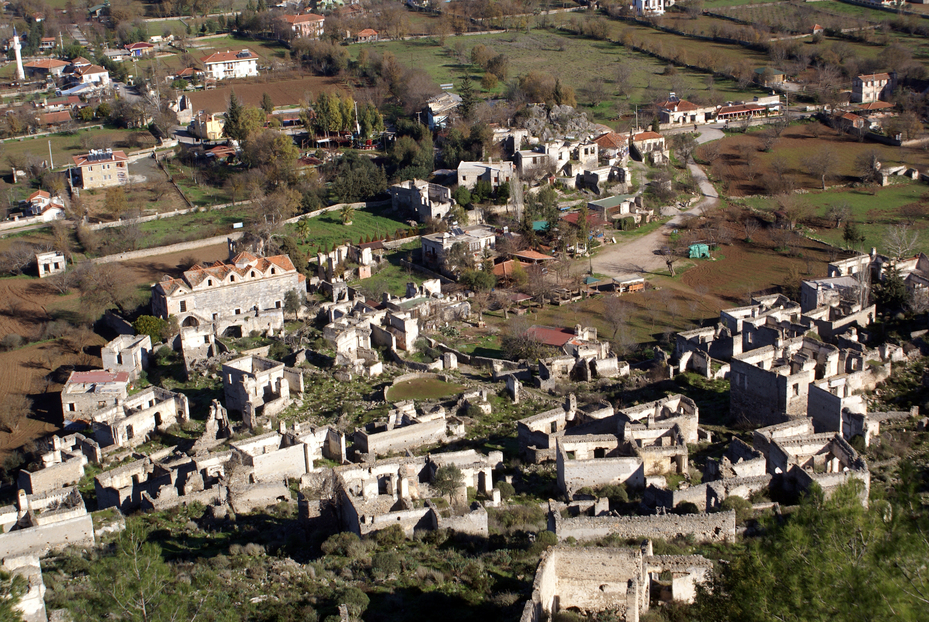 Fethiye Area Guide: Exploring the Fethiye region is a delightful adventure into a tourism and property hotspot of Turkey. In this article, we look at shopping, nightlife, things to do, and reasons why visiting Fethiye will be the best thing you will ever do.