About Turkey About Izmir

The first thing to know about Izmir is the youthful population, and the growing economy thrives every year. Packed full of mosques, traditional restaurants, fascinating museums, bazaars, and historical sites, the name refers to the city centre and the larger province. The municipality pumps millions into infrastructure and tourism, ensuring Izmir’s status as one of Turkey’s tourism giants. This prosperous region offers every modern amenity and a good dose of culture and history, as well as some of Turkey’s best hospitals, top schools, quality, affordable housing, shopping malls, health centres, sports facilities, cinemas, and theatres.

About Izmir in Turkey

The Izmir province covers a large area on Turkey’s west coast. The urban area extends along the Gulf of Izmir and inland and north across the Gediz River delta. Heading east, Izmir extends along a large plain, and south stretches over hilly terrain. Not including outskirts towns and villages, the city centre comprises eleven metropolitan districts. Most were once small villages but amalgamated. Still, each neighbourhood offers distinct flavour and attractions.

Picturesque Izmir enjoys a typically Mediterranean climate, with long, hot, dry summers and mild, rainy winters. Izmir averages around 69 centimetres of rain each year, with most rainfall occurring between November and March and very little rain falling between June and August. During the winter months, temperatures range from 10-16 degrees Celsius. Snow sometimes occurs from December to February period, although it is scarce. Summer temperatures soar to as high as 40 degrees Celsius, although the average maximum ranges between 30 to 35 degrees.

Turkey’s third-largest city was once known as Smyrna, an ancient and powerful hub. Originally belonging to the Lydian Civilization, after the Persian empire destroyed the city in 545 BC, Alexander the Great rebuilt it. Izmir then came under Roman-empire rule. By 1389, the Ottoman Empire took control, and Smyrna flourished for many decades. Unfortunately, during the Turkish war of independence in 1923, when Allies occupied, a blazing fire burnt most of the city. This was when the name changed to Izmir. 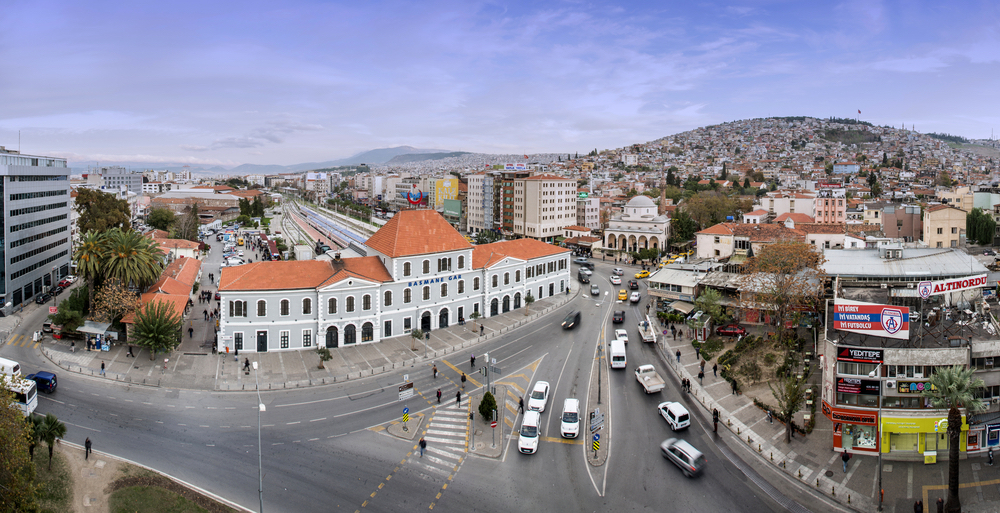 How to Get Here

Bus companies run to many places all over Turkey from the main otogar. Still, many overseas travellers arrive via the Adnan Menderes international airport, which has flights to and from many other countries. Izmir hosts many cruise ships, and naturally, given its seaside location, some yachts arrive via the seas and dock into the Cesme marina.

Given Izmir’s large size, the municipality has invested millions into an efficient transport network. Ferries are a favoured form to get about while yellow taxis stand on the most prominent street corners. Small buses run cheap and frequent routes around the central metropolis and to and from surrounding districts. Otherwise, hire a car from the airport or many excursion shops.

Eating Out and Nightlife

Put aside the typical stereotype for Turkish cuisine of a kebab and Turkish coffee because Izmir’s multicultural hub features many culinary delights. Bars, restaurants, and cafes enjoy a roaring trade, and every foreigner would do well to let their tastebuds explore. As well as international cuisine, try the local dishes of Izmir kofte, Boyoz, Sambali, Tulum cheese, and Kumru. The lively Alsancak district and Kordonboyu are the best places to eat fish, stroll along the promenade, and watch the sunsets. Izmir’s varied nightlife ensures everyone finds a niche to suit them.

Main Sights and Things to Do

Izmir offers a bountiful range of things to do for everyone, young and old. A great place to start sightseeing is Konak old district, home to the famous clock tower monument. Nearby sits the Kemeralti bazaar, an old shopping district and the best place to buy a souvenir or two. Visit the ancient agora ruins, the Kadifekale fortress for a fantastic panoramic view, and the Asanor terrace for stunning views and delicious meals. Let us not forget the favoured Turkish baths, known as a hamam, for relaxation and prepping your skin up for a golden tan. We delight in a day trip to outskirt districts for exploration because of Izmir’s diversity and variety. The Pergamon excavations, which unveiled a vast city, are a popular day trip. More about fun things to do in Izmir. 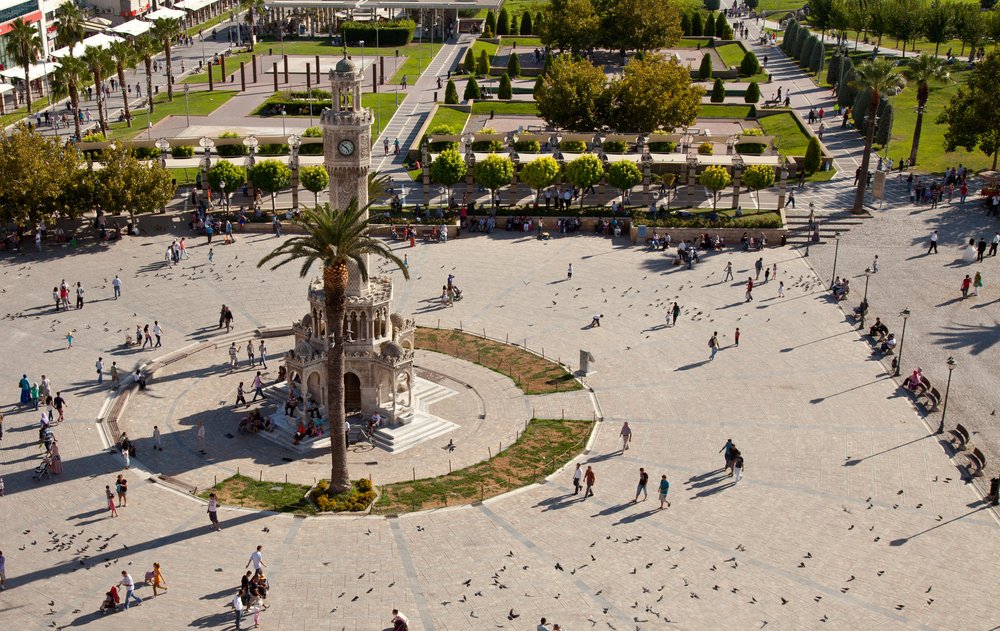 Izmir belongs to the Turkish riviera, and yachting cruises are popular. If sailing is your main reason to visit Izmir, base yourself in Cesme. Take a daily boat trip from the harbour to explore the coastline. Additionally, ferries run to Chios Greek Island, from this mainland area. Other marinas include Alacati and Levent.

One reason, cruise ships dock into Izmir is a daytime excursion to Ephesus in the Seljuk district near Kusadasi. In ancient times, this inhabited city nearly rivalled Rome; such was its importance. Explore the large gladiator theatre, Celsius library, roman terrace houses, agora, temples, and other monuments left behind. These days, Ephesus, a UNESCO World Heritage site, is a top visited attraction for many tourists on a trip to Turkey. Worth seeing nearby are the Virgin Mary’s house, believed to be the place of her ascension and the Temple of Artemis that was one of the seven wonders of the ancient world. What to see in Ephesus.

Anyone visiting Turkey and Izmir should pick Cesme and Alacati as a place to stay for two nights. Sitting side by side, for many decades, they have been popular retreats for Turks and a place to buy summer holiday or retirement homes. Think rooftop terraces overlooking the Aegean-sea, and whitewashed houses, many of which feature the traditional blue balcony. Alacati holiday resort, known for windsurfing and the annual herb festival, features Izmir’s best hotels, including deluxe boutique versions. More about the famous Turkish town of Alacati. 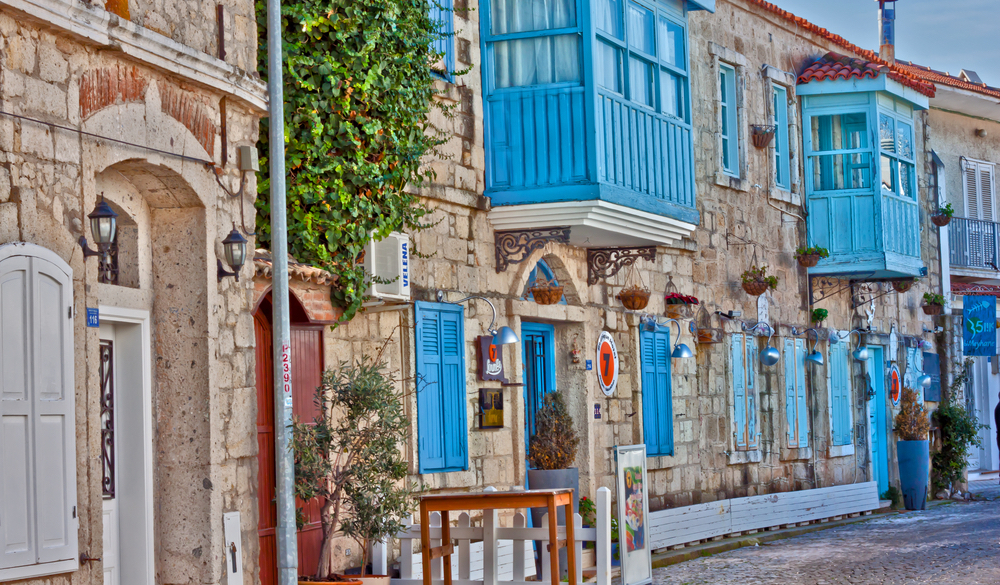 Izmir’s property market constantly revolves around buyers and sellers. Many Turks retire here and invest in the housing market. These days, modern new developments take pride of place attracting buyers from all over the world, some of who want to take advantage of the citizenship by investment scheme. If you would like to buy property in Izmir, browse our portfolio of apartments and villas for sale. Each listing contains everything to know, including contact details to find out more or arrange a viewing. Also read excellent reasons to buy property in Izmir.