The beautiful abandoned village of Kayakoy has a mysterious, eerie quality. The 350 residences, as well as a church and a school, was abandoned by its Greek inhabitants in 1923, during the population exchange which saw many Greeks leave for Greece.

Although the village has been abandoned for little less than a century, the weather and the elements have eroded Kayakoy's houses down to bare shells, making the ruins seem ancient. The site is now a UNESCO-recognised destination, a kind of open-air museum.

You can find Kayakoy in Fethiye, Turkey. It’s rarely busy, so it’s a great place to reflect while escaping the tourist crowds on a sunny day. You can also read about the town and the population exchange in Birds Without Wings, Louis de Berniere’s fictionalised account of the population exchange, or watch Russell Crowe’s The Water Diviner for a Hollywood take on this beautiful ruined village. 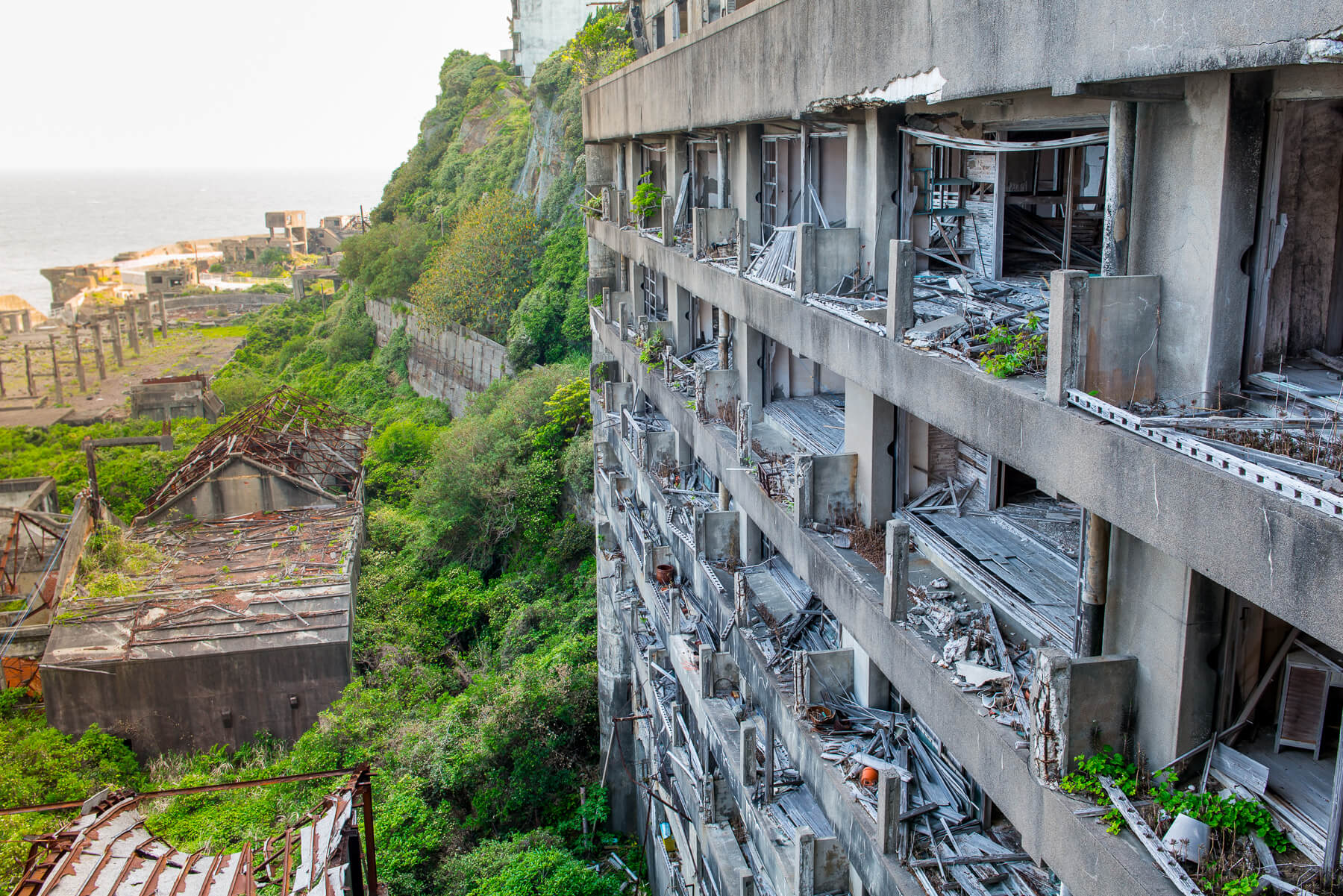 If this island looks a little familiar it’s because you’ve probably seen it on the silver screen: it was Bond villain Raoul Silva’s lair in Skyfall. The island, around 15 kilometres from Nagasaki, was a coal mining facility from 1887. At its peak the island’s population reached 5259 people, in 1959. However, when petroleum began to replace coal as a fuel source throughout Japan, the work dwindled and then finally, in the 1960s, Hashima was abandoned altogether.

Its crumbling edifices mean it’s not the safest tourist destination, but in 2009 tours began to a safe part of the island. Tour groups can see the way people once lived on the island in surprisingly intimate glances - dusty televisions and crockery in place, as if the quiet buildings are waiting for their owners to return.

Looking for a source of rubber for his car processing plants, car magnate Henry Ford bought a huge tract of land in the Amazon and built an American-style village in the middle of the jungle, modestly naming it after himself.

The ambitious project included a golf course, a library, hospital, shops and restaurants. Unfortunately, mismanagement and applying an American way of life to the Brazilian rainforest ultimately ended in failure.

Now the derelict buildings sit empty, visited only by a few intrepid travellers keen to pay homage to this folly of capitalism. 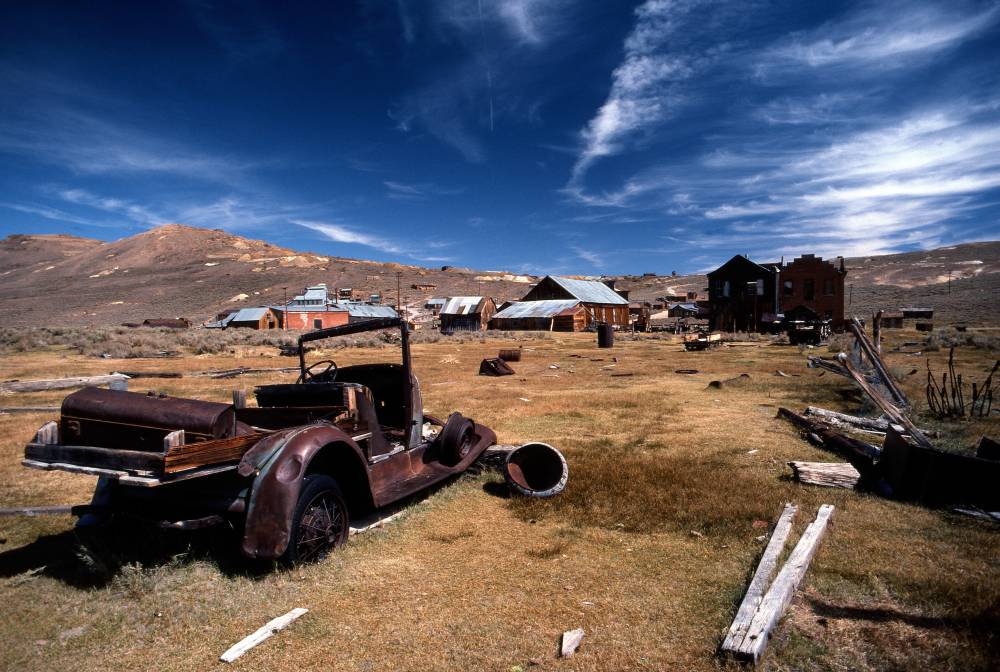 Bodie sprung to life in the 1880s after the discovery of nearby gold by one William Bodey. At its height, Bodie had 2000 buildings, a mile-long Main Street with an impressive 65 saloons, and a population of around 7000 miners, store owners, prostitutes, criminals and gunfighters. However, as the mining industry declined, so did Bodie’s population. Miners began to drift away, and by the 1940s the town was empty.

Unlike some of the other ghost towns on our list, Bodie has been beautifully preserved and is now a historic landmark, visited by thousands of tourists each year who travel the slow, dusty 20 kilometre road from State Highway 395 to visit Bodie’s remaining 200 buildings and peek inside the dusty interiors to catch a glimpse of the giddy, lawless days of the gold rush. 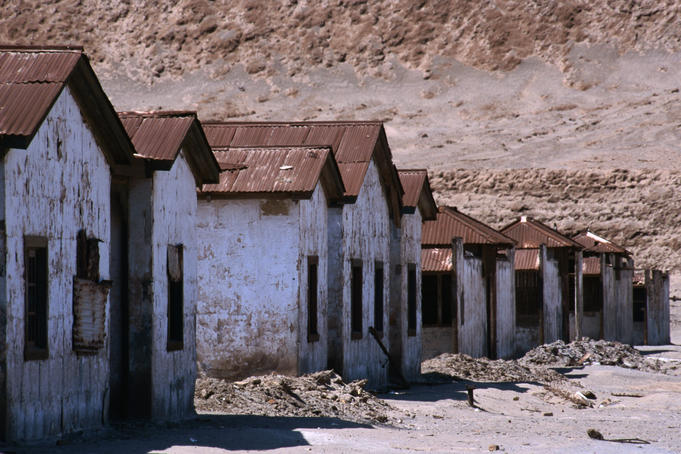 The two saltpeter works of Santa Laura and La Palma were founded in Humberstone in 1872, when this part of Chile was still part of Peru. The works and surrounding towns grew quickly, with buildings constructed in a striking English style.

However, new advances in fertilisation took the spotlight off saltpeter, and both works went into decline, before finally being abandoned in 1960. In 1970, both were declared national monuments and opened to tourism. Both towns were recently declared UNESCO sites in 2005, and tourism flourished. 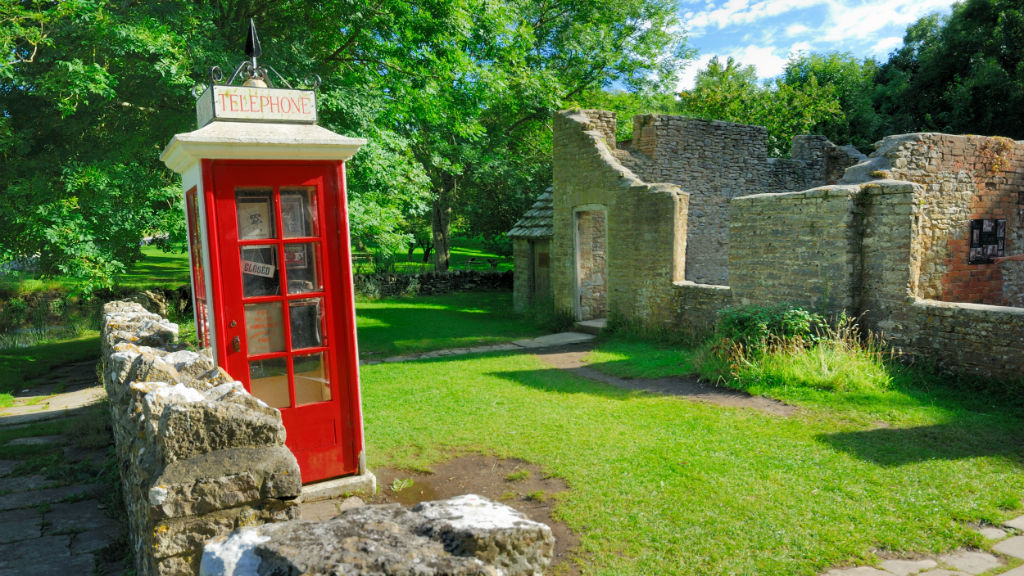 The village of Tyneham and a large swathe of the surrounding area were comandeered by the War Office in 1943 as a training ground for troops. The 225 villagers were displaced, intending to return home after the war ended. However, in 1948 the army placed a compulsory purchase order on the land and it’s been used as a military training ground ever since. However, in 1975 the Ministry of Defence began opening the village and footpaths at the weekends, and the school and church have been turned into museums. 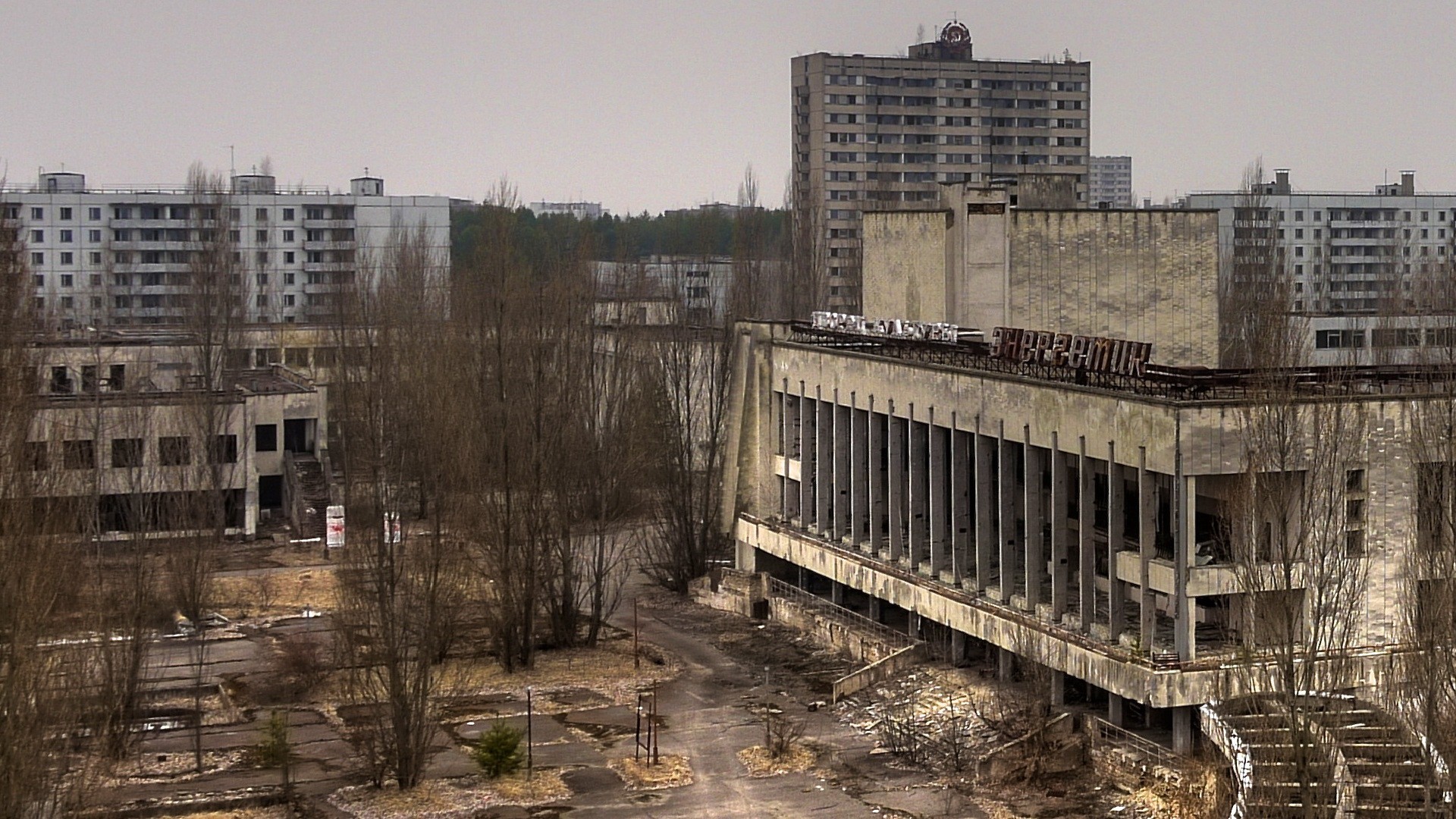 Prypiat’s 50,000 residents abandoned the worker’s town in 1986 when the nearby Chernobyl power station went into meltdown. After a few years when radiation levels became safe, tours began to the town. Visitors can walk through the empty, debris-covered Palace of Culture, peer into the cracked and crumbling Olympic pool, and explore the empty classrooms of a large school. There are also a large number of abandoned factories, shops, cultural centres and government buildings. Wildlife has flourished in the town and it’s common to spot wild bears, wolves, boars and a multitude of birds. 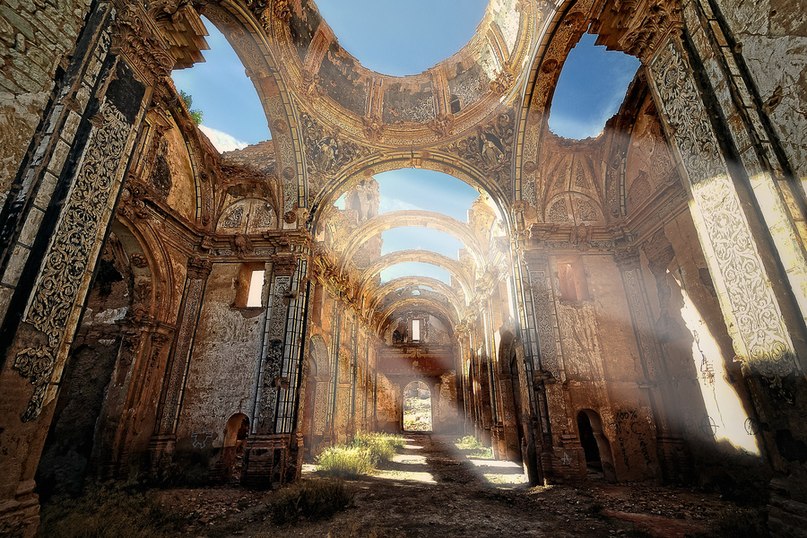 If you’ve seen The Adventures of Baron Munchausen or Pan’s Labyrinth you might recognise this haunting abandoned village. In 1937 Spanish Republican forces clashed with rebel General Franco’s army in the Battle of Belchite, in and around the town. The fierce fighting drove the population away.

A new village was built nearby a few years later, not far from the ruins of the old one. No one returned to Belchite, and it has been left standing as a memorial to the war. 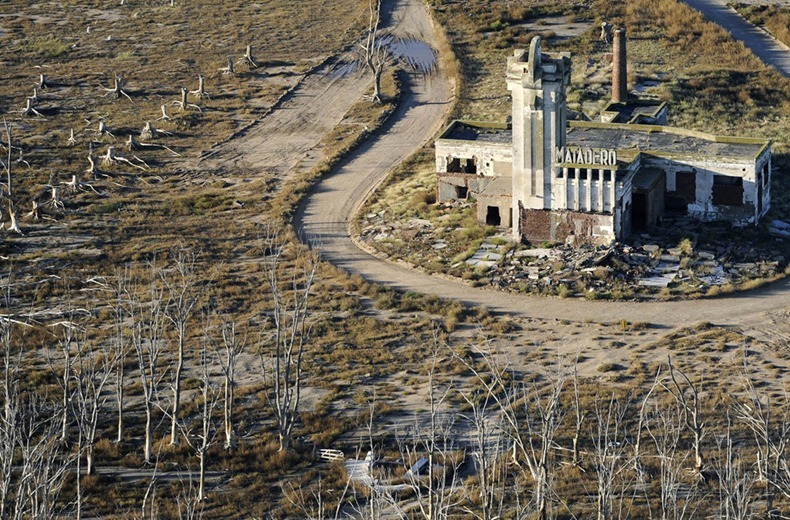 The modern-day Atlantis of Villa Epecuen was once a thriving tourist town a short train journey away from the Argentine capital Buenos Aires. Developed in the 1920s, it was popular with city dwellers who visited the lakeside town to submerge themselves in the salty waters of Lake Epecuen.

In 1985, however, Epecuen’s fortunes changed forever. A rare weather event caused a nearby dam and a dike to break, causing lake levels to rise rapidly, submerging the town, with its many homes and 280 businesses, under 10 metres of water. The town was never rebuilt, and now lies abandoned - except for one resident who moved back when the waters finally subsided after 25 years. 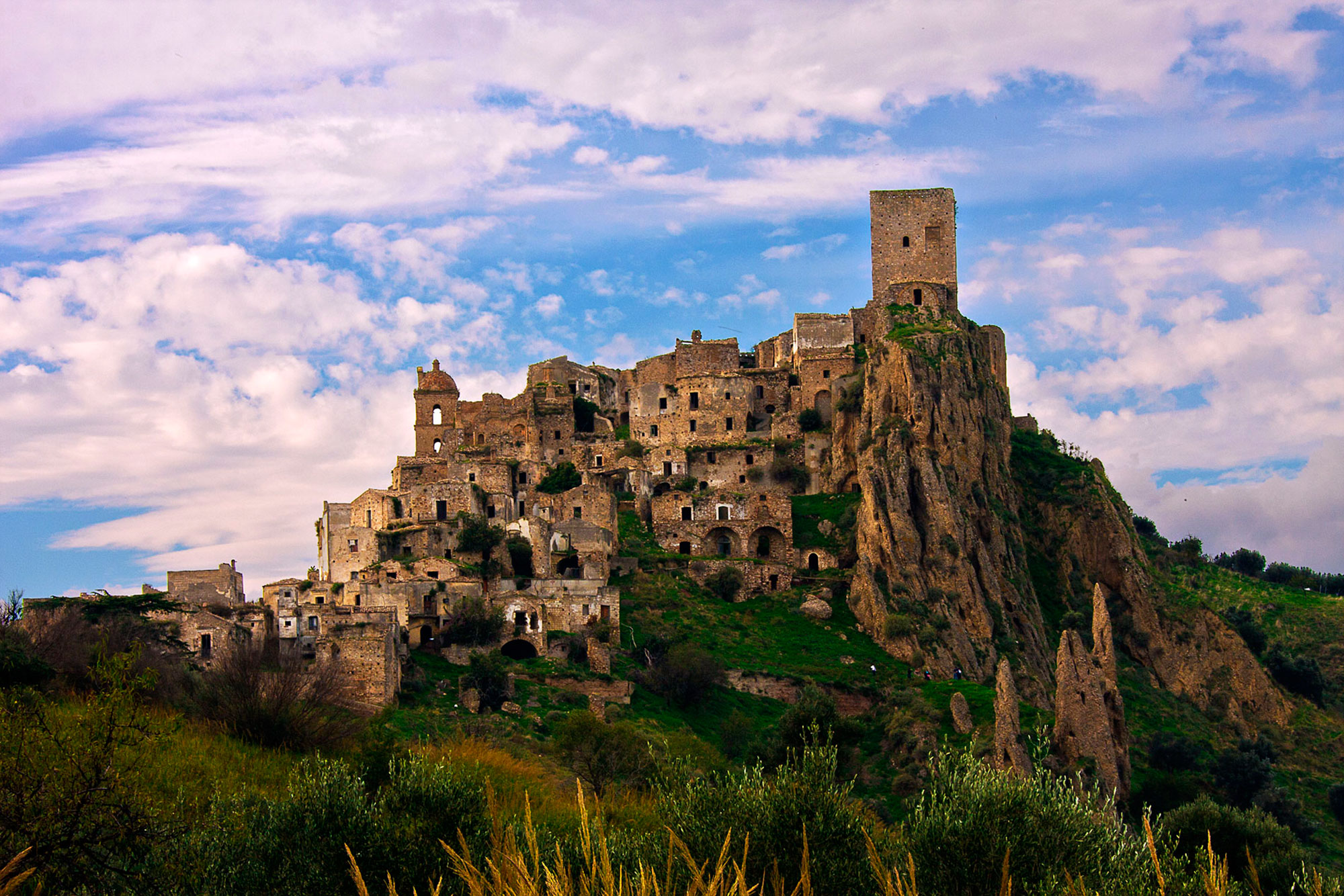 A series of unfortunate events turned this incredibly striking town into a ghost village. Inhabited since the 8th century, Craco perches on a steep summit, its craggy buildings creating a distinctive skyline. The once-prosperous town was once home to a thriving population and even a university.

However, the population diminished in the early 20th century as poor agricultural conditions drove people away. A landslide in 1963 caused further defections, and a flood in 1972 didn’t help matters. The death blow for Craco came in 1980 when an earthquake rocked the site, destroying homes and driving the residents out for good. Its striking appearance has seen the village featured in a number of films, including The Passion of the Christ and Quantum of Solace.