Pink, yellow or green, filled with nuts, coated with sugar - however you like it, sweet, sticky Turkish delight or lokum is renowned across the globe. This decadent sweet dates back at least 230 years and myths around the origins of Turkey’s quintessential treat are almost as sticky as the confection itself. Rarely served as a dessert, it is a palette cleanser, especially when consumed with traditional Turkish coffee. Turks also give it at special events like the end of Ramadan.

Lokum comes from the Arabic word luqmat; the plural of which luqum means morsel and mouthful. An unknown Briton, who became fond of lokum while staying in Istanbul in the 19th century but could not pronounce the name, took cases of it back to Britain and sold it under the name Turkish delight. The delicacy was a massive hit in high-class society Britain and throughout continental Europe. Officials and royalty exchanged pieces of lokum wrapped in silk handkerchiefs. This confectionery has made a name for itself but do not confuse it with the British made version by Cadbury because the results are vastly different.

About the Invention of Turkish Delight

Abdul Hamid might not have been Turkey’s bravest leader - his ill-planned skirmishes with the Russians almost saw the fall of the Ottoman empire- but he knew a bit about women. As legend has it, the 27th sultan who lived three centuries ago had four wives, and a problem that few of us can identify with: how to keep four women holed up together in a palace, happy. Sultan Hamid gathered the Ottoman kingdom’s best confectioners and charged them with a colossal task: create a treat that will keep my wives happy. One cook - Haci Bekir - came up with a dish made with corn-starch, flavours and sugary syrup. He filled it with nuts and dried fruit and won the gratitude of Sultan Hamid - and generations of sweet lovers - forever.

Bekir, who moved from the north to Istanbul in 1777 and opened a shop in Bahcekapi, which is still exists today, run by Efendi’s descendants and bearing his name. He initially sweetened the confection with honey and molasses, and added rosewater, lemon peel and bitter orange to create the traditional pink, yellow and orange flavours. Bekir improved it by adding glucose. Word soon spread, and the Ottoman Empire appointed him chief confectioner to the palace, leading him to achieve prestigious status.

However, Tim Richardson, who wrote Sweets: A History of Candy, is not convinced about the Bekir family’s claim. Richardson believes lokum predates the Bekir’s version by many years and that the Bekir family have claimed historical ownership because of commercial interests. Richardson refers to the Persians, who developed a confection called no rooz meaning new year, to eat. They made this early version of lokum with sugar and corn-starch, and cut it into cubes. Neighbouring Greeks have also laid claim to lokum, with Cypriot sellers calling the confection Greek delight.

Not a lot has changed since Bekir made his improvements. The classic flavours are still rose, lemon, mint, and mastic. The biggest seller, however, is a plain jelly lokum with pistachios. Another favourite is nuts and dusted with desiccated coconut. Sold all over the world, it is a timeless classic, and both Churchill and Napoleon loved it. Picasso ate it to improve his concentration. Some rumours say it inspired jellybeans and gummy bears because they have a similar consistency. These days, many people buy the store-bought, packaged versions as souvenirs. The Turkish town of Safranbolu has also grown an esteemed reputation for their delight, and Beypazari, whose local mascot is a carrot, even makes a version with that flavouring. 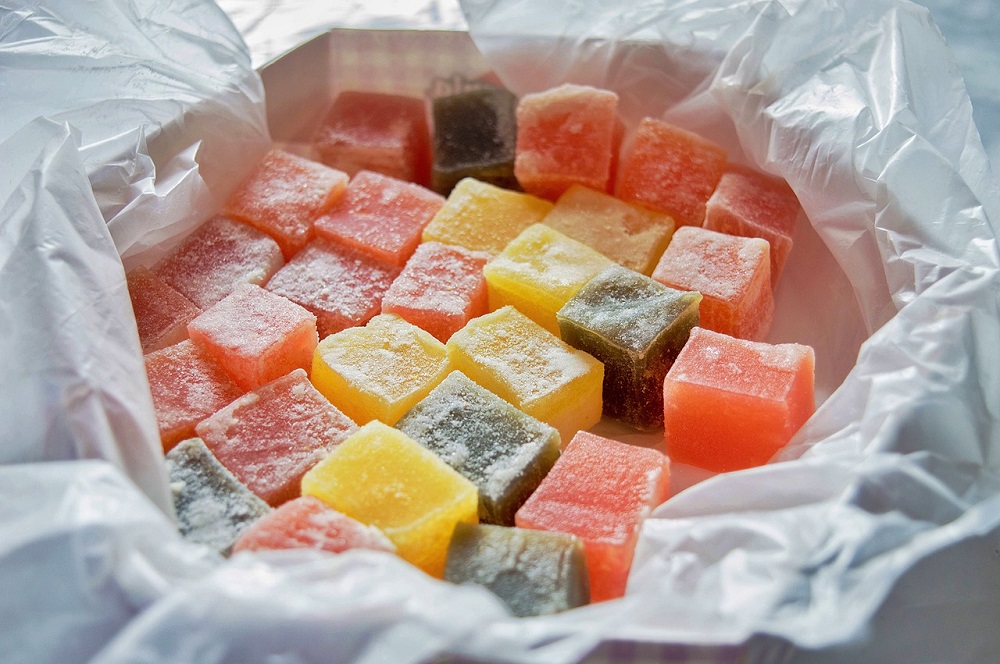 In the Mystery of Edwin Drood, Charles Dickens has enticer Rosa Bud perform an erotic striptease as she eats Turkish delight, licking the white powdery sugar from her finger. However, a massive boost in foreign popularity happened in 2005. There was a spike in sales after the release of the Chronicles of Narnia: The Lion, The Witch, and the Wardrobe. In the film (an adaptation of CS Lewis’s bestselling book), the snow queen lures Edmond with it. Lewis wrote that Edmund thought only of trying to shovel down as much delight as he could, and the more he ate, the more he wanted, because it was so addictive.

How to Make It Turkish Delight

Want to make your version? See our infographic, which explains the process from start to finish. You do not need gelatine to do it, although a thermometer ensures the best results. The essential ingredients to start with are rosewater, granulated sugar, corn starch, food colour, a teaspoon of lemon juice, cream of tartar, your flavouring and icing sugar.

First, line a square baking tin with parchment paper and lightly oil it. Boil the sugar with lemon juice to dissolve it. In a separate saucepan, mix the corn starch, cream of tartar and some water. Pour the sugar water over it and stir well. Simmer for about an hour to thicken it, while making sure the sugar does not stick. Take it off the heat. Stir in food colouring and choice of flavour. Pour it into the lined tin to set overnight in the fridge. The next morning, turn it onto a cutting board and with a sharp knife, cut it into equal-sized squares, dust with sugar and enjoy.

Assorted flavours are perfect for adventurous tastebuds, although de-shelled and finely chopped pistachio nuts are a firm favourite with Turks. Some people sprinkle finely chopped and toasted coconut over the top to add additional flavouring. The result should not be brittle or firm like toffee, nougat, or fudge, but a soft, gooey, chewy, or gummy consistency with sweetness. Do not forget to store it in an airtight container, although we are quite sure it will not last long in any family. 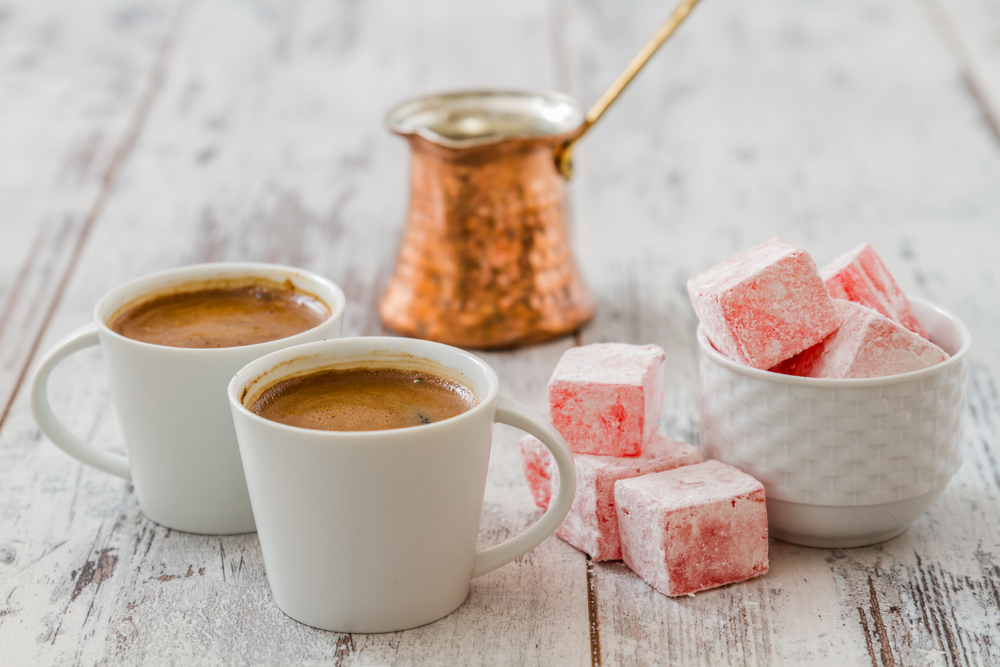 Turkish Desserts to Try: If this article has sparked your interest, Turkish cuisine is much more varied than Turkish delight. From the famous Baklava to the weird chicken pudding, we have listed the top twelve sweet treats you should try.

Turkish Food You Will Love: Let us not make it all about the sweet stuff. Savoury Turkish cuisine has much to offer, and we suggest soups, appetisers, vegetarian dishes, meat classics and other culinary delights that Turks and foreigners adore.