The History Behind Turkish Coffee

Turkish coffee is usually made with “Arabica” however, sometimes “Robusta” coffee beans are used instead. It has become famous around the world due to its distinct accessories, strong taste and preparation methods. Also the many different ways it can be served and the way it is presented. 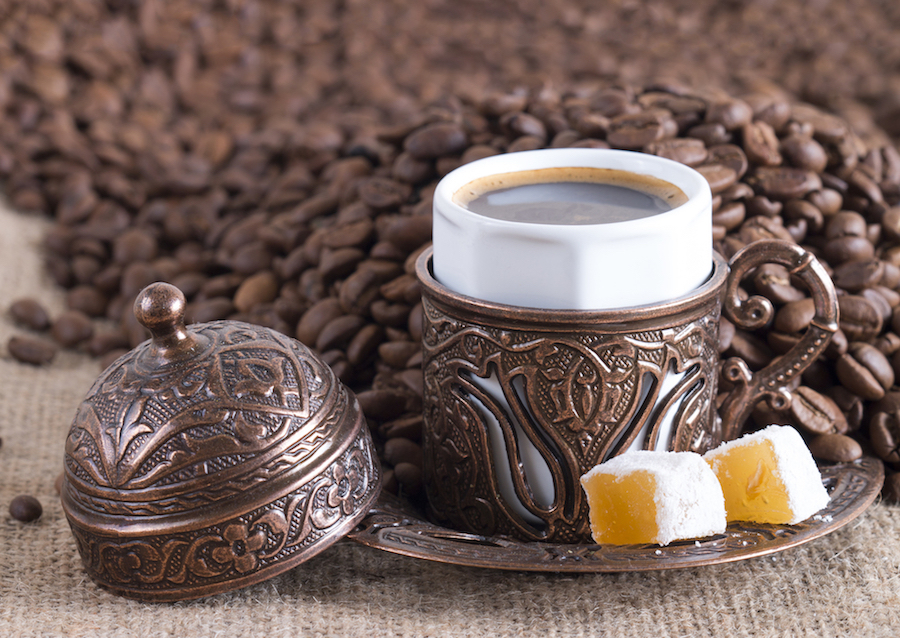 So when did coffee first enter Turkey?

It is said that there are two stories to how coffee first entered Turkey but, there is no evidence to show which story is valid.

In 1521, the Ottoman ruler of Yemen, Ozdemir Pasha, learned Yemeni coffee preparation in an attempt to win over the Ottoman Sultan, Suleiman the Magnificent. He personally dedicated the coffee to him. Coffee was considered one of the most expensive drinks at the time. Hence, Sultan Suleiman expressed his admiration of this drink by issuing a royal decision sealed with the royal stamp to adopt it and that’s how it spread.

This story is completely different from the previous one. It is said that two Syrian traders, the first is called “Hakam” from the city of Aleppo and the other one is named “Shams” from the city of Damascus wanted to trade coffee between Syria and Turkey. Back then, the Levant, Historical Region of Syria, had already known coffee from Greece. The Greeks got the coffee from Europe and Europeans got it from Africa. In 1554, the two traders opened a shop to serve drinks in Turkey. And then, it entered the Ottoman Palace under the reign of Suleiman the Magnificent, and it was entitled, “Black drink”.

The common factor between both stories is that coffee was first discovered under the reign of Suleiman the Magnificent and it spread all around Turkey in 1555, known as, a royal drink, documented by the royal decree, sealed by the Ottoman’s stamp. 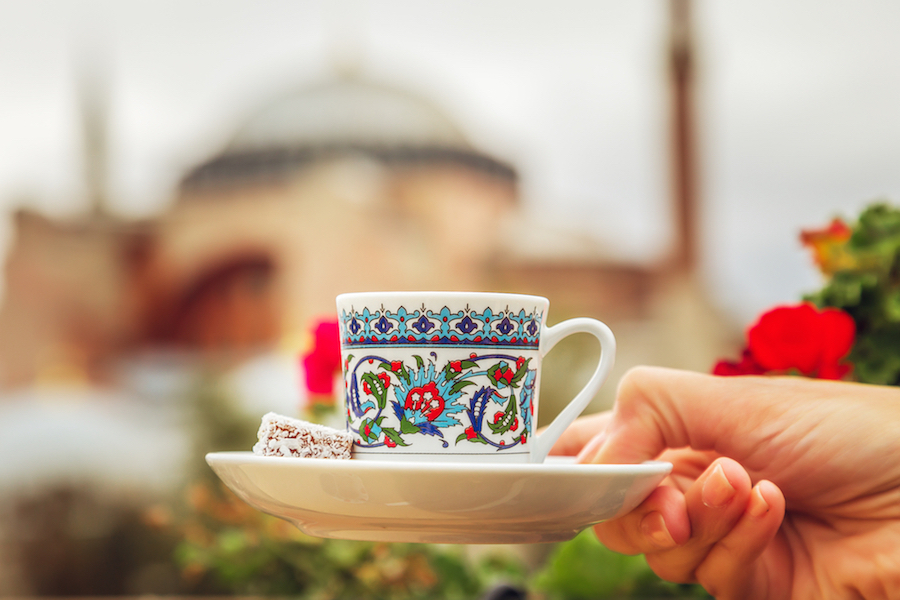 The first coffee shop to exist in Turkey, was founded by Hakam and Shams in Eminonu. This tradition wasn’t wildly circulated in the region until the reign of Sultan Selim ll. Turkish men started favouring this tradition especially, intellectuals, artists, statesmen and people seeking information. They would gather and discuss diverse topics for hours including, politics, religion, economy, poetry and many others. They would even sit there for hours to listen, write and recite Eulogy, poems they wrote to admire the Sultans or love poems. Some students would spend many hours writing their books in these coffee shops. These shops didn’t only serve coffee, they served tea as well and sold tobacco rolls.

During the reign of Sultan Mourad lll, there were more than 600 cafes operating, not only in Istanbul but also, in Anatolia, Konya, Mardin, Gaziantep, and most of Southern and Eastern Turkey, driven by the idea of praising the Sultan.

Later Sultan Murad lV, ordered the shops to close in Istanbul due to the emergence of anti-Ottoman ideas, which he considered, a deviation from the sole purpose of these coffee shops, which was to praise the Sultans, and declared it a threat to the State.

The Golden age of cafes took place during the reign of Sultan Abdel Aziz and the reign of Abdul Hamid ll. During that time, this culture was supported and promoted all throughout Turkey until it reached the world. 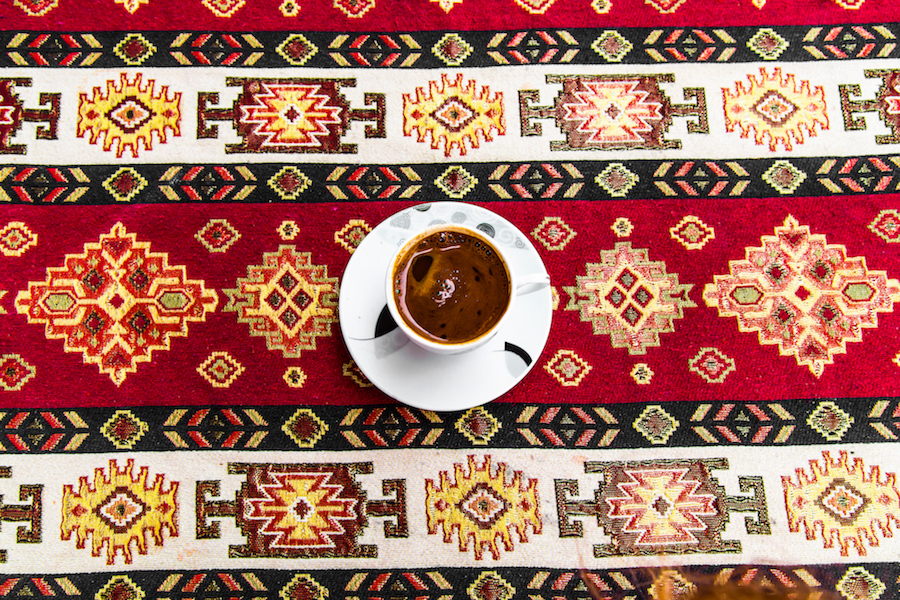 Coffee is an essential element of hospitality during marriage proposals

Coffee played an important role during the customs of marriage in Turkey. It became a tradition to teach girls how to prepare coffee at a young age to train them for that day. On this occasion, the future bride prepares coffee to her groom on his first visit. The tradition said to put salt in his coffee in order to test his patience. On his second visit, the groom’s family inspects how his future wife carries herself, from carrying the coffee to how she serves it. They also analyse how she prepares it, which set of cups and accessories she used and of course, the taste.

The water and Turkish Delight are a must as part of Turkish coffee presentation. The water is used to wash the mouth from the coffee residue. After presenting Turkish Delights with coffee, the hosts usually offer fruits or food to their guests.

How to make Turkish Coffee?

Turkish Coffee is prepared in a narrow and deep copper bowl with a handle made of wood called, “Cezve” or what they call in Syria “the State, Rakwa” and the cup where the coffee is served is called, “fincan” which is the same in Arabic. Also the name “Kahve” is similar to its name in Arabic. As for the ingredients, two table spoons of coffee for each cup of water then mix it well and put it to boil. If you prefer sugar in your coffee it is favoured to add it before it boils. One cube for a light sweet taste, two cubes for a sweeter taste and three if you are into very sweet coffee.

Once the coffee has boiled and its foam has mounted, it should be poured directly into the cup. This is why Turkish coffee is rich in foam. Coffee will not really be considered Turkish without at least half to 1cm of foam. It is usually served with a glass of water and one piece of Turkish Delight. 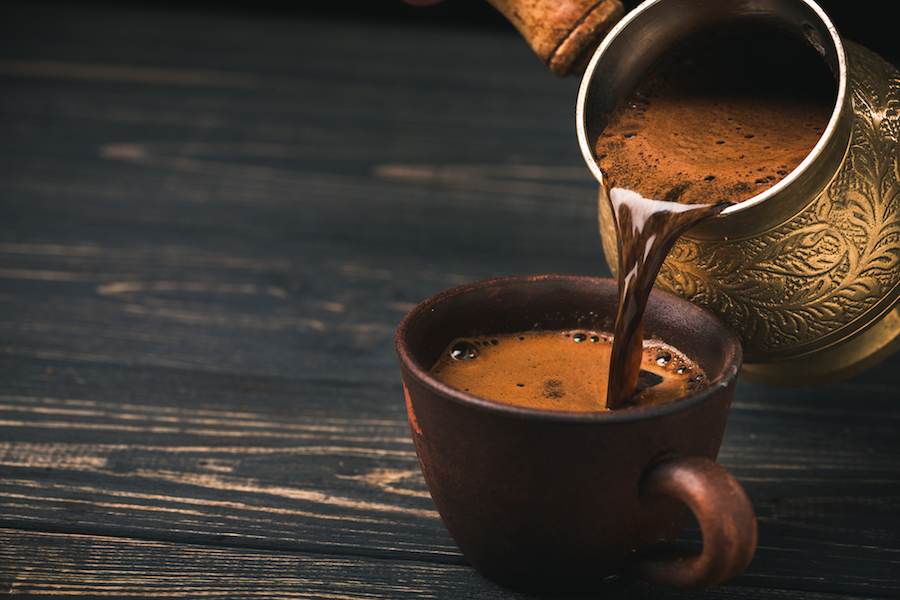 The way Turkish coffee is served, its preparation and its community culture have made it worthy to be registered in 2013 as a UNESCO Cultural Heritage List and recognised as a symbol of hospitality and friendship in Turkey.

The gathering of people in cafes to drink coffee, offer coffee to travellers and visitors as a welcome habit has made it one the most important drinks, served in social events.

Where is the best place to buy coffee in Turkey?

Kurukahveci Mehmet effendi is one of the most famous Turkish coffee suppliers in Turkey, you can find its products in all the supermarkets and shops in Eminonu and it is known for distributing fresh coffee on a daily basis. This brand’s competitor is, “nuri toplar” in Eminonu, which has been around since 1890. It is excellent for those who love a strong coffee taste and it is also considered more luxurious compared to other coffee brands.

Most cafes in Taksim, Besiktas, Ortakoy, and even the closed market cafes or Grand Bazaar are serving thousands of cups of Turkish coffee every single day.

Coffee in Turkey is not just a drink, it's a way of life. 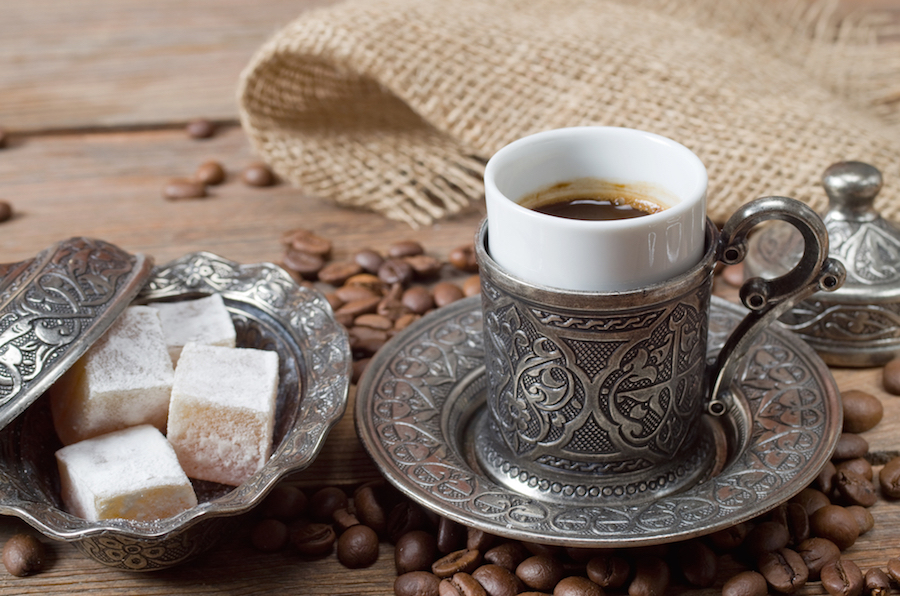