The best family Day Trips to take from Kalkan

Upmarket Kalkan on the Mediterranean coast of Turkey has the distinct advantage of being close to many of the best tourist attractions and sites in the whole of the country. Holidaymakers and expats enjoy the best of both worlds. The resort maintains a quiet, dignified presence leading to a laidback lifestyle, but they don’t have to travel far to explore natural and historical places of interest. Whether they choose to go independently by hiring a car or they sign up with a local travel agent, the wealth of day trips from Kalkan entertains everyone from the younger, more dynamic generations to the older, slow-paced adults.

1: Kekova and Simena by Boat or Sea Kayak (Popular)

During Byzantine times, life in the small city of Batik Sehir was turbulent with frequent invasions by pirates, but then an earthquake submerged it under the sea in the small Kekova inlet. Unable to rebuild the city, locals left for pastures new, and life in the region ceased to exist.

Eventually, scuba diving looters stole many of the underwater remains because, over time, they turned into priceless antiques and artefacts. Authorities discovered what they were doing and banned scuba diving. So, these days, the only methods to see the sunken city walls and houses is by boat or sea kayak, of which you should be physically fit to do the latter.

Afterwards, passengers go on to explore nearby Simena and its Byzantine castle, reached by a long, winding stone path, eventually leading the way to amazing panoramic views of the peninsula. As well as selling souvenirs, local, rustic restaurants make and sell delicious homemade ice-cream with a wide variety of flavours such as banana, watermelon, orange and much more.

Most travel agencies in Kalkan sell this tour, departing from the small village of Ucagiz. It is an all-rounder providing excitement for couples, families, groups of friends and solo travellers.

2: The Magnificence of Saklikent Gorge

The must-see natural landmark of Saklikent Gorge is one hour drive away. Sitting at the foothill of the Akdag mountain range, this 1000-feet high and 18-kilometre gorge in the middle of two rocks is a welcome relief in the height of summer when temperatures reach an all-time high. Most people don’t trek the whole gorge for safety reasons but instead, walk 150 metres along a wooden platform to arrive at the fast-flowing river and viewing platform, a favourite stop for photographs.

Rent waterproof shoes from the entrance booth and nearby rustic restaurants also sell the meal of the day menus, which naturally being aside a river is fresh fish. To extend this into an overnight trip, nearby campsites and tree house hotels employ local guides who are brimming with knowledge. Otherwise, most day trips from Kalkan sell it as a jeep safari tour or combine it with a trip to the nearby ancient city ruins of Tlos. 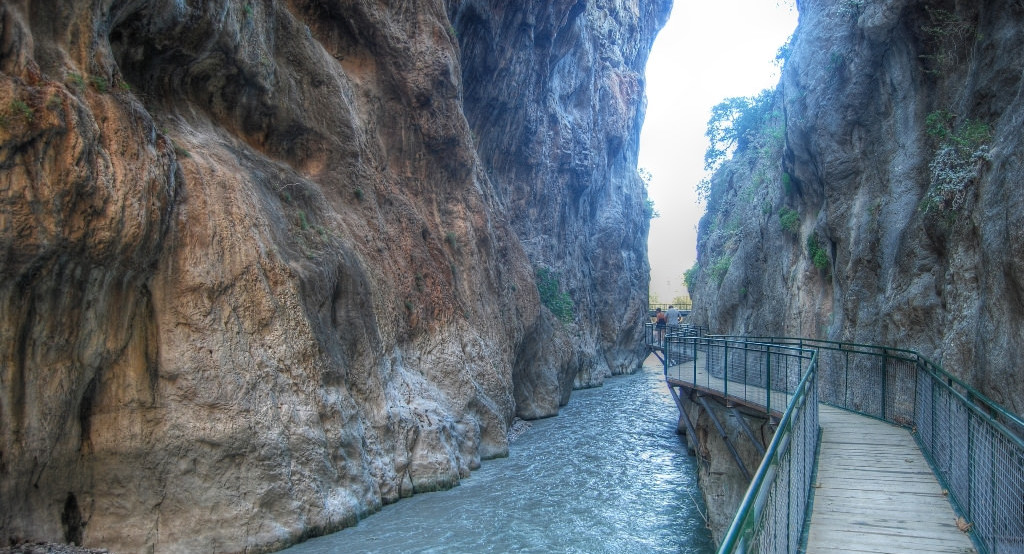 Just 30 minutes’ drive from Kalkan, is Patara, a small, rustic village, with ancient city ruins and the longest beach in Turkey. Most day trips from Kalkan sell it as either quad biking or horse riding in the national park and on the beach but shop around, if you want more time to explore the historical ruins. Patara beach garners fame for two other reasons as well. The endangered Caretta Caretta turtle uses it as a nesting ground, and the wind conditions lend weight to excellent windsurfing conditions.

4: Visit the Greek Island of Meis

Our personal favourite day trip from Kalkan is the short ferry ride across to the Greek island of Meis. Departing from the neighbouring resort of Kas, passengers get off the ferry to discover a quaint, beautiful and peaceful village with of course, everything Greek! Feasting on food in the harbourside tavernas is an adventure for curious taste buds, but also wander the back streets or head to the castle for a stunning landscape view.

We, however, mostly enjoyed our trip to the Blue Cave. Small boats at the harbour sell seats, and once they are full, travel around the island to a small inlet of a large rock. The entrance is extremely shallow, so passengers lay down in the boat, before eventually drifting into the large cave, to see stone walls bathed with light from the blue still waters. 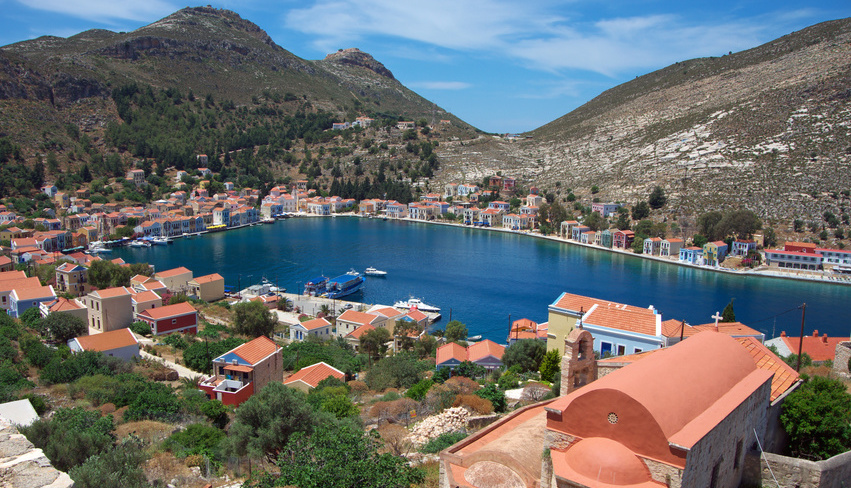 Naturally, being a seaside location, day boat trips in Kalkan are a favourite activity for everyone, especially families. Many boats sell single tickets including lunch and stop off at various points around the coastline for swimming and snorkelling breaks.

However large groups of friends or families should hire a private boat to set your own course and agenda for the day. Fishing fans should also shop around for the sunset and day fishing trips, where rods and equipment are available for hire. 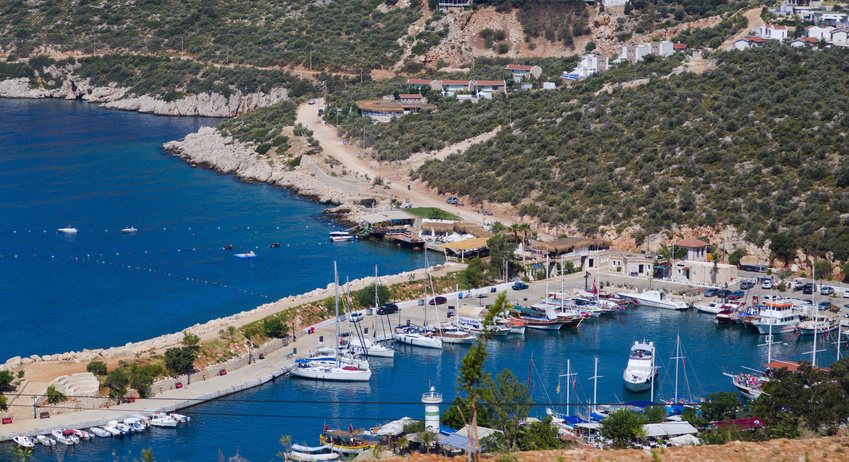 Repeat visitors to Kalkan or those who don’t mind travelling a little bit further to many top-rated tourist attractions and delights may like the following suggestions.

1: An hour’s drive away, the Fethiye Peninsula is one of the most beautiful places in Turkey. As well as touring the Lycian rock tombs in the city centre, a must see is the old ghost village of Kayakoy. Housing Turks and Greeks living side by side before the Turkish war of independence, it is now an eerie collection of abandoned houses, deserted churches and quiet stone cobbled paths. Also visit the Blue Lagoon in Oludeniz, one of the most photographed beaches in Turkey and a perfect place for a swimming break. 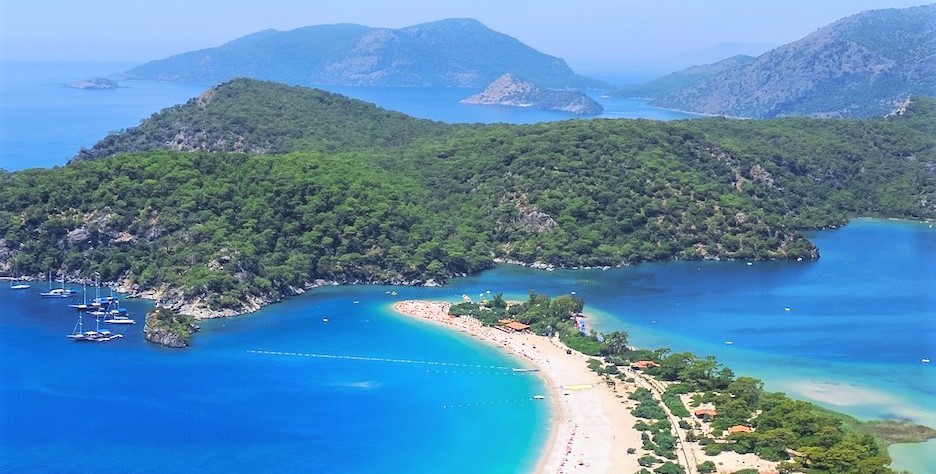 2: Head east from Kalkan along the coastal D400 highway for one hour to eventually arrive in Demre. This location is worth seeing for two reasons. The first is the ancient city ruins of Myra and its impressive grand theatre. Coming further back into town, is the church of Saint Nicholas, otherwise known as Santa Claus. He was the bishop here, and his tombs sat within a separate section of the small church before Italians sailors stole it because of his iconic status.

3: Dalyan is a two-hour drive away and despite its favoured status on the tourism scene of Turkey, maintains a traditional, rustic ambience. Small boats travelling up the reed-lined river are the perfect vantage point for an impressive view of the Lycian rock tombs. Also on the agenda is Iztuzu beach, a protected area because of the Caretta Caretta turtles laying their eggs in the sand. Lastly, take a dip in the mud baths and sulphur spring water pools. Urban legends say it is a natural anti-ageing, but we like splashing around in mud regardless.

4: Three hours away, the natural calcium pools of Pamukkale and the nearby ancient city ruins of Hierapolis, are Turkey’s second most visited tourist attraction. Pamukkale is one of Mother Nature’s perfect inventions formed by calcium water flowing down the hillside before solidifying into middle size pools hence its nickname of Cotton Castle. Also, swim over fallen Roman columns in the nearby Cleopatra’s pool before seeing ancient statues and sarcophagi in the museum. Lastly, explore the ruins and especially large theatre of Hierapolis, an old city used by Roman soldiers as a spa healing centre. 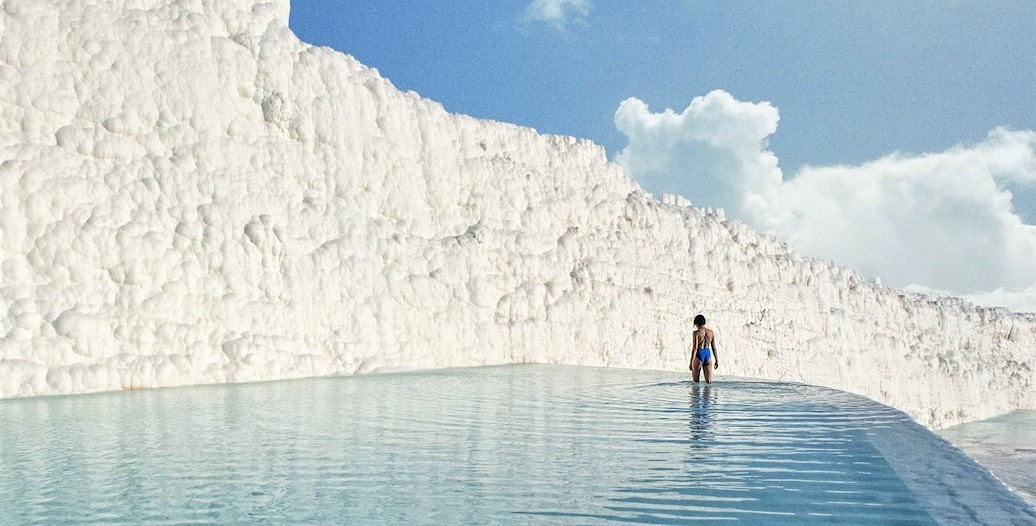 Further Reading: You might also like to read our travel guide to Kalkan, with lots of useful information about the weather, how to get there, accommodation and eating out.