The Mediterranean coast of Turkey is everything you can imagine and much more. The ideal weather climate and a comfortable lifestyle all blend together to provide an atmosphere welcoming everyone, young or old. Such is the lure, it is a major holiday destination for many nationalities including Brits, Russians and East Europeans. They visit many of the popular coastal holiday resorts of which one is prestigious Kalkan, belonging to the Antalya province. 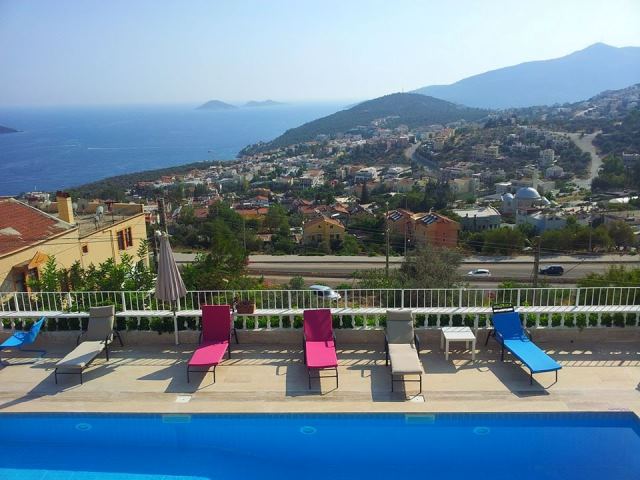 Kalkan fits the bill perfectly as one of the more luxurious places in Turkey. Although budget food and hotels are available, much of the social life in Kalkan focuses on fine dining, luxury accommodation and enjoying the spoils of the Turkish Riviera. The main town centre is hilly so people with walking difficulties may struggle to get around, but this geographical landscape also lends itself to fantastic sea views, particularly at sunset.

Although Kalkan has embraced modern living, Turkish culture and traces of its history as a Greek village are still visible. Old white, stone houses in the old town, portray the typical Mediterranean buildings with wooden shutters covered by flowing pink bougainvillaea. As is expected from an ideal Mediterranean destination, the vibes are incredibly laid back, and anyone looking to relax and rejuvenate will be able to do exactly that.

How to Get to Kalkan

Foreign visitors use one of two airports. Dalaman is 90 minutes’ drive away and is most frequently used during summer because there are regular international flights. Antalya Airport is 3 hours’ drive away, and expats living in Kalkan will use this option if they don’t have any connecting flights to Dalaman. The resort also connects to the cross-country bus system, either directly or through buses in Fethiye or Antalya city centre. Many expats in Kalkan also use car hire because their home sits just off the recently improved, central D400 coastal road connecting the east of the country with the West.

Tourists have a wide choice of hotels to choose from including budget bed and breakfast in the heart of the old town to luxury all-inclusive on the outskirts. However, the trend in Kalkan is self-catering, luxury villas in Kalkan. A look at the portfolio of possibilities shows most villas are well furnished, incorporate trendy architectural styles, include new amenities and infinity pools. Rental companies also manage some of them, so services such as cleaning, and welcome packs are much-needed extras. 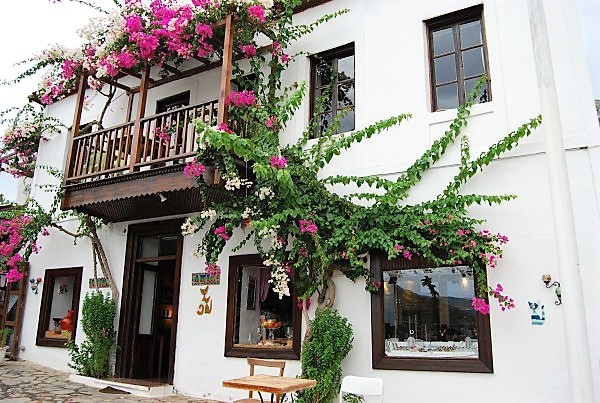 Kalkan officially has a hot-summer Mediterranean climate. Daytime temperatures during July and August can reach as high as 40 degrees, while January and February become the rainy season. People who like touring or hiking would do well to visit from March to June, or October and November when temperatures are average. Typically, from June to September, night-time temperatures are also warm hence the al fresco dining scene. If you plan to visit during summer, wear sun cream and drink lots of water to prevent dehydration. 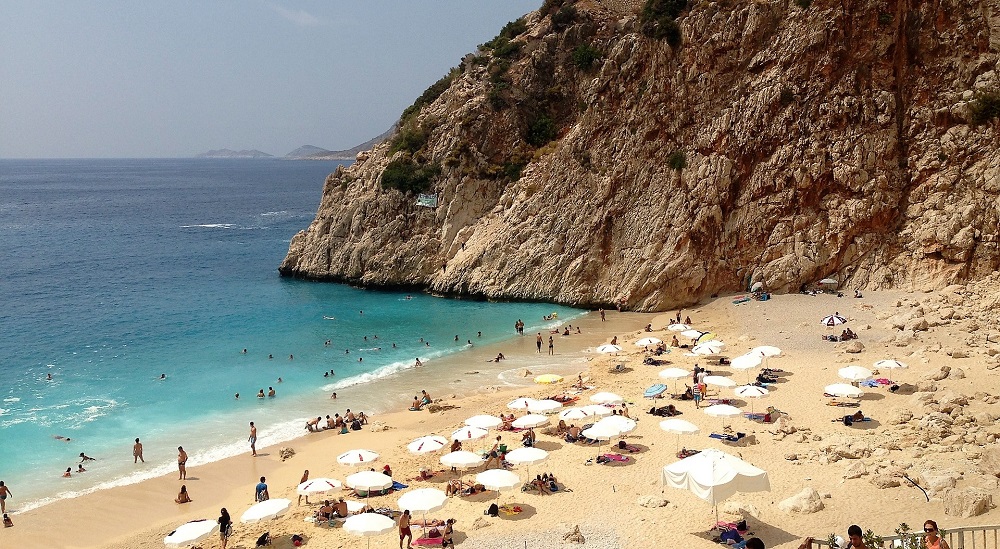 Eating out: Restaurants and Bars

Korsan Meze restaurant has a long-standing reputation in Kalkan having first opened their doors in 1979. As the name suggests, it offers a broad range of Turkish food, specialising in lamb but also includes other classics such as pasta dishes. Naturally being a seaside restaurant, fish is a speciality, and the blue and white décor lend itself perfectly to the Mediterranean theme.

The Aubergine restaurant, with a harbourside location, is another firm and long-established favourite of repeat holidaymakers. As well as serving delicious food, the restaurant has taken on another theme with their comfortable lounge style seating and exotic cocktails.

Otherwise, Iso’s might not look much from the outside, but for years, well-known travel publications such as Lonely Planet, DK Eye Witness Travel and Trip Advisor have listed it as a top recommended place to eat in Kalkan. Run by a local couple, the restaurant, set in an old Greek house on a cobbled street of the old town is a rustic but welcoming introduction to Mediterranean life in Turkey.

What is There to Do in Kalkan?

Sitting 30 minutes away by road is Turkey’s longest and one of the most beautiful beaches. Patara is a favourite nesting ground for the Caretta Caretta turtle but also known for the ideal windsurfing conditions. Visitors combine a trip to the beach exploring the ancient ruins and rural village.

Beach lovers should also head in the opposite direction to Kaputas beach, one of the most photographed in Turkey. Reached by a flight of stone steps, the crystal blue waters perfectly demonstrate the lure of the Turkish Riviera. However, if you prefer history to beaches, you are also in luck, because Kalkan is close to Xanthos and Letoon, a UNESCO World Heritage site, famous for its contribution to the Lycian Empire that once ruled this stretch of coastline.

Many travel agents in Kalkan, sell a popular daytime trip for fit and healthy people. Driving to the small village of Ucagiz, they set off in a sea kayak to glide over the sunken ruins of Kekova, before turning a sharp left to head to Simena. Caretta carreta turtles are the most frequent visitors to the region, but many people also sail into the small harbour to disembark and walk to the long, winding cobbled path to the castle where a fantastic panoramic view of the peninsula wows everyone. Descending the path, they inevitably, end up in one of the basic restaurants run by locals who are famous for their home-made ice-cream of many weird tastes and flavours.

Alternatively, combine Turkish influences with a bit of Greek by catching the ferry boat from the neighbouring resort of Kas to Meis. Also called Kastellorizo, its most famous landmark, the Blue Cave is a memorising travel experience. Kalkan is also part of the Turkish Riviera, and visitors head out on daily boat trips to explore the coastline or make a journey out of it by booking three nights on a traditional Turkish gulet boat.

Scuba diving is also big business in this area with shipwrecks and colourful sea life attracting divers from all around the world. If you prefer to keep your feet on land though, Kalkan is part of the Lycian Way, a 500 kilometre, official trekking route running from Antalya to Fethiye. Generally, taking three months to complete in one go, trekkers can explore separate sections by using Kalkan as a base. 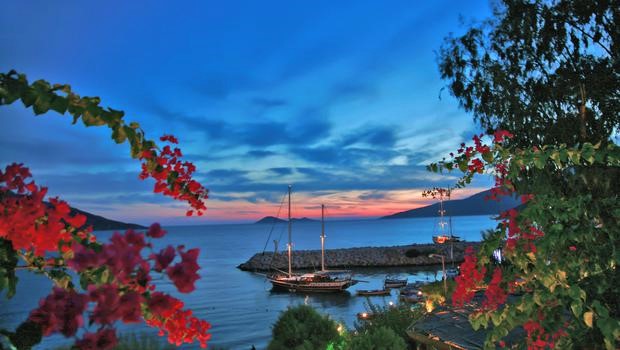 Further Reading: If you plan to rent a property in Kalkan, or explore the option of buying property in the area, our travel guide to Kalkan will come in handy. Listing the various neighbourhoods within Kalkan, it also tells how life is for the many British expats living there.