Guide to the Best Beaches to Visit in Bodrum

Famed for its white sugar cubed houses tumbling down the hillsides, Bodrum on the Aegean coast of Turkey also has another luring attribute. The small bays and caves of the peninsula are home to some of the country’s best beaches making it a popular holiday destination. Those stretches of golden sand, combined with the blue waters of the Aegean and a hedonistic lifestyle of boats and parties have catapulted it into one of the top spots of the Turkish Riviera. Indeed an easy way of getting around all the beaches is a Blue Voyage cruise of the peninsula coastline or a 2-week driving holiday will highlight every bay that this jutting section of Aegean Turkey offers. 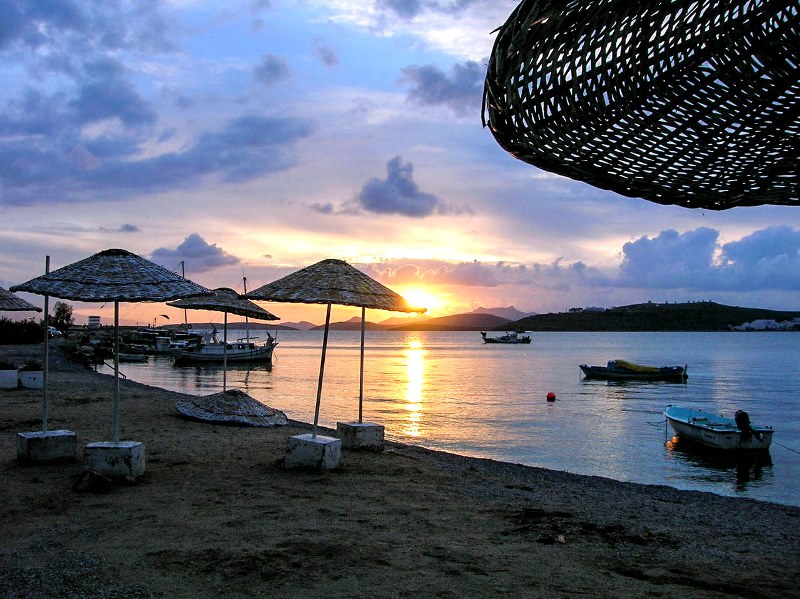 The Best Beaches on the Bodrum Peninsula

Starting in Bodrum town centre, Kumbahce beach, near the castle and marina is 300 metres of sand and blue water. Eateries and bars nearby make it a convenient beach offering everything you need. More popular with Turks, than foreigners, in the height of summer, the overcrowded spaces full of sunbathers can deter from a quiet day at the beach, so instead head out into the peninsula. The neighbouring resort of Gumbet, 2 miles West offers an attractive alternative.

$511,500
4
3
Bodrum
The mainly shingle Gumbet beach, lined with bars, restaurants and rows of sunbeds has sandier sections on the outskirts. Particularly appealing to families with teenagers and groups of friends, water sports are an essential feature, including snorkelling, banana boats, sofa lounge, pedalos, and jet skis. The extensive choice of hotels explains why Gumbet is a favourite beach holiday destination, especially for British clientele.

The older generations tend to prefer Bitez, the next bay heading 6 miles in a westerly direction. Shallow waters and a variety of restaurants; keep sunbathers hanging out on the beach all day long. Just like Gumbet, it runs from one end of the resort to the other, and although golden sand is not an accurate description, the sunbeds touching the waters of the Aegean explain its popularity especially in the height of summer.

Moving around the peninsula, the longest beach in the Ortakent district is Yahsi Sahil that is popular with Turks. From this beach, on a clear day, the Greek island of Kos is visible in the distance. Previously Ortakent’s public image focused on old stone houses and citrus groves, but now locals boast about the incredible sunset seen from the central beach district. While the beach is full during the day, they recommend alfresco dining in the beachfront restaurants, especially on nights with full moon. 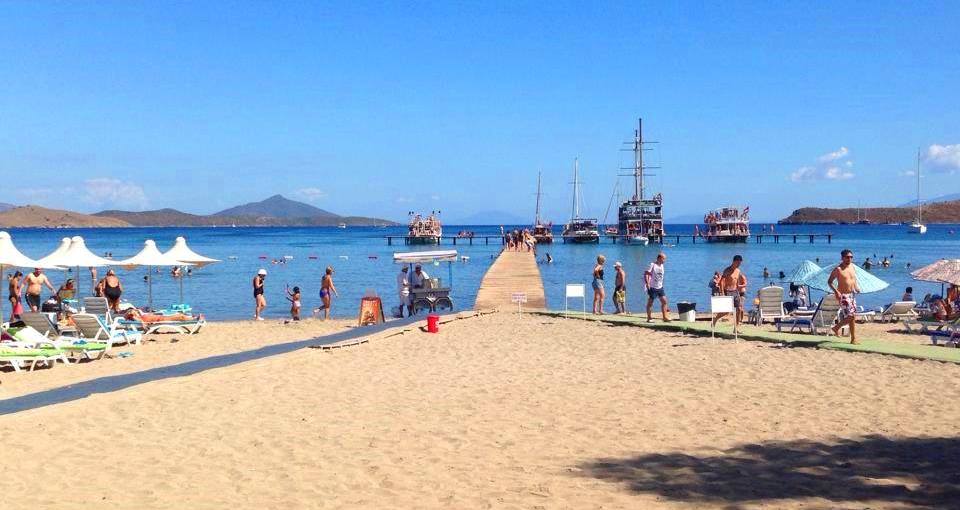 Next is Camel beach, one of the most famous on the Bodrum peninsula. Also known as Kargi bay, it offers the same standards amenities as other beaches such as water sports, sun loungers, bars and restaurants. Yet its hat trick is the camel rides, hence its name. Daily boat trips sailing around the coastline frequently dock in since passengers love the long stretch of sand. This is definitely one of the best beaches on the Bodrum peninsula.

Generally overlooked, the next resort of Akyarlar is devoid of mass tourism but for good reasons since its beach is small. Instead, the nearby 550-metre stretch of sand at Karaincir Bay wins admiration. Backed by a small village, the gentle shallow waters that slightly shelve deeper the further you walk into the sea, are an attractive lure for families with young children. At night, people then return to Akyarlar for the fresh fish and seafood restaurants promoting Aegean dining.

Superb designed villas in Gumusluk for sale close to beach

$126,800
3
2
Bodrum
Otherwise head to the hugely popular holiday resort of Turgutreis. If beaches are your only interest on vacation, this is a good base as proven in the loyal dedication of British expats. The area has roughly 4.5 kilometres of sandy coastline starting with Gumbatimi beach in the town centre. Fener beach, the wind and kite surfing hub, sits next to Meteor beach that is largely devoid of mass tourism, except at the height of summer when Turkish schools break up for their holidays.

Moving further around the coastline, a massive stretch of sand awaits you at the kite surfing centre of Kadikalesi. It is not as famous as its neighbouring resort of Gumusluk, even though the latter has a smaller beach. Gumusluk probably appeals because of its quaint village appearance and ambience, but it has garnered international fame, especially with celebrities for its beachfront seaside restaurants serving fish and seafood. 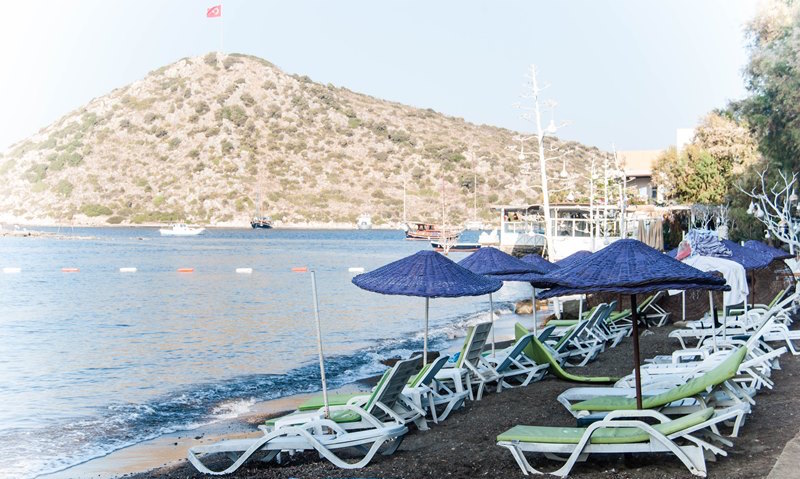 $350,800
2
2
Bodrum
Another good base as a beach holiday destination is Yalikavak that recently garnered much admiration when it built a state of the art marina for international mega yachts. The town centre beach attracts many sun lovers because of its easy to get to location and mass of amenities such as sunbeds, bars, and restaurants. Hotels or beach clubs occupy the smaller beaches heading out of the district but for a small fee, anyone can use them.

Gundogan, a popular destination for middle-class Turks also boasts of a town centre beach but unusually has jetties jutting out of the coastline to accommodate masses of tourists. However, if money is no object, get yourself further along the coast to Turkbuku, favoured summer destination of rich and famous Turks. Originally two villages that have grown into one, its nickname as the San Tropez of Turkey perfectly displays why opulence and luxury living is the order of the day here.

Further Reading: If this article about the best beaches of Bodrum has captured your attention, you may also be interested in reading our Bodrum region guide. Talking about things to do, the climate, lifestyle and more, it gives an in-depth look at each holiday resort of this gorgeous peninsula. 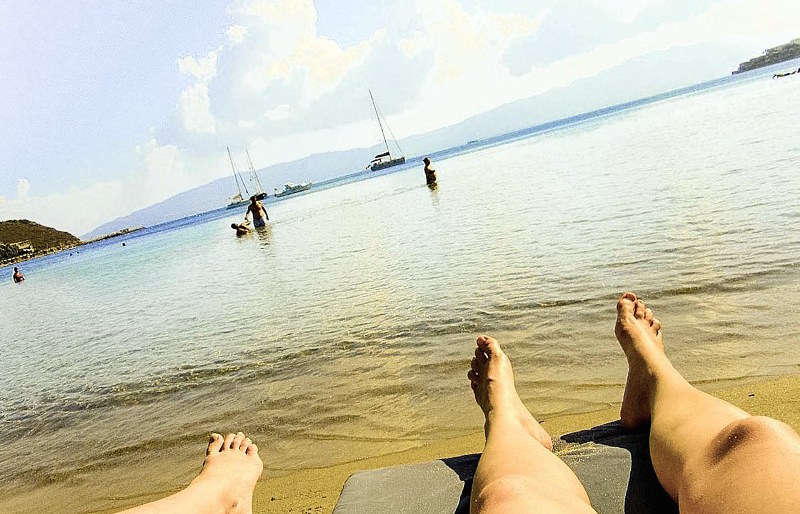