Property Turkey Blog What to Do in Fethiye in One Day

What to Do in Fethiye in One Day

With its spotless appearance, clean streets, and the full fronted harbour with its gorgeous Mediterranean Sea views, deciding what to do in Fethiye, Turkey is a big task given the choice on offer. Built over the ruins of Telmessos ancient city, it joins other coastal towns as a prominent landmark of ancient Lycia, one of many kingdoms from past civilisations that left their mark.

Part of its popularity is also because there is plenty to see and do from relaxing to water sports to historical sites or only a gentle step into the region’s cultural and heritage. For Brits, it is a favoured family destination, while budget backpackers flock for cheap cabin charter Blue cruises., to see and do everything at a leisurely pace takes about a week, but if time is short, here is a highlight of attractions.

From beaches to historical sites, we have listed things to do in the main town, and if time allows, further afield, by either hiring a car or signing up for guided tours. One thing is for sure though, whether you are a solo traveller, a group of friends, couple, or family, Fethiye will surprise and delight at the same time. 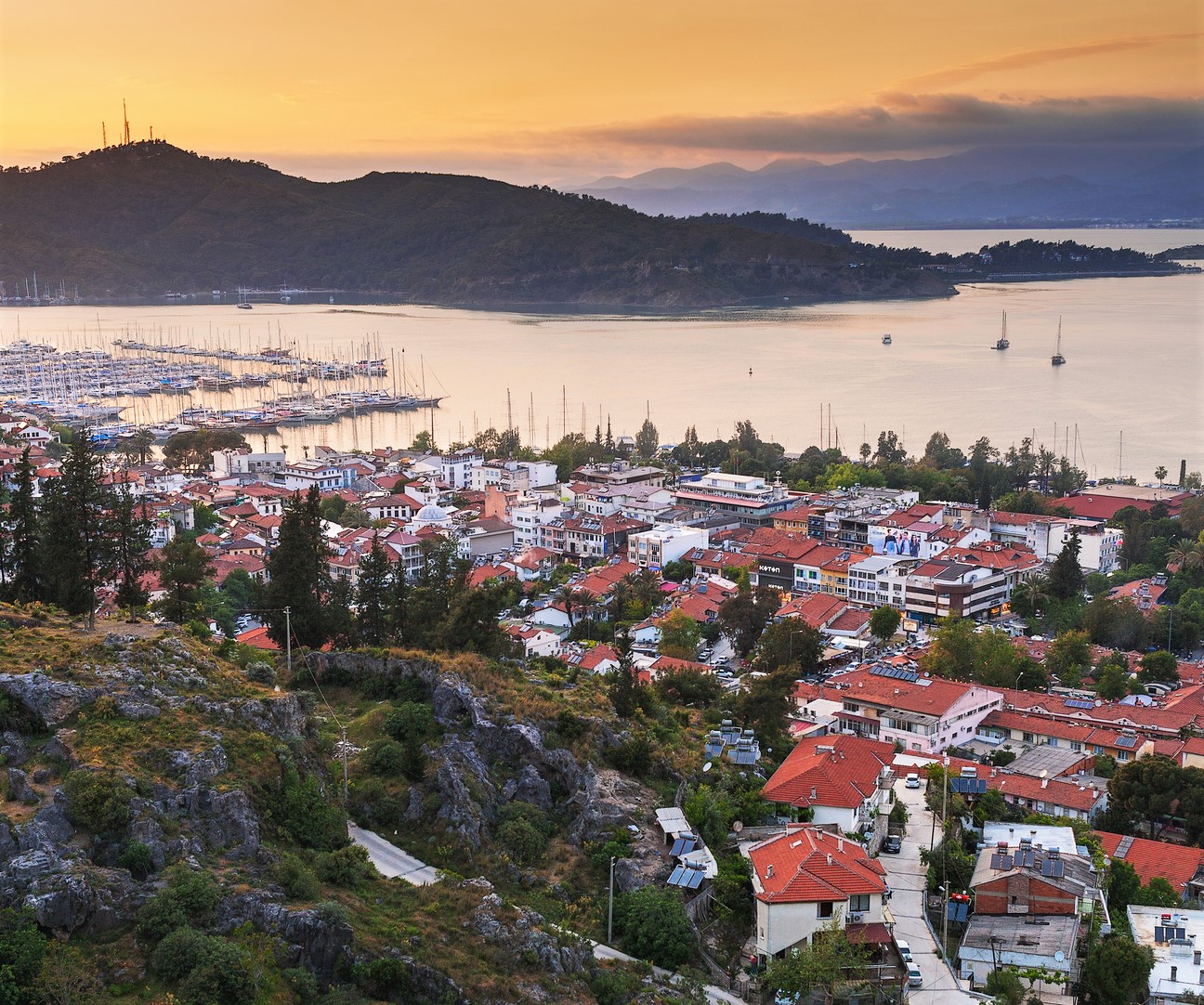 What to Do in Fethiye : Places, Attractions and Sporty Things

Overlooking Fethiye town centre like a king surveying his kingdom, the Lycian tombs project a majestic view and insight into beliefs of ancient Lycians who buried their dead in high up places, so it was easier for them to enter the afterlife. Amyntas, the most famous tomb, dates from 350 BC and is unique since the large interior is a typical size of a Lycian temple. Although reaching the tomb on foot is strenuous and not for those who have walking difficulties, the impressive view of Fethiye city is a worthy reward. 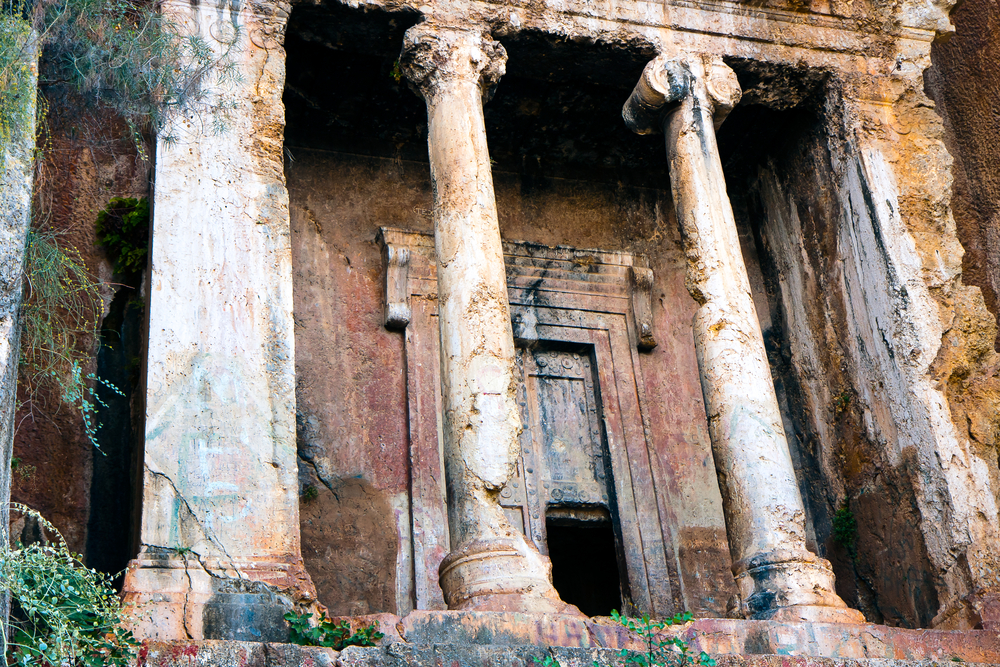 Following the Lycian’s story, Fethiye town centre museum is an over-brimming treasure chest of artefacts including coins, jewellery, vases, and other everyday items used in history. Objects include those discovered at other nearby Lycian cities such as Letoon and Xanthos, both of which are UNESCO World Heritage sites. Statues and busts of famous historical figures stand in the gardens, and a collection of artefacts from the nearby ancient city ruins of Tlos also includes telltale signs of its other citizens who were the Romans and Ottomans. Walking along the harbour district, an impressive 6000-seater Hellenistic/Roman theatre of Telmessos comes into view. Dating from the 2nd century BC, for many years, it sat neglected, missing much-needed care and attention but that changed in May 2014 when the biggest restoration project took place.

A short bus drive takes tourists to the eery hillside Kayakoy ghost village. Occupied at the beginning of the 20th century by Greeks and Turks, the 1923 Treaty of Lausanne ordered Greeks and Turks to return to their respective homeland. Greeks left Kayakoy, but returning Turks could not settle and deserted their new home. Many small earthquakes that followed prompted total desertion, and Turkey’s most famous ghost village was born. Cobbled streets, ruined houses and empty churches leading back to the main road, tell a sad story about war and the aftermath of destruction. (More about Kayakoy and what to see while there.) 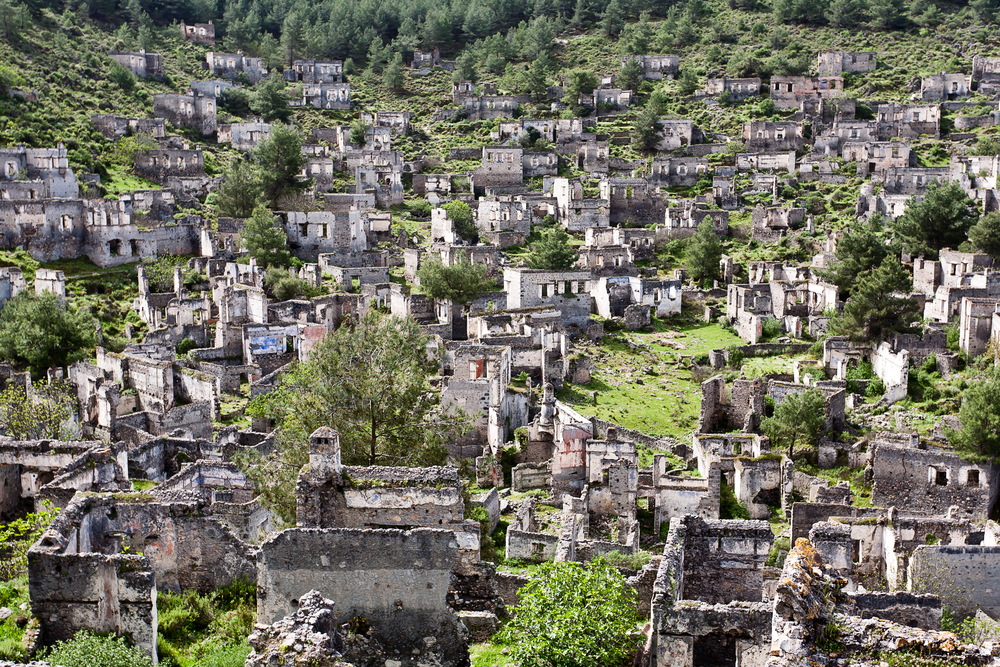 As a prime waterfront location, Fethiye boasts of outdoor activities including sailing, scuba diving, swimming, water sports, and boats. The Blue Lagoon, the most photographed beach and cove in Turkey and a short bus ride away from Fethiye town centre suit most families. This is also a great opportunity to make a day of it because the Blue Lagoon connects with the beautiful sandy, main Oludeniz beach. Bars and restaurants back the beach, and a delightful splattering of local shops breaks up the swimming breaks. More about what to do in Oludeniz. 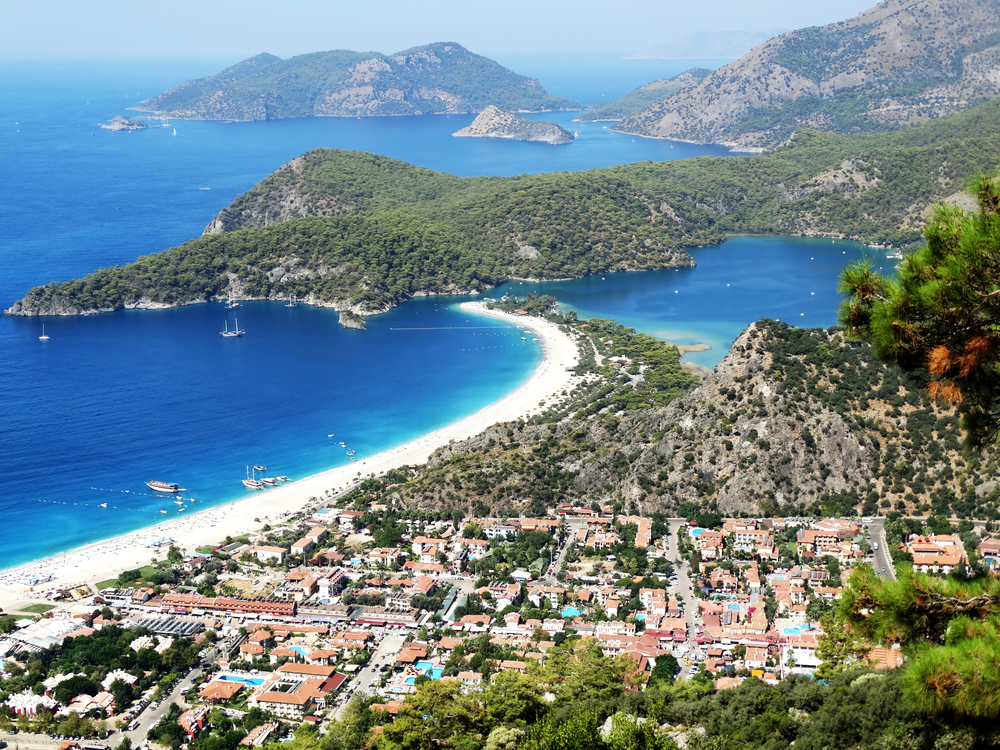 Intrepid explorers often catch a water taxi across to Butterfly Valley (Kelebek Vadesi), a rustic and natural beach backed by a towering, green valley encouraging visitors to be at one with nature. Locals also say it is the best snorkelling spot. Although the beach is stony, it throws up scenic views, and the walk to the back of the canyon leads to small waterfalls. Be warned though, don’t expect to see masses of butterflies unless it is breeding season. (More about Butterfly Valley.)

Plenty of beaches outside of Fethiye main town make a roaring trade of which Calis is also popular, but Fethiye is a centre of excellence on the Turkish Riviera, and worth exploring by boat. Hosted daily boat trips sail around the coastline to coves and bays for swimming and snorkelling breaks and a visit to nearby Gemiler Island and its ancient churches. Jump on board a boat trip, leaving from the harbour every morning during summer, or hire a Turkish gulet boat for a blue cruise of the Turquoise Coast. Fethiye, a centre of excellence for boat construction and sailing is home to many stunning gulets offering an alternative form of cruising.

Eighteen miles away from Fethiye is Saklikent Gorge, one of Mediterranean Turkey’s most stunning natural landmarks. A rushing stream of pure limewater gushes through the gorge between two hills separated thousands of years ago by an earthquake. Walk the designated path with a guide or stay in the visitor’s scenic area for photo opportunities and end your day in a traditional restaurant at the gorge side to sample fresh trout. 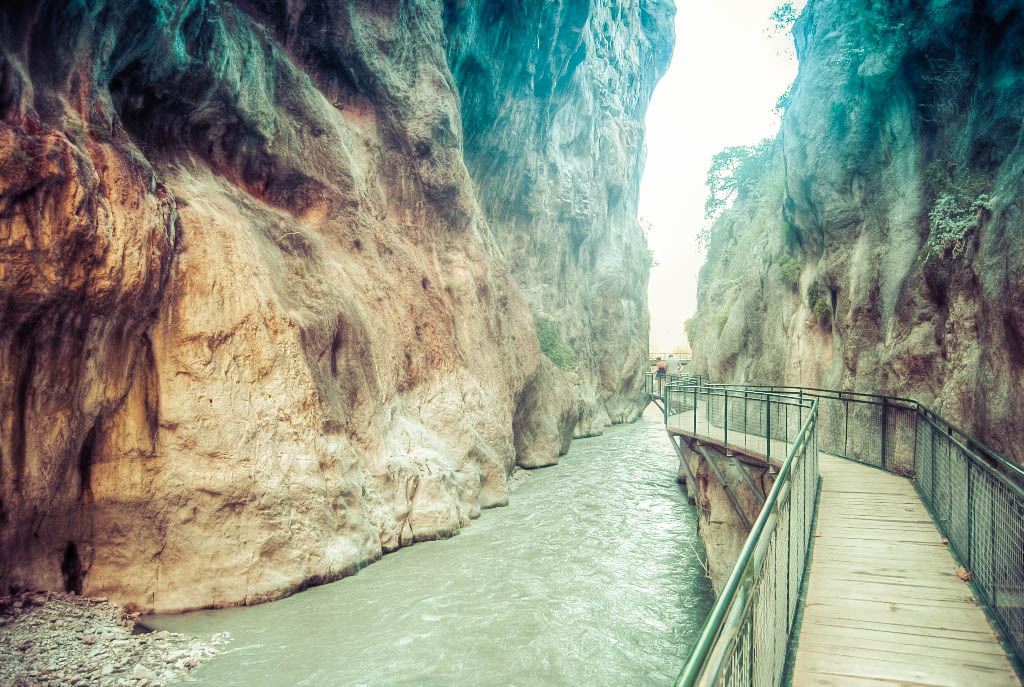 Fethiye itself is a delight to explore and stroll around, without a set agenda but the last recommended activity while in Fethiye for 24 hours is to jump off Babadag Mountain, with a qualified para-gliding pilot in a tandem ride. Aimed at novices who have never flown before, after landing on Oludeniz beach, passengers receive a video and photos as souvenirs

A favourite day trip out is to see Tlos ancient ruins in Xanthos valley. Fame surrounds this ancient city because it still displays a perfect blend of Lycian, Byzantine, and Ottoman architecture. From the Lycian rock tombs at the top of the hill, a marvellous view over the valley is a camera-worthy moment. Most tour agencies combine this trip with visits to Saklikent Gorge and Yaka park, a fresh trout farm high in the hills.

For a glimpse of bygone eras when Fethiye was just a small town, head to the Paspatur area near the harbour. Narrow, cobbled streets are home to a delightful collection of shops and bazaar, many of which sell souvenirs, and after spending your cash, relax in a street cafe or bars. Paspatur is also a great place at night for sit down entertainment, and near the Hellenistic theatre.

The Lycian way stretches for 5,000 kilometres from Fethiye to Antalya which would take months to complete. However, within the Fethiye region are short day time walks that take in scenic landscapes. So, pack a flask and picnic basket and put on those walking shoes to enjoy the best of the med coast. Before leaving though, make sure you tell somewhere where you are going and have good Wi-Fi connection on your mobile. (Find out more about the Lycian way.)

12: Day Out on Sovalye Island

Fethiye’s splattering of coastline islands includes such gems like Gemiler, home to old ruined churches and Sovalye, a secluded destination perfect for couples, as well as peace in among a busy holiday resort. Spend your time doing water sports, or book in overnight into a luxury hotel. Get there via water taxi from Fethiye town centre, but first read more about the delight of Sovalye. 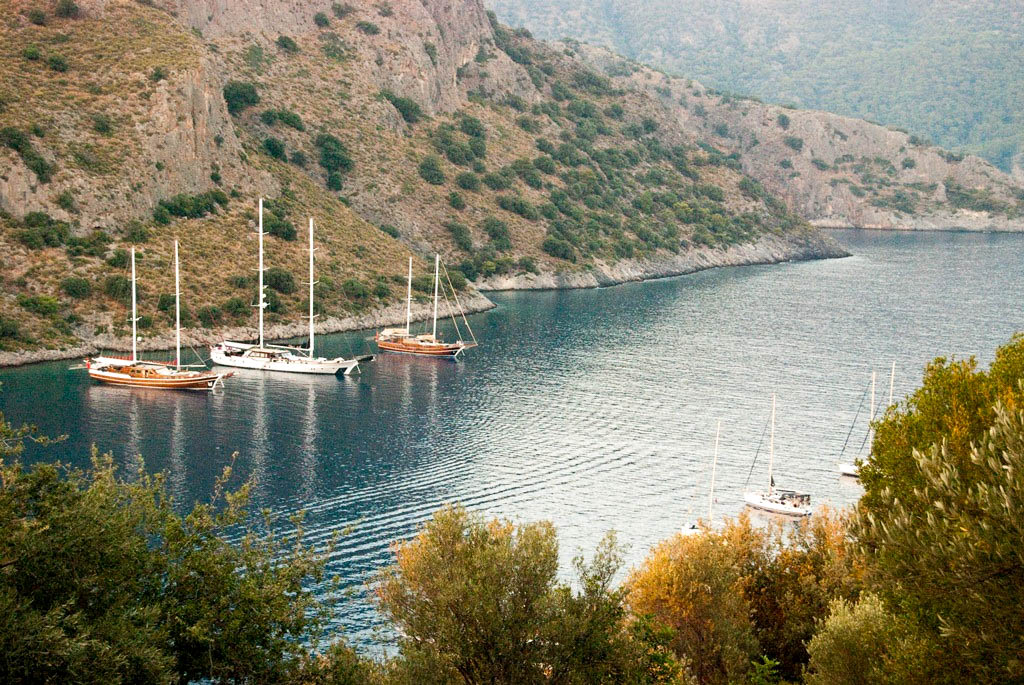 How about a day out at a prominent UNESCO site in Mediterranean Turkey? Sitting an hours drive away, Xanthos and Letoon was the ruling capital of ancient Lycia, hence its inclusion as a world heritage site. Both archaeological complexes sit side by side and together display Byzantine, Roman, Greek, and Anatolian civilisations. Landmarks to see include the sarcophagi, rock tombs, acropolis, and Artemis, Apollo, and Leto temples. Also, combine a trip to these sites with Patara beach, that is Turkey’s longest and sits just 20 minutes away. Patara also holds ruins and these three ancient cities together make up the perfect day out.

For something different from the sandy, beach resorts, head inland to the Taurus mountain range to reach the small but delightful Uzumlu village. Mixing traditional Turkey with modern vibes, it blends together to present an addictive place; you will return to. Known for its annual mushroom festival, this is also a favourite haunt for many holidaymakers to buy large, secluded villas with a private swimming pool. While there also visit the ancient ruins of Kadyana, sitting a 20-minute drive away.

15:  From Fethiye to Rhodes

There is no perfect combination than mixing Turkish and Greek culture in a one-day trip. The ferry departing from the main harbour in Fethiye town takes just 90 minutes before arriving on the fourth largest Greek island. Sites to visit include Tsambika monastery, Epta Piges seven springs, and the old part of Rhodes. However, we enjoy an alternative form of shopping before putting our feet up in a local pub to taste delicious Greek cuisine.

When you visit Fethiye, follow in the footsteps of famous film stars. Daniel Craig spent time in Calais Beach, to film the 23rd James Bond film called Skyfall. Russell Crowe also filmed parts of his movie, the Water Diviner in Kayakoy Ghost Village. Find out which other blockbusters movies have been shot in Turkey here.

Best Day Trips: For more things of what to do in Fethiye, we love the day trips and excursions sold by local travel agencies. This article highlights six ideal trips, and what to expect when signing up for a well-rounded region tour.