The Best Tours and Day Trips from Fethiye

The vast region of Fethiye on the Mediterranean coast of Turkey encompasses the main city centre and smaller holiday resorts like Calis Beach, Hisaronu, Ovacik and Oludeniz. As one of the top visited destinations in the country, everyone, whether young or old enjoys a full range of day trips from Fethiye.

Whether it is exploring historical sites, splashing in the Mediterranean or seeking out natural landmarks of beauty, travel agents in Fethiye sell many affordable tours and excursions. Including transport as well as food, and guiding, first-time visitors to Fethiye, who do not know the area, can save a lot of hassle and by having someone organise the trips, you are free to enjoy a scenic destination that is not only pleasing on the eye but also fun to explore.

The most popular day trip for first-time visitors to the Fethiye region is the famous trio. First on the itinerary is a short drive to the stunning, natural landmark of Saklikent Gorge. Formed hundreds of years ago by an earthquake, fast flowing water streams down from the mountains in between two large rocks, forming a narrow inlet that even in the height of summer, is a cool, refreshing place to hang out.

Most people just go to the viewing platform or hang out in the traditional waterside restaurants, before the group goes onto Yaka Park, high in the green mountains. Surrounded by masses of green forest and wildlife, a traditional lunch buffet includes Turkish mezes and fish.

Leaving Yaka Park, just 30 minutes away, the ancient ruins of Tlos, a collection of Roman, Byzantine, and Ottoman architecture present to you, a spectacular landscape view over the Xanthos Valley. Highly respected because of its Lycian rock tombs, Tlos is also mythologically known as the home of Pegasus, the winged horse.

Exploring the above attractions independently allows the pleasure of going at your own pace but for convenience, local travel agents group the three into one day trip from Fethiye centre and the surrounding holiday resorts. The first stop, while the summer heat is still at comfortable temperatures, are the Lycian rock tombs overlooking the town. What appears to be temples are where the Lycians laid royalty to rest, making it easy for mythological creatures to carry them to the afterlife.

The market, meanwhile is an age-old weekly, tradition occurring in every town and city in Turkey. Participating in the tradition of haggling over prices of souvenirs such as t-shirts, leather and spices, might seem daunting at first, but it does not take long to get into the swing of it.

An unusual but eerie place to end the day is Kayakoy Ghost Village, the former residence of Greek and Turkish neighbours who worked and lived side-by-side of the peace. However, the Treaty of Lausanne in the early 20th century, set in place of series of events resulting in locals abandoning their village. These days, ruined houses, churches and schools line the cobbled streets sprawling their way down the hillside and eventually leading to the nearby restaurants serving delicious lamb tandir, a highly recommended dish. 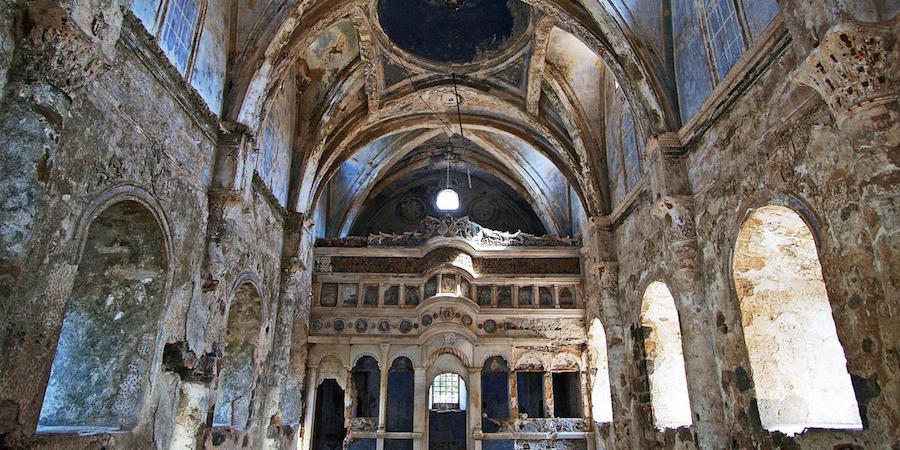 Catch the Ferry to Rhodes Island

Combine the delights of traditional Greek culture within your holiday in Turkey, by catching the 9 am ferry across to Rhodes, the largest of the Dodecanese islands. The Ottomans captured the old city part, famously connected with the Knights of Saint John, but now, the open-air museum is the top visited attractions on the island. Otherwise, explore the cobbled streets, indulge in traditional Greek food or chill out on the golden beaches it is famous for, before returning to Turkey at 4.30 pm. 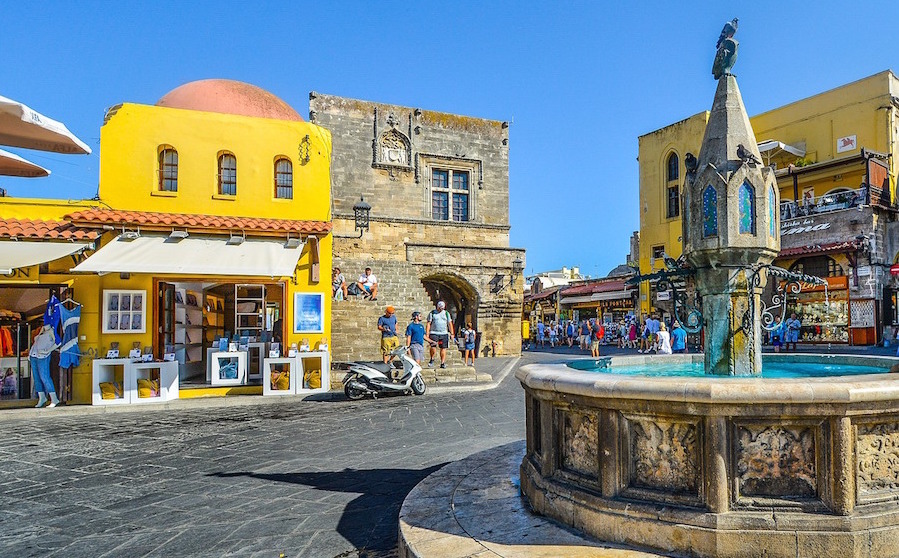 From Fethiye to Marmaris

130 kilometres away, the bustling resort of Marmaris has grown from a small village nestled in a green, coastal valley to one of the busiest holiday destinations in Turkey. Loved by young and old, of which the first adore the nightlife scene on the aptly named Bar Street, local landmarks include the castle dating from 1044BC in the old town district of the harbour. Nearby the covered Marmaris bazaar portrays an atmosphere of days gone by, with its traditional maze layout. It is a small, but beautiful place to shop for souvenirs but don’t forget to haggle on the prices. 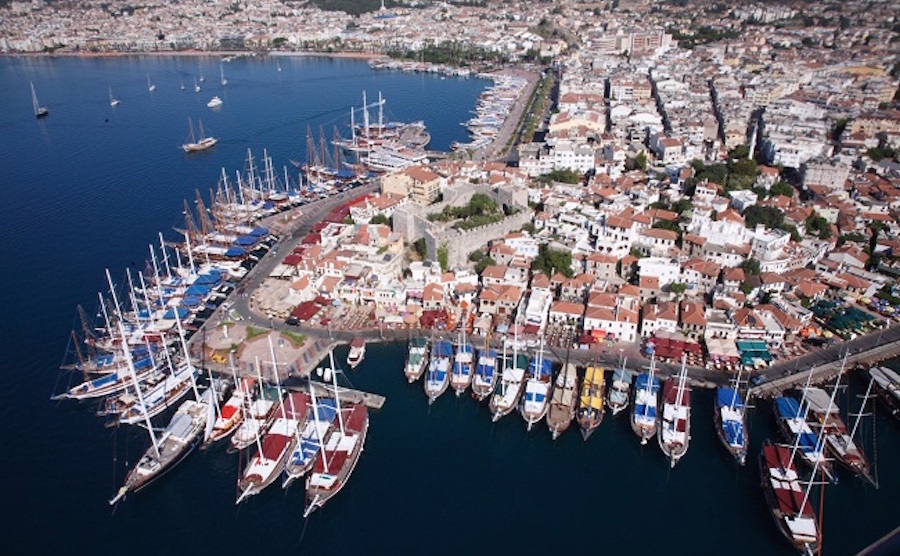 From Fethiye to the Dalyan Mud Baths

Especially ideal for families, Dalyan mud baths, just one hour drive away, is an amazing natural landmark of Turkey. Boarding a small boat, on the reed-lined river, holidaymakers slowly make their way up the winding route, passing by the majestic Lycian rock tombs overlooking the landscape. Disembarking to go to the mud baths, local legends say they are Mother Nature’s very own anti-ageing treatment. However, science quickly explains the phenomenon as a higher concentrate of sulpha.

Eat lunch riverside with a fantastic view, before heading to the last stop of the day, Iztuzu Beach. Made famous by Captain June and David Bellamy who fought to preserve conservation efforts in the area, it is one of the most beautiful beaches in Turkey, and a nesting ground for the endangered Caretta Caretta turtle. 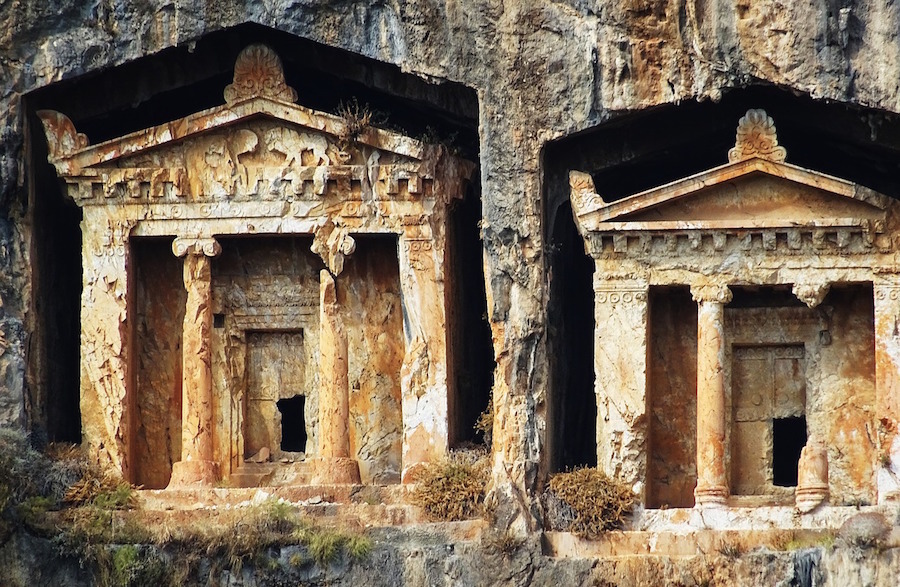 Further Afield: From Fethiye to Pamukkale

If you do not mind an early start, then Pamukkale, which is 3 hours away, is one of the Turkey’s top visited attractions and a UNESCO World Heritage site. Nicknamed cotton castle, because of its dramatic appearance of white solidified calcium water pools tumbling down the side of a hill, the natural pools overlook the small village of Pamukkale and make for an excellent holiday photo.

The museum holds ancient sarcophagi and statues uncovered from the nearby ancient city of Hierapolis, that was once a centre of healing for wounded Roman soldiers in battle, and for an extra fee, cool down from the summer heat by swimming over sunken columns in the waters of Cleopatra’s pool. Visiting Pamukkale from Fethiye is a long day, and anyone with small children should hire a car instead and stay overnight in one of the village hotels. 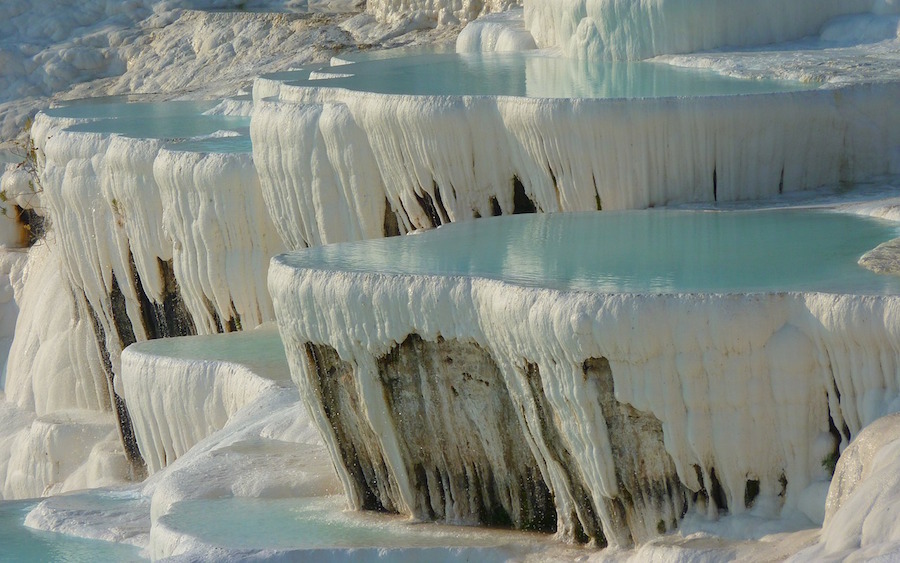 Further Reading: If you are visiting Fethiye for the first time, our Fethiye area guide has more information on the climate, population, and things to do. Our videos, also show why Fethiye is one of the best places in Turkey for a holiday or buy a Turkish property.