7 Exciting Things to Do in the Fethiye Area

Fethiye, a large region of Turkey that has garnered much attention in recent years is known for its gorgeous beaches, and as a starting point for Blue Voyage cruises of the Mediterranean. The area attracts many holiday makers and expats, lured by the ideal summer climate and simplicity of Turkish life.

Sitting at the foot of the Taurus Mountains, its historical value stems from the days of the Lycians who left tell-tale signs of their existence in ancient ruins such as the Lycian rock tombs overlooking the main city centre. As well as old and new influences, modern and historic sites have made it one of the top areas in the country for tourism, therefore this warrants an all-encompassing list of the best things to do while in the area.

The Ghost Village of Kayakoy

During the 19th century, Kayakoy was a thriving village with Greeks and Turks living side by side. Unfortunately the Treaty of Lausanne signed in 1923, after the Turkish war of Independence, insisted Greeks return to their home land and vice versa. Returning Turks however did not have the same trades of farming their land or agriculture and over time, they left the village to seek settlement elsewhere.

Other factors also contributed towards the final desertion of the village, now named a friendship area by UNESCO. Walking the cobbled paths over the hills, visitors pass the shell of houses leading to the abandoned church and school. With its 600 houses and 3 churches, Kayakoy is the largest abandoned town in Asia. Before visiting, read “Birds without Wings” by Louis de Bernières. This fictional story featuring Turks and Greeks is based on the ghost village. 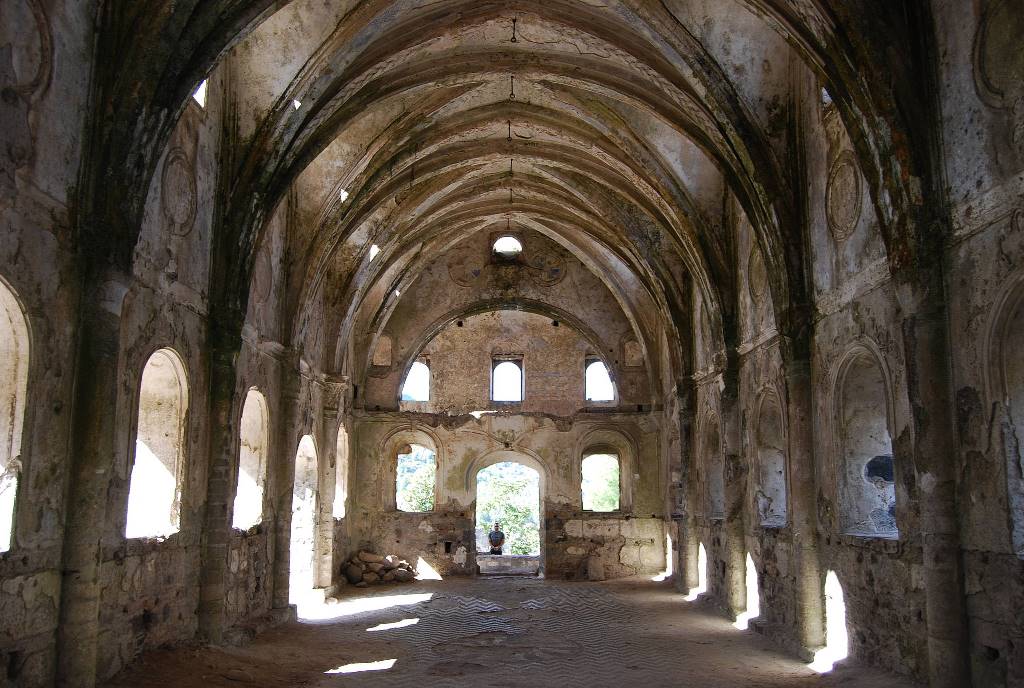 The Stunning Beauty of Saklikent Gorge

Every so often, we sometimes need a reminder of the power stemming from Mother Nature and on the Mediterranean coast of Turkey, Saklikent Gorge is it. The canyon stretching for 18 kilometres is 300 metres high and in some places accessible to walk.

Formed by a massive earthquake many years ago, gushing water from the towering Taurus Mountains maintains a constant cold temperature because the height of the canyon prevents sunshine from reaching the river bed. A man-made platform takes visitors from the entrance to the river bed, where if you have water proof shoes, you can continue the trek further into the canyon. 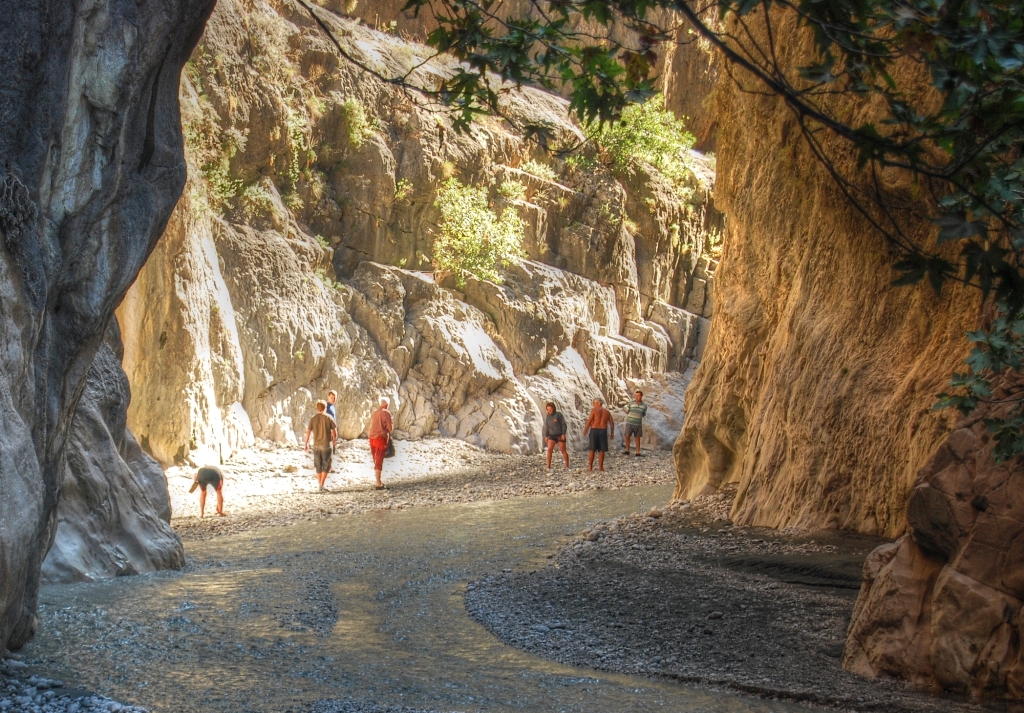 The Blue Lagoon of Oludeniz

Oludeniz, a neighbouring holiday resort of Fethiye town centre, holds one of Turkey’s most photographed attractions that is the Blue Lagoon. The small bay with its half semi-circle of sandy beach leading round to Belcekiz beach is popular for sunbathing and swimming. For a family, it is an ideal day out and the kids will enjoy renting a pedalo to paddle around the bay. 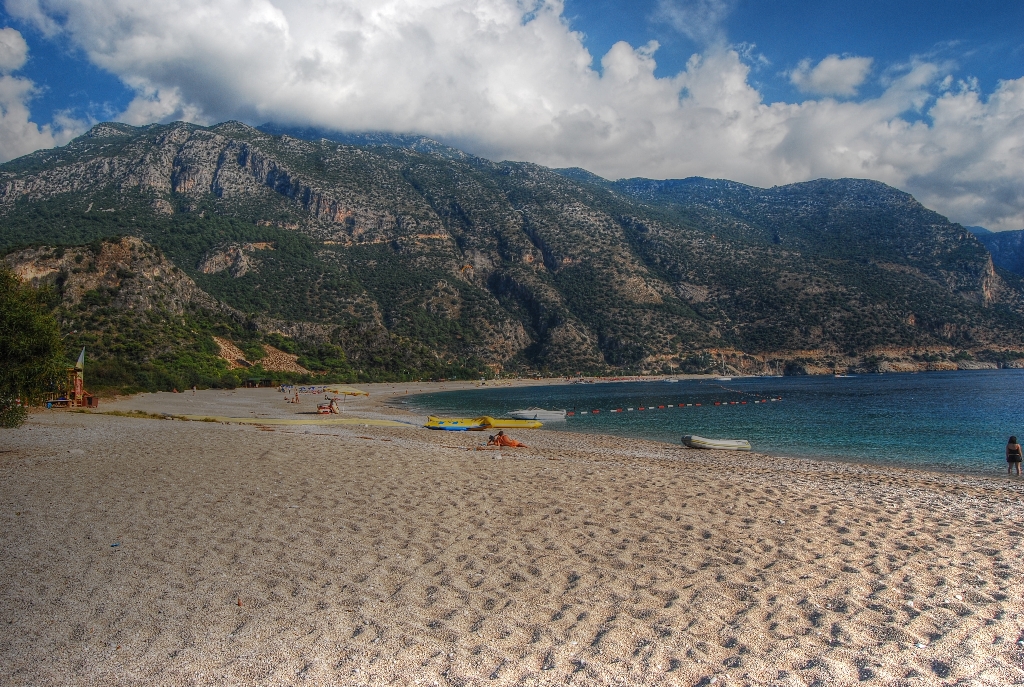 The Simplicity of Butterfly Valley

The easiest way to reach Butterfly Valley is via water taxi from Oludeniz beach. This haven, well-known as the breeding ground for butterflies in the latter half of the year, has a rustic and “back to nature” vibe that instantly appeals to most visitors as they disembark from boats and spend their time snorkelling or trekking into the back of the canyon where small waterfalls are found by adventurous explorers. Overnight accommodation consists of wooden huts or pitching your tent on the beach while restaurant facilities are basic and run on a self-service factor. Simplicity is what it is all about. 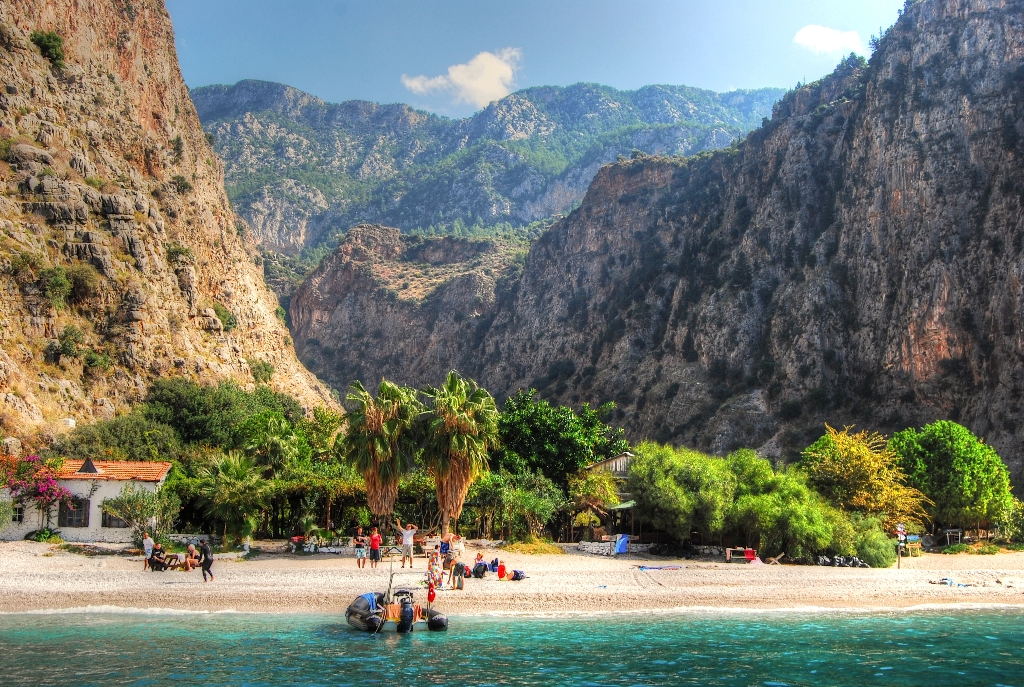 Soar Through the Air on a Tandem Paraglide Ride

Many people often complete their first paragliding trip while visiting the Fethiye region since the Baba Dagi Mountain has the perfect height and wind conditions. For anyone lying on the beach in Oludeniz, it is not unusual to see upwards of ten or more paragliders soaring through the air above you.

Likewise the bird’s eye view of the Blue lagoon, beaches and miniature town is a one-off experience to remember for life. The popularity is because all rides are undertaken with a professional and trained paragliding instructor; therefore setting off from the mountain, tandem style relieves the stress of inexperienced paragliders. Available to anyone in fit health, this is one of the top recommended activities to do. 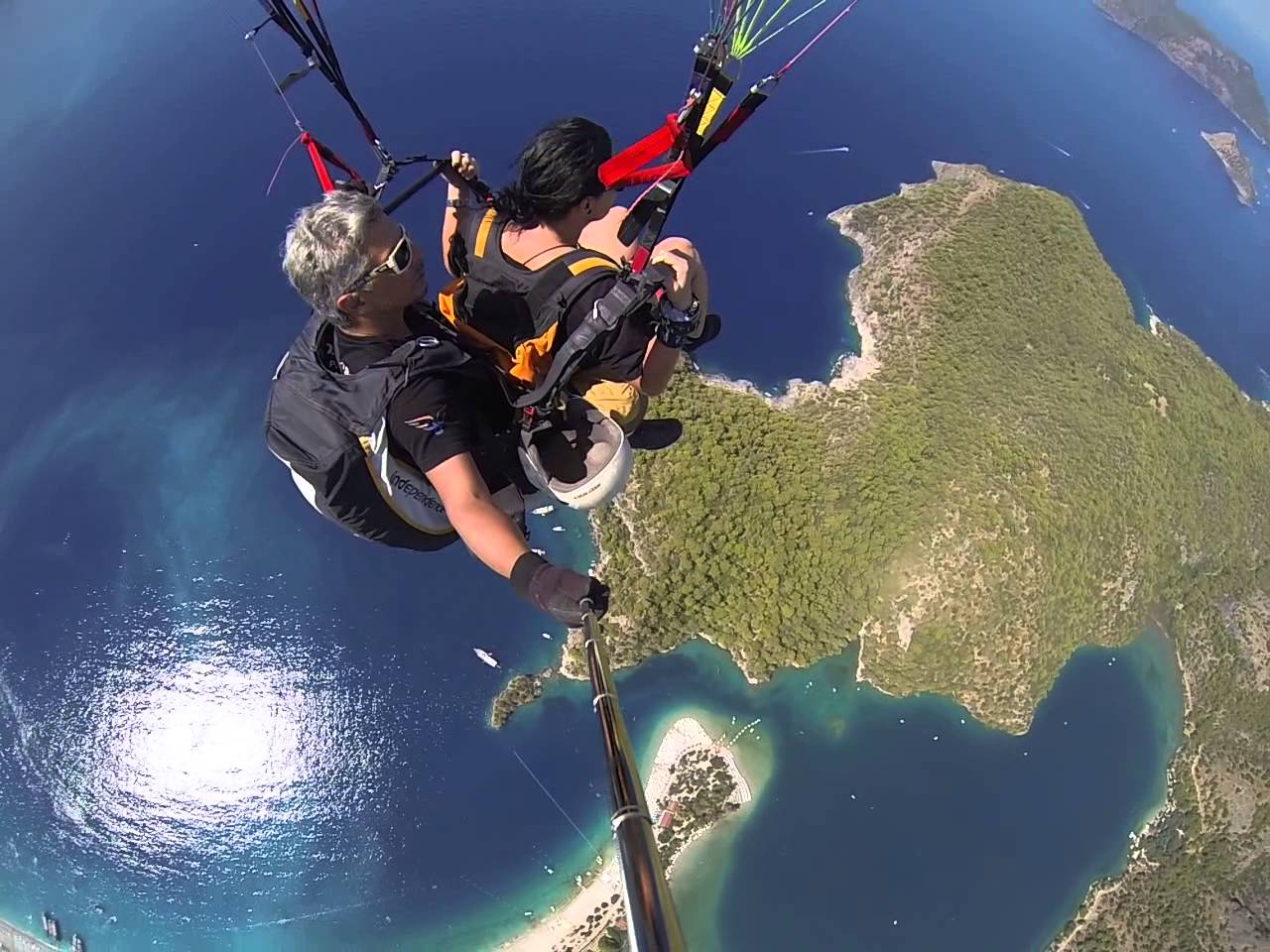 As one of the pivotal centres of the Turkish Riviera, it is no surprise that sailing is big business in Fethiye. Daily cruises around the coastline take passengers to places such as Gemiler Island and its historical churches or a 4-day cruise aboard a traditional Turkish gulet boat sailing west along the coastline will arrive at the next centre hub of the Turkish Riviera called Antalya. Ideally done in the height of summer, the experience of sleeping on deck, seeing Caretta Caretta turtles and swimming in secluded and scenic bays is an idyllic lifestyle that shouldn't be turned down. 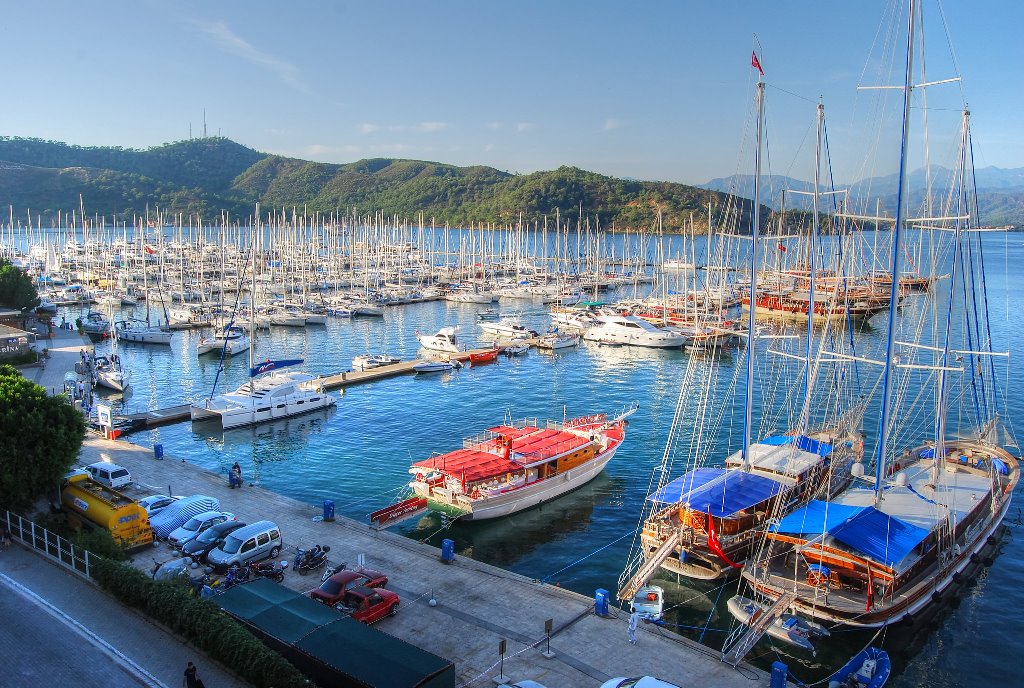 As the finishing point of the renowned Lycian trekking route, historical sites are in abundance around the area of Fethiye. The small amphitheatre near the main harbour has been restored to portray as much of its original appearance as possible and likewise the museum, displays an extensive collection of artefacts discovered from excavation sites along the Mediterranean coast.

Further afield and ideally reached by hiring a car are the ruined cities of Tlos, Xanthos and Letoon of which the latter two are UNESCO world heritage sites. Lesser known sites are Pinara and Sidyma, although it is worth heading to Patara for the day, because as well as its impressive ancient city ruins, it is also home to Turkey’s longest beach. 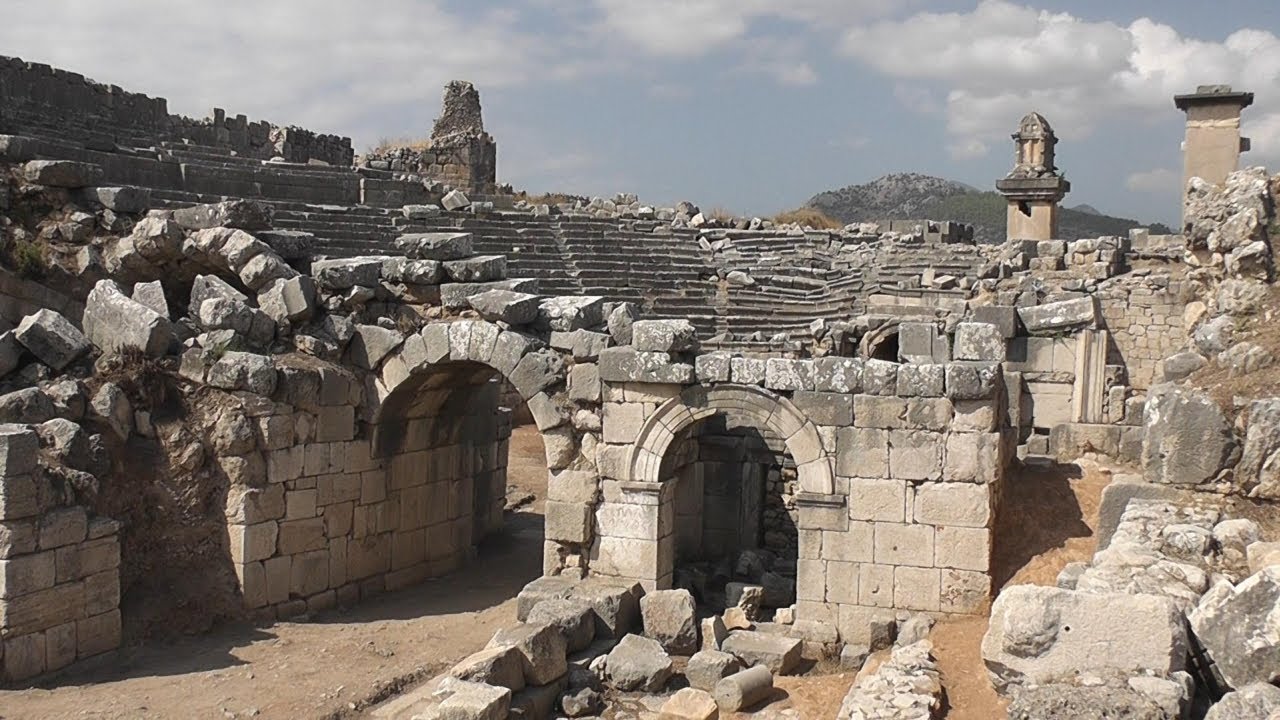