Excellent Reasons to Explore the Black Sea Region of Turkey

Every summer, many destinations in Turkey enjoy an influx of foreign tourists. City fans often flock to Istanbul; beach lovers descend on sandy coastal resorts of the Aegean and Mediterranean while RTW backpackers often put cultural Cappadocia on their bucket list, and finish their journey with a 4-day gulet cruise to Antalya.

However, despite extensive tourism promotion throughout the world of Turkish places to visit, few people explore the Black Sea region. Called Karadeniz Bolgesi in Turkish, its vast distance across the northern coastline promises unique experiences in a wide range of genres including cultural, rural, foodies, landscape, and historic travel.

5 Good Reasons to Visit the Black Sea of Turkey

Turkey covers more than 700,000 square kilometres and as a result, its views from the north to the south vastly differ. Forget about sandy beaches of the coastal resorts or the broad, flat plains of central Anatolian. Instead, visitors to the Black Sea enjoy some of the most beautiful and greenest landscapes in the country. Thanks to its unique climate, the soil is extremely fertile, and flora quickly flourishes.

The geographical layout also vastly differs but a focal feature is the Pontic mountain range, evoking a series of valleys, lakes, basins, and rivers. This mountain range is unsuitable for mass development of towns and cities, so the result is pure, untouched beauty of Mother Nature combined with small rural villages, where culture is still evident in everyday life. The Black Sea region is the only province in Turkey, where people living in the countryside outnumber people living in cities. Some areas are so remote, they do not have access to the internet, but for travellers looking to get off the beaten track, these villages tick all the boxes. 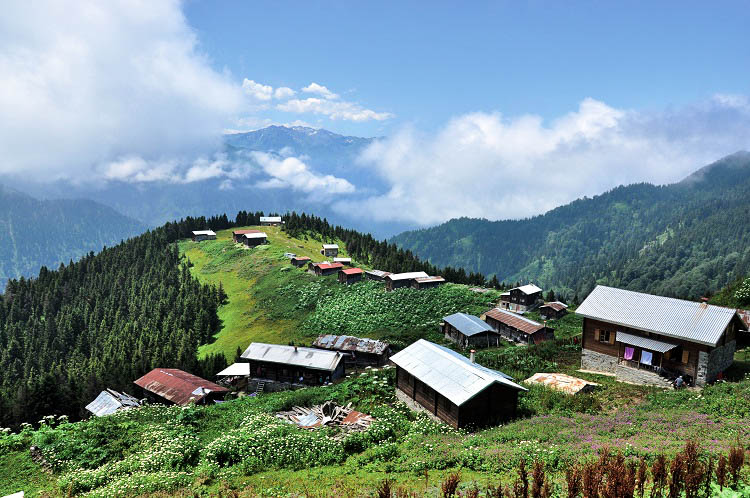 Each region is known for a certain speciality. Producing thousands of tonnes of Turkish delight every year, the UNESCO town of Safranbolu boasts about its fluffy consistency and varieties of flavour. Further East, Rize, the tea capital of Turkey is headquarters to the country’s national tea brand, likewise producing many varieties sold in bulk domestically and internationally. Trabzon, its neighbouring city exports thousands of delicious hazelnuts every year. Next time you are in your local supermarket, check the ingredients of nut derived products and they are most likely to have come from this region.

Zonguldak has an international reputation for their expertly carved Devrek walking sticks, now collector’s items because of historical, mythological, and religious texts intricately carved into the frames. The scenic Ayder plateau of the Kackar Mountains range focuses on plateau tourism, i.e., migrating in summer from the coastline higher up into the mountains and old restored Ottoman houses in Amasya are the city’s connection to the historical timeline of the now defunct Ottoman Dynasty. All of these make for great and interesting exploration. 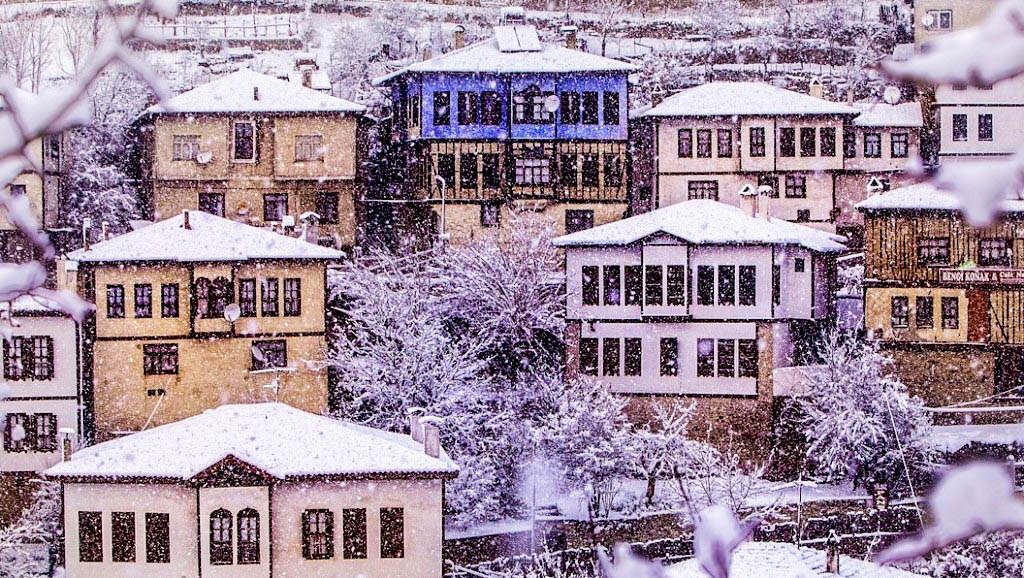 In many rural areas, the environment influences people’s diets because they don’t have easy access to large supermarkets, full of imported and packaged goods. Black sea people certainly enjoy a healthy, fresh approach to cuisine but they have also been innovative with how they use ingredients. Naturally, as the region covers the entire northern coastline, fish is in abundance but especially hamsi (anchovies.) Locals fry, grill, boil, and steam it, as well as including it in dishes of rice, bread, and even cakes!

The second most widely available products are dairy because fat cows grazing on the green landscape easily help them to produce butter, milk, and cheese. In the northeast, muhlama, a delicious meal served with crusty bread just consists of corn flour, butter, and cheese made into a fondue consistency. Thirdly, green vegetables and herbs make delicious salads; and traditional mezes but also frequently end up in soup, such as black cabbage corba made according to age-old family recipes. 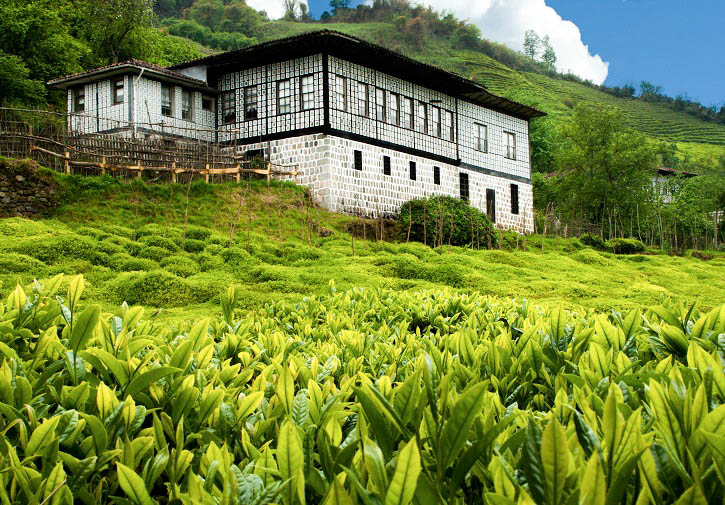 If walking uphill is an easy task, a place worth seeing is the fantastic 14th century Greek Orthodox Sumela monastery clinging to the side of Mela Mountain in the Macka district. Its precarious appearance is a clever deception because its architecture protrudes into the mountain, thus securing its location for nearly 700 years!

Another monument defying belief is the Pontic tombs of Amasya, further west. Carved into the cliffs and overlooking the central city, they are now a UNESCO World Heritage site. Unexpected surprises also await travellers who explore mountain paths in remote areas, such as the colourful mosque of Marral. From the outside, it looks like a simple tin hut, but the 150-year-old mosque interior is a spectacular array of vibrant colours painted on wooden carvings to depict words and meanings from the Quran.

Turkey’s culture heritage is so diverse; it would take a full book to explain it in-depth. However, interesting groups to learn about include the Laz and Hemsin communities of Northeast Turkey. Hemsin people are traditionally associated with the Camlihemsin region of the Rize province. Rarely mentioned in guidebooks, experts say they are formerly of Armenian descent. Speaking their own language, Hemsin people enjoy a countrywide reputation as incredibly witty, captivating storytellers and excellent Tulum (bagpipe) players. Also renowned for their expert pastry making skills, urban legends say Hemsin people can bring great financial wealth to a bakery. Living side by side with them is the Laz community who also has their own language, yet UNESCO has put it on their endangered list. With a strong historical and cultural connection to Georgia, Laz communities enjoy plateau life and its fresh food, healthy lifestyle, and simplicity. Visit the Ayder plateau festival in June to enjoy local dances, food, and celebrations. 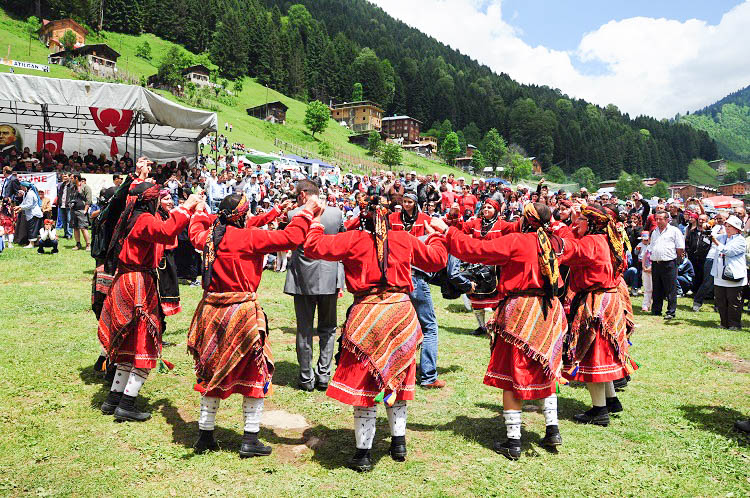 Note: The weather in the Black Sea Region of Turkey vastly differs from the rest of the country and can be unpredictable. In winter, some areas receive snow up to a metre deep and in the height of summer; night times in the plateau regions are chilly despite the glorious sunny days. If you are planning a visit, research the area and weather at that time of year so you can pack wisely.