To indulge in a Turkish Hamam is to enjoy the ultimate in grooming and relaxation. This ancient tradition is a great insight into Turkey’s culture and many locals today, both young and old, do it, as a resting ritual. The Hamam is more than just a place to get the whole body clean. The bathing culture is to relax and ease aching muscles in piping hot water, and a central part of social rituals. In the old days, bathhouses were also where locals exchanged news and gossip.

In the past, brides held their hen night there, and mothers checked out potential brides for their sons. For men, hamams were a place to exchange political news on neutral ground. Men and women had separate bathing areas, and never the twain shall meet. These days, breaking social protocol is not treated so harshly, and visitors enjoy mixed or private baths. Indeed, many travellers to Turkey put this Turkish tradition on their bucket list of things to do to boost the body and mind, so what should you expect if you plan one? 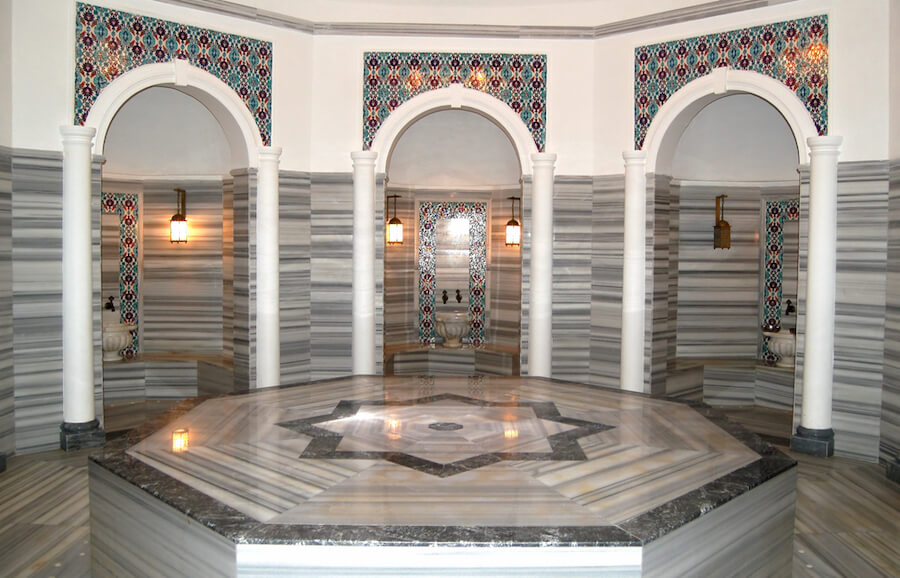 What is a Turkish Hamam?

Most Turkish baths have the same layout, and the delightful cleansing process is the same for everyone. First, enter the camekan, a multi-storey atrium with a central fountain. Use a changing room or cubicle, and lockers to store belongings. An attendant will give you a pestemal, (traditional Turkish towel), and contrary to rumours, nudity isn’t encouraged so wear your bathing suit. Locals used to wear wooden clogs, but that does not happen now for health and safety reasons. From there, you enter a warmer antechamber in preparation for entering the much hotter sicaklik.

Getting steamy is essential for the body pores to open and release toxins, although you can leave at any time if the warmth gets too much. While lying down in the sauna room, eyes are drawn to the ceiling to appreciate tiny skylights etched into the central dome. If it gets too hot, and the sweat is too much to bear, look for a basin situated on the wall, for cold water taps and bowls to rinse down.

At ground level, a gobektasi; (octagonal heated platform marble slab) dominates the room. Guests lie on it and enjoy (or endure) a head-to-toe moisturising lather of soft soap suds and full-body scrubbing massage. Or simply lie down, rejuvenate the soul, and enjoy a steam bath. These days, many baths offer modern skin and body treatments alongside the more traditional ones. A popular choice is an olive oil massage and a cup of Turkish tea after.

Turkish Bath Need to Know: Speak quietly because people visit to relax and for peace. Check with the bathhouse as to the age limit of children. The public bath etiquette is all about relaxing, but the process focuses on exfoliating to get rid of dead skin. Hence be careful if you plan to sunbathe for the rest of your holiday because the sensitive new skin is more likely to burn without cream. 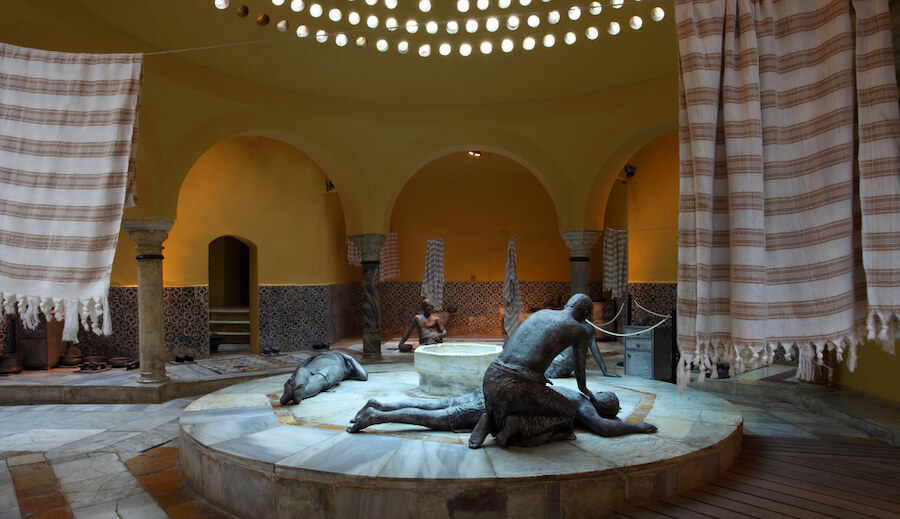 Istanbul boasts of many hamams, but the most famous is the 330-year-old Cemberlitas. Built by the renowned Ottoman architect Mimar Sinan, the hamam retains the authentic touches that still impress visitors today - and attracts a loyal following as well as the odd Hollywood camera crew. Still heated traditionally, a vast furnace produces enough steam to heat the entire building. They also offer a traditional body massage and exfoliation along with modern treatments.

Like Cemberlitas, famed architect Mimar Sinan designed this 16th-century Hamam, also in Istanbul. Built at the request of Sultan Suleiman’s wife Roxelana, the structure stands on the very spot where the ancient public baths of Zeuxippus once stood around a thousand years ago. In 1910 the Hamam closed for many years, then housed convicts who overflowed from the nearby prison. Restored in the 1950s before becoming a carpet bazaar, in 2007, it once again became a famous bathhouse favoured by locals.

This 18th-century bathhouse, built at the end of Ottoman reign, was a symbol of a fading regime, and an attempt to raise funds for the library of Sultan Mahmud I. Suleyman Aga, a famous architect from that era designed it. King Edward VIII, Kaiser Wilhelm II and Florence Nightingale have all visited, along with many prominent figures and royalty. Visitors enjoy the incredible soaring dome, traditional fittings and of course, a traditional Turkish massage and exfoliation alongside the more modern treatments available. Unlike other big hamams, Cagaloglu boasts of an original design. Built-in 1741, witness a genuinely traditional structure, an Ottoman heyday remnant. Find it in the Fatih district, near the Hagia Sophia and Blue Mosque.

Urban legends said soaking in the waters at this historic Istanbul Hamam cured Hepatitis A. Of course, it is a myth. Still, nevertheless, it attracts visitors by the thousand - visitors preoccupied with its luxury and premium treatments to unwind. The building dates to 1557, so is a beautiful place to soak in a bit of history. 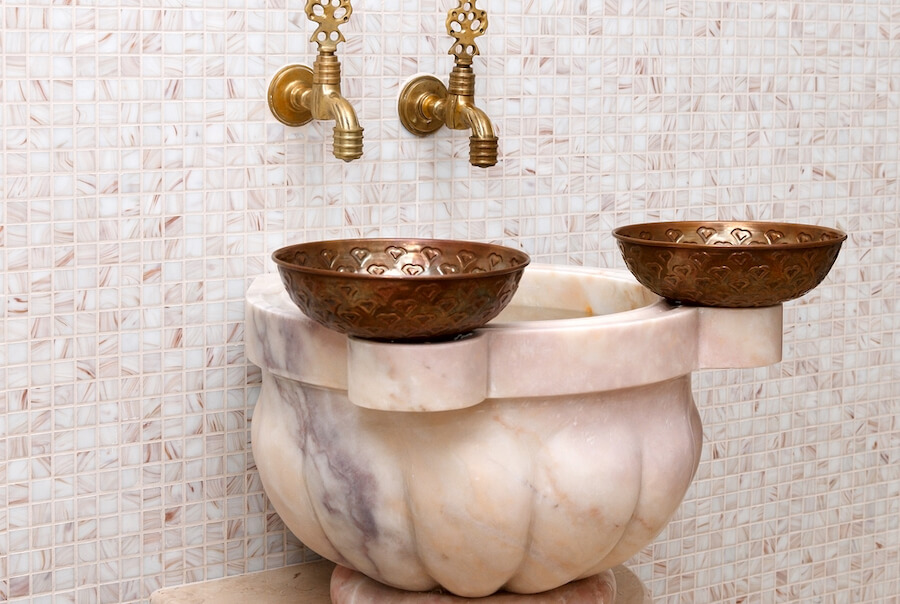 North-western Bursa is famous for its natural hot springs, but this luxury Hamam is a must-visit because of the deluxe indoor, thermal-heated pool, jacuzzi and fitness room. The water is reportedly full of minerals and has several health benefits. Heated to 44 degrees Celsius, this is the perfect place to soak away those aches and pains.

Best Tourist Attractions in Turkey: Other tourist attractions and must-dos of Turkey draw in millions of visitors from around the world every year. This article talks about the must-see attractions, what makes them unique and how to get there.

Guide to the Fatih District: If you visit any bathhouse in the Sultanahmet touristic area, there are many other things to do, and places to see before or after. As Istanbul’s top visited destination by foreigners, these attractions often make it into worldwide travel publications. We also get behind the scenes to look at local neighbourhoods for a little bit of culture, and tradition, just like the Turkish Hamam.

This is a once in a lifetime opportunity for you to own a highly exclusive home on the paradise that is known as Sovalye Island in Fethiye. With private beach access, a swimming pool, and stunning interior and external design - this is one of the best properties on the entire island.