Property Turkey Blog About the Mugla Region of Turkey: Points of Interest and More

About the Mugla Region of Turkey: Points of Interest and More

Welcome to the Mugla region of Turkey, a famous and popular province with many attractions, beaches, and places to visit. Hosting millions of holiday tourists every year, who enjoy exploring points of interest, this large expat hub also has many pockets of foreigners living in towns and villages both dotted inland and around the coastline. Covering a large section of Turkey’s southwestern corner, the name refers to the central city but the province to which it belongs.

As well as many miles of sandy coastline, other things to boast about include many historical attractions and the area’s unique places of natural beauty often feature in worldly travel publications as must-visit destinations. Most travellers visit between May to October when the primary tourism season is, but expats love the year-round ambience, and one of Turkey’s best weather climates. To visit, book tickets for flights to Dalman international airport, one of Turkey’s top touristic, award-winning travel hubs. Alternatively, arrive into an official entry seaport in Fethiye or journey via the main D400 highway running from Turkey’s east to west. So, let’s look at the main attractions and top resorts to stay and live. 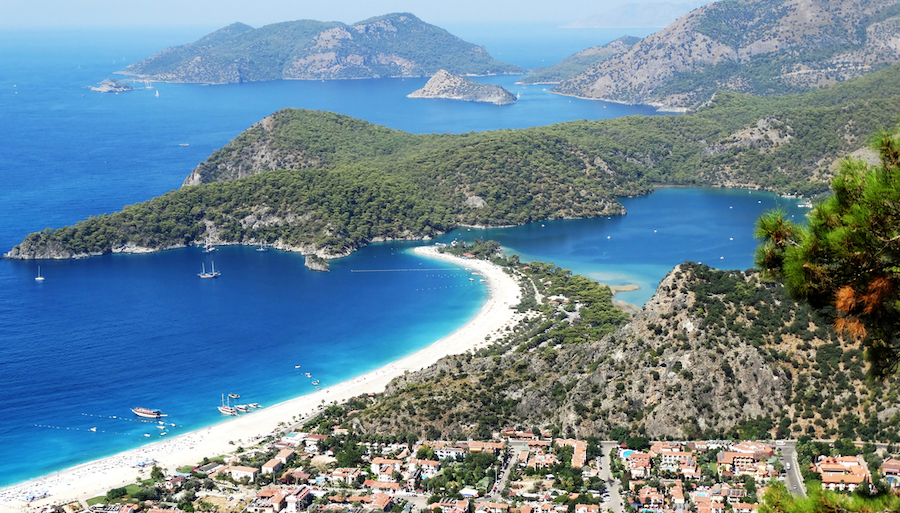 Bodrum Peninsula: Sitting on the Aegean coast, the picturesque Bodrum peninsula, a time-honoured destination for artisans, easily attracts budget and luxury holidaymakers. The peninsula includes the town centre and many smaller holiday resorts like quaint Gumusluk, upmarket Torba, luxury Turkbuku and Yalikavak with its large mega yachts docking in thanks to its state-of-the-art marina. Bodrum’s seen its fair share of celebrities and royalty over decades, proving its esteemed reputation as the ideal place to pursue leisure and the more delicate side of life. (Read about our nine reasons for loving Bodrum.) 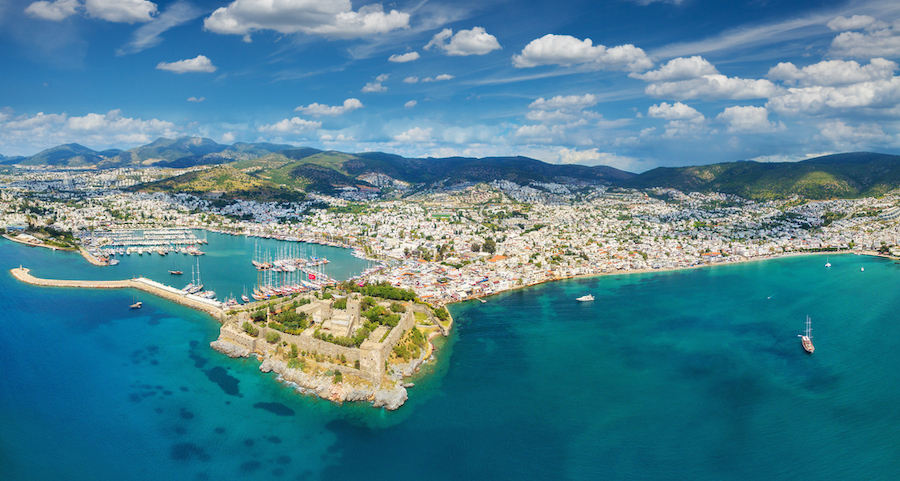 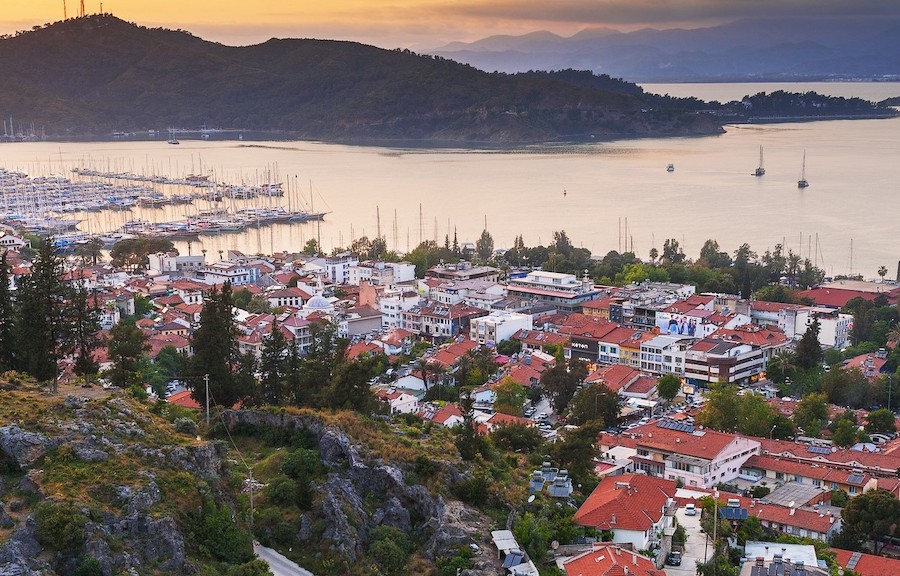 Datca: Separating into old and new districts, Datca maintains an exclusive reputation and stays relatively off the mainstream holiday grid. However, this firm favourite of middle- and upper-class Turks sees many who buy houses there either for summer or in retirement years, while others stay in boutique hotels. Knidos is the main historical attraction, but the reason to visit all is all about rest, relaxation and soaking up the traditional, coastal ambience of a place in a world of its own.

Dalaman: As the name of the town and the central district, Dalaman sees millions of visitors every year, but mainly because they pass through its international airport. In recent years, housing developments attracted foreigners with surprisingly affordable prices, and there is much future potential for investment. Although it does offer a small stretch of coastline, much land sits inland.

Dalyan and Ortaca: These two areas are all about natural beauty with sights like the Dalyan delta river, Iztuzu, and Dalyan mud baths. Also sitting nearby, once unheard of Sarigerme with its long sandy beach is now a popular destination for holiday package makers. For somewhere with a quaint, rustic ambience resembling traditional Turkey, Dalyan fairs well.

Marmaris: This bustling beach resort saw its fair share of controversies over the years thanks to the lively nightlife surrounding bar street. However, the town cleaned up its act and despite being a party central, is a great family holiday destination. The town centre’s long beach is a great lure, but for many, the first view of Marmaris as they come over the mountains leave a longing in their heart and soul to return year after year. 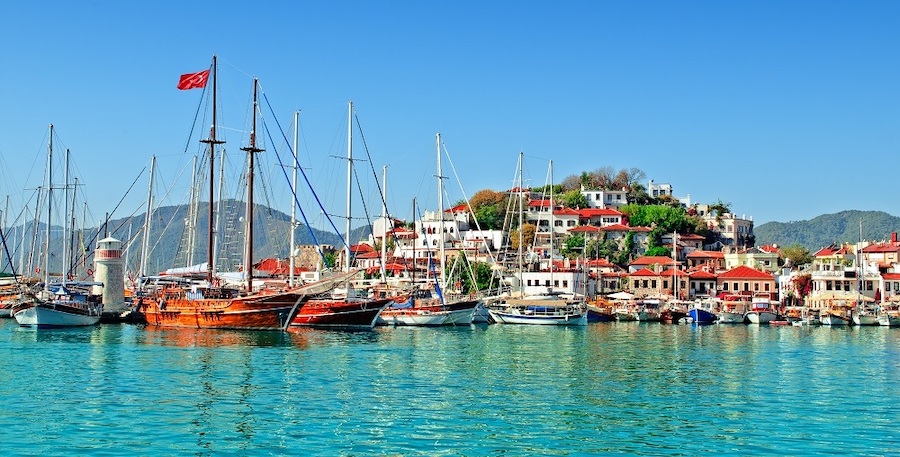 For sandy stretches and cool waters, take your pick of gorgeous beaches, luring everyone in with a typical sun, sea, and sand ambience. Some have achieved blue flag status, while others make a roaring trade in water sports. Almost all, offer sunbeds and umbrellas to rent by the day, and restaurants and bars backing them serve food for lunchtime and snacks. Some of our favourites include…

Oludeniz and the Blue Lagoon: We love Oludeniz main beach stretching around to the Blue Lagoon, one of Turkey’s most photographed places. The beach is naturally protected by law, so if boarding a boat trip from here, expect to get wet; however, the hillside and Mediterranean Sea views are to die for. Expect to see paragliders soaring in the air, since their landing pad is here.

Calis Beach: Turkey boasts of many fantastic places with beautiful sunsets, but Calis tops them all. This resort, built initially to cope with a tourism overspill from Fethiye town centre is now a popular holiday destination. Calis also attracts a fair share of foreign house owners who either stay during summer or have moved out here permanently.

Icmeler: Often overshadowed by its neighbour, Marmaris, Icmeler still earns a stellar reputation for its family-friendly beach offering water sports like jet skis, paragliding, parasailing and scuba diving. Sitting less than a stone throws away, bars and restaurants break up the day for mid-day snacks, and relaxation is in abundance.

Iztuzu Beach: Made famous by David Bellamy in the 1980s, who campaigned to stop construction because it was the nesting ground for the endangered Caretta turtle, Iztuzu links to the reed-lined Dalyan delta. Be careful because, in the height of summer, the sand gets so hot and can burn your feet but otherwise, expect dramatic views and a lively swim.

Marmaris Beach: We love Marmaris main beach running along the promenade, and although it is a mixture of pebble and sand, offers up stunning views and warm waters. Rent a sunbed and umbrella or spread out your towel, and if adrenaline rushes spike, head to a water sports centre for a spin on a jet ski. 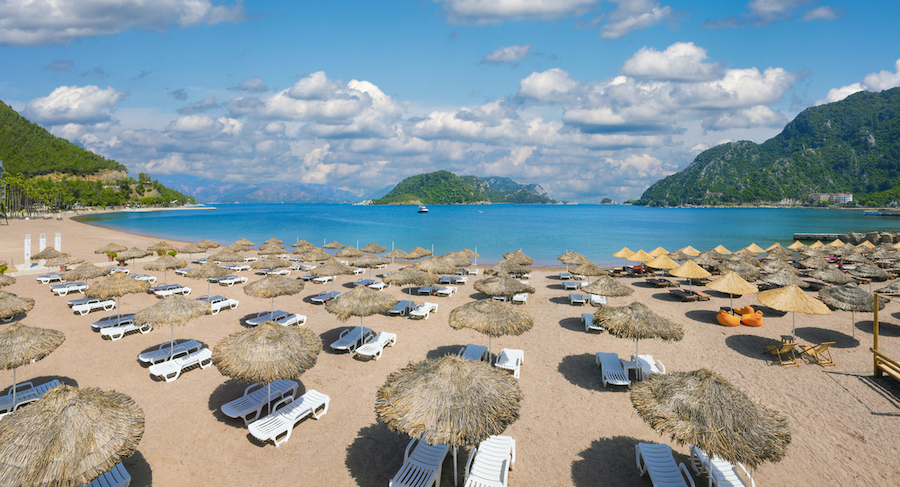 If beaches, bays, and coves, don’t excite you but sightseeing does, visit the marvellous historical sites. We recommend seeing them from April to June or October to November when there is less chance of rain, and cooler weather temperatures won’t hamper the day. Most have an entrance fee to pay and will accept the Turkey Muze card giving discounted access to museums and sites all over the country.

Kayakoy Ghost Village: This deserted village never fails to humble us, with its eery atmosphere and abandoned schools, churches, and houses. Wander cobbled streets to the hilltop to see how vast the village was before locals left it after the Treaty of Lausanne in 1923. After exploring, settle down in a nearby traditional restaurant to sample their famous lamb tandir. 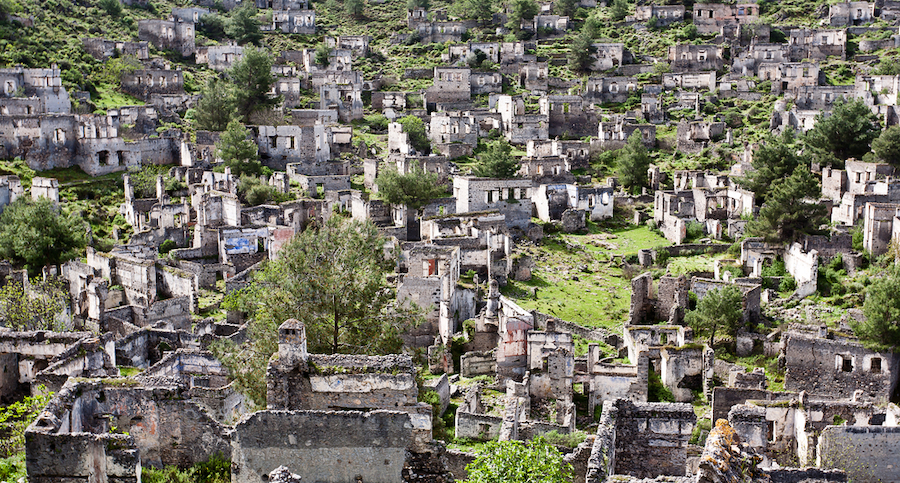 Amyntas Rock Tomb: Fethiye belonged to the Lycian empire, and they buried their dead in places up high so they would have easier access to the afterlife. These days, evidence exists in the Amyntas rock tomb with a marvellous view out towards the Mediterranean Sea. The steep climb uphill is worth it. 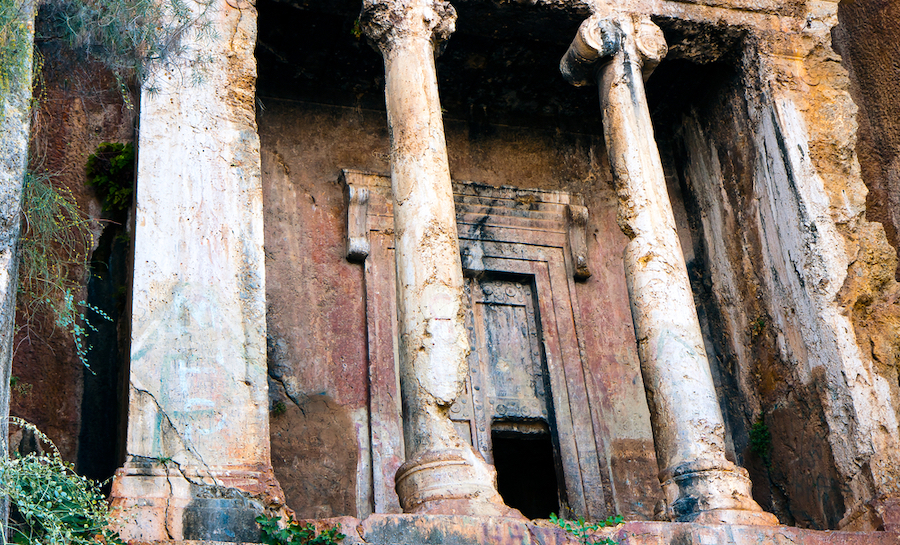 Dalyan Rock Tombs: While it is easy to access some rock tombs, Dalyan’s are not and hence provide a more dramatic appearance, nestled in the hillside overlooking the delta. Belong to the ancient ruined city of Kaunos; thieves looted them in history; hence nothing exists inside, but as the area’s mascot and landmark, they stand tall and proud.

Gemiler Ruined Churches: Take a sailing trip to stop off at Gemiler island, more so overnight if on the four-day trips. Descending from the boat to follow the path around and visit ancient church ruins is a great insight into history. Urban legends say Saint Nicholas who went on to be known as Father Christmas spent time on this island. Our favourite part though after seeing the churches is the fantastic sunset drop.

Xanthos and Letoon: This is serious business because the site’s historical importance gained them inclusion into the UNESCO World Heritage site list. Their importance is because archaeologists discovered ancient texts from the Lycian empire here, which gave them great insight into a previously unknown civilization. Additionally, historians’ credit them for Hellenic influences.

Tlos Ruined City: We love this ancient metropolis because it displays a perfect blend of Lycian, Byzantine, and Ottoman architecture. Discovered in the 19th century, evidence shows habitation from the 2nd century BC, and the Lycian rock tombs on the hillside is a marvellous view over the Xanthos plains.

Bodrum Castle: Many more historical sites await you, but we end this section with Bodrum castle, simply because once again, it is the peninsula’s and town centre’s primary landmark. Standing on the coastline, it also features the Underwater Archaeology Museum displaying the world’s oldest shipwreck. 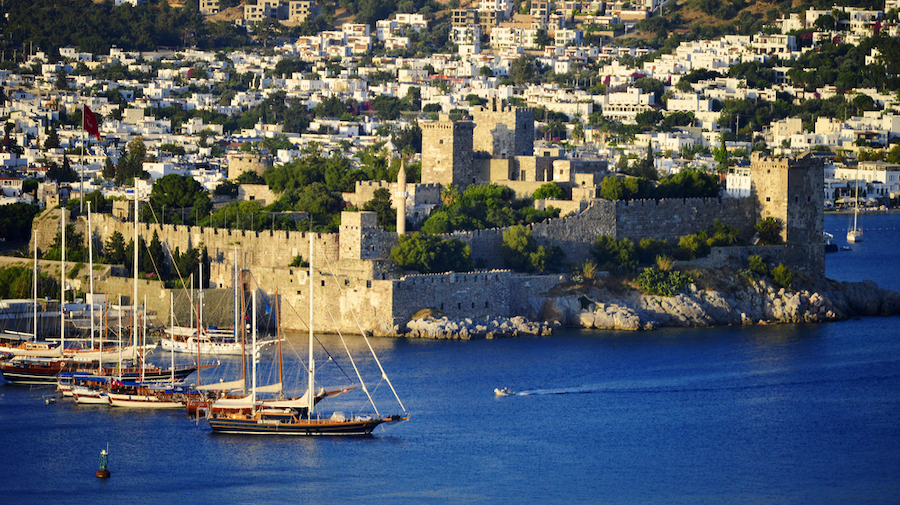 Other Points of Interest in This Region

Butterfly Valley: Once a well-kept secret, the power of the internet spread the word about Butterfly Valley whose motto is to be at one with nature. We reach it by catching the water taxi from Oludeniz, although most daily boat trips stop there for an hour or two. Walk to the back of the valley to see small waterfalls or take the opportunity to indulge in what is known as Mugla’s best snorkelling site.

Saklikent Gorge: Also near Fethiye, Saklikent Gorge once again displays the power of Mother Nature. Formed by an earthquake, thousands of year ago, a walkway between the two mountain faces means you can walk into the gorge, which just after winter when the ice melts gushes with water from the Taurus mountain range. After exploring, settle down in a riverside restaurant for a traditional trout lunch.

Koycegiz Lake: Mainstream tourism markets don’t visit Koycegiz lake, but yet Turks and foreigners living in surrounding areas love it for the feeling of being at one with nature. At weekends, they flock to drink tea lakeside or jump in a small, boat to the sulphur springs at the end of the lake. There is nothing fast-paced about this destination because of its protected status where flora and fauna thrive.

Dalyan Mud Baths: Urban legends say the mud baths make you look ten years younger, but this is just a myth by excursion ticket sellers. What the mud does do though is cleanse the skin thanks to high sulphur content. Jump in, cover yourself from head to toe, and then after drying off in the mid-day sun take a spring water shower for a refreshing feel.

Also of Interest about Turkey

Antalya Region: If you like Mugla, and want to explore further, head to its next-door neighbour, the Antalya province. This is Turkey’s second most popular destination for tourism and foreign house sales and is adored globally by many nationalities. With much to see and do, and Turkey’s best beaches, you are assured of exciting travels.

About Us: We are Property Turkey, a real estate agent with offices in many towns and cities. Our expert, local knowledge helps hundreds of people buy and relocate to the country. Contact us today to know more about investing in the Mugla region of Turkey.