Property Turkey Blog 7 Things to Do and See in Alanya

7 Things to Do and See in Alanya

Alanya, on the sprawling Mediterranean coast of Turkey, is one of the country’s top holiday resorts. Belonging to Antalya’s metropolitan region, it sits 110 kilometres east of the central hub. Explaining its popularity is easy because the airport is just a couple of hours away.

A mild winter climate, as well as hot summer temperatures, has enabled it to grow into a bustling district offering everything holidaymakers want. Beaches fronted by the deep blue Mediterranean Sea, and a scenic background setting of the Taurus mountain range also make it a picture perfect postcard scene.

Tracing its beginnings back to the Hellenistic era, the Romans, Byzantines, Armenian, Seljuks, and Ottomans have also all scrambled to dominate Alanya in history. One of its most notorious moments though was when Roman general Marc Anthony bestowed its beautiful beach upon Cleopatra, the queen of Egypt. First-time visitors will be delighted to know that numerous activities in Alanya encompass the historical, nature and fun aspects of the region. 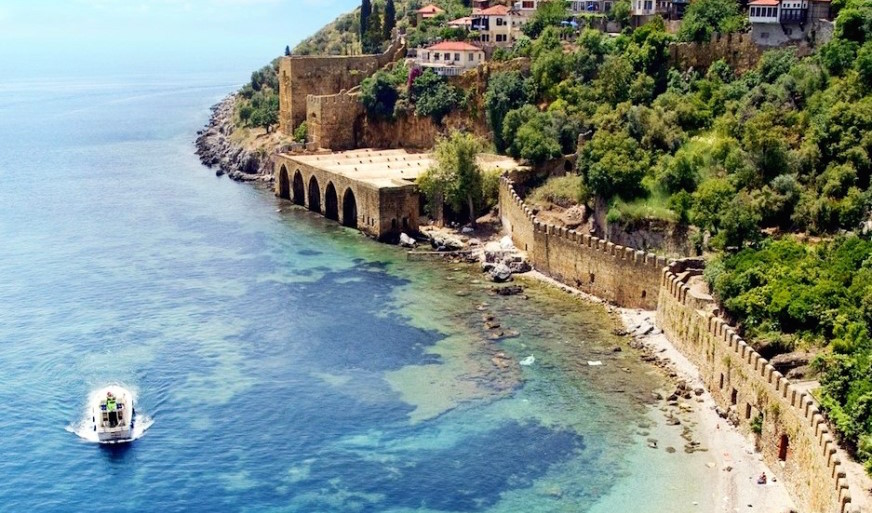 Things to Do and See in Alanya

Otherwise known as the Red Tower, this dominating landmark sitting on the harbour coastline stands at 35 metres, and five storeys tall. As a prime example of the architectural style from its time of construction in 1227, the ground, and first storeys hold many artefacts in an ethnographic style including guns, carpets, tents, and rugs. History lovers adore the Red Tower, and everyone else loves it for impressive landscape views of the harbour and the Mediterranean Sea.

Nearby the pier section of the harbour daily fills with ticket touts eager to tell you about their daily boat trips sailing around the coastline. Book a day of relaxation, sunbathing and swimming or alternatively, head for a pave side restaurant to eat al-fresco style. Although they are pricier than other restaurants in Alanya, their reputation for impeccable service precedes them. 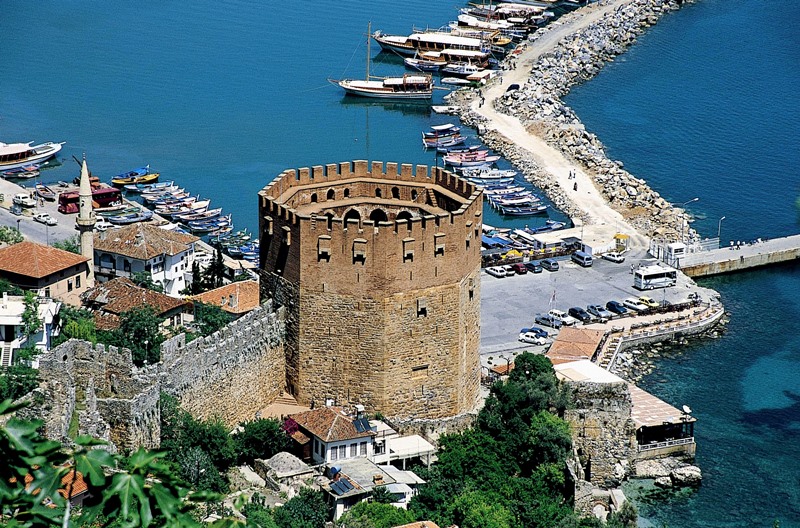 A short walk away, the 13th century Alanya castle, the region's second landmark replaced earlier Byzantine, and Roman remains. Naturally, like other castles, its hilltop location of 250 metres means a steep climb. In the height of summer, catch a dolmus or taxi to the top, then walk down for even more spectacular views and a less strenuous stroll.

Surrounded by the sea on three parts, executioners threw people, condemned to death into it making it a present day eerie open-air museum. Under the Ottoman Empire, the castle became less of a defence port and more symbolic of living quarters. The UNESCO World Heritage tentative list in 2009, accepted applications for Alanya castle, and other landmarks of the region.

Otherwise known as the Weeping Cave, the 15,000-year-old stalagmites of Damlatas are impressive, but the 90% humidity of the atmosphere is its claim to fame. As a popular destination for people with breathing problems, despite its relatively small size, they spend hours in the cave that has a constant temperature of roughly 23 degrees and high levels of carbon dioxide.

The entrance sits near Alanya’s most famous beach that is Cleopatra. Miles of long golden sand and blue Mediterranean waters make it a popular venue mainly for adults, because the waves are quite high for children. Vendors sell cheap sunbeds for rent, and restaurants nearby serve refreshments so it is a relaxing day in one of the region’s top spots, named after Cleopatra because rumours say she swum in the waters. 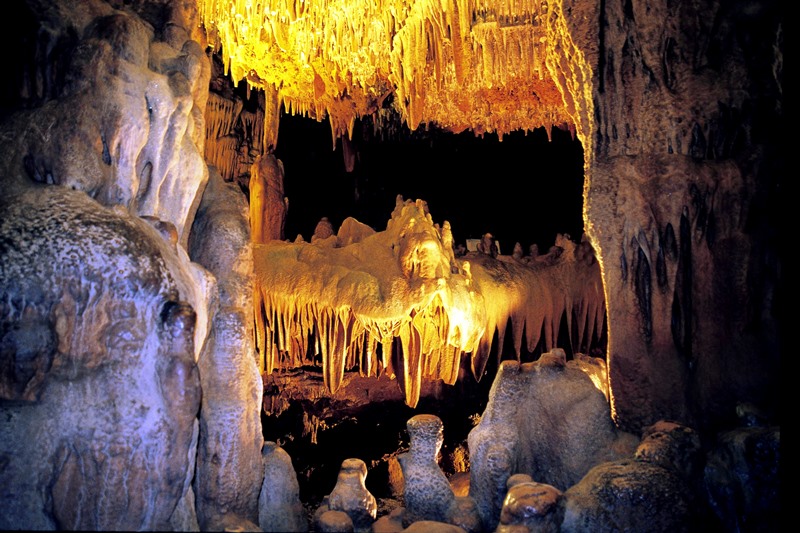 Flowing into the Mediterranean Sea from the Konya province, Dimcay River, nearby Alanya is a refreshing break in summer. Restaurants in the widest part serve delicious food and provide a unique ambience with hand-made wooden pergolas standing in the water. Constant cold water and the scenic views of nature appeal mainly to families. Nearby, the million-year-old stalagmites of Dim Cave, one of the largest limestone caves in the region, also make it a favourite place to visit. Walking platforms throughout the 360-metre long cave make it an easy walk for young and old.

The 2nd-century bronze statue of Hercules, a mythological figure, is a prize exhibit in the Archaeological Museum, situated across the road from the tourist information centre. Accompanying other intricate pieces from the Hellenistic, Roman and Byzantine empires, the museum that opened in 1967 is smaller than its counterpart in Antalya, but is still impressive for history lovers. Shipwreck artefacts and ethnography items, hold pride of place inside while in the gardens, items like the traditional oil press highlight an old-fashioned way of living in Alanya. Ancient mosaics also garner much admiration from visitors.

While most suggestions above involve exploring, the Water Planet Aqua Park will appeal to families with small children. Sitting in the Okurcalar district, 24 slides project a variety of excitement from the high-speed kamikaze to relatively calmer four people side-by-side multi-slide.

A 300-metre rafting course with artificial waves provides an even calmer experience along with tide pools, or adrenaline junkies can kick it up a notch with a 70-meter bungee jump. Showers, changing rooms, snack restaurants, and bars provide all amenities so all you need to do is take your swimming costume and towel.

If a waterpark seems relatively tame for your needs, Korucay River provides a rush with its white water rafting rapids. Sitting in the Koprulu Canyon National Park of which the landmark is an ancient Roman bridge, the medium grade course lasting for approximately 14 kilometres is not for timid or shy rafters. Your guide gives safety briefings and equipment before you set off and at the end of the course; a sumptuous, riverside BBQ lunch is your reward.

Further Reading: You may also like to read our city guide on Alanya, detailing the climate, history, population and more. 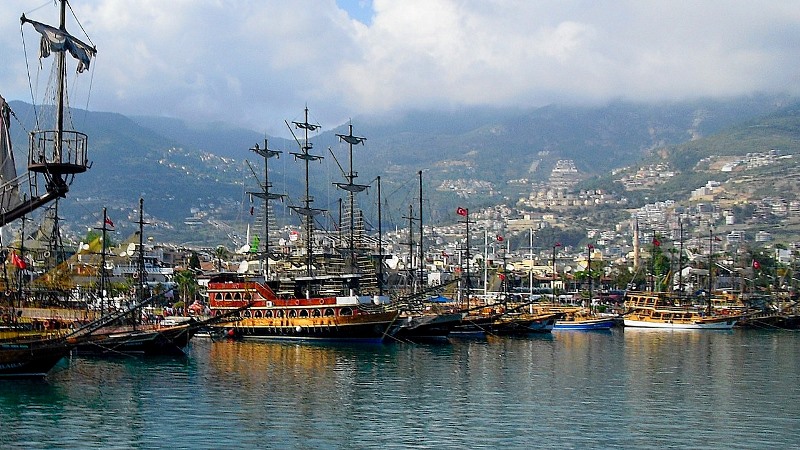 Peer out over the sea and enjoy a marvellous vista on a daily basis with one of these high quality homes built to luxury standards for a complete lifestyle in Turkey. These are some of the finest you will find in the Alanya region, and well priced within the market for investment.

Enjoy all the benefits of living in Turkey - a warm climate, spectacular beaches, superb food, and everything else that you could imagine right at your fingertips. This project offers a range of residences for sale at competitive prices for those looking to enjoy long vacations every summer.

A fine project of apartments in different sizes for sale in Alanya just a short walking distance away from a sandy beach area and local groceries and shops, making these residences suitable for those looking for bargain vacation properties to bring the family to every summer.