The Delicious Culinary Scene of Istanbul

Eating out in Istanbul is an appetising journey through some of the greatest cuisines of the world. It's extremely diverse multicultural population ensures visitors indulge in traditional Turkish dishes but also a host of international food ranging from A la carte delicacies to tasty street snacks. Budget travellers looking for cheap meals to fill their tummies and satisfy their palettes are just as delighted as the tourists who prefer luxury travel by dining in prestigious restaurants employing esteemed and respected chefs.

Otherwise known as the humble fish sandwich, this street food, mainly eaten at lunchtime is particular popular on the shores of the Bosphorus in the Eminonu district. At the entrance to the famous Galata Bridge, floating fish boats grill freshly caught catch-of-the-day before placing it between crusty bread with a lavish helping of salad. Sitting at makeshift tables in front of the boats is an experience of eating like the locals because, at lunchtime, many business workers flock here. 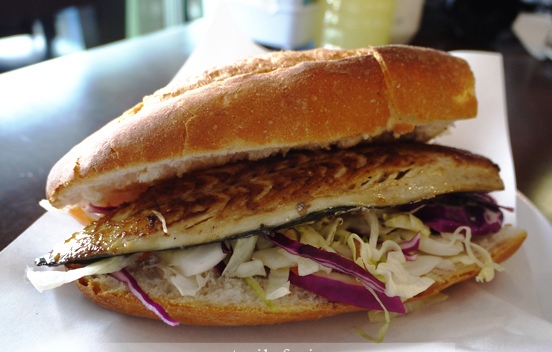 Who would have guessed that the humble baked potato would gain local notoriety as one of the best street foods in Istanbul? Although served all over the city, the district of Ortakoy is widely viewed as the fashionable area to buy it. It is not so much the potato itself that gets people drooling but the wide variety of toppings and fillings, ranging from Russian salad to sweet corn to dollops of stringy melted cheese. Go wild and pile it high because there is one set price regardless of how many fillings you choose. 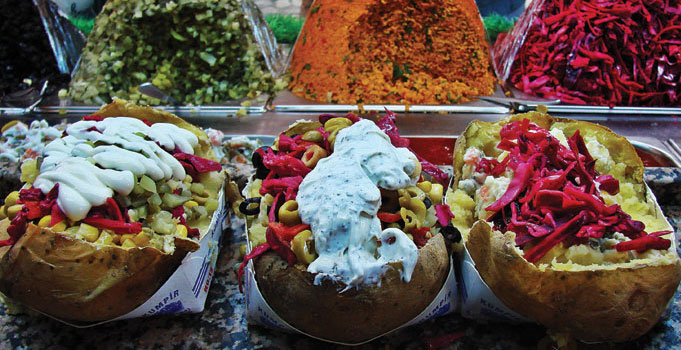 A steamed burger might sound like a gooey mess yet this cheap street food, selling at the entrance to Istiklal Avenue is a top hit with late night drinkers. Lavishly smothered with a tomato and garlic dressing, the steamed bun enhances the flavour of the meat burger sandwiched in between. Some regular partygoers insist the taste is so addictive that going back for seconds is unavoidable.

Other favourites include Midye that is stuffed mussels or Kokorec, a controversial snack made from spicy sheep intestines. Baklava will fulfil any craving for sweet deserts or snacks. The filo pastry dish filled with nuts and covered in syrup has roots across Turkey, Greece, and Armenian but the top quality Turkish version, is made according to recipes from the south-eastern district of Gaziantep of which the Baklavaci Bilgeoglu shop fulfils the criteria by adding heavy helpings of melted butter in the preparation.

An entire holiday can be spent eating just street food because of the diversity of what is for sale but for sit down meals, travellers also dine in a large choice of establishments ranging from the cheap and traditional to gourmet cuisine. 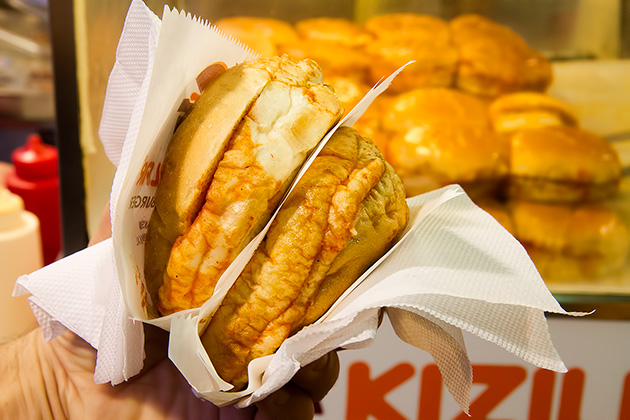 Head For the Traditional Turkish Restaurants

A Turkish “lokanta” is the first stop for diving head first into traditional Turkish cuisine. The aroma from steaming bain maries entices people when they open the doors to order stuffed peppers (dolma) or fasulye (stew.)

Alternatively, the menu displays plentiful choices such as cheap soup served with bread or salad. Certain versions such as tripe or brains often turn the stomach of western visitors who opt for the more simple choices such as lentil or tomato or instead order pide or lamucan. Both consist of dough topped with various fillings such as cheese, sucuk sausage or minced meat and the nearest western equivalent would be a thin pizza.

Vegetarians especially seem to gravitate towards these establishments since traditional Turkish cuisine is heavily vegetable-based, a fact that surprises many foreign visitors who assume meat to be a staple part of the diet. 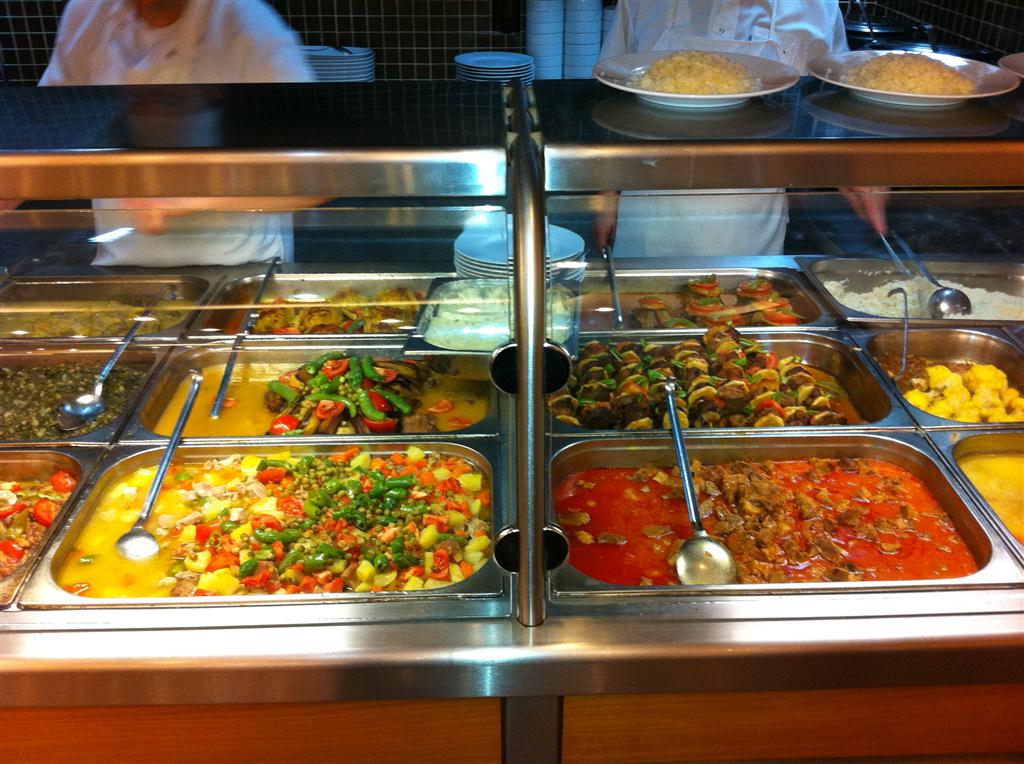 Tasting Turkish food is an essential part of travel, but naturally, sometimes our taste buds hamper after more familiar tastes in which case international restaurants step up to the mark with menus such as Japanese delicacies, curry houses, or French Al a carte.

Trip Advisor lists the top restaurants of Istanbul according to reviews of the time, but many highly esteemed establishments have made their way into timeless classic guidebooks simply because of their settings and originality when it comes to serving food in Istanbul.

Cipriani in the Levent district is one of them and originating from Harrys Bar in Venice, naturally the heavily influenced Italian menu includes classics such as pasta, pizza, and risotto.

Leb-I derya in the Beyoglu district latched onto the fashionable concept of rooftop dining to launch their establishment as a high-class restaurant or cocktail bar. Dishes on their menu include veal steak or warm stone bass with truffle aromatised mushroom puree.

Mikla that opened in 2005 is another favourite of upmarket locals. Having firmly established their reputation after being recommended by the New York Times, they offer a 3-course Al-a-carte menu for 180 lira that includes specials such as North Aegean octopus or Anatolian raw milk cheeses. The owner built his business purely on the concept of redefining traditional Anatolian cuisine. When talking about his restaurant, he says…

"I believe the time has come to rethink the Anatolian kitchen. A new perspective is needed to allow the rich food cultures from the past to survive and evolve. The New Anatolian Kitchen has no boundaries; it is a way of perceiving food, it is a philosophy that can and should be interpreted in many ways.”

Judging from reviews received to date, he has achieved that objective.

Lastly, whether eating in top-notch restaurants or snacking on street food, it is worth mentioning that bakeries are a popular part of the Turkish food scene. Serving savoury and flaky pastry snacks such as spinach and cheese borek, or sweet biscuits such as the Turkish version of shortbread, coffee shops in Istanbul are the go-to places for afternoon refreshments.