If there were ever one landmark in Turkey to defy belief, it is picturesque Pamukkale. This collection of travertine pools in the Denizli province of Aegean Turkey tumble down a hillside face and resemble a fairy-tale cotton castle, hence its nickname. Sitting among excavated ruins from Hierapolis ancient city, which in ancient times, Romans once visited to rest and recuperate following injuries during a battle, Pamukkale was in 2014, the most visited attraction by people taking a trip to Turkey. This is understandable because international travel guidebooks and Internet sites featuring Turkey always mention Pamukkale's wow factor. 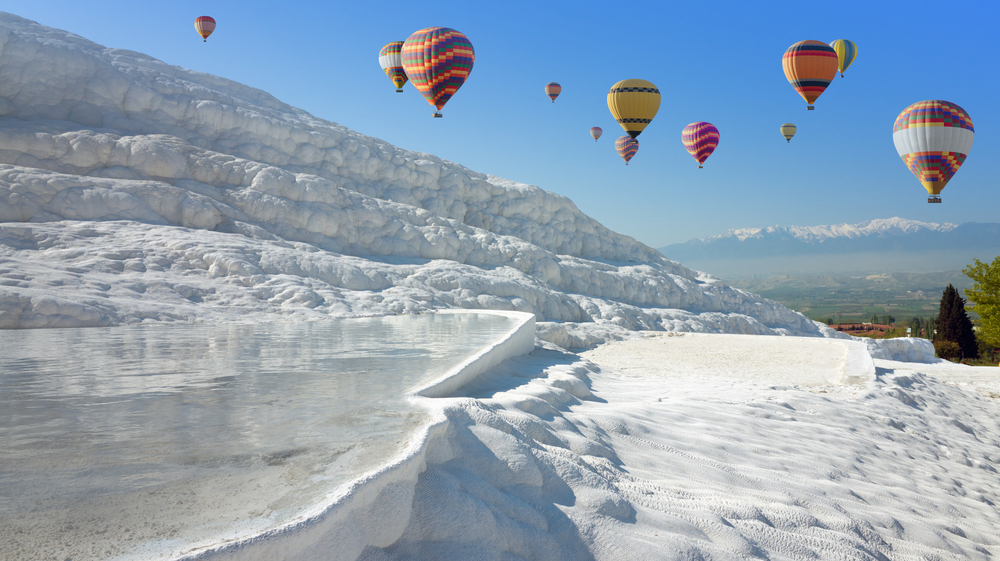 Its future, at times, was shaky. Forty years ago, most people visiting Turkey were independent hippy backpackers who were content to sit admiring the pools in silence while respecting the power of Mother Nature. By the 1990s, Turkey promoted itself as a mass package holiday destination, and crowds soon flocked to see this natural landscape. However, sustainable travel did not exist, and locals had no idea of the impact of mass crowds, instead just seeing another viable income source for them and their families. The seal of tourism firmly stamped on Pamukkale happened when local business people built hotels near the pools. The noise and pollution interrupted the calcium water's natural flowing, the only pure ingredient forming their mystical appearance. Fortunately, Turkish government officials took notice of environmental advisors, demolished the hotels, and regulated travellers' flow, so Pamukkale returned to its natural state.

As you drive up to Pamukkale, past fields rich with soil and heavy with vegetation, you will see what resembles a white blanket covering the hillside. Once past the gates, Pamukkale's pools are within the same grounds as the Hierapolis ruins, the museum displaying ancient Roman sculptures and Cleopatra's hot springs where visitors swim over fallen columns from Hierapolis. The travertine terraces, covering the edge of a hill, and overlooking the village, span a long-distance and officials close some off for cleaning while in others, visitors paddle or, in some cases, pose for a selfie photograph.

Every so often, a security guard blows their whistle loudly as an eager holiday-maker innocently ignores signs and walks onto the travertines with their shoes on. The water's average temperature is roughly 33 degrees Celsius, a drop from its original substance as a hot spring. By the time the water reaches the pools, it becomes a greyish colour, reducing a white cotton castle's appearance. Locals say in summer, such is the warm temperature; a person could bath for six months before they felt the cold. 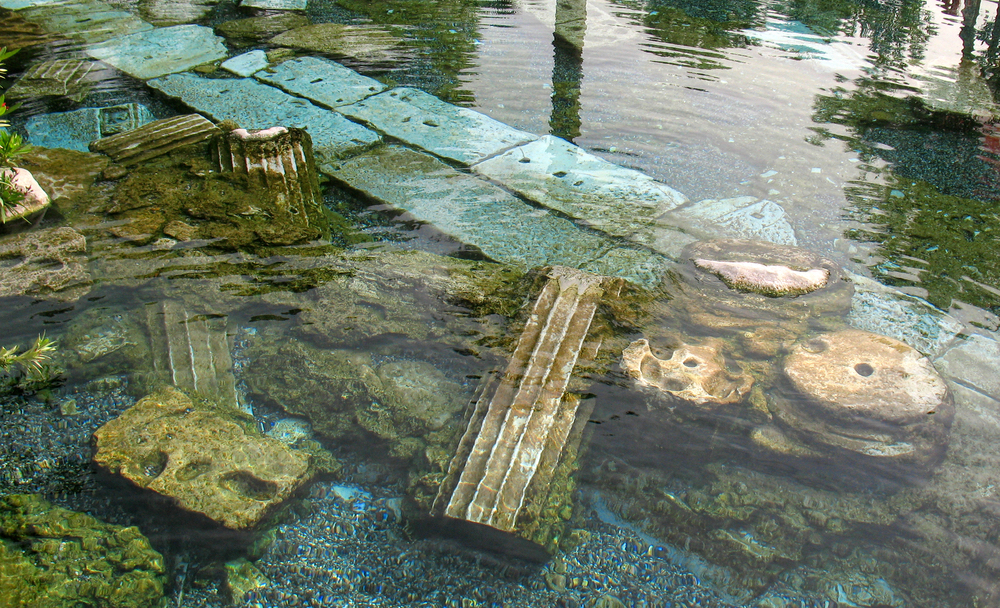 Various ruins and structural buildings from the 2nd century, Hierapolis, sit a short distance near the travertine pools and their thermal water. Translating to the sacred city, painstaking 19th century excavations revealed Christian churches, the northern baths, and Apollo's Temple. The most striking and impressive structure is the sizeable half-circle theatre reached by a short walk uphill. Sitting on the top step is a surreal experience, especially with the knowledge that citizens watched gladiator and wild animal shows within the Roman structure. Throughout history, Hierapolis suffered many setbacks, including earthquakes and epidemic plagues, but the 12th-century Mongol invasion finally marked the beginning of its decline as citizens fled for safety. After the great earthquake of 1219, citizens completely abandoned it and left it for ruins. 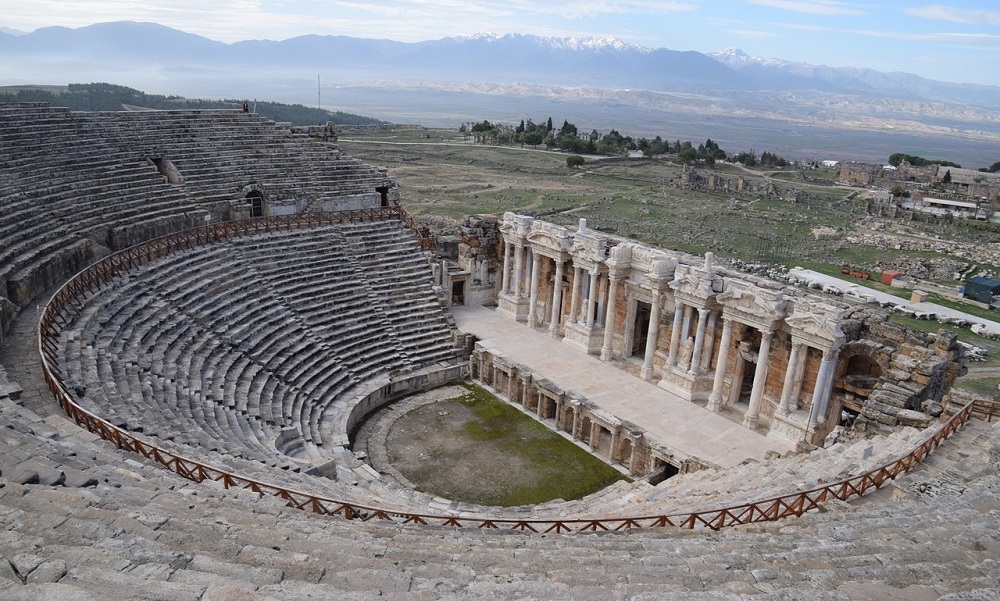 Every week, hundreds of excursion buses travel to see the natural wonders of Pamukkale's thermal springs from nearby seaside resorts like Marmaris, the Bodrum peninsula, Altinkum and Kusadasi. Most are just a day-trip and return later in the evening, which is a shame since the area has more delights to offer. We stayed overnight in the small and traditional rustic village of Pamukkale that, despite the mass of tourists descending on the travertine pools, was quiet and devoid of crowds.

The next morning, we woke up early to journey back to the Aegean coast and stopped by Laodicea, one of the Seven Churches of Revelation. Walking around the ruins only takes an hour and, in the afternoon, we reached the UNESCO World Heritage site of Aphrodisias, known as the city of sculptures. The Aphrodisias Museum, filled with renowned Roman artists' intricate sculptures, is the best in Turkey. Discovered purely by accident in 1959, the museum and its collection of ancient ruins do not receive the credit they deserve.

It is a shame because they are just a 2-hour drive from Pamukkale. Millions of sightseeing people who visit every year also miss other archaeological sites and Turkey's ancient cities. For this reason, we recommend if you do travel to Turkey's most visited attraction of Pamukkale, stay overnight and enjoy other equally glorious attractions in the nearby countryside. 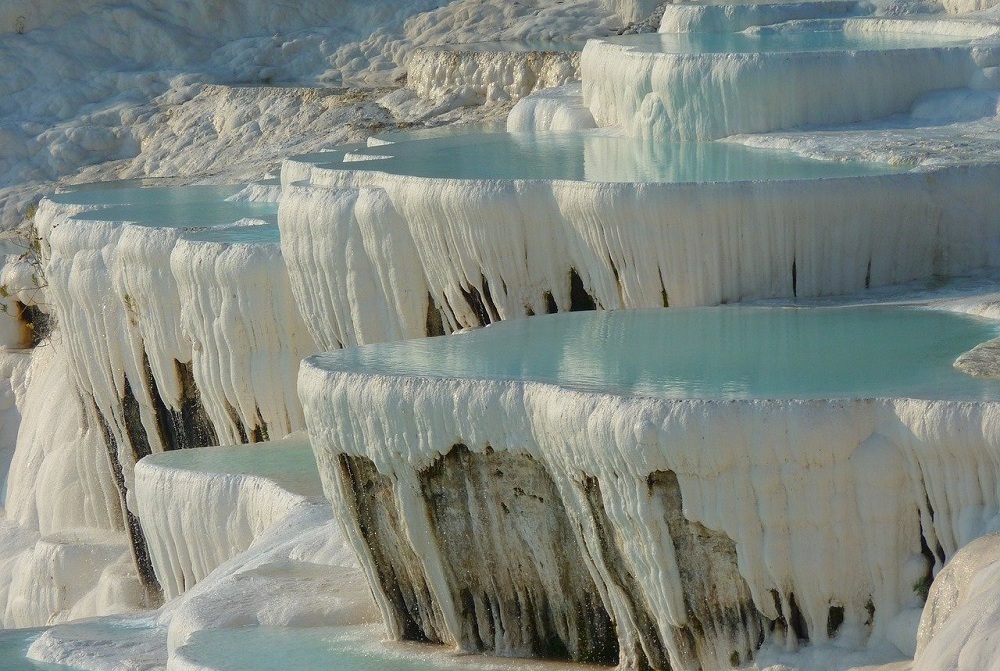 Istanbul Old City: As home to the former Byzantine and Ottoman empires, Istanbul city garners fame from all around the world because of its preserved Sultanahmet landmarks like the Basilica cistern, hippodrome, Blue Mosque, Hagia Sophia and Topkapi Palace. Uniquely sitting on two continents, the Bosphorus straits, Grand Bazaar, Galata Tower and Taksim areas are other top touristic spots.

Ruins of Ephesus: Sitting within the Selcuk region of western Turkey, this monumental ancient city nearly rivalled Rome. Such is its importance; it also sits nearby the Virgin Mary house, believed to be where she ascended and the Temple of Artemis, one of the seven wonders of the ancient world. Indeed, it is one of Turkey's more unique cities and should be on your itinerary.

Beautiful Cappadocia: As the Anatolia region’s highlight, Cappadocia is home to the Goreme open-air museum, weird rock formations, beautiful valleys, many underground cities, and known for its early morning hot air balloon rides. Stay in one of many villages, and enjoy learning about its importance in the ancient world, as a centre of Christianity, as seen in Biblical frescoes of old churches.

Mediterranean Coastline: Featuring major holiday hubs like Antalya, Oludeniz and Fethiye, the southern seacoast is also known as the Turquoise coast, a corner of gulet boat cruises, the Taurus mountains, beautiful coves, and riviera sailing. It also features the 500-kilometre Lycian way. Many a traveller on a visit to Turkey tours the Med after seeing the treasures of Pamukkale’s Tourist attractions.