About Turkey Pamukkale in Turkey guide | The Cotton Castle 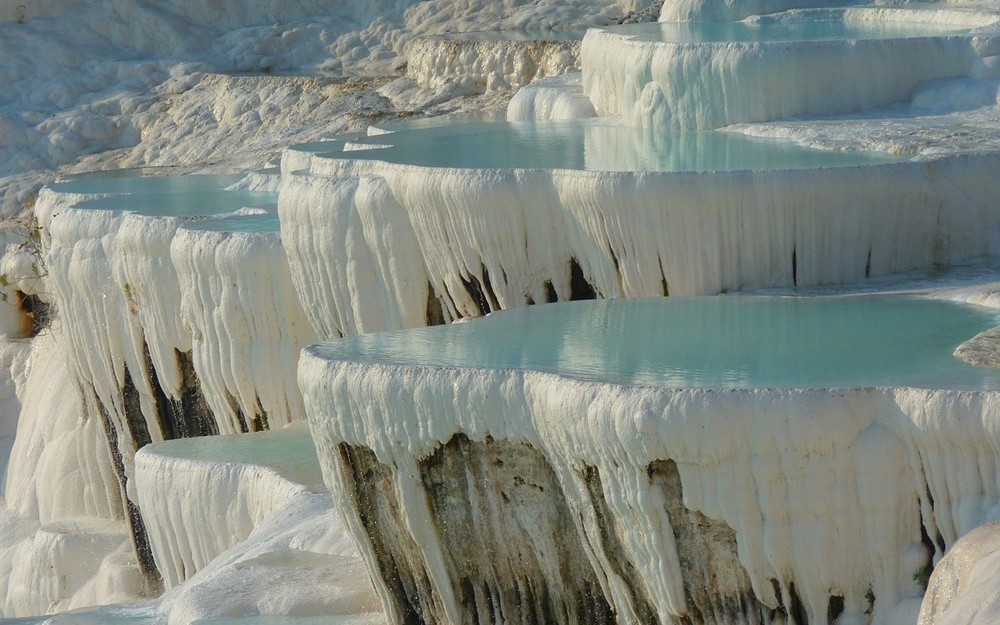 Sitting in the Denizli province of Aegean Turkey, Pamukkale and Hierapolis are Mother Nature's perfection and a majestic manmade, ancient city. Pamukkale translates into Cotton castle, an apt reflection of hot springs and descending terraces of carbonate minerals formed by flowing waters over thousands of years. For thousands of years, bathers and worshippers used Pamukkale travertine pools for spiritual and commercial use until tourism overtook about sixty years ago during the famous hippie trail. Hierapolis ancient ruins, a Greco-Roman and Byzantine city, sits nearby. If you haven't already been to Pamukkale, you should put the site on your bucket list.

About Pamukkale and Hierapolis

Although the pools might seem like miracles, science easily explains them. Formed by mineral water from hot springs, deposited calcium carbonate slowly crystalises over time. The entire white castle is around 2700 metres long and 600 metres wide. It is so large that locals see it from hills on the valley's opposing side, 20 kilometres away. Seventeen hot springs range from 35 degrees Celsius to a (literally) boiling 100 degrees. During summer, a walk around Pamukkale means being under the full mid-day sun, so take a hat and sunglasses to avoid rays that bounce off the chalky cascades. Unfortunately, visitors can't wear shoes because officials want to preserve Pamukkale's travertine pools, so remember this if visiting in winter. Access bathing pools by the toll booths and climb up the cascades barefoot, or enter from Hierapolis, which is easier to avoid the climb - but miss the travertine's beauty.

Unlike other ancient cities in Turkey, historians are unsure about the beginnings of Hierapolis. Historians estimate a temple uncovered during excavations dates from the 7th century BC. But the actual status of Hierapolis as a hot spa healing centre dates from the 2nd century BC. The name Hierapolis means the holy city, but its status revolved around hot springs, which used to see people from afar to enjoy various health benefits. In 133 BC, the Romans came to rule after the deceased king, Attalus, the third handed power to them. An earthquake in 17AD destroyed much of Hierapolis, but the city rose again to become Christian through the influence of Paul, who at the time lived in Ephesus. By the 4th century, Christianity was dominant. While touring landmark buildings, don't miss the 12,000-seat Roman amphitheatre with the majestic front facade.

Pamukkale Museum requires an extra entrance fee, but it is worth seeing artefacts from ancient cities like nearby Laodicea. The old Hierapolis Roman Bath is where the archaeology museum sits, and the museum also features several beautiful examples of Bronze Age craft. The museum set out over three closed and open side areas was once a library and gymnasium. The museum takes just 20 minutes to explore, but visitors should also head to Cleopatra's pool, a short walk away. Once again, there is an additional entrance fee, but worth it to swim over fallen columns resting in spring waters and grab some refreshments and lunch.

Over Tourism and UNESCO Status

When tourism at Pamukkale travertine pools reached an all-time, foot traffic caused significant damage, and some scientists wondered if they would still be around in years to come. Additionally, hotels over Hierapolis ruins caused foundation damage. Roads in and out also damaged the natural aesthetics of Pamukkale. Thankfully, when UNESCO added Pamukkale to their world heritage site list, Turkey's government closed hotels and banned foot traffic. Slowly over time, the travertine pools returned to their natural state.

Many visitors twin a visit to Pamukkale and Hierapolis with Ephesus ancient city in the Aegean region of Seljuk. Known as one of the Bible's Seven Churches of Revelation, the city is, along with Pamukkale, a popular attraction. This article about Ephesus discusses significant landmark buildings and highlights, including the Roman terrace houses, amphitheatre, Agora, and famous Celsius library.

Other Places to Visit in Turkey: Although Pamukkale and Hierapolis are Turkey's top visited attractions, many other places deserve admiration and make for wonderful exploration. This article lists top places to visit from north to west of Turkey, why they stand out, and what to see and do while there.