Everything You Need to Know about Getting Married in Turkey

Idyllic beaches, golden sunsets, stylish settings and the 'oh-so-close-to-paradise' feelings have helped contribute to a boom in recent years of European couples planning to say "I do" on Turkish soil. If you are looking at Turkey as the destination for what should be the best day of your life, here are some handy tips and practical steps to ensure arranging it goes as smoothly as possible.

How To Get Married in Turkey

Foreign marriages on Turkish soil are not legal, so whatever decision is made over the actual formalities - religious or otherwise - the official wedding ceremony should take place in the country where you permanently reside. In March 1, 2014, the rules changed for foreign couples looking to marry in Turkey and the process is now more simplified than under previous arrangements.

Turkish marriage offices accept an affidavit/affirmation of marital status sworn before a UK Public Notary or embassy/consulate in Turkey depending on the couple’s residency status. The embassies/consulates in Turkey no longer issue certificates of non-impediments in Turkish.

Before arriving in Turkey, couples must complete a bilingual affirmation form and their oath or affirmation should be administered by a local Public Notary in their country of permanent residence and legalised by the government's Foreign Office Legalisation Department.

The certificates of no impediment, identity, and nationality need to be authenticated by the local governor’s office in Turkey and these documents can be taken to the local marriage office in the town or city where you intend to marry as part of an application to give notice of marriage and arrange a date for the wedding.

These other documents may include a divorce or death certificate if married previously; a health certificate following a medical examination at a local hospital in Turkey; six passport sized images and a document reflecting any change in the birth name.

The couple, if foreign, need to obtain an accommodation paper, outlining the number of days stay and date of leaving, from the hotel they are staying at. The wedding then takes place, usually with the registrar present. If the couples do not speak Turkish, employ the services of a local translator to be present during the ceremony.

Are You Resident in Turkey?

If you are a resident in Turkey, then under the new laws, couples can complete a bilingual affirmation form and book an appointment at their relevant embassy for the administering of their oath or affirmation.

The document must be legalised by the Turkish authorities, either by the Ministry of Foreign Affairs in Ankara or the local governor's office. Once it is legalised, it needs to be submitted to the local marriage office.

Once the affidavits are legalised, documentation is complete and this validity period lasts for 180 days. You will also need to present your passports to the marriage office.

For most, the location is one of the most important factors and the good news is that Turkey has so many beautiful choices that make ideal destinations for weddings.

Whether it's a beach in the much-highlighted areas of Bodrum, Marmaris, or Fethiye; or on the Mediterranean or Aegean seas on a yacht, or, with permission, a historical setting - such as the ruins of the Apollo Temple in Didim - then you will be spoilt for choice.

In recent times, couples have been taking the marriage location one step beyond: below the sea as divers with a ceremony, wedding rings exchanged and boards saying: "I thee wed."

Another potential theme is actually in a submarine beneath the sea. Antalya has just received a small submarine for tourism purposes, but it will not be beyond the realms of imagination, that the organisers follow the line of other submarine operators in the Maldives, to have weddings conducted below sea level. 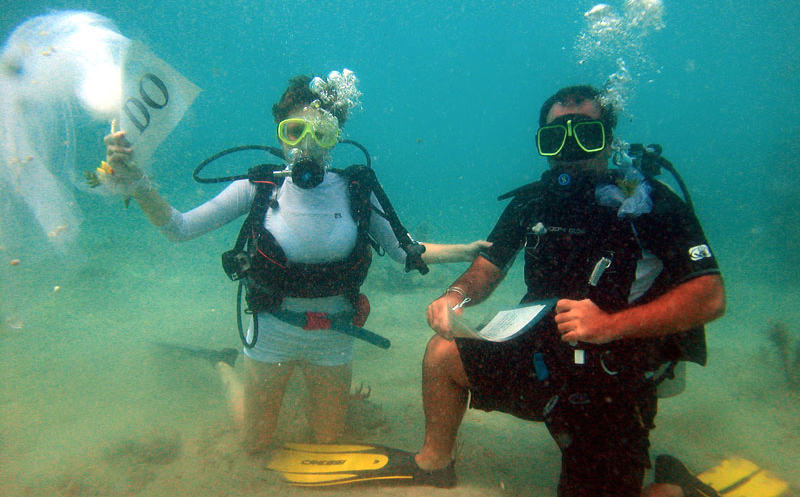 How Much does it Cost?

The average cost of a wedding in the UK now stands at an eye-watering £24,000. While the expense of a wedding in Turkey can fluctuate, depending on the currency rate of the day, in most cases, it can be as less than half that figure. So for the budget conscious, Turkey is an affordable candidate for a wedding, while still retaining all the trimmings.

Are You Still Uncertain?

If you are still unsure about where you stand on getting wed in Turkey, then consult either your local Embassy in Turkey; the Turkish Consulate in your home country, or a solicitor to discuss any legal formalities.

As Turkey is abundant in beaches, history, and magnificent cities, such as Istanbul and Izmir, as well as getting married in the country, a romantic honeymoon would be ideal. So check out the possibility of a three-in-one solution to your wedding - with marriage, a honeymoon and well needed holiday all combined.