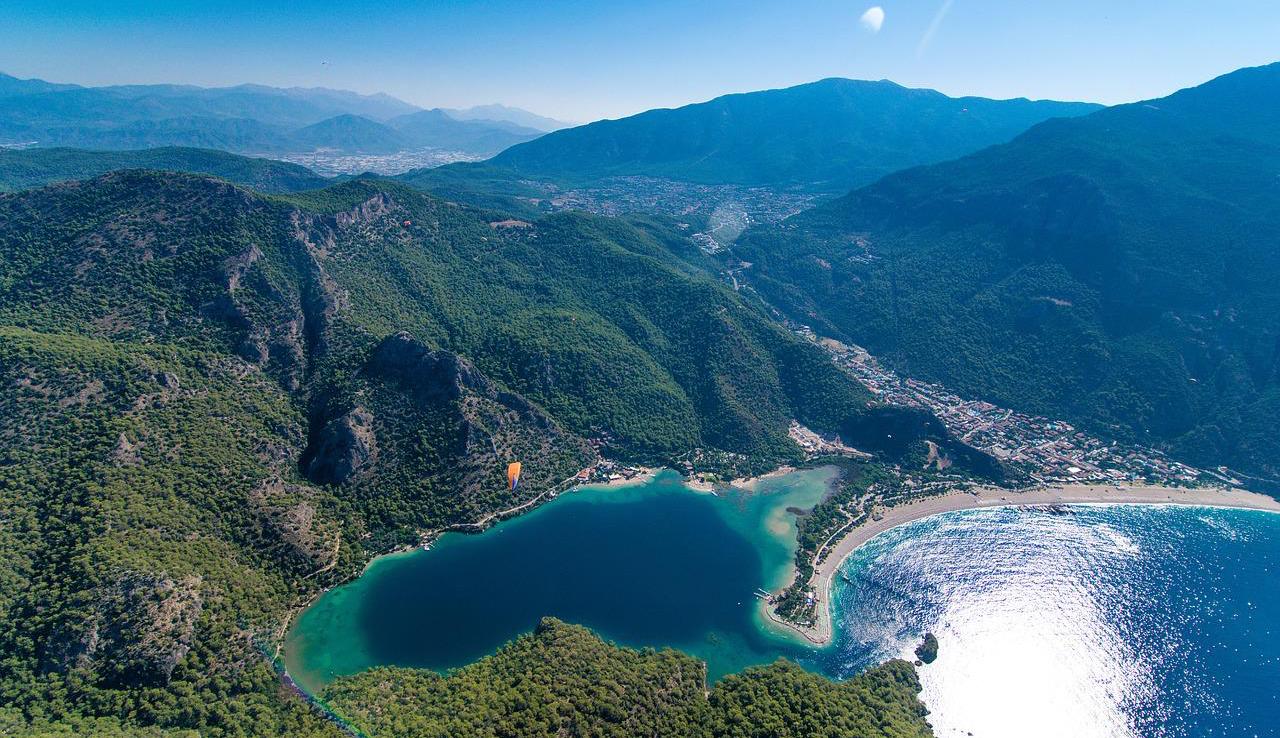 To visit Oludeniz beach is to experience one of Mediterranean Turkey’s most scenic landscapes. Separating into two parts, Belcekiz and the Blue Lagoon, tourists have flocked to Oludeniz beach in Fethiye since mainstream travel went global nearly 50 years ago. Overlooked by Babadag Mountain, Oludeniz’s location, nestled into a green valley dropping down from Hisaronu or Ovacik villages, opens marvellous views of sparkling turquoise water and white sand. The 14-kilometre drive to Oludeniz Beach from nearby Fethiye Town centre or just five minutes from either Ovacik or Hisaronu explains the intense popularity of these two towns for those who wish to buy beach property in Turkey.

About Oludeniz Beach in Fethiye

Oludeniz translates into the dead sea, but don’t expect doom and gloom. Instead, expect stunning scenery and turquoise lures of Turkey’s Mediterranean Sea. Construction in Oludeniz beach, a protected nature reserve of Fethiye, is strictly prohibited. This ensures Oludeniz Beach retains Blue Flag status, and the long stretch of sand is frequently voted as a global beach.

Babadag Mountain is a popular jump-off point for paragliders, so while on Belcekiz beach, watch for several colourful parachutes slowly winding their way down towards you. Other activities include parasailing and jet-skiing. For lunch, and a break from sunbathing on Oludeniz beach, avail yourself of many affordable beach bars or restaurants serving up cocktails and seafood meals.

The Lycian Way: Turkey’s Lycian Way begins here for those who love getting active. The 510-kilometre trail traverses the coastline, eventually ending at Olympos ruins and beach. From Oludeniz Beach, walk up the hill to begin the trek. Along the way, trekkers visit various numerous ancient cities that once belonged to the Lycian empire and, in the case of some like Patara, the tremendous Ionian league.

Oludeniz and an Urban Legend

It is not unusual for beach areas in Turkey to feature stories of urban legends. Regarding Oludeniz, the urban legend focuses sadly on lost love and despair. It starts many years ago, with stories of a father and son. They regularly sailed past Oludeniz. The son went ashore to get drinking water on one such trip and spotted a beautiful girl. Her name was Belcekiz, hence the name. They fell in love and went on many walks together, and on one, she revealed the Blue Lagoon to him. However, during a storm in which the son tried to get his father to take shelter in the Blue Lagoon, the father accidentally pushed his son overboard. Belcekiz saw everything from the Blue Lagoon cliffs and threw herself off them.

Oludeniz does not have jetty or marina facilities because of prohibited construction, but boat trips leave every morning during summer from the main stretch of sand. They include lunch and swimming breaks while sailing along Fethiye’s coastline to admire scenic landscapes from the sea. Places they visit include…

Butterfly Valley: Near Faralya village, a broad valley formed by two rock formations is fronted by a pebbly beach. Butterflies breed there, so residents called the valley Kelebek Vadesi. For many years this valley of Fethiye lay unnoticed, but in 1981, the Anatolia Tourism Development Cooperative signed a deal with village inhabitants. Three years later, they opened for tourism, and hippy backpackers flocked to experience being at one with nature. They enjoyed bohemian vibes and the secluded atmosphere away from the rat race.

Gemiler Island: Gemiler Island in Fethiye is unusual compared to other ancient cities. There are no public buildings, theatres, baths, or agora. Simply four churches, a few homes, tombs, a graveyard, and a cistern. As an exciting island of Fethiye to explore, a small jetty leads to a path that takes in the remaining ancient structures. Father Christmas, whose original name was Saint Nicholas, spent time on Gemiler island. Still, a favourite thing to do is watch spectacular orange sunset views disappearing over the horizon from the hilltops.

Places to Visit in Fethiye: Oludeniz beach and the Blue Lagoon are Fethiye’s best sights, but there are other delights to explore, from ghost villages to ancient cities to fun things for the family. Easily access all these places from Oludeniz by bus or join a tour run by travel agents within the Fethiye region of Turkey.