Turkey often appears in some of the most prestigious international magazines around the world and for a good reason. The country, covering more than 300,000 square miles has thousands of gorgeous landscape views.

From the east to the west, the power of Mother Nature is displayed in all its glory through natural scenery that amazes travellers and leaves a lasting impression. One such view is the Antalya coastline that receives 300 days of sunshine a year, and the best way to see it is from the 2365-metre high and majestic Mount Tahtali. 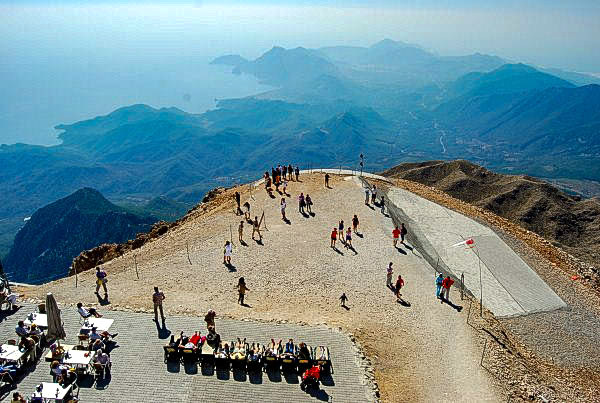 Called Tahtali Dagi in Turkish, the domineering mountain stands near the Kemer holiday resort in the metropolitan region of Antalya. Also within the boundaries of the preserved Beydaglari National Park, it was known in history as Olympos and home of the gods, although this name has been applied to numerous mountains in Turkey.

Its high altitude often ensures a thin covering of snow, ice or fog but during summer, when the air is clear, its close proximity to the coastline projects a stunning all-encompassing view of the coastal resorts, beaches and on the opposite side, the Taurus mountains that undeniably makes any visitor appreciative of our planet.

Standing at the base of the mountain is the ruins of the ancient city of Phaselis and from here; the sight of Mount Tahtali dominates every angle. 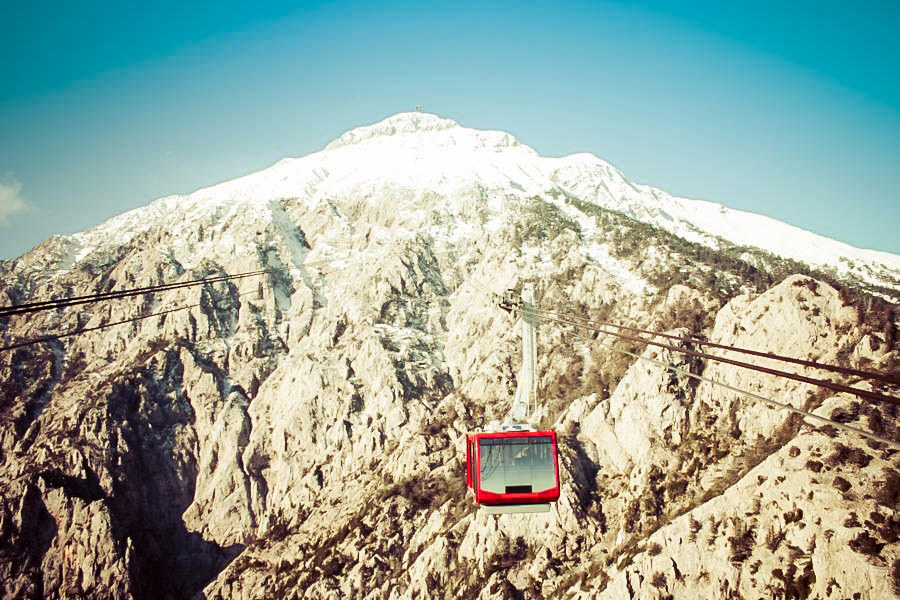 Called Teleferik in Turkish, the unique combination of the warm Mediterranean Sea combined with the snow-capped Mount Tahtali prompted a company to create the “Sea to Sky” concept, a 4395 cable car ride that is one of the longest in the world. Visitors, first of all, drive through winding mountain roads of the Beydaglari National Park to reach the base-summit at 735 metres above sea level.

Every day, at numerous times, two cable cars that can accommodate up to 25 people each, take the short 20-minute ride up to the next summit standing at 2365 metres above sea level. Passing over the dense forestation to ascend the mountainside, passengers disembark to a viewing platform around the building that gives off a 360 panoramic view. Viewing Binoculars are available for those who want to get clear on detail. Otherwise, an onsite refreshment serving drinks and food accommodates many people who choose to savour the moment for longer.

An exciting opportunity comes though when you decide how you want to go back down. Play it safe by taking the cable car ride or anyone who loves an adrenaline rush can buy a tandem paraglide ride with an experienced pilot who will take you over the coastline for another different, but equally stunning view. 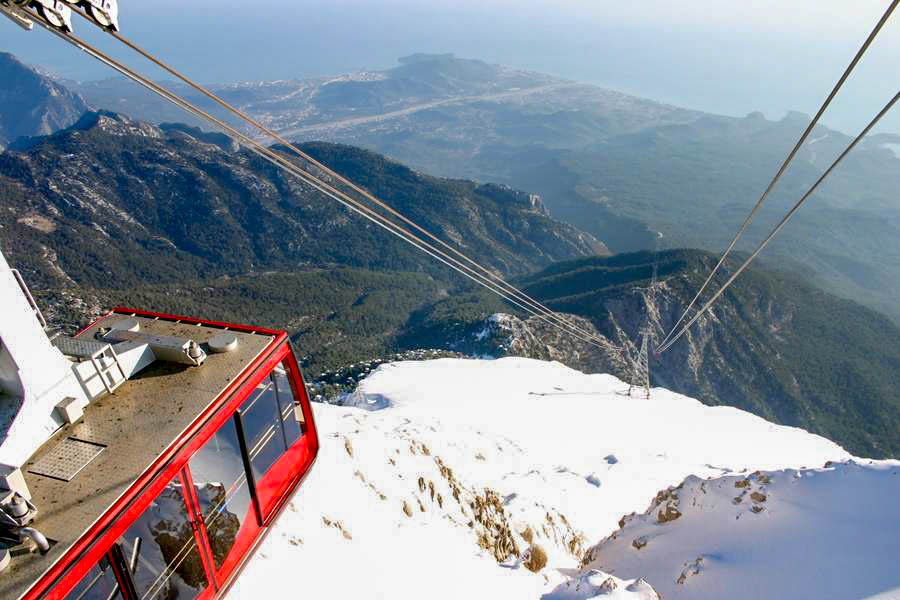 The Mount Tahtali cable car ride is open all year round except in severe weather. Opening and closing times vary during winter and summer, from 9 am to 7 pm. During summer, they also offer planned sunrise and sunset excursions that are sold by most local travel agents in Antalya. The same travel agents also sell daily tickets for the cable car ride including a pickup service from your hotel in the Kemer district. 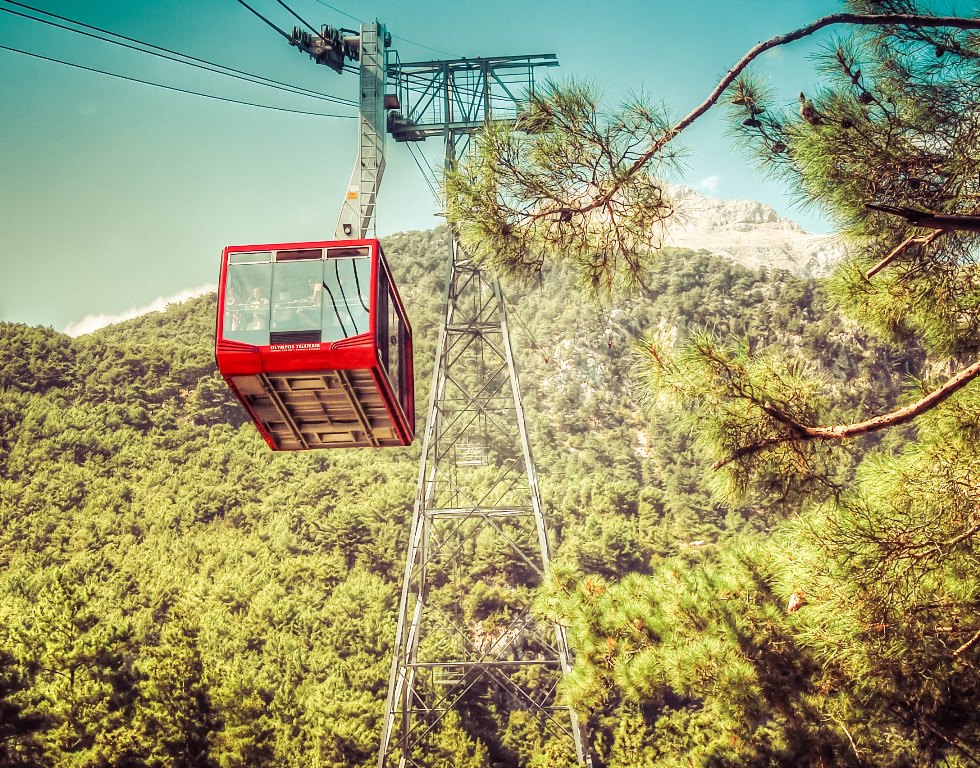 Other Places to Visit Nearby

Despite the location of Mount Tahtali, it is extremely close to the main D400 coastal road and other nearby attractions, both historical and modern. By renting a car, it is possible to have a great family day out without travelling long distances. Just half an hour’s drive away is the majestic ruins and half circle beaches of Phaselis. As a former sea trading port constantly raided by pirates, it was deserted and is now a collection of impressive, excavated ruins sitting between two beaches.

45 minutes’ drive away are the small and rustic coastal resorts of Cirali and Olympos where depending on time, you might want to spend the night to see the burning flames of Chimaera. Used by sailors in ancient days to warn them of rocks, they were a mythological wonder because the flames burned 24 hours a day, 7 days a week. Scientists have easily explained the mystery as natural gases oozing out of the rocks but people still walk the winding hilly path at nighttime to see the flames.

Cirali and Olympos also share a long beach, which is mostly pebbly, but backing it are the ancient ruins of Olympos city that hold the sarcophagus of Captain Eudemos. The ruins sitting in among the forest almost have a surreal fairy-tale ambiance to them and also include ancient churches.

Otherwise, drive in completely the opposite direction for one hour to explore the main centre of Antalya. As well as the Duden waterfalls that finish by dropping off into the Mediterranean Sea Antalya city centre despite its modern vibes boasts of a delightful area called the old town. Known in Turkish as Kaleici, the entrance, marked by the impressive Hadrian’s gate, leads visitors down cobbled paths, lined on each side with old Ottoman houses. Finish the day with a meal down by the harbour where restaurants serve fresh Mediterranean dishes such as fish and mezes.