Bosphorus Villages of Istanbul to Fall in Love With

The Bosphorus villages of Istanbul don't earn as much fame as the old Sultanahmet touristic district or Beyoglu, Galata and Taksim. Yet they are just as important to Istanbul, a city commanding countrywide and international respect. Most people know Istanbul separates into two continents, Asia and Europe, via the Bosphorus strait. Yet this stretch of water signifies much more and is a crucial maritime route for trade between Asia, Europe, and Russia.

This critical fact means that for centuries, empires fought to gain control of the Bosphorus straits because winning would instantly give them more global power and leverage. Thankfully these days, intense and bloody battles over the Bosphorus don't happen. Instead, the shoreline is prime Istanbul real estate and ideal for independent travellers to explore lesser-known districts. From plush houses to old mosques and churches, European Istanbul has 17 villages, while the Asian side has 12. So let's look at which villages to visit.

This delightful Bosphorus village in Istanbul’s Besiktas area has become more famous over the last five years. Indeed, Arnavutkoy is no longer a well-kept secret. Istanbul locals always flock there at weekends to enjoy daily vibes; hence traffic can be heavy. Time your visit well for great insights into old Ottoman houses lining the streets and a fishing village ambience around the Bosphorus shoreline. Fish restaurants are big business in Arnavutkoy, but also detour to visit the Greek orthodox church. Arnavutkoy isn't about museums and attractions but more about soaking up the atmosphere of shoreline villages in Turkey's biggest city. 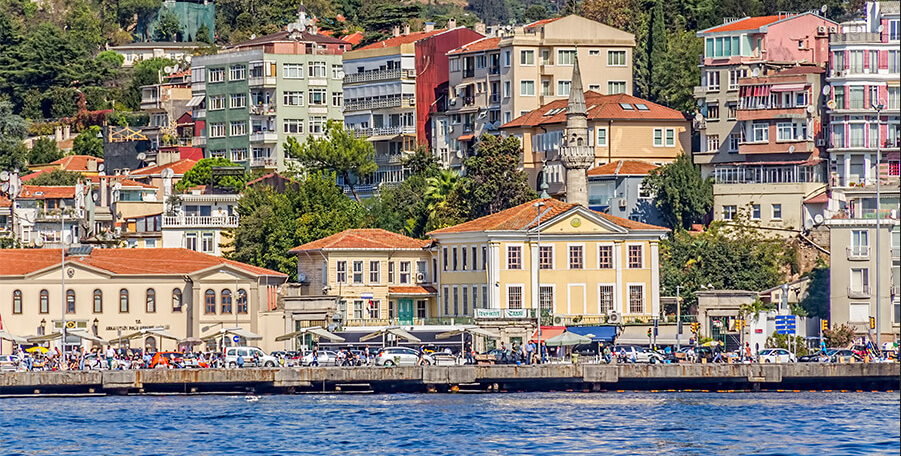 Many people may have seen glimpses of Ortakoy without realising it. The shoreline mosque with the background bridge silhouette often appears on postcards and in travel magazines. Also sitting within the Besiktas district, for centuries, Ortakoy was known for its multicultural communities of Greeks, Armenian, Turks and Jews. This tradition continues today, but Ortakoy has a reputation as the ideal place to hang out, hence the numerous bars and restaurants. Ortakoy's two seaside nightclubs also suit those who want to party until dawn. When visiting Ortakoy, go to Kumpir alley and the stores selling Istanbul's best jacket potatoes.

3: The Upmarket Village of Bebek

To see the flash and trendy face of the Bosphorus, head to Bebek, a small shoreline village tucked in next to Arnavutkoy. Because of the shorefront location and prestigious reputation, houses in Bebeksell for top money. So naturally, as with any high-profile district, the nightlife scene involves social exclusivity. During the day, locals often sit in the seaside cafes and enjoy lives of leisure. During summer, many luxury yachts sit just off the sea, another sign of Bebek's affluent. Unlike neighbouring Arnavutkoy, there aren't historical sites in Bebek, but life is about socialising, pleasure and leisure by the Bosphorus. 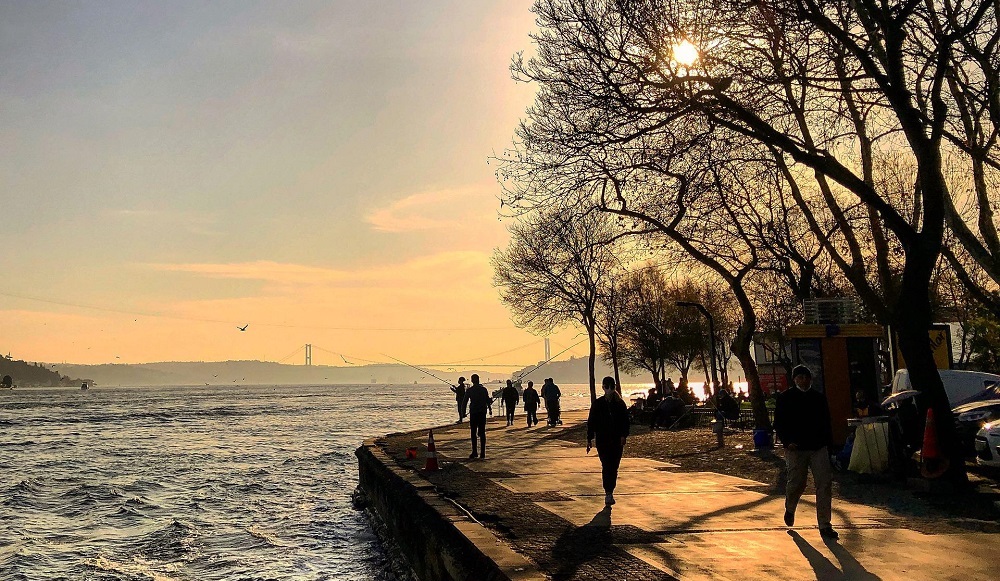 On the real estate market, middle-class Emirgan commands respect. For day trippers and curious travellers, Emirgan offers numerous points of attraction with great insights into the Bosphorus history. Officially belonging to the Sariyer district, reach Emigan via multiple ferry routes that sail up and down the Bosphorus and give an alternative view into shoreline landmarks. Visit Emirgan park, especially during April, when the council plants thousands of tulips for the annual tulip festival. The 500,000 square metre park features three Ottoman pavilions serving snacks and refreshments, making this place ideal for family weekends, while the Sakip Sabanci museum highlights fine art, calligraphy, and antique furniture. The Hamid Evvel Mosque also sits by the waterside, and although closed to the public, watch out for the 18th-century Safifler waterside mansion.

If you are looking for property in Istanbul and have money, Tarabya will fulfil your expectations and more. Also belonging to Sariyer, and sitting in between Kirecburnu and Yenikoy, in history, most foreign embassies had summer houses in this neighbourhood. This trend has continued, with some countries setting up their consulates here. There is a famous tale about how the neighbourhood name came to be. The Ottoman sultan Selim the second always headed here for rest, relaxation, and fishing expeditions. He adored the area and commissioned a summer palace called Tarabiye, meaning pleasure. That vibe shines daily, with restaurants, cafes and bars highlighting the finer side of Istanbul life.

Sitting just at the foot of the Bosphorus Bridge, Beylerbeyi belongs to Asian Istanbul and portrays life away from the famous European districts. The old name of Beylerbeyi was Stavros, meaning cross and reflecting the one built there during the Byzantine period. In the 16th century, the name changed, and the neighbourhood became a popular retreat for Ottoman sultans during summer. Hence the famous shoreline Beylerbeyi palace featuring stunning European baroque-style architecture. The palace's extensive gardens spread over 70,000 square metre’s amaze everyone. The palace is delightful but stroll the side streets for numerous souvenir shops and restaurants selling traditional seafood items that Bosphorus villages are known for. Also, keep an eye out for the 18th-century Beylerbeyi mosque and the nearby Turkish baths to relax in Turkish style.

So, you might think exploring Bosphorus villages is about parks, tea gardens and historical palaces. But European Kilyos steps forward for beaches, making the village a popular getaway for Istanbul Turks. Sitting about 30 minutes’ drive from the centre, combine this trip with visits to Belgrad forest, which you must pass through to reach. Kilyos doesn't face the Bosphorus, but instead, the black sea, so be aware that waters get choppy at certain times. So naturally, given its coastline position, fish restaurants host hundreds of diners daily. Historical places to visit away from the beaches include Kilyos castle, the old town, and the famous 550-year-old Sycamore tree.

Most Bosphorus villages stand out for good reasons, and in the case of Kanlica, this is yoghurt, not just any old yoghurt. Immediately upon arriving, you should seek out vendors who sell the local dish of yoghurt sprinkled with caster sugar. Otherwise, one big shame is that a 16th-century mosque by Mimar Sinan, the Ottoman empire's most famous architect, was built here, but unfortunately, no trace remains. These days, Kanlica is home to historic shoreline mansions, which will undoubtedly dent your bank balance should you buy one. The other claim to fame is as the starting point for the famous 6.5-kilometre Bosphorus Intercontinental swim that finishes on the opposite continent.

Sitting in Asian Istanbul, Cengelkoy originally got its name because, during the Ottoman empire, ship anchors were made here. Once again, much of daily life in Cengelkoy revolves around the shoreline, where you can stroll the streets and enjoy refreshments in shoreline cafes while watching the world go by. Pastry shops do good business in Cengelkoy, thanks to excellent tasty snacks. In addition, fishing fans flock to the beach for daily fresh catches. Other places of interest include the Cinaralti mosque, tea garden, and Sadullah Pasha mansion. Otherwise, head inland to seek out Seyh Nevruz mosque and Sevda hill, a popular place of scenic beauty where films are often shot. Finally, many Turks flock to Cengelkoy to enjoy traditional Turkish breakfasts with Bosphorus views.

Visiting Rumelifeeri makes it hard to believe this small village belongs to Turkey's largest and most prominent city. Its northern Bosphorus location joining the black sea makes Rumelifeneri a world apart. Belonging to Sariyer, the village takes its name after the local lighthouse. Before World War I, Greeks lived in the village, hence Saint George church, another local landmark. Rumelifeneri still maintains fishing vibes, highlighting the village for locals who want to escape Istanbul's hustle and bustle. Istanbul tour agents sell daily excursion tickets as well. While there, sample traditional seafood dishes that will keep you going back for seconds.

Also, About the Bosphorus and Istanbul

Yali Mansions: 620 Yali mansions of Istanbul sit on the Bosphorus shores alongside castles and old Ottoman palaces. Along with Princes Islands houses, they form part of Istanbul's elite property market, with some listed as Turkey's most expensive properties. The city with three names, Byzantium, Constantinople, and Istanbul, offers complicated tales from history, traditions and intrigue combined with prestigious status as Turkey's top tourism destination. Indeed, Istanbul's past is evident and in full sight for everyone to see via these luxury mansions.

Ottoman Palaces in Istanbul: Screaming of luxury, extravagance and untold wealth, palaces worldwide typically garner everyone's attention. Used either as homes of royal residence or as property investments of billionaires, they signify more refined living. While some global palaces are still in use, others have become museums, highlighting their country's historical timeline. Istanbul has housed and hosted famous figures throughout history. The palaces perfectly portray their stories and are great to see while exploring the Bosphorus villages of Istanbul. 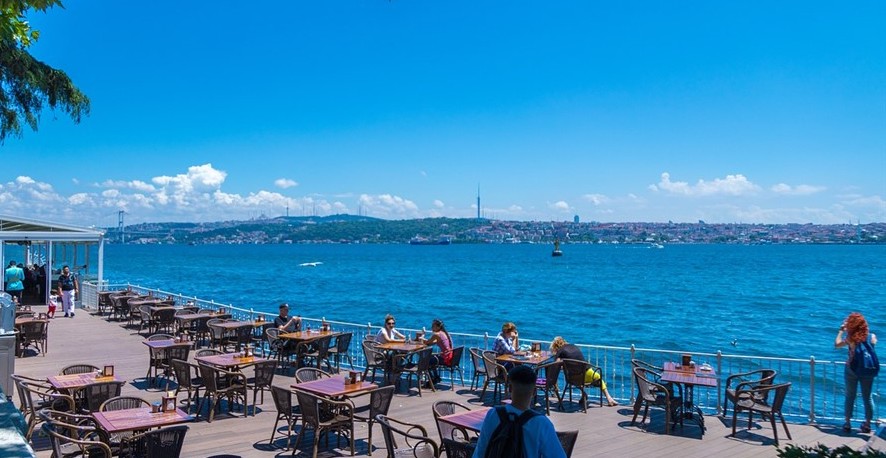