Best places to visit in Turkey during January?

Visiting Turkey during January presents an entirely different face to the country than the typical sunny, beachside resorts appearing in mainstream holiday brochures. As Turkey's coldest month, naturally, sunning yourself on beaches in January would be a fool's game. But this still leaves plenty of other places to go and things to do. Some destinations shine through in January, and tourists often bag themselves good deals through cheaper flights and hotel bookings. The first question that people often ask us about this month is temperatures. However, Turkey has several different geographical and weather zones.

The east and north experience the coldest temperatures while the Mediterranean southern coast is the hottest. Northern temperatures drop as much as minus in places like the high altitude Kackar mountains, yet sunny Antalya in Mediterranean Turkey averages between 10 to 20 degrees. But regardless of where you go, we promise a fantastic trip where cultural heritage and sites of natural beauty blend to make perfect memories. So, let us look at Turkey's top six places to visit during January and what to do when you get there.

Places to Visit in Turkey during January

Despite not being Turkey's capital city, Istanbul is to the country, what Rome is to Italy and Paris is to France. As Turkey's poster child of tourism, and the main reason many people visit, Istanbul is Turkey's beating heart, averaging 15 million tourists a year. Built on seven hills to match Rome's reputation, ruling empires included the Byzantine and ottomans. First-Time visitors should start their exploration in Sultanahmet, home to a collection of historical landmarks including Topkapi Palace, the Blue Mosque, Hagia Sophia, Basilica Cistern, and hippodrome.

Next, walk the short distance to the Grand Bazaar, a massive labyrinth of passageways featuring thousands of stalls. Dating from the Ottoman empire, the Grand Bazaar, Turkey's oldest and largest market, is a great place to shop for souvenirs, but remember to practise your Turkish bargaining skills. Breaking down into two continents, Istanbul features the famous Golden Horn and Bosphorus waterways. Crossing the Golden Horn via Galata bridge leads to Galata Tower and then new Istanbul, known as Beyoglu and Taksim.

Istiklal avenue, Turkey's longest street, blends modern, brand name shops and dining establishments with old landmark buildings like the flower passage and Saint Anthony of Padua church. Next, explore the Bosphorus shores, brimming with old mosques, villages and Ottoman houses and mansions, via ferry rides, or cross over to Asian Istanbul to wander streets of the shoreline Uskudar and Kadikoy neighbourhoods. Finally, repeat visitors to Istanbul or Turkey, in general, would do well to explore the Princes' Islands, namely Buyukada, the former home of exiled royalty. (Istanbul city guide.)

Cappadocia attracts couples and solo travellers, is Turkey's third most visited destination, and never fails to surprise with lunar-like landscapes and fairy chimneys shaped by thousands of years of wind erosion. During January, snow turns landscapes into a winter wonderland of Turkey. Cappadocia, a centre of early Christianity, features the Goreme Open Air Museum, a UNESCO World Heritage site and home to 14th and 15th-century cave churches with intricate Biblical frescoes. Living in caves was common in Cappadocia because locals carved their homes out of soft tufa rock left behind by ancient volcanic eruptions.

The other top recommended activity, an early morning hot air balloon trip, gives off bird's eye views and perfectly portrays why Cappadocia is a magical place in Turkey. Also, explore Derinkuyu underground city, a massive collection of rooms and passageways that protected locals from evasion in ancient times. Many touristic sites in Cappadocia are outdoors. Additionally, Cappadocia in Turkey's central Anatolian region sits at a higher altitude, inciting lower temperatures, so wrap up warm, especially at night. Book three nights and four days to see all major sites, and choose from various towns to stay, including Goreme, Uchisar, Urgup and Ortahisar. 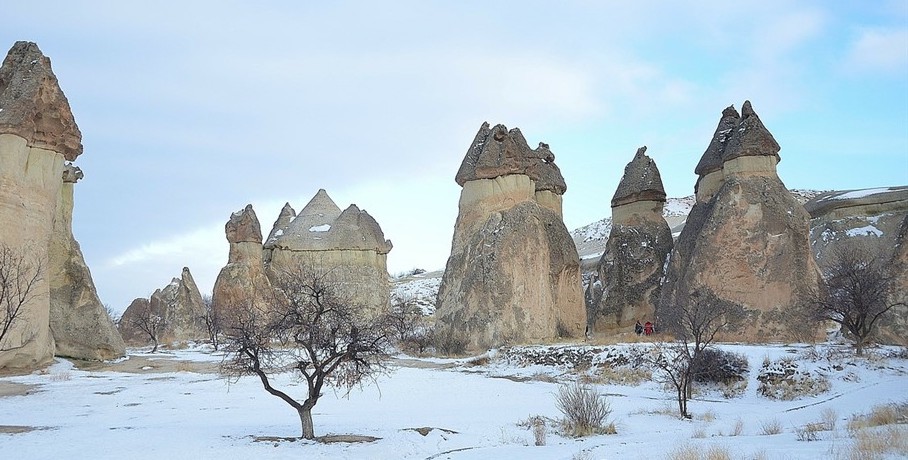 On Turkey's Mediterranean coast, Antalya is the second most popular destination. Boasting excellent shopping and nightlife scenes, stunning views, and a fascinating past, many ex-pats in Turkey, spend Christmas and New Year in Antalya because it is Turkey's warmest destination. Start your exploration at Kaleici old town, famously marked by Hadrian's gate entrance and home to narrow, cobbled paths with Ottoman houses and mosques. An excellent place to stay is Lara beach, home to many five-star all-inclusive hotels. Other top attractions within Antalya city centre include the archaeological museum, lower Duden waterfalls tumbling into the sea, and aquarium.

After exploring the city, hire a car or join guided tours to head out to districts like luxury Kalkan, quaint Kas, historical side, golfing Belek and delightful Alanya, with its red castle and city walls. Otherwise, main historical attractions include Phaselis and famous Aspendos featuring a marvellously preserved ancient theatre. January often features daytime temperatures of roughly 12 degrees, but night times temperatures drop. To combine beautiful weather with a touch of snow, head to Saklikent ski resort or Mount Tahtali with fantastic coastline views in the Kemer district. (Guide to the Antalya region.) 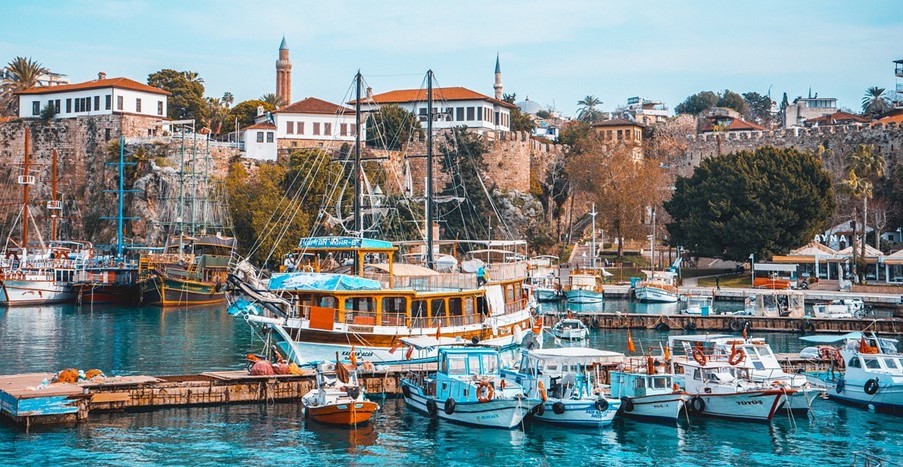 If you enjoy historical attractions, visit Ephesus in Aegean Turkey, because fewer crowds evoke an enhanced ambience in January. Annually hosting millions of visitors, Ephesus ancient city nearly rivalled Rome in terms of importance. However, as a former sea trading port, importance dwindled when the coastline edged away, and an earthquake caused citizens to desert it. These days, extensive excavations reveal how citizens lived through the Roman terraced houses, public latrines, agora marketplace, temples, and grand theatre. Ephesus sits in the Selcuk region of Aegean, Turkey. We recommend extending your stay overnight to take in other major attractions like the Virgin Mary's house, Saint John Basilica, and Sirince winemaking village. Also, see the Artemis Temple, one of the original Seven Wonders of the World. (What to see in Ephesus.) 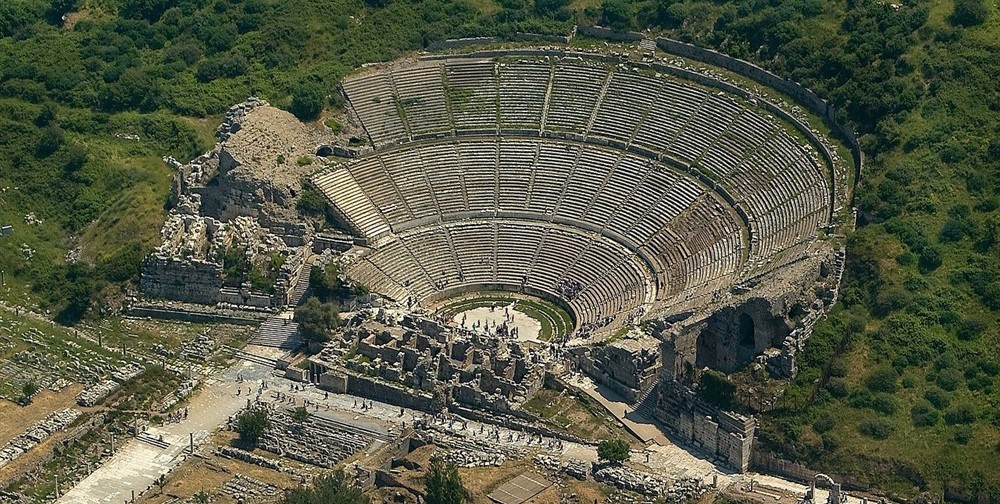 5: History and Skiing in Bursa

Bursa in Northern Turkey was the Ottoman empire's first ruling capital but stands out for four significant reasons. Firstly, the Iskender kebab was invented here. This delightful dish featuring kebab meat, pita bread, garlic butter and a tangy tomato sauce is a must-try on your visit. Second, the region's nickname, green Bursa, reflects many sites of natural beauty and green parks and gardens.

Then take a cable car up to Mount Uludag and indulge in one of Turkey's best skiing resorts. To stay overnight, hotel accommodation gives instant access to amazing views, and ski runs worth navigating. (Why is everyone talking about Bursa.)

6: Ride the Dogu Express of Turkey

Anyone interested in this journey through Turkey needs planning because tickets for this excursion sell out immediately. Popular with Turks, the Dogu express (Eastern Express,) a 24-hour train journey from Ankara to Kars, reveals stunning landscapes that made this journey an Instagram trend. After completing the trip, book a two-night stay in Kars centre to visit two off the beaten track destinations that are well-kept secrets.

The first Cildir lake freezes over in winter, and many Turks visit for a horse drive sleigh ride and dine on fish caught through the ice. Also, visit the UNESCO Ani ancient city. Dating from the Armenian kingdom, the nickname city of 1001 churches refer to unique architecture within the old city walls, and fewer visitors enhances a ghostly ambience. Additionally, the old district of Kars features early 20th-century architectural styles from when Russians ruled this part of Turkey.

Top Visited Places of Natural Beauty: Exploring beautiful places in Turkey reveals stunning landscapes; everyone should visit at least once. From rolling Kackar mountains plateaus to long sandy, Mediterranean beaches and everything in between, these places amaze anyone seeking more beauty. While hundreds of places in Turkey deserve a mention, we picked the favourites that have left us with beautiful memories and would return to them in a heartbeat.

Blog About Turkey: If you enjoyed this article about Turkey during January, read the rest of our blog that brims with helpful information. We have taken our teams' collective knowledge and experience of local and regional destinations to form a complete guide for anyone looking to travel or live here in Turkey.