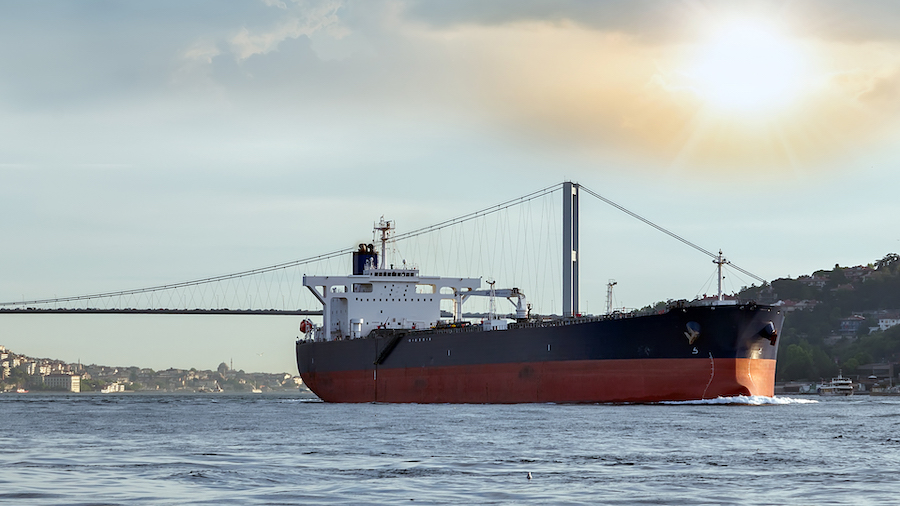 While the Russian-Ukrainian war has dominated the headlines over the last few weeks, few know about the aspects Turkey's role in the regional affair. Especially their role over the movement of each side’s vital supplies.

The Montreux Convention is an international agreement governing the use of the Dardanelles Strait, linking the Aegean and Marmara Seas, and the Bosphorus Strait, the body of water which links the Marmara Sea to the Black Sea. Historically, the Montreux Convention also settled European opinions over the handling of two straits under Turkish control over the course of a couple centuries. This came to be known as the “Strait Question.”

To be clear, these geographical bodies of water have been the subject of many international and European events dating all the way back to ancient times. But in the context of today’s current events, let’s take a look at what makes these areas so internationally coveted, how Turkey uses them to their benefit today, and how you can actually obtain a piece of Turkish property on their shores right now. 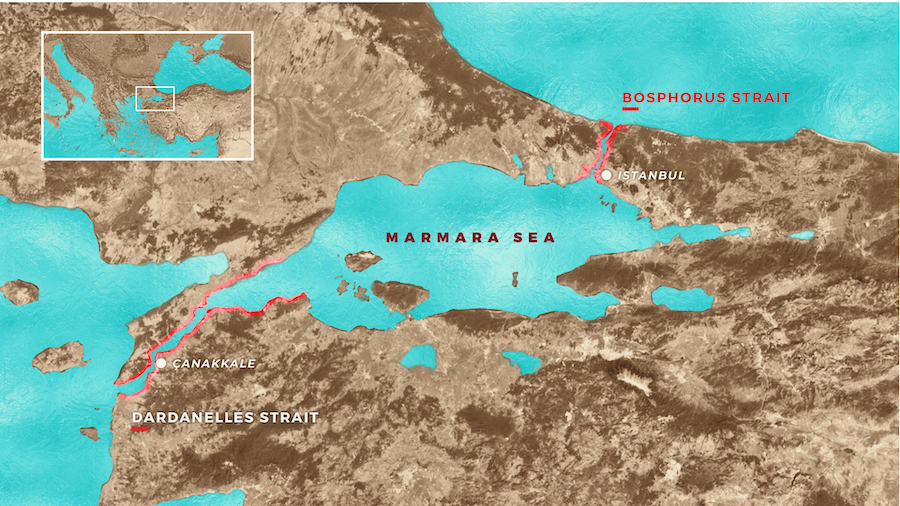 The Dardanelles Strait, Çanakkale Bogazi in Turkish, links the Sea of Marmara to the Aegean Sea over the course of 61 km. The ancient city of Dardanus, around Ancient Troy, gave the strait its name. Its route is lined with many medium to large size ports, including, Gallipoli, Eceabat, and Canakkale. Originally referred to as the Hellespont, it has also been the site of many historical battles between Persians and Greeks from the mythological time of Hero and Leander, to Xerxes and Alexander the Great, and into modernity.

"If the Earth were a single state, Istanbul would be its capital." Napoleon Bonaparte

The more famous of the two straits is unquestionably the Bosphorus. The 20 km long current cuts through the centre of Istanbul, dividing Europe from Asia, and bringing water from the Black Sea to the Sea of Marmara. It also brings water from the Sea of Marmara to the Black Sea, along with tons of fish and thousands of ships. It is the engine of economic activity for the entire city, region, and even the continent as a whole.

This is some of the most historically valuable and future-proof property on the planet and you can live here for a fraction of the cost when compared to it’s European, Asian, and American counterparts. It is a true anomaly on the world’s stage. You want a 160 m2 apartment next to the Duomo in the city centre of Florence? That will cost you €1 million. That same apartment with a view of the Eiffel Tower in Paris? €2 million. What about next to Gaudi’s La Sagrada Familia in Barcelona? At least €760,000. If you would prefer to walk out onto your terrace with a view of the Bosphorus it will only cost around €300,000 for a property in Istanbul.

Today, bridges and tunnels alike connect either side of the strait making it less of barrier between the East and West. It remains the only waterway from the Black Sea en route to the Mediterranean. Around 48,000 ships pass through this strait annually, three and four times denser than the Suez and Panama Canals, respectively. The Byzantine emperors and the Ottoman sultans constructed fortifications along its shores over the course of history. The two bookends are the castles of Anadoluhisari, which was constructed on the Asian shore by Bayezid I in 1390–91, and Rumelihisari, built directly across the strait by Mehmed II in 1452. They also built countless, wonderful palaces, and municipal buildings that ornament the shoreside from end to end. It has also been the inspiration of many, poets and artists across time, all together making it one of the preeminent crown jewels for all of Turkey. 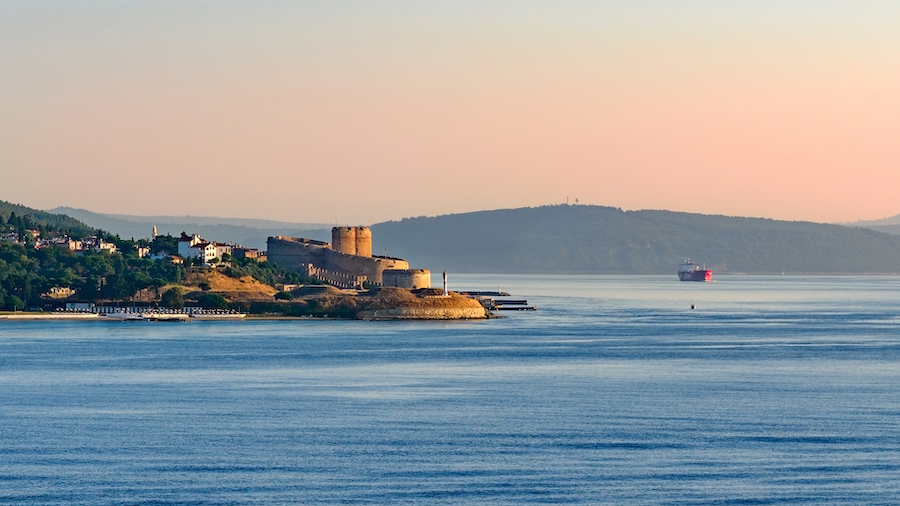 This now leads us to some of the jostling for influence and control of these natural wonders between nations. The Strait Question really begins with the rise of Russian control in the Black Sea region in the 18th century. The straits, at this point, were controlled by the Ottoman Turks, before the unification of the modern Turkish State. Russia’s main concern was attack from their south, i.e. naval fleets that enter the Black Sea through the straits. They weren’t able to achieve any official rule on the functionality of the straits until the Russians defeated the Turks via war which ended with the Treaty of Hunkar Iskelesi in 1833. This gave Russia influence over the closing of the straits to non-Black Sea powers.

In 1841 at what’s known as the London Straits Convention, Russia, the United Kingdom, France, Austria and Prussia, agreed to remove Russian influence over the straits. Restoring them exclusively to the “ancient rule” of the Ottoman Turks. However, with a British and French lean via their alliance with the Turks. This remained in effect for the duration of the Crimean War and World War I.

In 1923, the Treaty of Lausanne recognised the boundaries of the newly formed Turkey (successor to the Ottoman Empire). It also ratified a new set of rules over the straits. Under the terms of the peace agreement, Turkey's straits were declared open to international traffic, including trade and warships. This wasn't ideal for Turkey, Russia, or other Black Sea countries. In 1936 the Lausanne groups met again, this time in Montreux, to reconfigure the terms, especially concerning Turkey’s ability to control the militarisation of the waters.

The resulting agreement between the diplomats resulted in Turkey reestablishing their full right to permit free access to merchant ships. But also, their right to restrict access and/or fortify the straits in times of war. And these are the provisions that regulate the traffic of the straits to this day. These provisions govern the mode of entry, duration of stay, and tonnage, as well as the nature of weapons they can carry on board.

Although the agreement generally favours Black Sea states (Russia, Ukraine, Romania, Bulgaria, and Georgia) over others in terms of transit of warships through the straits, certain restrictions apply regardless of that status. The convention’s implementation was never perfect, but the fact that, so far, there has been no attempt to revise it and the international community has continued to abide by its terms speak volumes. Turkey has close relations with both Ukraine and Russia diplomatically, but also economically and beyond. Turkey imports 78% of its grain from both countries and opens its doors to each countries citizens, with both combining to make up almost a third of all arrivals in 2021.

In many ways there is no other country in the world more equipped to diplomatically tie the East to the West and NATO to the Black Sea to the Middle East. The geography of Turkey dictates their complex role on the global stage. But it’s a role they’ve always handled with grace and it’s part of what makes Turkey such a unique place full of history, culture, and alluring beauty.