Property Turkey Blog Excellent Attractions of Fethiye that Everyone Should See

Excellent Attractions of Fethiye that Everyone Should See

Fethiye, in southern Turkey, is the perfect example of a laid back seaside lifestyle. The backing Taurus mountain range and the calm, blue waters of the Mediterranean not only attract thousands of holidaymakers every year but also expats seeking to live out their days with copious amounts of sun, sea and sand.

Away from the beaches, however, the attractions of Fethiye are equally as stunning. From the historical buildings to the natural landmarks of beauty, most are ideal for families, kids and even solo travellers. Most are also incredibly easy to get to, either by using public transport or booking up for guided tours.

The Ghost Village of Kayakoy

Every country has their abandoned towns or villages where time appears to have stood still, and in Turkey, the eeriest is Kayakoy, just on the outskirts of Fethiye city centre. Visible remains of houses, churches and schools scattered over the green hillsides unwillingly portray one of the saddest urban declines in Turkish history.

Go back nearly one hundred years, and Kayakoy was a thriving village with both Greek and Turkish citizens. The forced population relocation clauses of the Treaty of Lausanne, changed this though as Greeks returned to their homeland and vice versa. Returning Turks were not farmers and unable to make a living.

Slowly over time, locals left for pastures new, until eventually, a small earthquake prompted the remaining citizens to flee. These days, although a few hotels, a mosque and restaurants on the outskirts, are signs of life, the main village centre keeps its ghost like trance.

The wooden rooftops, window frames and doors of houses have rotted away, leaving only the shells. Walking along the cobbled paths evokes a feeling of pity since it is easy to imagine the community spirit that once held the village together. The interior architecture of the old church is a must-see. Otherwise, a pleasant way to end your ghost like journey through Kayakoy is in one of the nearby traditional restaurants.

The Stunning Scenery of Butterfly Valley

At the turn of the century, Butterfly Valley was one of Turkey’s well-kept secrets. However naturally as tourism in the region grew, so did the number of visitors. Daily boat trips leaving from Fethiye harbour dock into the bay of Butterfly Valley or the more independent traveller can catch the water taxi running back and forth many times a day.

If you want to avoid the crowds from the boat trips, visit in the afternoon when they have pulled up anchor to sail elsewhere. Otherwise, head deep into the valley for a gentle hike in among amazing scenery. The name Butterfly Valley is slightly misleading because you are only likely to see butterflies during the breeding season, but another favourite activity to do there is snorkelling, simply because the water is so clear.

If you really want to soak up the vibes of roughing it rustic style, also camp out overnight. Be aware though, because ad-hoc electricity supplies mean you really will be getting back in touch with Mother Nature. 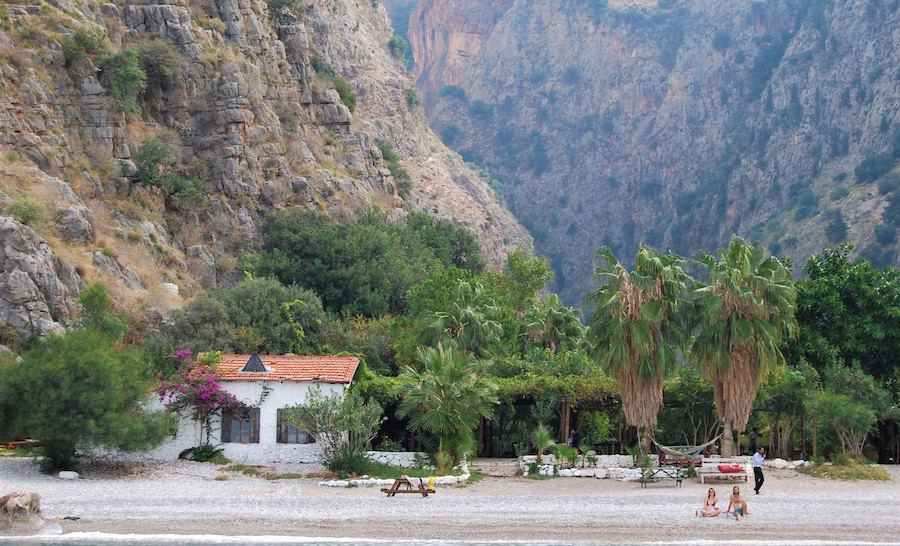 Oludeniz and the Blue Lagoon

Since the water taxi to Butterfly Valley leaves from Oludeniz, this is an ideal opportunity to discover the Blue Lagoon, one of the most photographed beaches in Turkey. Do not assume the landscape is the same Blue Lagoon as seen in the famous film. However it is still stunning and until mainstream tourism hit Turkey was a favourite backpacker hangout, with night-time BBQS. These days, the lagoon and Oludeniz beach are protected areas by law, and once you see them for yourself, you will understand why. 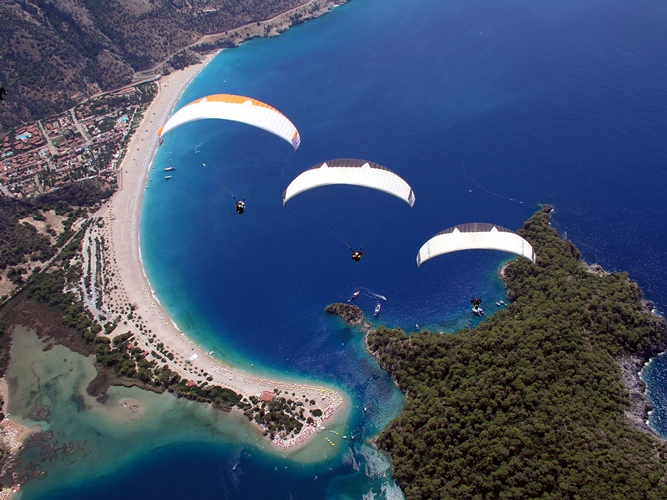 The Lycian rock tombs of Fethiye

Upon visiting Fethiye town centre for the first time, you might assume that the elaborate facades carved into the massive rock face overlooking it, are temples. They are in fact Lycian rock tombs of which the Amynthas is the most famous.

The Lycians were an ancient civilisation who ruled throughout the area, and they buried their dead in high up places so the creature arriving to take them to the afterlife could reach them quickly. Lycian rock tombs are a focal feature all over the southern coast of Turkey, but the ones in Fethiye are particularly worth visiting, because, at the same time, you will see a spectacular landscape view of Fethiye and the Mediterranean. 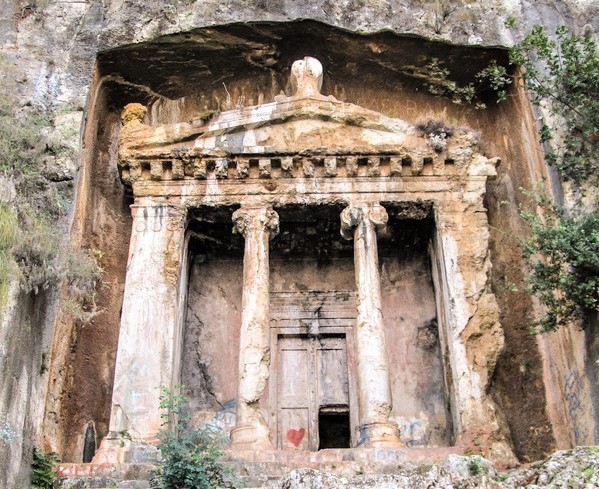 Sitting off the coast of Fethiye, Gemiler island might be small, but it has many reasons to visit it. The first is the 4th to 6th centuries church ruins. The second reason is the most amazing sunset view over the horizon of the Mediterranean Sea. Lastly, as a favourite anchor point for overnight boats sailing the Turkish Riviera, it is a cool place to hang out.

Sitting at night on deck, enjoying a sumptuous feast cooked on board with ice cold beer and a cool evening breeze really is a memory of Turkey that even surpasses the best. If you really want to indulge in the atmosphere, instead of sleeping in your cabin, sleep on deck and wake up in the morning with a fresh cup of coffee and fantastic views. 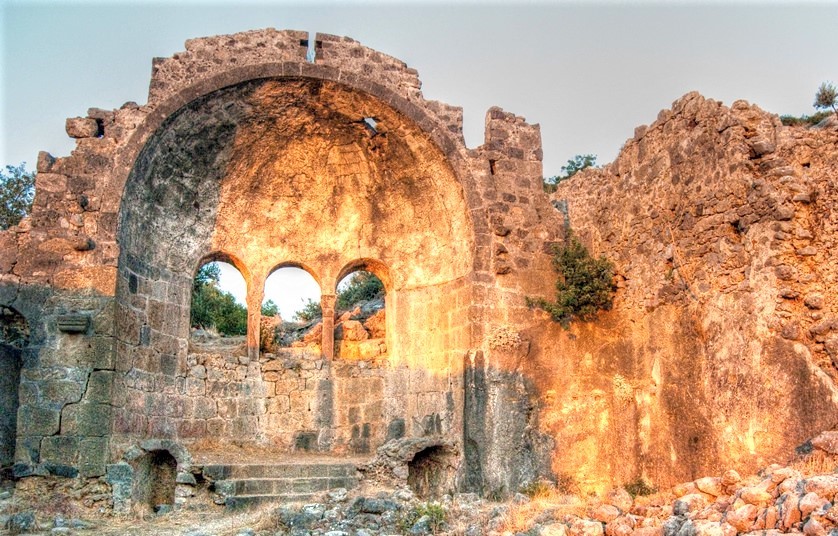 Fethiye Museum: Delving into the History of the Region

Even if you are not a history buff, a stroll around Fethiye museum introduces you to its historical past. For many centuries, the name of Fethiye was Telmessos, and through careful excavations, historians and arachnologists have uncovered a gem of historical artefacts portraying life in the area in days gone by. Also including objects from other nearby cities such as Xanthos, the small museum takes 30 minutes to explore. (The museum is open every day apart from Monday.)

Pasputar: The Old Town of Fethiye

Lastly, if all that exploring has worn you out, relax in the old part of Fethiye town centre. This is where it all began, many years ago, before mainstream tourism came to Fethiye. Cobbled streets making up a huge maze of bars, restaurants and shops make it the perfect place to buy souvenirs, practise your bargaining skills or enjoy a delicious lunch or live music at night. Pasputar is one of the top recommend attractions of Fethiye that everyone should visit.