News from around Turkey: Ancient tombs cleared after media controversy 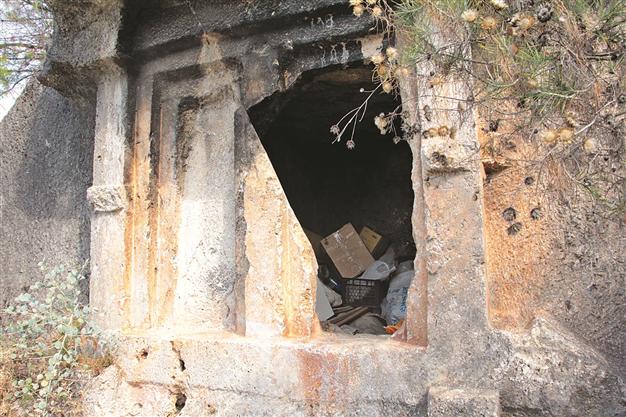 Fethiye’s ancient tombs have been cleared of rubbish and debris after news of the mess hit the news.

The Lycian tombs, which date back to the 4th century BC, were cleared by Fethiye Museum officials after news outlets revealed the ancient site was being used as storage space by locals.

The Amintas tombs are relics of the Lycian site of Telmessos. Today, they’re a symbol of Fethiye, the town over which they stand permanent watch.

Despite their historical importance, a number of the 1.5 metre by 2m tombs were being used as storage space for a number of items including plastic bottles to boxes.

A local tourist guide old the Hurriyet Daily News that the state of the tombs damaged the image of the tourist town.

“I tour the town with tourists on certain days of the week,” the guide explained. “Examining the historical artifacts in the region, European tourists sometimes say Turks do not respect history and protect it,”

“These areas are centers of attraction in Fethiye, so the protection of these tombs is very important.”

The airing of a number of pictures showing the tombs strewn with debris and rubbish stirred up local debate, and prompted action from various municipal departments.

Fethiye Museum officials have removed almost a ton of debris from the tombs. Plans are on track for measures to prevent a repeat of the rubbish build up.

Gladiator tombs to be displayed in ancient city

Twelve gladiator tombs will be displayed for visitors in the ancient city of Stratonicea, in Mugla.

Stratonicea is known as “the city of gladiators” - an apt home for the 1800-year-old tombs.

The professor who led the excavations said the ancient city still needed much excavation.

"The ancient city is famous for its gladiators. We already know the names of 12 gladiators. Their tombs were excavated in previous years. The funerary steles are currently on display at Muğla Museum," he said.

The archaeologist said the project will promote tourism in the area, especially as excavation is expected to uncover more and more artifacts.

A sunken island off Istanbul's Bosphorus coast is garnering attention after six divers took photographs of the forgotten attraction.

Just 700 metres from the Maltepe shore, Vordonisi Island sunk beneath the waters in the year 1010, after a large earthquake. Now, 1000 years later, it’s hoped the island will become a draw for divers.

The team of divers explored the sunken island - said to have disappeared beneath the waves complete with a monastery and priests - with a view to discover more about the island’s archaeological and geographical features.

The research team said scientific research is needed to examine the condition of the rocks to gather seismic information and reveal the island’s fascinating history.

The team added that it wasn’t possible to see the monastery due to the “sea creatures” living on the island.

The island is the 10th of the Princes Islands, the most well known of which is Buyukada.

The spot where almost 100 people were killed last Saturday in the Ankara bombing is to be renamed Democracy Square.

No one has claimed responsibility for the two suicide bombs, which struck as people protested for peace last weekend.

A number of EU countries are backing an action plan with Turkey, which hopes to ease the numbers of refugees travelling to Europe.

Almost 600,000 refugees have reached the EU by sea this year, and the majority of them have travelled from Turkey.

However, Turkey’s foreign minister Feridun Sinirlioglu says the deal is still in its draft stages. The minister said the EU’s proposed financial measures were unacceptable. Turkey has asked for €3 billion in aid. German Chancellor Angela Merkel said the sum was being considered.

Talks will continue over the next few days, and Merkel is due to visit Turkey.

"There is still a huge amount to do," Merkel said. "But you cannot say that we've achieved nothing."

"Our goal is to achieve trade of $100 billion, and it is attainable, because our economies are complementary, and a lot can be done. And, of course, projects such as the Akkuyu nuclear power plant or Turkish Stream should be engines of development of our trade and economic relations,” Meshkov said on Thursday.

A 2010 agreement between Moscow and Ankaara kickstarted the construction of a nuclear power plant in Mersin, the country’s first. The power plant, expected to be completed by 2023, is part of Turkey’s continuing interest in self generating its own energy needs, and will allow the country to reduce its power generation and energy costs.

The other major project for the two countries is the Turkish Stream pipeline, which will deliver Russian gas to Turkey by way of the Black Sea. The pipeline will have a capacity of 63 billion cubic metres of gas annually. Around 16bcm of this will be used by Turkey and the remaining gas will be kept in a hub on the Turkey-Greek border and transported to Europe.

The construction of the pipeline was scheduled for June, but it’s been delayed as the parties have not yet reached an agreement.