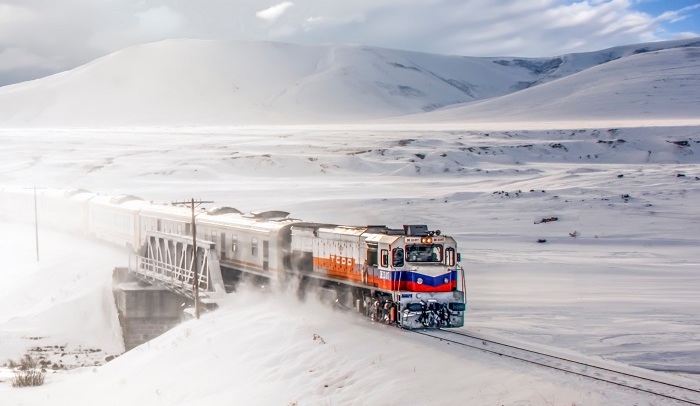 Mehmet Nuri Ersoy, the Turkish Culture and Tourism Minister has announced that a new train is set to be introduced to accommodate the increasing number of tourists wanting to visit Eastern Turkey, easing the load of increasing demand on the current Eastern Express.

The Eastern Express currently leaves from Ankara and travels towards the eastern city of Kars in Turkey. After travelling on the train, the Minister told reporters how need for an extra train showed the potential for Turkey’s tourism market and then went on to confirm that he had been in talks with the Transport Minister Cahit Turhan to create an alternative service that will travel along the same route.

Why is a new Eastern Express train needed?

One of the main reasons a new train is needed is a recent surge of travellers due to the stunning views the journey offers – many tourists choosing to share the views from the train on social media networks. The aim of the Eastern Express has always been to provide a safe way for people to travel with minimal delays to snow-covered areas in the east of Turkey. Ersoy believes that the new train could also be instrumental in making the east an international destination for future tourists.

With a new train travelling the same route, more people who currently cannot travel because they are unable to purchase tickets due to tickets often selling out, will now be able to travel and take in the beauty of the region. The new train will also encourage visitors to the area with the minister saying: “Train services provide serious tourism potential, and a new train will utilise this potential and bridge any transport gap.”

Official data supplied by State Railways showed that in the first few months of last year the Eastern Express carried 14,165 passengers to Kars from Ankara. Currently, as soon as tickets for the train are available, the seats are immediately snapped up and even with additional wagons supplied, trains still cannot meet the demand of tourists.

Who are the passengers using the Eastern Express?

Prior to the increasing popularity of the train service, the average age of passengers was 50 and over. However, students are now the biggest group of travellers using the Eastern Express and this has led to young travellers sharing their experiences via social media and the train itself becoming a trendy places to socialise as well as the best way to enjoy new adventures and experiences in Turkey without breaking the bank.

Videographers and photographers are also amongst the most frequent passengers on the Eastern Express. Statistics suggest that they choose the train because of the stunning landscape and views, particularly during winter with January and February being the best months to capture the true beauty of the winter wonderland surroundings. Future passengers are expected to be international tourists with many already starting to make the journey.

Where does the Eastern Express train go?

Once the train leaves the Turkish capital Ankara, there is a quick stop in the cities of Kirikkale, Kayseri, Sivas, and Erzincan before finally arriving in Kars. When passengers leave the train in Kars they can stretch their legs or take a sleigh ride on the Cilder frozen lake.

It was not long ago that it was considered as madness to embark on a 24-hour train journey of over 850 miles rather than taking a one-hour flight, even though the train fare was a fraction of the cost of a plane journey. Yet with the development of train travel standards and comfort, an additional train is now needed to cope with the demands of travellers looking to enjoy the stunning views of the Eastern Express in Turkey.