Property Turkey Blog Why Everyone Should Visit Sirince Village

Why Everyone Should Visit Sirince Village

High up in the green hills of Selcuk, in Aegean Turkey sits a small, unobtrusive village with roughly 600 locals. Hidden away from sight, the only way to reach it is via a long, winding road snaking its way up Ephesus Mountain. Yet every week hundreds of foreign and Turkish day-trippers ascend the mountain, having heard about the many good reasons to visit Sirince, one of a few villages in Turkey that are still thriving.

1: It is a Doomsday Haven

In 2012 when the Mayan apocalypse predictions spread over the Internet, New Age spiritualists said Sirince, close to the supposed place of assumption for the Virgin Mary would escape the doomed future. Citing positive earth energy as the reason, approximately 60,000 people descended on the village with high hopes of living another day. Booking into the few hotels, to hold silent vigils, locals businesses were astounded with the sudden interest. Of course, we now know, the Mayans got it wrong, or someone misinterpreted their text, and the disastrous event is yet to happen. Either way, bemused locals enjoy the divine status given to it by the New-Age movement. 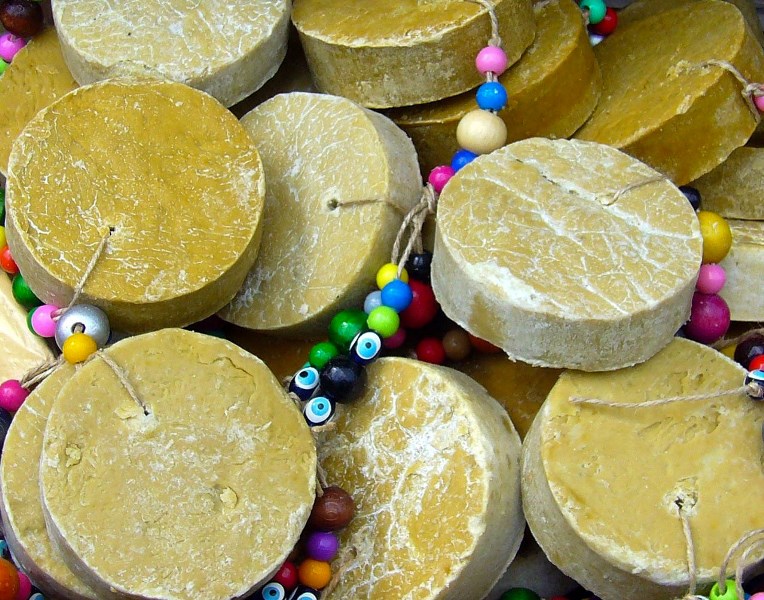 2: A Nostalgic Ambience Through Architecture

Urban legends say freed slaves from the nearby ancient city of Ephesus founded Sirince, formerly called Cirkince, meaning ugly. While nothing remains of their presence, the village is a beautiful open-air museum reflecting life before the Turkish War of Independence in 1923. During that era, many Turks and Greeks lived side by side in villages all over the country. The result is a mixture of cultural heritage, evident in the unique architecture of some houses. While most houses in Sirince have the typical 19th-century Ottoman style of red-tiled roofs and whitewashed walls, a few older buildings still display Greek characteristics of wooden balconies and window shutters. Sometimes standing at three storeys high, they are instantly recognisable as distinctive landmarks of the cobbled streets. 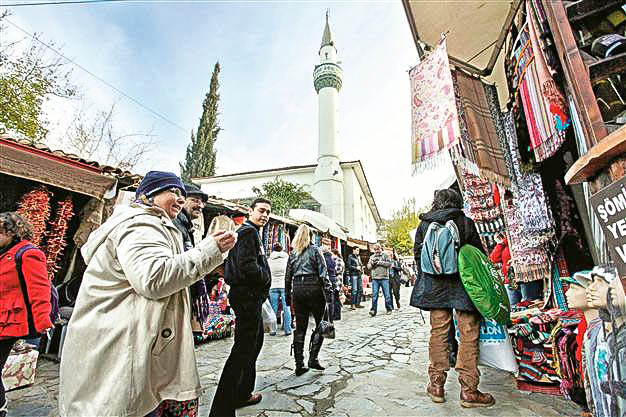 Also harking back to the Greek / Turkish connection, Sirince has two churches, but Saint Johns, the Baptist at the southern end of the village, takes all the admiration. After many years of neglect, this small but stunning church fell into disrepair, but in 2015, the Turkish Ministry of Culture and Tourism put out restoration work for tender. You might question why when the locals are Muslims, but the region is extremely famous for faith tourism and pilgrims flock to see nearby Ephesus, one of the Seven Churches of Revelation mentioned in the New Testament of the Bible. In the courtyard of Saint John’s church, a small fountain holding a statue of the Virgin Mary is an iconic symbol of its Christian heritage and visitors often toss in coins while making a wish. Inside the church, a domed roof and supporting columns perfectly portray its purpose as a place of worship. 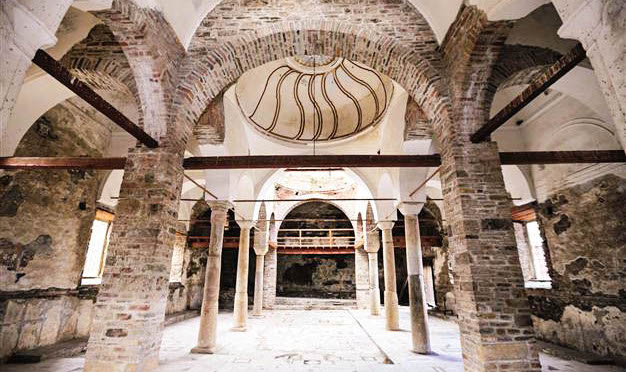 Although most visitors to Sirince go for the day, a few hotels attract independent travellers looking for an authentic Turkish experience away from typical holiday resorts. These restored hotels focused on original décor and design, therefore perfectly reflecting the cultural heritage of Sirince. Nisanyan Hotel is a shining example. Spread over numerous buildings, the restored houses and cottages give customers the feeling of a home from home in a traditional village of Turkey. Tall stonewalls, large roaring fireplaces and wooden verandas all lend to an interior décor theme based on authenticity. Sirince Eveleri is another quirky hotel filled to the brim with antique pieces from around Turkey.

Despite the popularity with foreign visitors, Sirince has held tight onto their cultural influences including good old-fashioned Traditional Turkish food. Around the village, restaurants serve good Turkish food at affordable prices. Artemis Restaurant is the most famous and oldest. Every day, large coaches of tourists pull up for a sumptuous buffet lunch. We recommend trying mezes (appetisers) including hummus, eggplant salad, sautéed vegetables, olives, and crusty bread. Anyone who is feeling slightly peckish should also try Menemen, a brunch dish made from tomatoes, peppers, onions, and eggs. 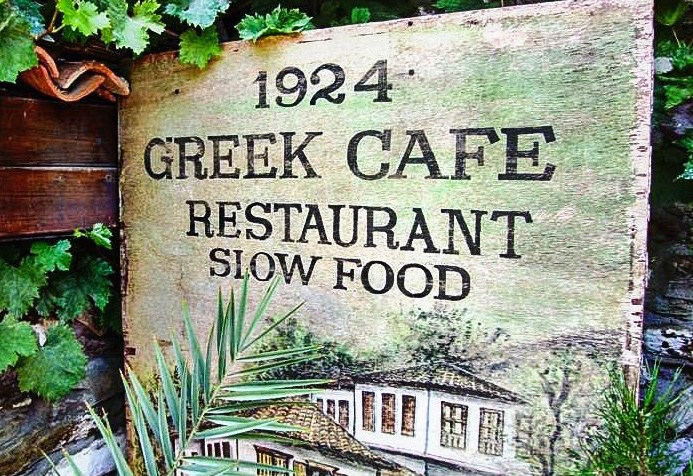 6: A Shopping Bazaar and Locally Made Souvenirs

It is quite impossible to come away from Sirince without buying souvenirs. Naturally being far away, from major shopping centres, for centuries, locals have made their own goods and now sell them to tourists. Olive oil soap, cotton tablecloths, homemade jams; pickled vegetables are to name but a few of items for sale. The central bazaar is the best place for variety because a large choice is for sale. Also indulge in homemade Turkish ice cream and fresh juice, taken from fruit grown in the nearby orchards. 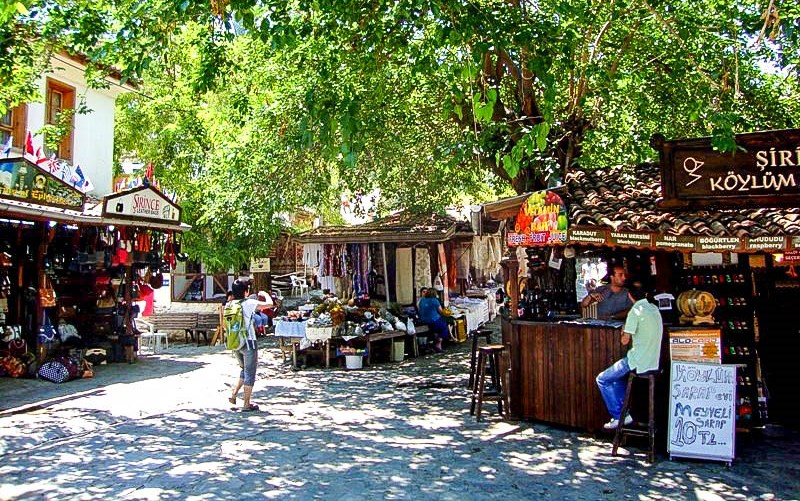 Due to its elevated position, landscape views from Sirince views are worthy of gracing the pages of any major travel magazine. Running into the distance and disappearing on the horizon, they include orchards and land farmed by inherently self-sufficient locals. Hikers and trekkers often hire local guide knowledgeable in flora and fauna of the area to guide them a day trek. Alternatively, in certain months, at the entrance to the village, locals also sell horse rides as another method of exploring. 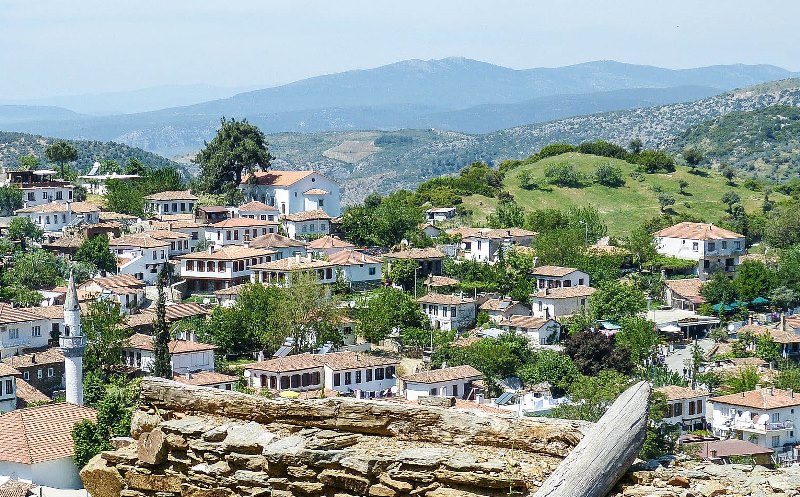 Sirince is world famous for its homemade wines, produced since the 18th century. Rather than just using grapes, they garner unusual flavours from fruit grown in the surrounding orchards. The result is an incredible array of flavours to sample in a wine tasting session, available at most shops. Pomegranate, blueberry, apple, strawberry, raspberry, and plum are a few examples. Some people say the wine is heavily concentrated, so they dilute it with lemonade, but as they would say in Turkey, enjoy your drink! 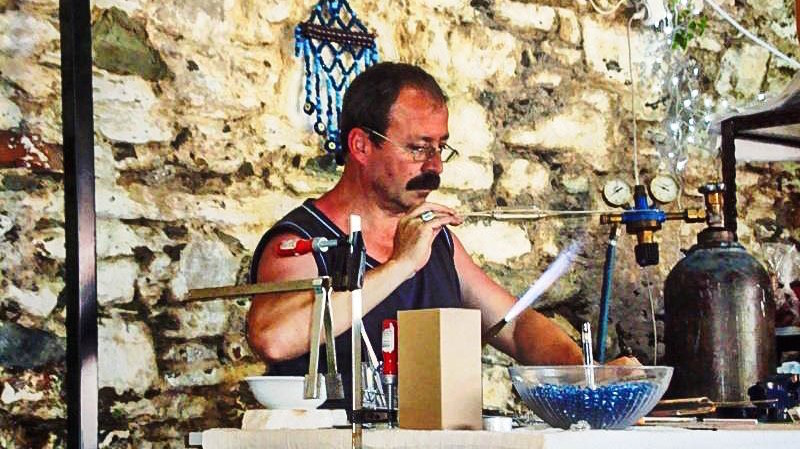 Note: How to Get to Sirince

Local buses do not run to the village so many people opt for a private or groups guided tour from the nearby towns of Kusadasi and Selcuk. Alternatively, hire a car and follow road signs to spend the day leisurely at your own pace. Car parking facilities are available at the entrance to the village.