From the Bosphorus Strait, where ferries compete for space with freighters and fishing boats, to the sheltered harbour of the Golden Horn, Istanbul is a city of sea views. No matter where you visit around the city you’re faced with glittering expanses of water and all the accompanying romance of the sea: the salty smell, the crying seagulls and the balik ekmek vendors. 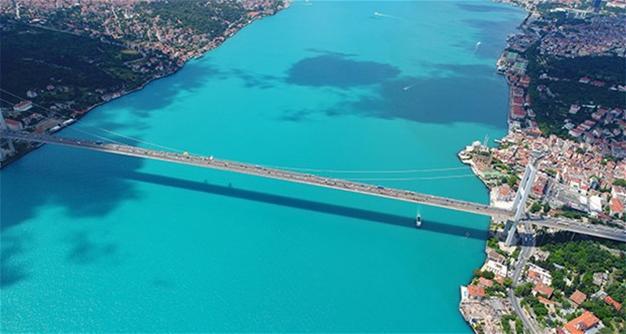 In a city where the sea is a such a focus, it’s natural that Istanbul sea view homes are so highly sought after by investors and lifestyle buyers. Below, we’ve listed our favourite areas by the sea, or developments which enjoy views of the shoreline, so you too, can live a seaside life in Turkey’s largest city.

Since the 1970s, atmospheric Cihangir has long been the favourite haunt of artists, writers and philosophers. Its narrow, cobbled streets filled with quaint cafes, galleries and food and clothes boutiques brings to mind a bohemian Parisian neighbourhood, making it the ideal place to while away an afternoon.

Its colourful buildings and narrow streets have started to attract tourists, and the once hidden gem is currently undergoing a resurgence in popularity.

Expats and locals alike love the colourful buildings and pedestrianised streets, which set Cihangir apart from other central Istanbul suburbs. The Cihangir Mosque, a wooden structure commissioned by Suleiman the Magnificient, has one of the best views of the Bosphorus - as do some of the new developments that have sprung up in this delightful area.

$718,000
2
2
Istanbul
Zeytinburnu, on the Marmara Sea on Istanbul’s European side, is a traditionally working class neighbourhood which was once the home of the city’s leather works. The days of heavy industry are over for Zeytinburnu, and the leather manufacturing has moved to Tuzla.

As with many former industrial areas around the city, warehouses are making way for new developments as regeneration transforms the area. The seafront is smartening up, with cafes opening along the promenade, making this Istanbul seaside district one of the city’s most promising for investment, and a sought-after location for families seeking a home by the sea with easy access to central Istanbul.

Infrastructure in and around Zeytinburnu has improved immeasurably, and transport links now make it possible for commuters to travel all around the city, increasing the area's popularity and pushing property prices up.

We’ve written at length about stylish Bomonti’s success story. With its closest neighbour being Nisantasi, and located just three kilometres from Taksim Square, this forgotten corner of Sisli was always headed for greatness. The former centre for beer brewing in Istanbul has transformed from a rundown industrial area to an uber modern, chic neighbourhood where fortunes were made for investors who got in early in the game.

Bomonti’s location mean a number of its properties enjoy stunning views over the Bosphorus and the Golden Horn. While the eye-watering gains of the early days are now over, since Bomonti is still priced below its wealthier neighbours there are still opportunities in this central area for investors seeking sea view apartments in Istanbul for lifestyle and investment.

$537,000
3
2
Istanbul
Buyukcekmece was once the seaside location of choice for day-tripping city dwellers. Today, it’s a waterfront location in its own right. With excellent connections to the central city and around Istanbul, Buyukcekmece is a sought-after location for lifestyle buyers - especially commuting professionals with families - and investors.

Regeneration has given rise to a number of modern developments with the kind of lifestyle facilities that attract Istanbul families seeking green space and fresh air outside the central city.

This Istanbul seafront property development is an ideal investment or lifestyle property. Its modern facilities allow residents the luxury of never having to leave the development, although a short walk takes you to Buyukcekmece town centre, a historic and very appealing area with cafes, tea gardens, green spaces for picnics and lovely restaurants. And of course, the appeal of waking up each day to the sound of the waves lapping the Marmara shore is endless.

$2,900,000
5
4
Istanbul
Once shunned by investors in favour of Istanbul’s European side, Kadikoy has finally come into its own. Kadikoy, on the Anatolian side of the Bosphorus, is undergoing a resurgence. Its streets are full of prosperous, stylish young people who visit the area’s lively cafes, galleries, bars, shops and restaurants.

Its historical sites and cultural institutions are thronged with tourists, and investing in its property is on almost every investor’s to-do list. It’s partly down to the gentrification spreading through the city, and partly because of the new financial centre. The Atasehir Financial Centre is due to headquarter some of the region’s largest banks and financial institutions, a multi-billion dollar development which will attract billions more in investment and wealth for the area and the wider city.

This development in one of the area’s most elite neighbourhoods not only has the sought-after Istanbul sea view properties, it’s just a short walk to the iconic Bagdat Avenue and the historic Fenerbahce district.

$1,079,000
2
2
Istanbul
Developed in the 50s and 60s to become one of the city’s first satellite suburbs, Atakoy has become a prosperous, middle class neighbourhood with an upmarket city marina. No longer considered a far-off suburb, Atakoy is well connected to the central city, as well as having its own malls, cultural centres, a conservatory and other leisure facilities. It has a number of green zones and quiet residential streets, and these attributes mean it has become a desirable rental location for professionals seeking Istanbul seafront property as an alternative to the busy central city.

These luxury hotel apartments overlook the Sea of Marmara, enjoying not only a prime location but a slew of lifestyle facilities such as a gym, swimming pools, boutique shops, a mall and other sought-after perks. Upmarket hotel-style apartments make excellent rental options for wealthy professionals.

Located in the historical setting of Cihangir just minutes away from Taksim and Istiklal Avenue, these luxury apartments have fantastic sea views and are ideal for both investors and lifestyle buyers looking in the central heart of the city.