From the Aegean to the east, notable areas of Turkey everyone should know about are plentiful. Before we start, though, here are a few facts for anyone interested in learning. The seven regions of Turkey break down into 81 provinces. Some like the Mediterranean boast of golden beaches and a warm climate. In contrast, the black-sea focuses more on tradition and in some places, promoting landscapes of natural beauty like the Kackar mountain range.

The central Anatolian plains enjoy their own weather climate but each region differs vastly. For example, in June, when people sunbath on the southern coast, locals in the north wrap up warm against the cold. Thinking about the coastline, Turkey’s geography is interesting because the black, Marmara, Mediterranean and Aegean seas, all surround it. Wow, no wonder it is one of the world’s top beach holiday destinations. All these unique facts present themselves as good reasons to take a trip to Turkey, but let us look at where you should go and why. 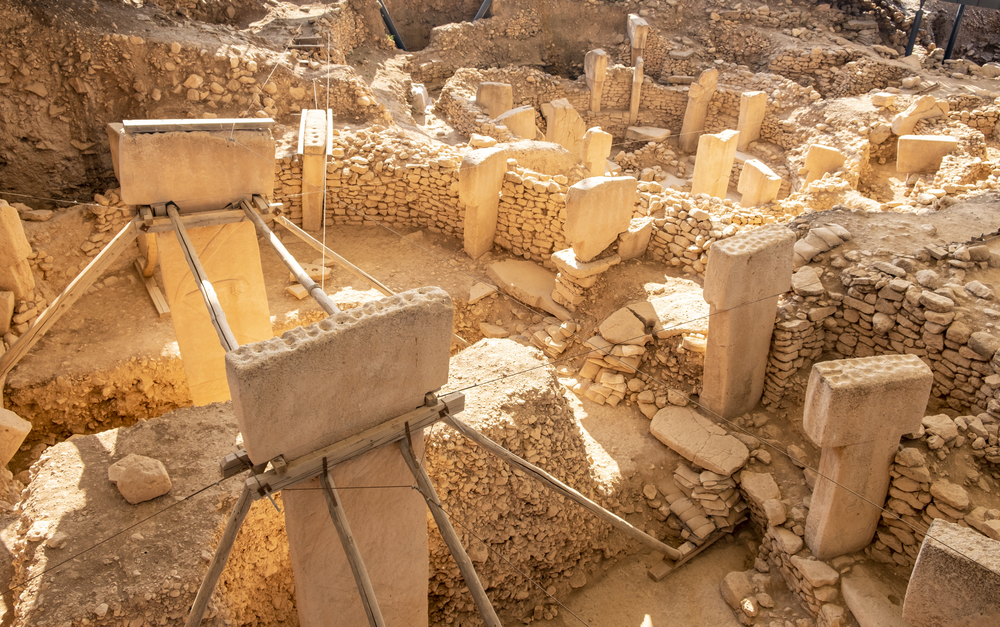 Areas of Turkey to Visit

Home to Turkey’s third-largest city, and many smaller towns, Aegean Izmir always led western trends. Formerly known as Smyrna, sights to see in the city centre include the old clock tower, Kemeralti bazaar, asansor, the agora and Kadifekale castle. We love exploring the city, but much prefer the smaller towns like Cesme and Alacati. The latter became famous thanks to whitewash old stone green cottages with blue shutters and doors. Known for upmarket vibes, this favourite summer destination for Turkish people has much to offer. Additionally, fronting the Aegean-sea and on the outskirts of the Izmir province, Ephesus, near Kusadasi, should be on everyone’s list. This old ruined city underwent extensive excavations to uncover and restore landmark buildings like the Celsius library, roman terraced houses, and grand theatre. (9 excellent reasons to buy property in Izmir.

Beautiful valleys, hot-air balloon trips, cave churches and underground cities make up the mystical Cappadocia region on the Anatolian plateau. The first stop for all travellers should be the UNESCO World Heritage Site of Goreme Open-Air Museum. This impressive collection of ancient churches features interior frescoes depicting scenes from the Bible. There are many other places of interest include Ihlara valley and Derinkuyu underground city, but just touring around the villages makes for exciting exploration. Uchisar is upmarket travel with its boutique hotels, while Ortahisar maintains a more traditional Turkish feel. Places like Mustafapasa reflect Cappadocia’s Greek orthodox history. 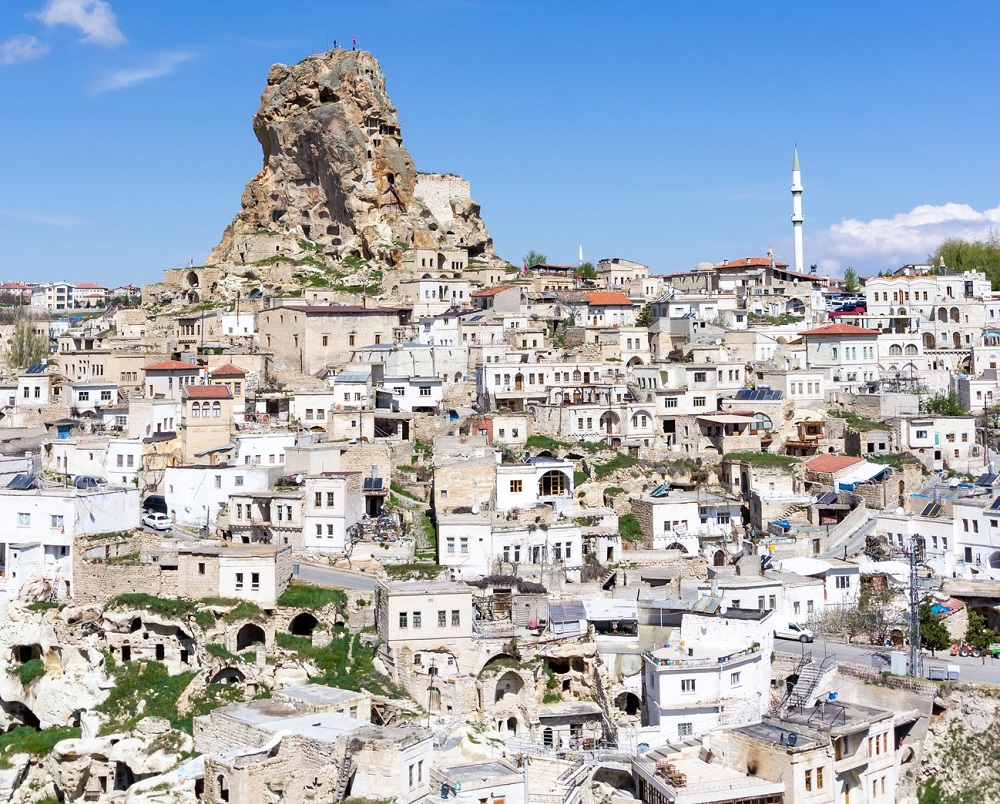 If ever there was an area that stood out for unique culture, traditions, history, and cuisine, the south-eastern cities of Gaziantep, old Mardin and Sanliurfa stand up to the podium. Sitting next to the Mesopotamian plains, where scholars say civilisation began, think a delicate blend of Turkish,  Kurdish and Arabic influences. In Gaziantep, the castle stands out as the prominent landmark but do taste its culinary delights of baklava and pistachio nuts. Old Mardin is all about the architectural styles of the old houses. Sanliurfa, a conservative city, is home to Balikligol, where the Quran says Nimrud threw Abraham into the fire.

Surrounded by the sea of Marmara, the Bosphorus strait and the Golden Horn, Istanbul is Turkey’s beating heart. Sitting on two continents, everything happens here, including the most successful tourism, health, business, economy, and education industries. Formerly known as Constantinople, for travellers, the destination to head to is Sultanahmet old city, the former ruling capital for both the Ottoman and Byzantine empires. Must see landmark buildings include the Blue Mosque, Hagia Sophia and the sprawling complex of Topkapi Palace, from where the Ottoman sultans first ruled from. Also put the Grand Bazaar a short walk away on your list. This large shopping bazaar totals nearly 3000 vendors so expect to get lost as part of the fun. 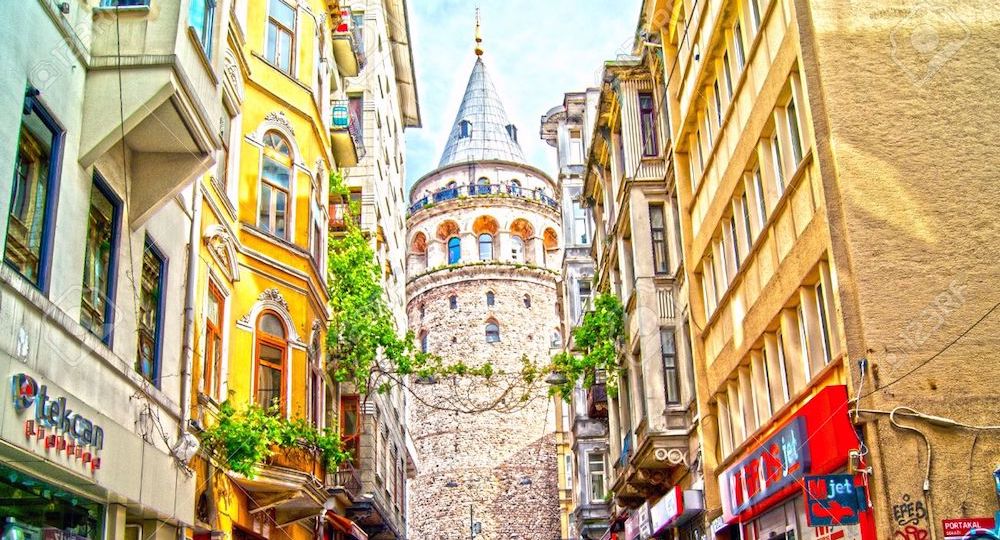 Sitting in southern Turkey, the Antalya region is the second most popular destination for tourist stats. Not only can it boast of the Mediterranean coast’s best shopping and nightlife scenes, but is home to many of Turkey’s best beaches like Lara, Konyaalti, Cleopatras and Kaputas. As a significant Turkish riviera sailing hub, known as the Turquoise coast, yachting is big business. No wonder people love spending summers here, but its warm climate means many people from around Turkey, head there at Christmas and New Year. Places to see include the city centre, golfing resort of Belek, bustling Alanya, and historical Side. 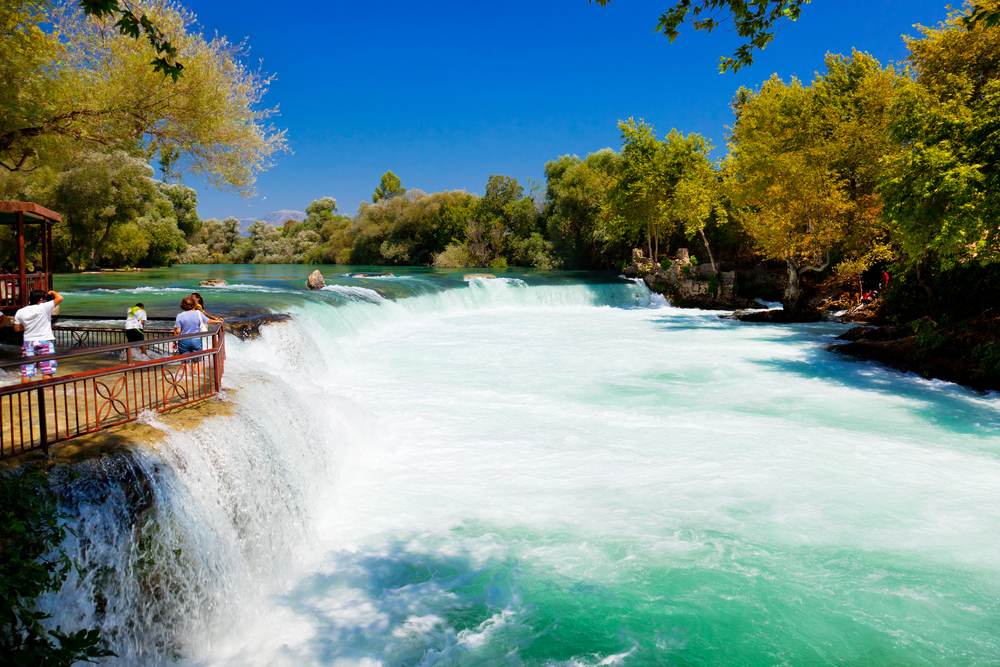 Belonging to the Aegean region, the Bodrum peninsula presents a more cosmopolitan ambience and one that encourages non-conformity for any foreigner. For decades, celebrities, wealthy business executives and royalty from around the world flocked here and still do. As a significant sailing hub, expect to see large, millionaire mega yachts docked in around the sea coast. The peninsula does an excellent job of accommodating those with cash, but budget travellers will find many opportunities to save money. We recommend a week-long road trip to visit highlighted resorts including upmarket Yalikavak, rustic Gumusluk, stylish Turkbuku, basic Gumbet and of course the old town centre, home to Bodrum castle, the peninsulas major landmark. 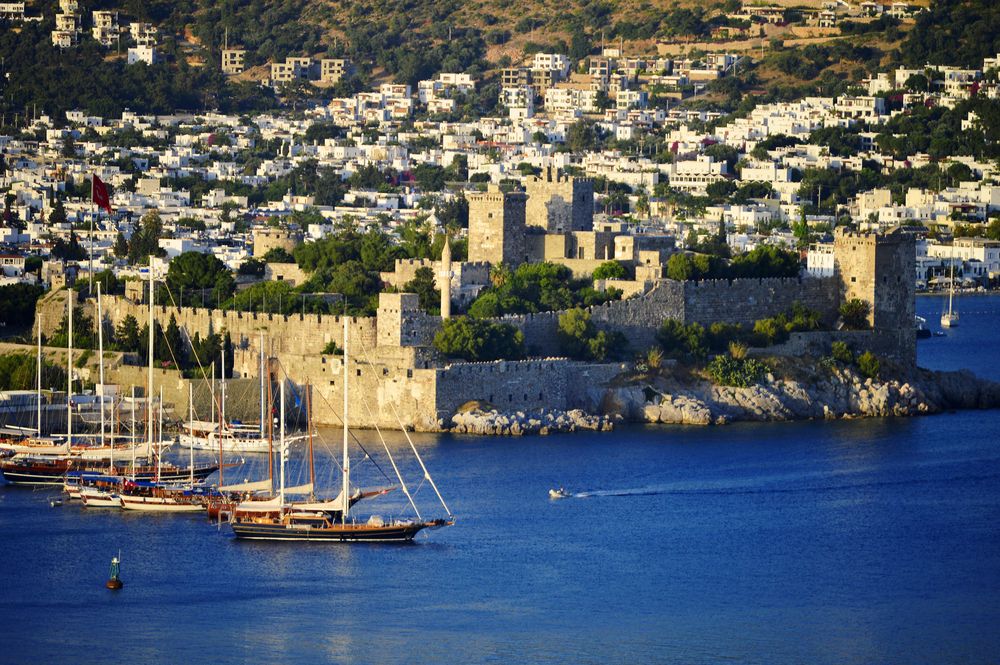 7: Pamukkale in the Denizli Area

Sitting inland and known as the cotton castle, Pamukkale is a must-see destination when you visit Turkey. Solidified water high in calcium trickles down the hillside to form pools displaying Mother Nature’s power. Sitting next door, to the archaeological ruins of Hierapolis ancient city, collectively, both make up a UNESCO World Heritage Site. While visiting, drop into the museum, displaying preserved sculptures found during excavation. If history is your thing, take a slight detour to the Nazili province and drop by the ancient cities of Aphrodisias and Laodicea. In ancient times, the latter was one of seven churches of Revelation, as mentioned in the Bible’s New Testament. Read ten things to do in Pamukkale. 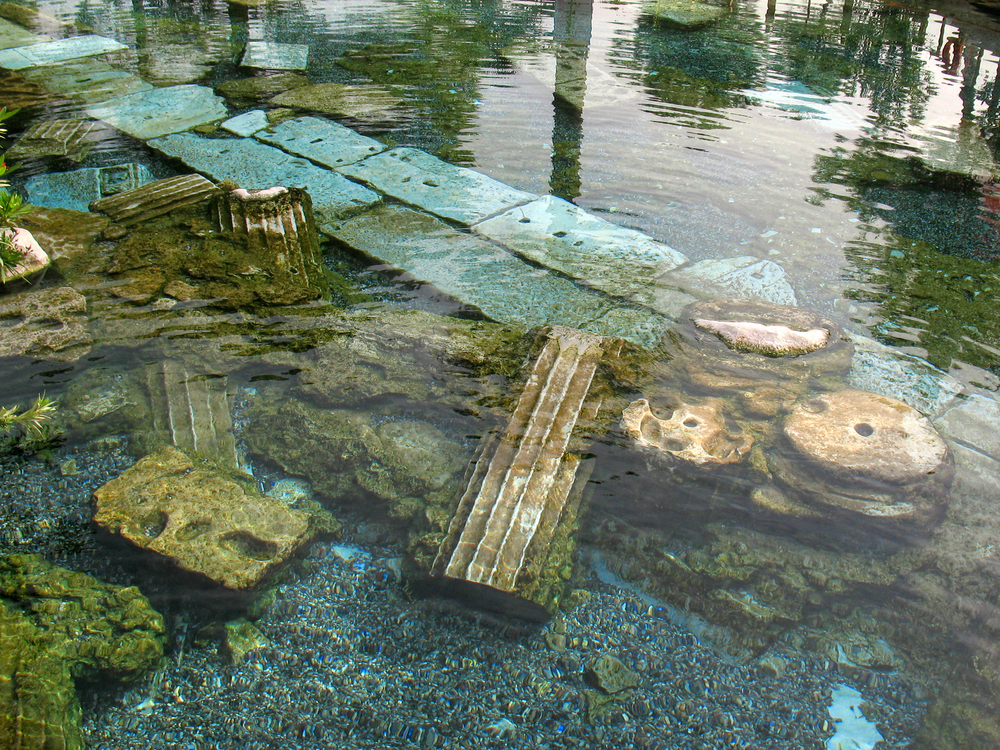 Trabzon does a marvellous job of highlighting traditional Turkish vibes along with stunning places of natural beauty. Turkish cuisine here is a must-try since the regional dishes using local ingredients are unique. Sitting nearby Rize, the tea-producing capital of the Republic of Turkey, you could ideally combine a road trip of the two destinations. From Trabzon, many places of stunning beauty await you. They include Ayder Plateau and Uzungol. These mountainous resorts host a lot of Middle-Eastern tourists, although, in later years, word spread among the western travel crowds. Both Rize and Trabzon are conservative Turkish cities, and this shines through for Middle-eastern nationalities to buy a property. 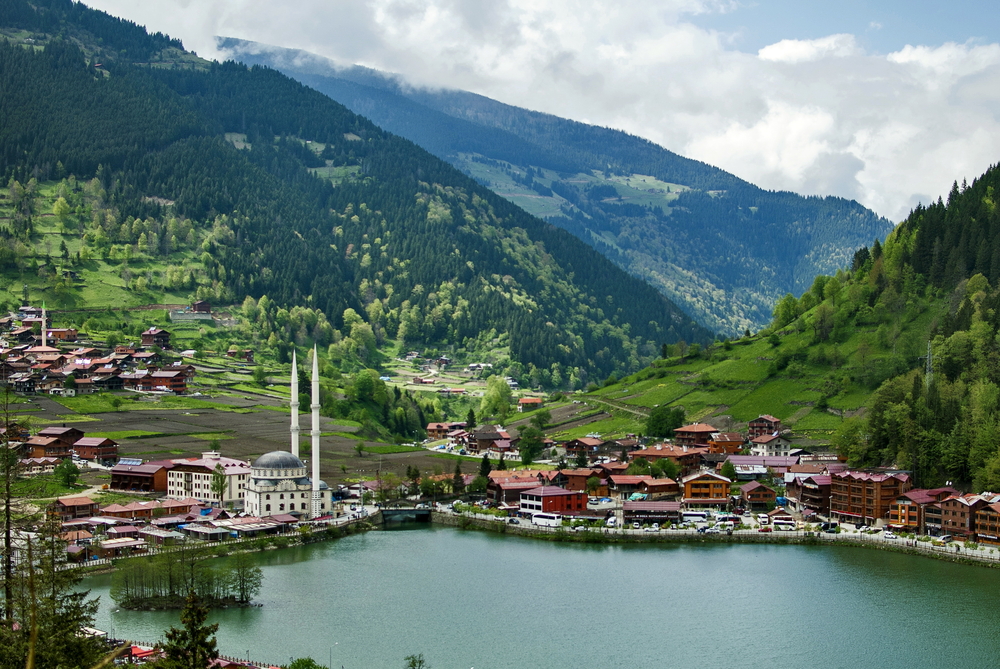 Reasons to Travel to Turkey: From places of natural beauty to the history, culture and traditions, Turkey offers bountiful surprises for anyone who visits. Proof of its popularity is seen in tourist numbers and the many foreigners who have bought a second home here. Anyone who is interested in travel but has not yet jumped on a plane will be tempted to come after they’ve read this article.

About Us: We are Property Turkey, an investment agent with offices all over the country. If you are interested in buying property here and would like to know more about areas of Turkey that stand out, call us today or read more in our Turkey blog.