Property Turkey Blog Is it Safe to Live in Turkey?

Is it Safe to Live in Turkey?

On the odd occasion, customers sometimes ask if it is safe to live in Turkey? This is quite understandable given that holidaying in a country and living in it, are two different experiences. People also ask for several reasons. Some want to know about crime rates and how safe it is for single females. Some wonder about the border region that Turkey shares with Syria while others cite terrorism that is a worldwide concern.

Before we answer all these questions, it is worth looking at the stats of how many foreigners live in Turkey. There is no exact count because foreigners aren’t ticked off as being absent when they visit their home or other countries. However, to gain a brief understanding, we can look at official residency applications. 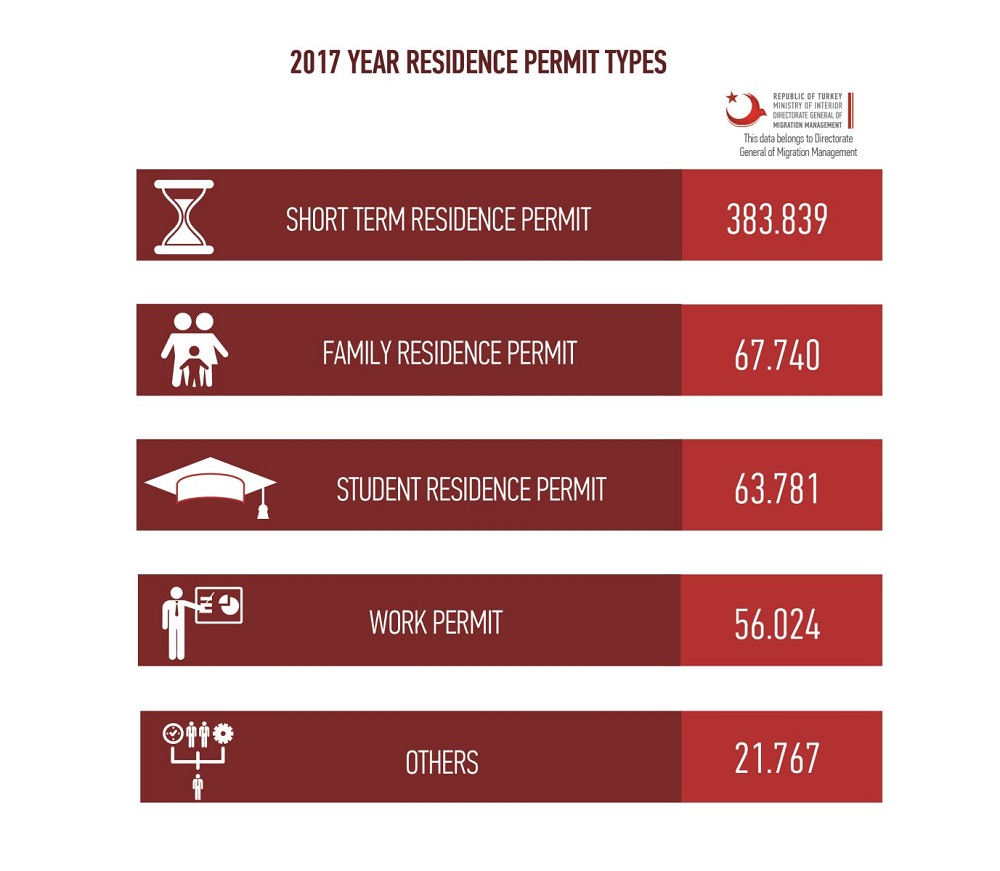 If someone wants to stay for more than 90 days out of a 180-day period, they need a Turkish residency permit. Most expats living on their pensions or high-interest savings account will apply for short-term residency permits but other reasons also include work and study.

To find out how many foreigners had applied for residency permits, we looked at the official Ministry of Interior Directorate General of Migration Management for the Turkish Republic. They are quite useful because they publish records regularly and we can see that every year, the number of foreigners applying for residency permits are rising. 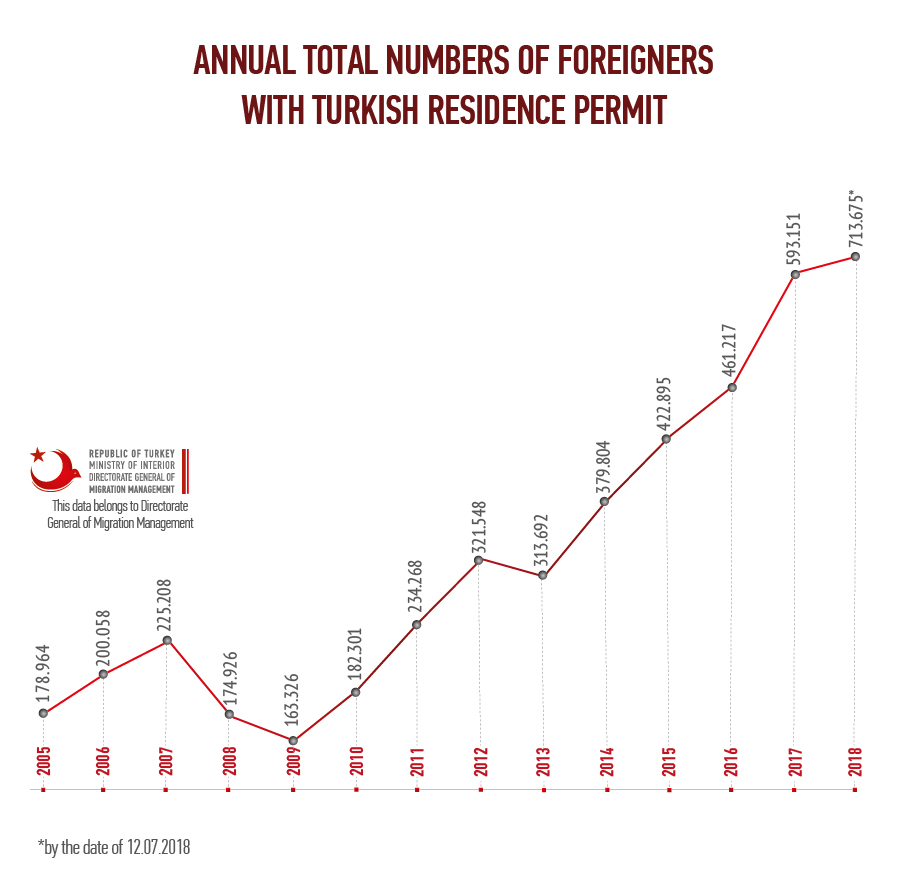 They also give further stats as to which regions are issuing the most residency permits. It is no surprise that Istanbul, Turkey’s most significant and busiest city racked up the most amount of applications.

The Antalya region rocked in at second place, and this isn’t a surprise either because it has always been a favourite destination for foreigners relocating to the country. Many of them have bought homes in resorts like Belek, Side, Alanya, Kemer, Kas, Kalkan and lastly not forgetting the city centre. 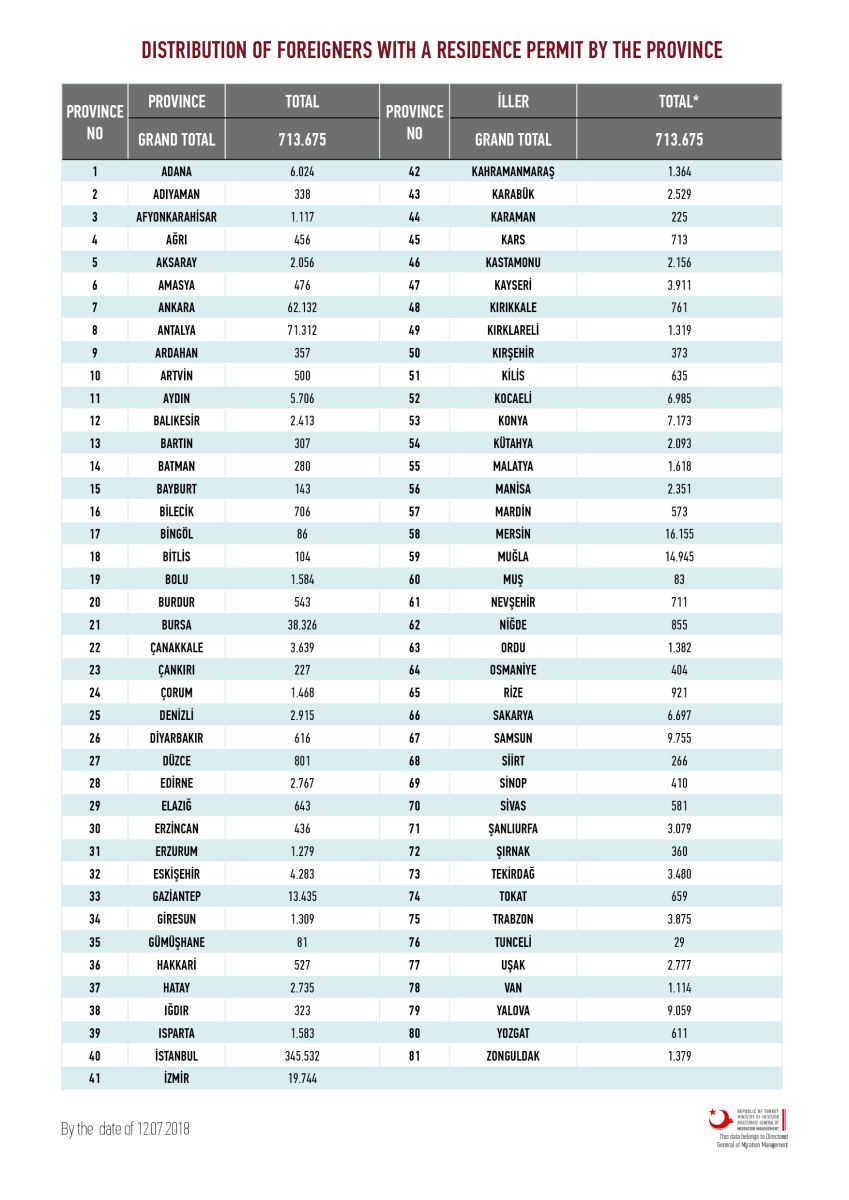 Nationalities applying for residency vary including Iraqis, of which a significant amount conduct business in the country. Azerbaijanis normally come for educational and study purposes, while Russians have always had a strong presence in Turkey, especially in the above-mentioned Antalya region, of which they are the top visiting nationality for tourism purposes. Brits normally gravitate towards the Aegean coast, while other nationalities including Germans, East Europeans and many more live in many other districts and towns across the country.

So, Is It Safe to Live in Turkey?

While the stats prove that Turkey is gaining popularity with foreigners, let’s discuss the topics that often crop up and concern people who are unfamiliar with the country.

Syria: Many misunderstand the situation in Syria. Although the two countries share a border, Turkey is the 37th largest country in the world; hence distances between places like Istanbul to the Syrian border are more than 1,000 kilometres. This is further than the distance from London to Paris, both of which are in two different countries. The situation in Syria doesn’t affect a majority of Turkey hence why when you look at all the major holiday, and flight companies like TUI, Thomas Cook, EasyJet and Jet2, they are all pushing Turkey as the must-visit summer destination.

Terrorism: Turkey also went through a period of terrorist attacks, and this affected the tourism and foreign real estate business during 2015 and 2016 specifically. However, thanks to an intense government crackdown on terrorists, there hasn’t been an attack since New Year’s Eve of 2017. Turks merely go around their business as usual, and in 2018, tourism has returned to Turkey tenfold, thanks to the safe environment that it offers.

Crime and Safety: According to the website Nation Master that brings together statistical information, Turkey has a lower crime rate than America. Naturally, nowhere is exempt from crime, so still, take precautions as you would do in your home country, but when we speak to foreigners living in the country, many of them remark on how much safer they feel.

So, our roundup of stats and facts should satisfy anyone asking if it is safe to live in Turkey, but the best answer is to experience it for yourself. After all, seeing is believing. If you plan to buy property, please contact us or look at our viewing trips on which we can show you daily life in many different destinations. Alternatively, see our blog section to find more information on living and working within Turkey. We think you will particularly like our interviews with expats who already live here.