Property Turkey Blog From fasting to feasting: Ramadan in Turkey

From fasting to feasting: Ramadan in Turkey

The Islamic holy month of Ramadan is a time of celebration, fasting and prayer, and forms one of the five pillars of Islam. The holy month, which ends this year on July 4, sees many of the world’s 1.6 billion Muslims commit to the daytime fast - which can last as long as 17 hours in parts of the world with long daylight hours.

For the observant, the sunrise-to-sunset fast involves nothing passing the lips at all, including food, drink and even tobacco smoke.

Ramadan is about looking inward at the individual, as well as outward at your immediate society. This means Ramadan is not just abstaining from food or drink. People examine their lives, scrutinising their behaviour and making resolutions - such as reading the Quran or visiting the mosque daily. Others concentrate on bad habits, giving up television, music or social media for the duration. 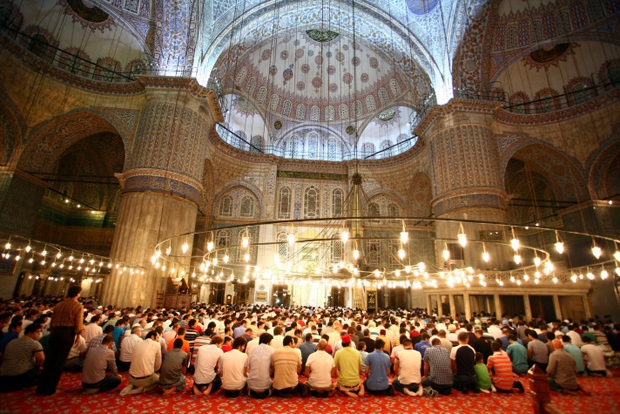 Most Ramadan observers go about their day-to-day lives - work, school etc - but you’ll notice the city is quieter during the day. Restaurants aren’t as busy and shopkeepers won’t offer you that customary cup of Turkish cay (tea).

It’s considered polite to refrain from eating and drinking in front of others during daylight hours. Instead, head inside to a restaurant or cafe. Although the staff might well be fasting themselves, they will be happy to serve you.

You’ll notice some establishments cover their windows, so those fasting aren’t distracted by the sight of diners. 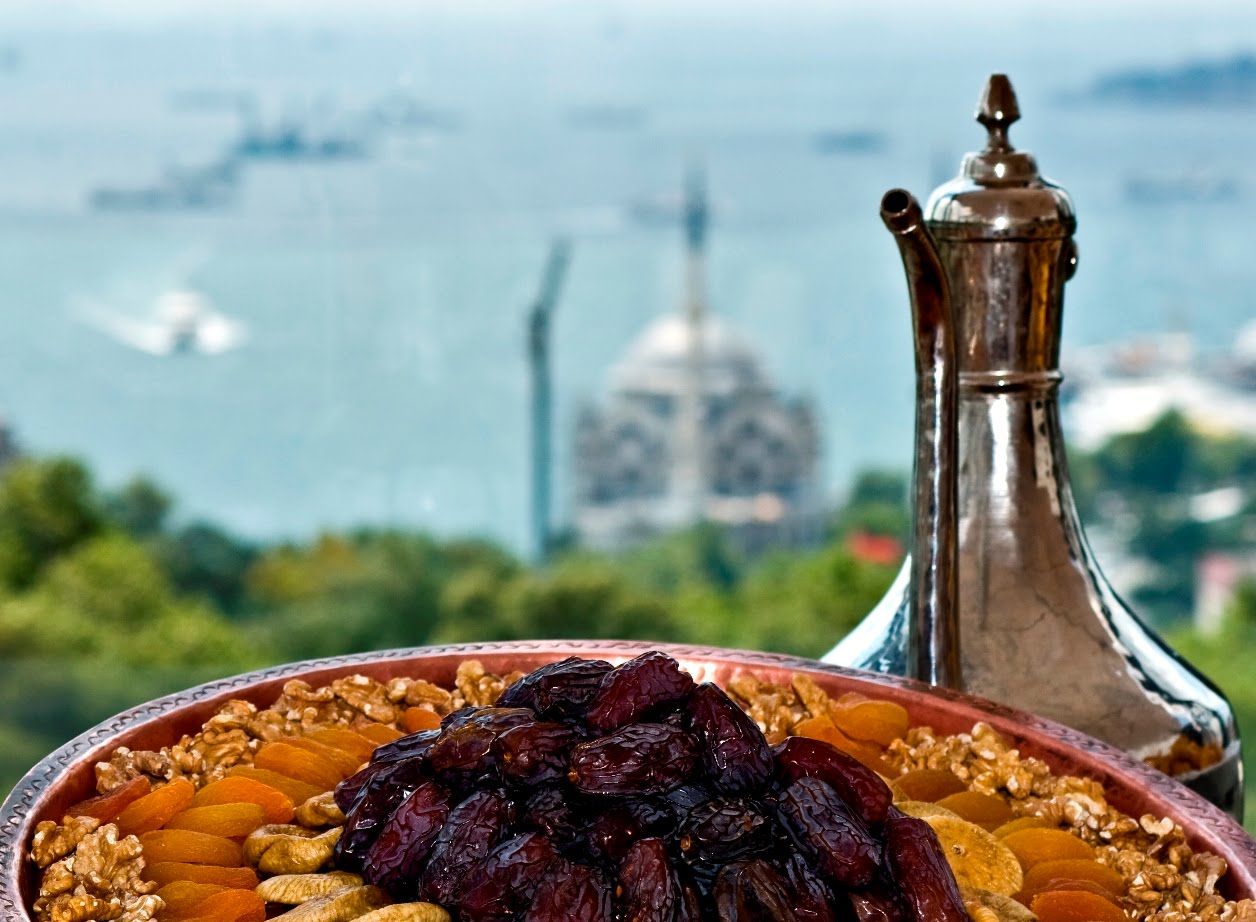 When the sun goes down, the streets will become busy again as people eagerly break their fasts with the light meal known as iftar. In Turkey, this generally includes pide, the fresh Turkish flatbread and - as with most meals - soup, as well as pickled vegetables and olives, all food that is easy to prepare. Dates are also a popular iftar food. Eating dates goes way back to the mists of the dawn of Ramadan: the Prophet Mohammed recommends consuming the dried fruits for their health benefits.

Later in the evening everyone enjoys a more elaborate meal and flocks into the streets to attend mosque amid a rather festive atmosphere, highlighted with colourful lights and banners and pop-up shops selling snacks, religious items and toys for the kids - it’s an altogether party atmosphere.

A number of restaurants offer incredible Ramadan menus at this time of year, both budget and more luxurious. Tables are often filled with sherbets, samovars with Turkish tea, and appetisers to break the fast.

In Ali Baba, one of Istanbul’s most historic restaurants, the staff work overtime during Ramadan. Every night the restaurant caters to more than 800 people - that’s 24,000 diners over the month-long period, turning it into a Ramadan institution.

Staff at the historic Suleymaniye restaurant, which opened in 1939, work hard to get meals out in a timely fashion - despite the fact they too, are fasting. 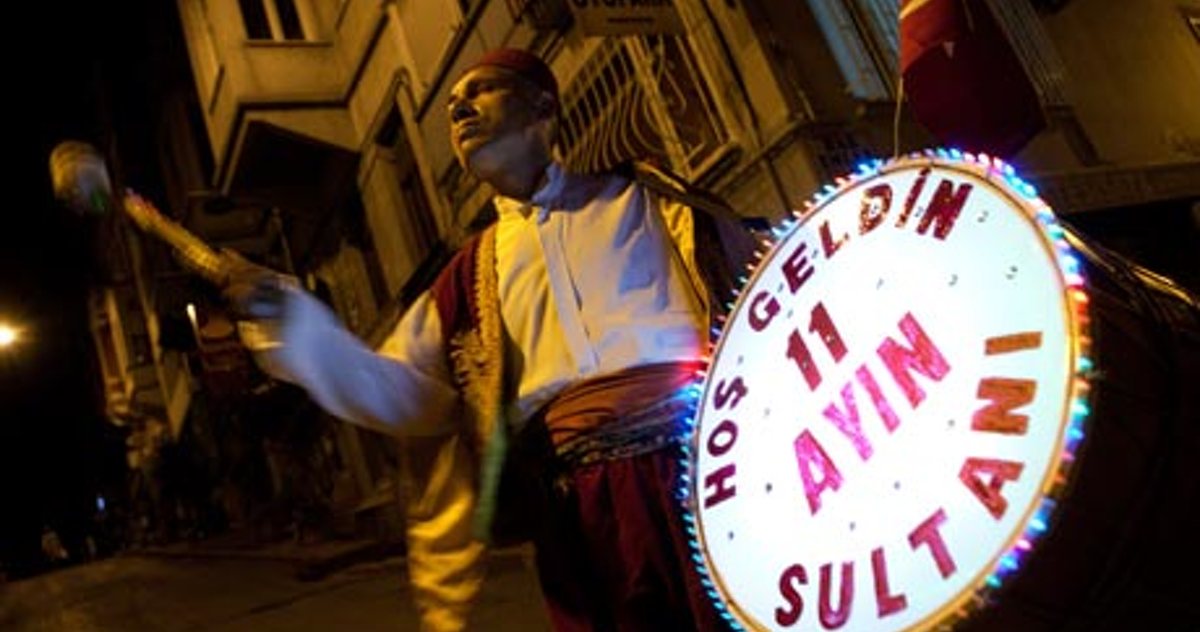 After midnight, usually between 230am to 330am, drummers walk the streets of cities, towns and villages. The sound of traditional drumming wakes everyone in preparation for sahur, the large early-morning meal that is eaten before sunrise to sustain fasting people throughout the day.

Often dressed in traditional Ottoman garb, the drummers are often descended from families who have been drumming for generations. In Istanbul, around 2000 drummers roam the city’s neighbourhoods, drumming rhythmically and chanting folkloric poetry, earning them tips from residents.

Not everyone loves the drummers, who have had complaints from new mothers, the elderly and the sick. But to most - especially to the drummers who walk the pre-dawn streets - the drums are an important part of Ramadan, and one that must be kept alive. 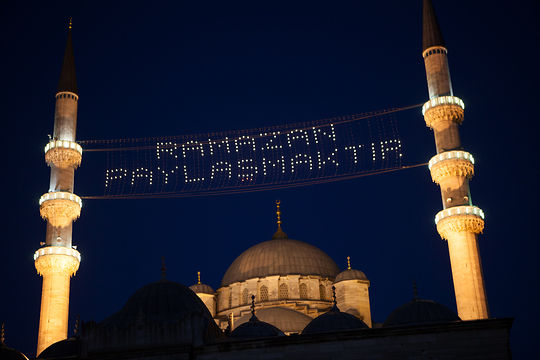 Turkey's mosques become crowded during the holy month as people visit to pray before and after iftar. The religious centres are decorated with mahya, illuminated messages placed between minarets. The lights feature messages like “Ramazan Berekettir” (Ramadan is bountiful) or “Hosgeldin Ramazan” (Welcome Ramadan). These illuminated messages date back to the early seventeenth century.

Many mosques are illuminated when the adhan (the evening call to prayer) is recited, especially in Ramadan, as it’s a sign that the fast is almost complete for the day.

This three-day holiday marks the end of Ramadan, and is a time to attend communal prayers and give alms. People will visit their families for large meals, give to charity, and organise activities for children. It's one of the biggest holidays of the year, and everything closes down at this time.

Tips for travellers in Turkey during Ramadan