Out of all the things Turkey is famous for, one of the most under-rated is its ice cream. In contrast to other industries, we are not talking about some fake, copycat dessert for sizzling summer days but real Turkish ice cream with the unique ingredients of milk, sugar, salep and mastic.

Turkish ice cream is called Dondurma which is a literal translation to mean “freezing.” However, what distinguishes it from all other ice cream is the texture and consistency. Salep flour made from the orchid flower thickens it while the resin mastic makes it chewy.

Any Turk who knows their ice cream will say the best Turkish ice cream is from the southeast Kahramanmaras region. Called Kesme Dondurma, it contains more salep than other recipes, hence the consistency is so thick; you need a knife and fork to eat it.

Given the fame of this ice cream, it has naturally worked its way into the tourism industry, especially in the bustling cities of Istanbul. Vendors dressed in the fez, white shirts and red waistcoats serve Kahramanmaras ice cream from their street cart in a teasing but comical manner.

Constantly working the ice cream with long paddles, they pretend to serve it to the customer on a long stick but then whip it away as if to say, too late, you have lost your chance. They flip the ice cream cone upside down, but due to the thick consistency, it does not drip or drop on the floor.

Eventually, the vendor gives in, and the customer still has a perfect ice cream because the resistance to melting is a lot longer than standard recipes. 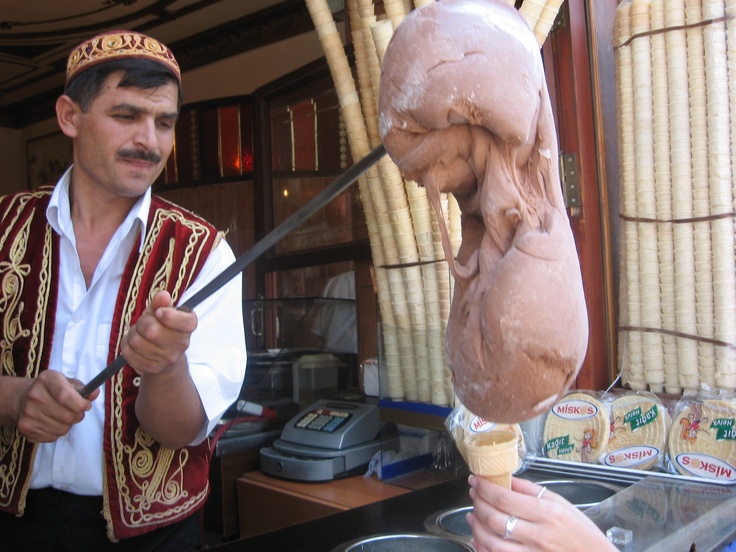 Other Famous Brands and Flavours of Turkish Ice Cream

For more than 300 years, Kahramanmaras ice cream has held the crown of ice cream in Turkey, but other regions are also claiming their unique original version. Ayvalik on the Aegean coast of Turkey boasts about its gum flavoured ice cream, while the Turkish Riviera hotspot of Simena, offers up homemade ice cream as a refreshing dessert after you have climbed the uphill path to the Byzantine castle.

Kuyucak village in southwestern Isparta also makes lavender ice cream, and since tourism is slowly increasing there, their brand might eventually go countrywide as well. Alacati Muhallebicisi has already done that as another local brand with more than 50 shops across Turkey serving up unique flavours.

In Istanbul, Ali Usta open since 1969, is one of the city’s famous places to grab a delicious ice cream. Serving up more than 30 flavours, he is closely followed by Yasar Usta who insists on using only fresh fruits and no preservatives.

The countrywide brand of Mado has more than 80 branches across Turkey and has shown remarkable success since its opening in 1992. Recently introducing sugar-free ice cream, they are one of the biggest success stories of Turkish ice cream culture.

If you pass a MADO ice cream shop, nip in and taste one of their kadayif or Kunefe desserts topped with a healthy dollop of ice cream. Both are wheat based recipes with syrup, but kunefe also has the culinary diet killer ingredient of stringy melted cheese. The strange combination of ingredients blends quite well, satisfying the palette instantly. 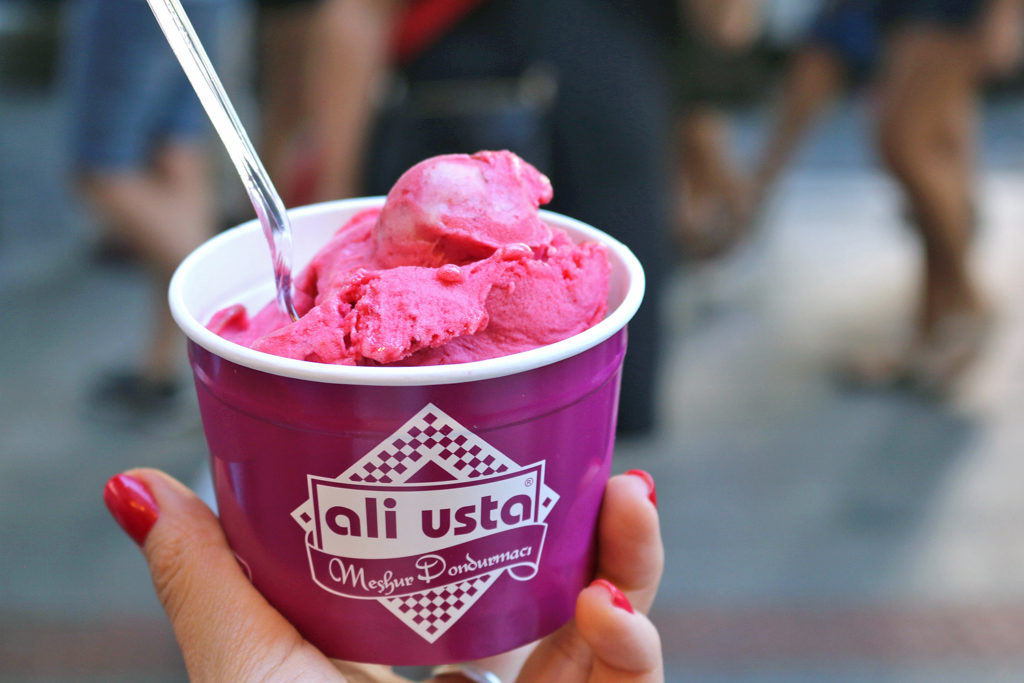 Meanwhile over in the Antalya region, many years ago, someone decided to burn the ice cream, and it took off in high fashion. The Kortuteli region makes their burnt ice cream (Yaniksi Dondurma) from the fatty milk of goats fed on wild thyme. It is that particular diet that adds to the distinctive flavour.

Bringing the milk to the boil while stirring continuously, it burns because of its high-fat content, then after cooling down, it is churned in a machine until ready. Such is the popularity of this regional delicacy; locals produce more than 200 kilograms every year, but they are worried.

The recipe originates from 1940, and without a workable method of mass production, their recipe will disappear from the history books as people become more tempted by the new generation wave of ice cream shops in large shopping malls.

Turkish Ice Cream Around the Globe

Experts say that every year, Turks each consume an average of 2.8 litres of ice cream. This is minimal compared to the USA stats of 18.3 litres or New Zealand who consume 23 litres, per person every year.

Traditionally, these stats are easily explained because some Turks believed ice cream caused illness such as colds, and sore throats although these old wives tales are starting to disappear. That has not stopped Turkey making money from ice cream though.

Missing from the list is any European countries, but that is because rules say only certified EU milk business can import dairy products. Hence when the UK leaves the EU, Turkish ice cream might start appearing on shelves in abundance.

We are firm believers in when in Rome, do as the Romans do, however, if Turkish ice cream just didn’t sit well on your palette, fear not, because Thai ice cream has come to Turkey. The newest ice cream trend to sweep the globe is Thai Roll Ice, and they have opened branches in Istanbul and Izmir.

The milk type mixture is frozen on an ice grill, rolled up and placed in a cup covered with many toppings and flavours. We will always be lovers of Turkish ice cream but love the global diversity of buying Thai ice cream in Turkey! 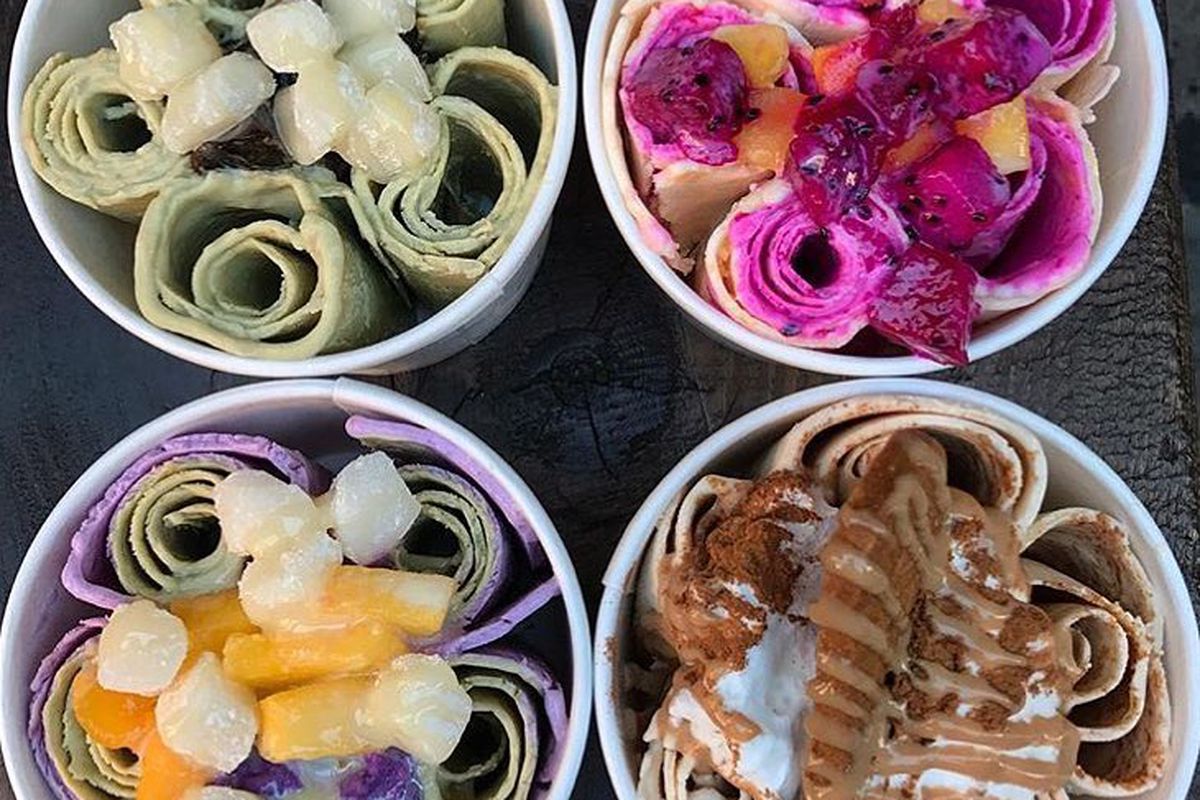