Sometimes it seems there has to be a payoff for living somewhere sunny and idyllic: something lurking in wait to spoil your fun, or to inflict discomfort.

Happily, Turkey is not like Australia, which has been termed the “epicentre of all things venomous”. Of course, there are creepy crawlies. Here are some I have encountered, and in some cases, fended off single handedly. 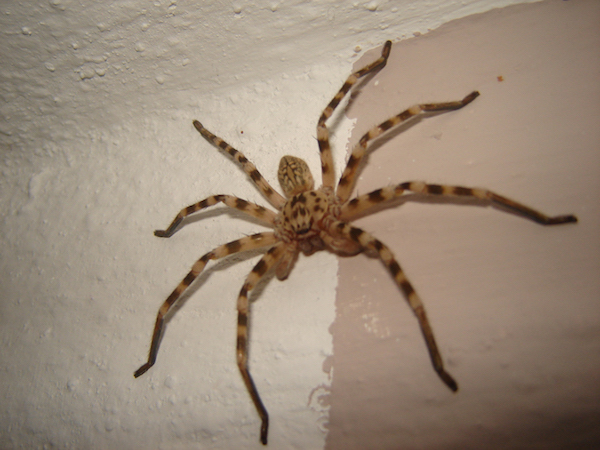 I have had just one brush with a spider, when I passed a web and felt something on my face. I thought I had flicked it away quickly but I was not quick enough. The little blighter nibbled me and I woke up to a swollen eye in the morning.

The spider I see most frequently in my home is a Giant Huntsman Spider (right). It’s large and distinguished, with black and yellow striped legs. It seems harmless enough and goes about its business as I go about mine. Coincidentally, one decided to camp on my living room ceiling at the same time a friend posted a picture of the same species on Facebook. “Anyone know what type of spider this is?” she asked. “It's the brother of the one on my ceiling at the moment!” I replied.

There are two types that appear prevalent here. For those of you with a predilection towards stone houses, beware! Creepy crawlies seem to like sharing my stone house. I have never been bitten by either type although I understand that the one resembling a rubbery, creepy crawly child’s toy can bite. Apparently, the bite can leave a slight numbness, but nothing more serious. The hairy one turns up in my kitchen sink. Why, I do not know, given that it does not seem to be a very confident swimmer. I do not kill either type, I am a complete pacifist when it comes to any creature and I suspect they know it. 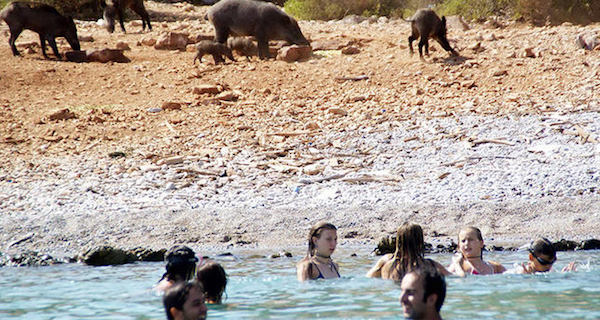 I see evidence of wild boars when out walking my dogs, but I have only ever seen one. Like humans, they belong to the least tidy of creatures in the animal kingdom. However, instead of piles of rubbish, they leave behind mole-like mounds of churned up soil and upturned plants where they have been foraging. Friends have seen them strolling nonchalantly through the local village of Gumusluk as they come down from the hills when the weather turns cold and food is scarce. The extraordinary picture above shows them congregating close to Bodrum as tourists swim nearby. Given the size of these beasts and their fangs it would be unwise to engage with them, especially when they have young.

As a pork-eating westerner I have been offered dead boars on many occasions, as the Turks hunt them. As they are Muslim it is not in their culture to eat them. I have yet to be convinced that it is in my culture to eat them, either.

Snakes seem to get a bad press, featuring high on people’s “most dreaded” lists. But are they really dangerous out here in Turkey?

One fine spring evening, I spotted a long brown snake sunning itself at the bottom of my empty swimming pool. Not knowing whether it was benign or dangerous, I snatched my Mediterranean Wildlife manual off the shelf. I was relieved to read that it was an innocent Whip Snake and not venomous. I was not alone in eying the snake because, at the same time, my neighbour appeared with a large bludgeon-type weapon.

I charged downstairs and convinced my neighbour to leave the poor beast, and convinced his distraught wife that my new pet had no intention of entering her house (as she was convinced) as snakes were more scared of us than the opposite, and that he couldn't get out of the pool. I promised that in the morning I would have it removed and transferred to a more suitable habitat. 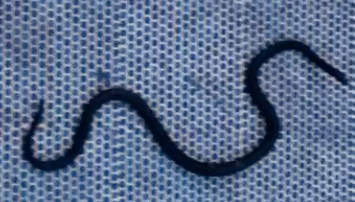 Early the next morning, I went down to the pool to net the snake, only to see there was no snake! Whippy had managed to scale the steps of the pool escape. Where to? I had no idea. At least my neighbours would be none the wiser: for all they would know, I had proved true to my word. However, moments later, I spotted Whippy curled up outside their front door. Armed with my net, I managed to capture him and transfer him to new pastures green.

On another occasion, I heard Hasan the Water Man pull up outside in his van. As I collected the empty demijohns together a kerfuffle broke out outside my front door. I could hear stone breaking on stone – not the usual sounds I associate with water being delivered. As I fell out the front door to investigate I saw Hasan bludgeon a small, harmless-looking slithery creature outside my open kitchen window.

“Stop! The poor thing” I cried. He didn't stop until all life had been extinguished from the small snake. Hasan looked at me incredulously, explaining he had saved me from having an extremely dangerous creature climb through my kitchen window. I grabbed my dependable Mediterranean Wildlife manual. The snake was a viper that might not have proved to be quite as harmless as Mr Whippy. Even I have a limit as to what I share my house with.

Despite this, one tends to see snakes only in June, and even then rarely. There are in fact only two or three species that are venomous, one of which is native to the UK - the adder. The vast majority of snakes in Turkey are not venomous and they are more scared of us than we are of them. 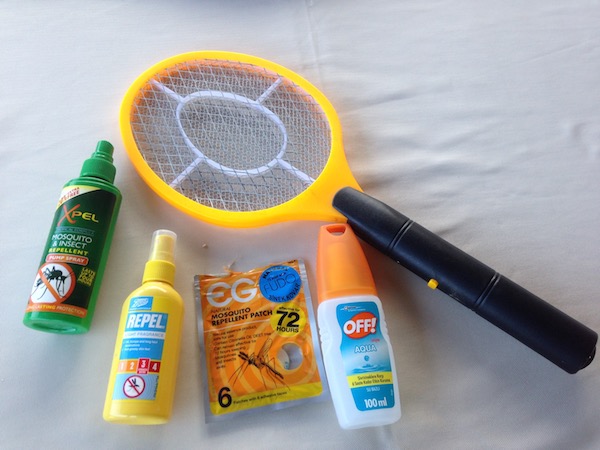 Although not dangerous, mosquitos are the real villain of the piece. It is well known that they tend to prefer the flesh of the newly arrived Europeans, and there does seem to be some truth in this as I am rarely bothered by them these days.

To avoid being eaten alive you can opt for an insect repellent. The Turks also have two further deterrents: one that looks like a battery-operated tennis racket, and the other a simple pot of basil. I prefer the high-tech deterrent, it seems to be more effective and provides a bit of sporting fun during the evening.

Either way, an arsenal of preventative measures such as those illustrated is definitely called for in order to ensure a happy mozzy free stay in Turkey.

When I first started visiting Turkey, my friend, Mustafa, used to shout at me for not checking or tapping on boulders or rocks with a stick to scare off any 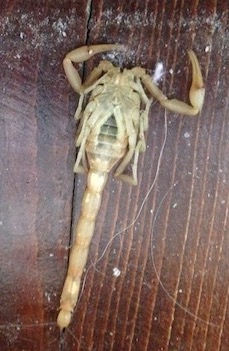 scorpions prior to sitting down. It is a habit I have adopted. He also told me that you do not tend to find scorpions in locations close to the sea as they do not like a salty atmosphere. I live only a few hundred metres from the sea and had never encountered any scorpions until I discovered this very dead one downstairs in one of the bedrooms.

It is the only one I have seen in nearly three decades of visiting here and it remains a mystery to me as to how it got there. I can only think it was deliberately deposited there by a 'friend' who was trying to encourage me to vacuum more often!

However, scorpion stings can be nasty and some experience an allergic reaction to them, as happened to my resident scorpion expert Mustafa a few years back, and he ended up spending the night in hospital on a drip. If you’re stung, go to the hospital or doctor to get checked out.

I've included street dogs here only because there might be a perception that they are dangerous. However, they are generally only in need of a pat and a bit of affection. Their plight has improved greatly on the Bodrum peninsula over the past decade, and it has been a long time since I've had to leave a restaurant after seeing a waiter kicking a dog. 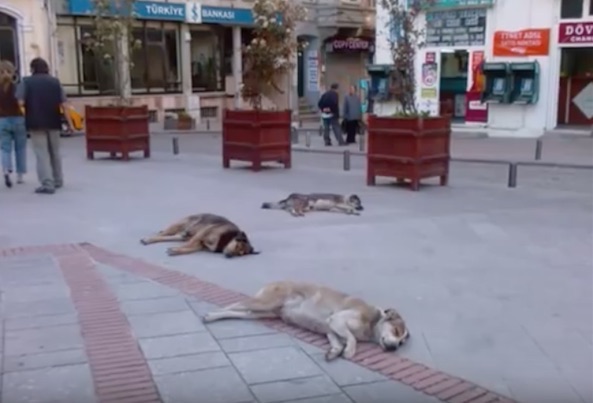 These days there are various societies feeding and caring for the dogs, and many restaurants and bars look after them. Yes, they can be a pest when you're sitting at a table trying to enjoy a drink or a meal but I never complain as I suspect this can provide a trigger for a spate of dog poisoning. This is an all too often regular occurrence out here, particularly before the tourist season starts, proving that the most dangerous animal in Turkey is the same two-legged variety found in all parts of the world.

Despite all these close encounters with all these supposed dangerous animals in Turkey, I have managed to survive relatively unscathed for years. Now, where is that mosquito racket?