Carpe Diem: inside the Bodrum Cup

“What is that?” I exclaimed excitedly. I was looking out my living room window over the Aegean, over the whitewashed villas in Bodrum at a huge flotilla of classic wooden sailing boats, or gulets are they are known in Turkey, with their sails aloft, silently gliding by.

I realised it was the famous Bodrum Cup - and it was passing in front of my newly acquired dream house overlooking the Aegean. 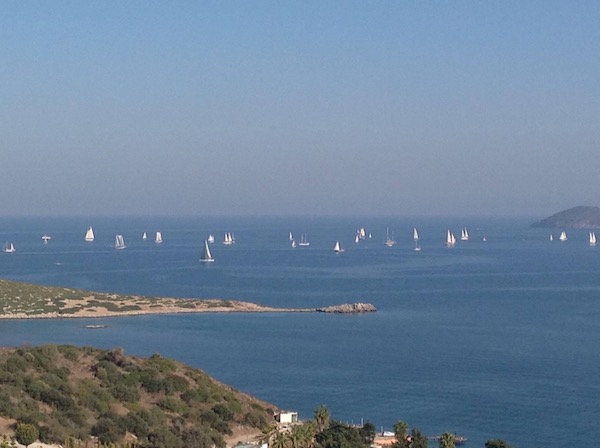 Little had I thought after my first gulet trip in the early 90s  I would be enjoying a bird's eye view of this traditional curtain-closer to the Bodrum summer season.

The route of the race changes annually. Some years it takes in a few of the neighbouring Greek islands such as Kos and Leros but the 2017 event remained loyal to the peninsula, racing between the bays and marinas of Bodrum, Yalikavak and Gumusluk . “Racing” conjures up the wrong impression: gliding would be a more accurate description, particularly as there was little wind, making sailing more challenging than usual.

On the penultimate night the gulets anchored in my local, tranquil bay of Gumusluk Bodrum and so a few of us decided to pay them a visit. I had never seen Gumusluk quite like this. It was a boat show of every shape and size, a wondrous display of some of the most beautiful and expensive vessels in the world. 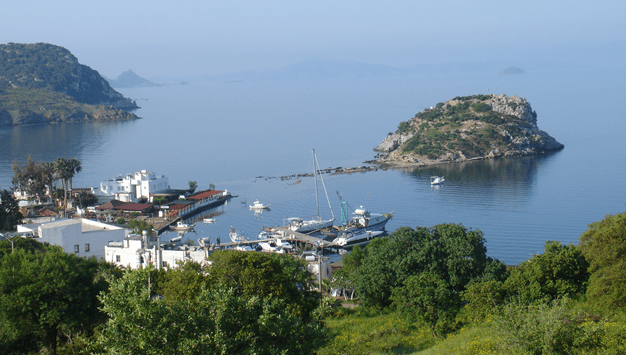 Gumusluk is famous for its fish restaurants that line its largely unspoilt and sheltered bay and they were all packed full to the brim. The restaurants are also famous for being amongst the more expensive places to eat on the Bodrum peninsula but tonight nobody would be querying their bills. Rich boat owners would be devouring expensive fish and somehow that seemed a particularly apt meeting. 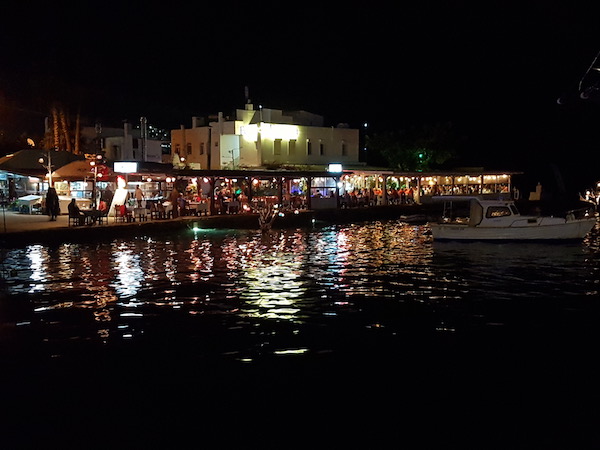 Of course, we locals know how to manage on a budget on the peninsula so we headed to the Gumusluk Belediye Cay Bahcesi occupying one of the best positions on the water's edge and the keenest prices for snacks and a beer. Virtually every bay has its own waterside Belediye Cafe, allowing local people, or those on a more limited income, to eat and drink at lower prices.

A magnificent, opulent boat called 'Carpe Diem', moored in front of us, caught our eye and we fantasised about being on board in the morning when it set off for its final leg of the race (or so we thought) to the upmarket newest Marina on the peninsula, in Yalikavak – about an hour's sailing away.

Two of our party disappeared to buy some cigarettes and returned like excited children from a sweet shop accompanied by a pleasant, smiling, youngish man. They had found none other than Captain Ekrem, the Captain of the Carpe Diem. Captain Ekrem was about to turn our fantasy into reality. He promised he would take us aboard the following day and as they would be setting off for Yalikavak at 10am. We agreed to meet for breakfast at the Belediye Cafe at 9am the next morning and then Carpe Diem: seize the day. 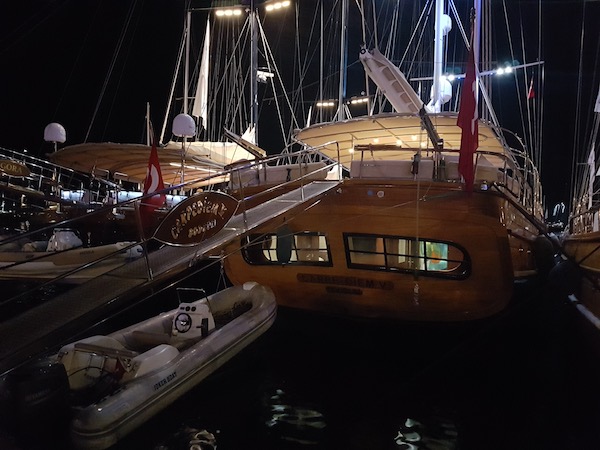 At the time I didn't ponder on how many Carpe Diems there might be. How many boats, houses or hotels are called Carpe Diem? As we ordered our breakfasts, one of our party went on board the Carpe Diem to look for our swashbuckling hero of the day, Captain Ekrem. Captain Ekrem was nowhere to be found. There was not Captain Ekrem aboard the Carpe Diem, she was told. At least not that Carpe Diem. We discovered he was aboard another Carpe Diem, and had set sail about half an hour ago. More than likely, after the excesses of the night before hadn't even given us a second thought.

We consoled ourselves with the fact that if we couldn't quite 'seize the day' then at least we had 'seized the morning' and had enjoyed a lovely breakfast in a glorious setting amidst some of the most beautiful boats in the world. We also discovered that our Carpe Diem wasn't part of the race at all - it was just there for show. However, our luck was about to change: one of our party had spotted a neighbour of hers and had gone off for a chat with her. 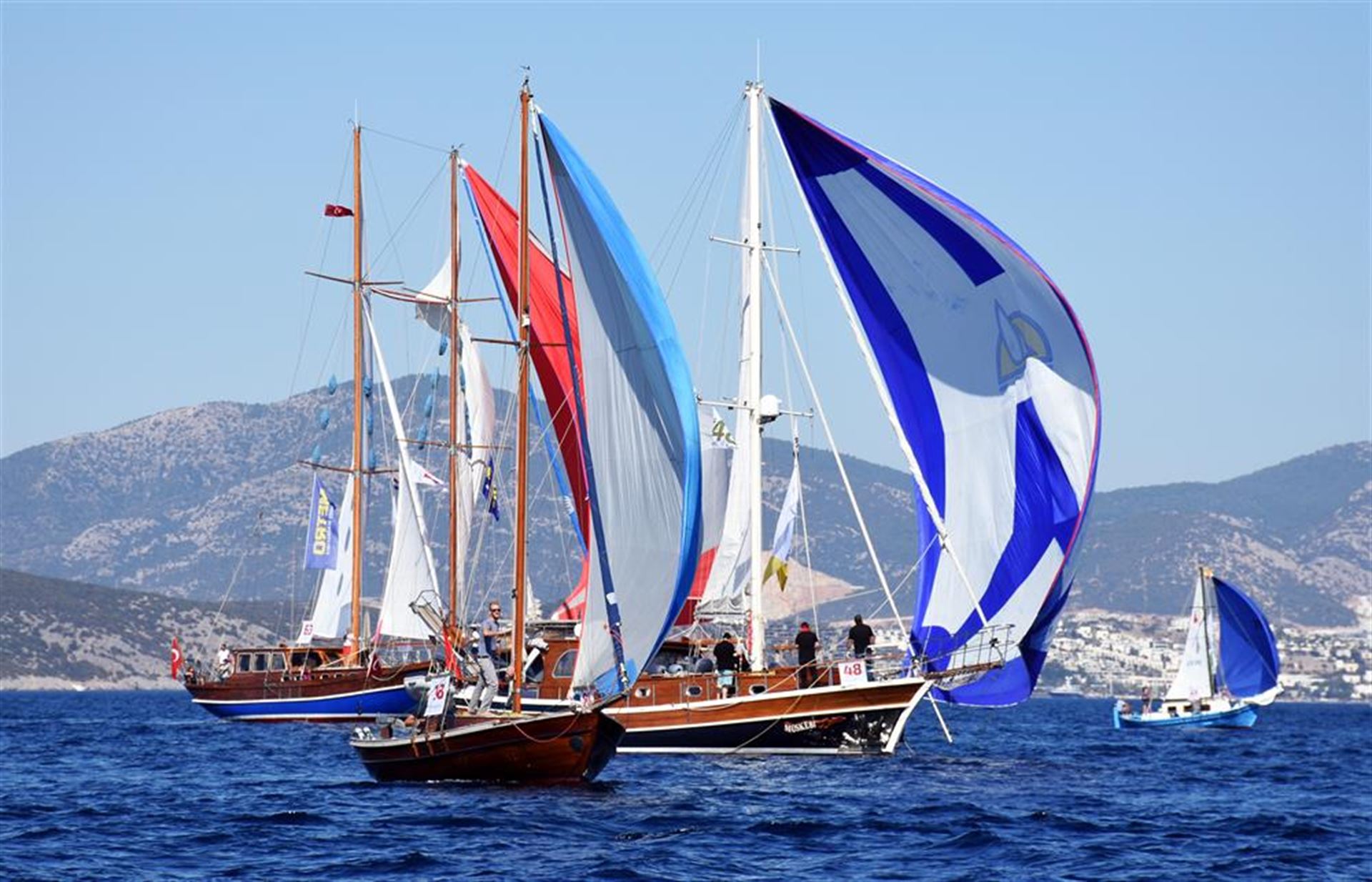 We found ourselves aboard the Aybel tour boat on our way to Yalikavak courtesy of Captain Koksel. It might not have been the Carpe Diem but it was our Carpe Diem. We weren't just at The Bodrum Cup; we were in The Bodrum Cup; amidst all those classic sailing yachts and on this occasion I was looking from the inside out as we passed by my house en route to Yalikavak. Captain Koksel had not only seized our day but saved our day. 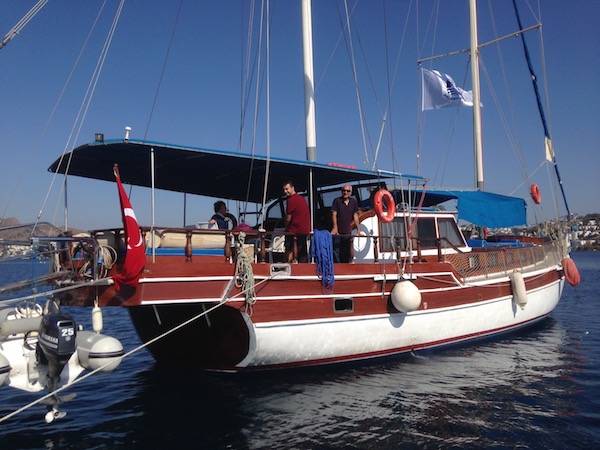 Right in the heart of Bodrum Centre, this luxury designed mansion has six bedrooms and an incredible view across the sea and castle stretching endlessly – this villa offers an exclusive lifestyle for those seeking privacy in the centre.