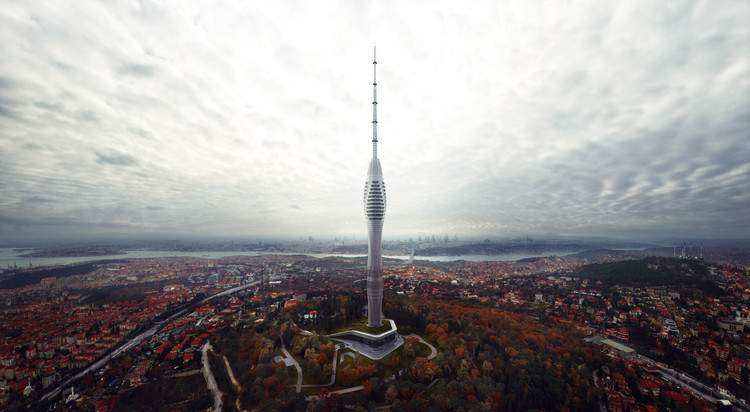 As Camlica Tower, a new radio tower on the Asian side of Istanbul comes to the end of construction; visitors will soon be able to marvel at a stunning and unique view across the city. The part of the tower that has been designated as a restaurant complete with observation point is said to reach 388 metres in height.

The construction on Camlica Hill, which overlooks Bosporus, commenced in March and the new tower has been created with the main aim of putting an end to the visual eye sore of several outdated, giant television antennae in the area. The tower has 10 separate floors that are already complete and it is thought that these will be used for social housing. The construction of the further five floors is still ongoing.

The concrete section of the tower stands 221 metres high and is complete with a huge steel support that will become the new home of the antennae currently in the process of being installed. The antenna that will sit on the very top of the tower weighs a colossal 1,400 tonnes.

The tower has been built to sit approximately 576 metres above sea level and will have four floors underground and a further 49 floors in total. Currently there are 300 engineers and crew working flat out to get the construction finished.

There will be a restaurant on both the 39th and 40th floors with observation decks on the 33rd and 34th floors.

Ministry of Transport, Maritime and Construction

The Turkish Ministry of Transport, Maritime and Construction appointed an architectural company to create the design of Camlica tower which now boasts a silhouette that changes in accordance with the views from the different directions available in the city.

Features of the Tower

As well as observation decks and restaurants, there will be exhibition spaces available in the tower plus various cafes and panoramic elevators that will provide stunning 180-degree views over Istanbul. The elevators will be situated on two sides of the structure and will afford visitors views of historical landmarks and iconic buildings that can be seen on the European side of the city, as well as to the North and vast Black Sea coast.

Once finished, Camlica Tower will be the largest structure in the city and is set to rival a 261 metre tall skyscraper that is situated on the European side of the city. Officials have revealed that they expect there to be more than four million visitors to this new tower annually, providing Istanbul with a new landmark for tourists.