Latest news: Turkish economy to thrive under Trump-led US

Economy to improve under Trump

Turkey’s economic and trade relations with the US will improve under Trump, according to one expert.

Head of the Turkish American Business Association (TABA) Bora Gurcay told the Hurriyet Daily News that he’s “optimistic” about the bilateral ties between the two countries. “There has been an obvious slowdown in U.S. actions abroad for a while. This will end soon ... Trump knows the Turkish economy as a foreign investor in Turkey.”

He added that Trump’s views on trans-continental trade agreements paralleled Turkey’s. “I believe that ties between the two countries will likely be better in the next period than they were in the last couple of years,” he noted.

The US-Turkey trade volume currently stands at around $19 billion, which is a low number given the potential of trade between the two countries.

Gurcay said TABA members in the US are planning around $350 million investments for early 2017. “One of these companies plans to make a greenfield investment in Turkey and another will position Turkey as a regional hub for its operations,” he said.

Donald Trump already has business interests in Turkey, and his Trump Towers Istanbul have experienced a surge in interest after the US election. Trump has said he will step down from business to concentrate on the presidency. 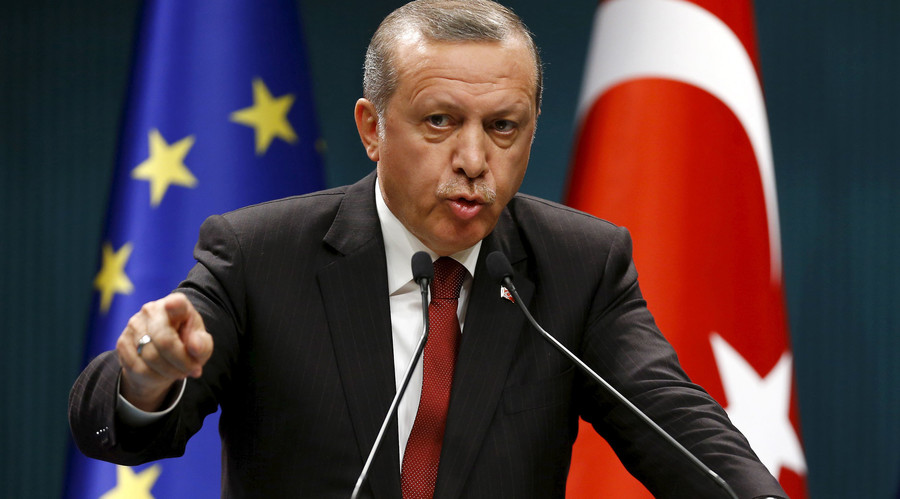 President Recep Tayyip Erdogan has asked the EU to show its “good intentions”, keeping its promises on visa liberalisation for Turks and humanitarian aid for refugees.

“If the EU is ready to put aside its meaningless hostility and double standards against Turkey, we are ready for full membership to the EU,” said the president, saying Turkey had run out of energy to “chase” Europe.

“The term of one-sided commitment is over,” he added. “If Europe does its part, then we will stand behind all of our promises.”

In March, Turkey and the EU signed a refugee deal, aiming to discourage dangerous migration over the Aegean Sea by taking harsher measures against traffikers and improving the lives of the almost three million Syrian refugees already sheltering in Turkey.

The EU promised Turkey visa-free travel for Turkish nationals within the Schengen zone, and acceleration of EU membership talks.

Turkey applied to become an EU member in 1987, and accession talks began in 2005. However, in November the European Parliament froze EU-membership talks with Turkey, in response to the post-coup political situation.

An angry Erodgan has now threatened to throw out the migrant deal, which will mean an increased flow of refugees into the EU.

EU leaders will evaluate EU-Turkey relations at a summit in mid December.

There’s 2.5 times more available property in Turkey's largest city - villas and apartments in Istanbul - than there was three years ago, a new survey shows. In 2014 there were 464,974 available units, this figure rose to 1.14 million this year.

A deficit of apartments in Turkey ’s largest city will likely be quickly filled as the population continues to grow.

Data company TUVIUS also revealed that commercial property sales is now US$249 billion annually, a huge increase from the 2014 figure of $83.15 billion.

Turkish real estate companies have said offering citizenship to foreigners who buy property in Turkey could generate US$10 billion.

At a real estate fair in Baku, senior representatives said they were happy with recent government measures attracting more foreigners into the property market, but added it was time to take even greater steps.

Around 23,000 properties were sold to foreigners last year, adding up to $5 billion in sales. If citizenship is granted, that sector could well double.

It’s thought the offer of citizenship will be rolled out in 2017, although dates haven’t been finalised - nor has the minimum property value amount required for citizenship.

The Turkish government’s extending its fuel support for charter tourists into 2017, with the aim of attracting higher numbers of foreign tourist arrivals.

The $6000 fuel subsidy for each plane bringing tourists to certain Turkish airports will encourage airlines to promote Turkey as a holiday destination - a much-needed measure after a poor year for tourism.

Foreign arrivals to Turkey dropped to 23 million in the first ten months of the year, a 31% drop over the same period in 2015, Tourism Ministry data shows.

Security concerns prompted many to stay away - although Turkish Culture and Tourism minister Nabi Avci thinks these concerns have been over-represented in the media.

“Terrorism is a global problem and unfortunately there were terrorist attacks in Brussels and Paris over the last years as well as in Istanbul and Ankara. The attacks in Turkey have been portrayed in a much more negative manner than the attacks in Europe,” he said.

Russian numbers also declined thanks to sanctions from Russia, but there’s a light at the end of the tunnel there: in October more than 220,000 Russians visited Turkey, a huge rise over former months. Russians greatly favour Antalya, and are the region's biggest buyer of Antalya villas and apartments.

Turkish exports rose to $11.95 billion in November, an increase from $11.38 billion last November, according to the Turkish Exporters’ Assembly. This represents a 5% jump, and a recovery after a drop over the first few months of the year.

“We will see our export growth, which turned positive in November, to keep surging as a decline in commodity and oil prices came to an end and exports to neighboring countries, especially Russia, started to recover,” head of the Turkish Exporters’ Assembly, Mehmet Buyukeksi said.