Property Turkey Blog Why Kas is A Holiday Hotspot

Why Kas is A Holiday Hotspot

The small holiday resort of Kas on the Mediterranean coast of Turkey is popular with holidaymakers and expats purchasing second homes, either for permanent living or vacations. Reasons for this are bountiful but the initial lure and appeal comes from its ambiance as a Turkish town that has embraced the modern world, yet stayed true to its roots, while outgrowing the status as a small village.

The cute whitewashed houses with wooden shutters, covered with trails of pink Bougainvillea are reminiscent of its Greek history while the old Roman theatre portrays an era even further back in its historical timeline.

Along the harbour front, small fishing boats distribute their catch of the day, while strolling uphill on the old cobbled main street, takes you past family owned boutique shops, eventually ending at the old Lycian sarcophagus, the main landmark of the town.

Foreigners have a large choice of B&B accommodation, all-inclusive hotels or self-catering apartments to choose from and they arrive via one of two airports; Antalya that is a four-hour transfer or preferably Dalaman that is just 2 hours.

Mostly spending their summer months in the resort, Kas has exceptionally warm weather apart from a couple of months of rainfall at the beginning of the year. Taking advantage of the Mediterranean climate, roof-top dining is a popular trend since Kas is built in a bay, with a magnificent view of the coastline and crystal blue sea of the Turkish Riviera.

So with pride, this peaceful town boasts of its extensive facilities in terms of bars, restaurants and hotels, but the lure goes further than that. 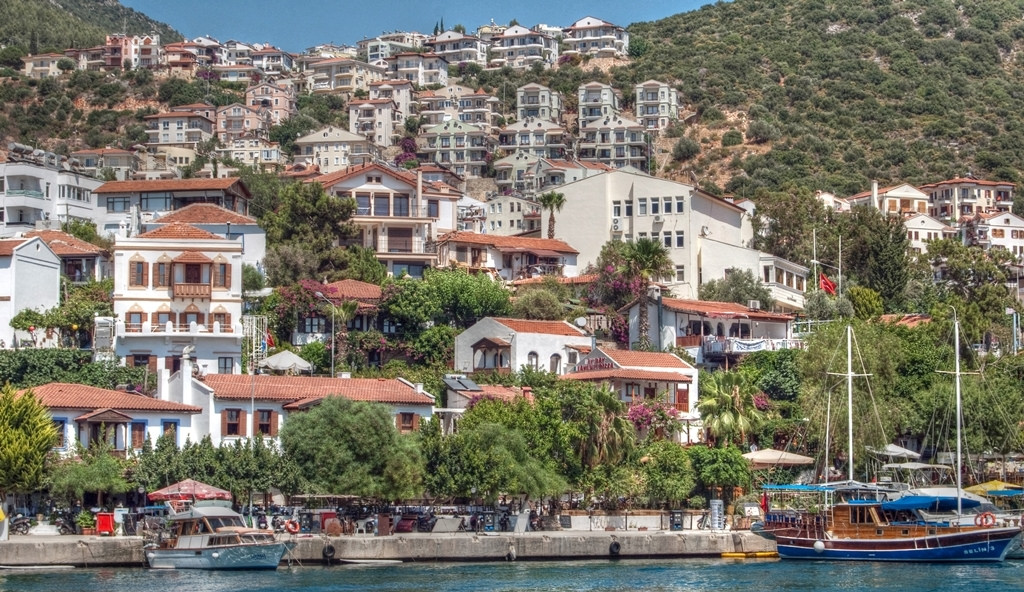 Why Everyone Loves Kas

Those who like to live life on the edge flock to the town because Kas specialises in four activities; canyoning, paragliding; scuba diving and sea kayaking. Professional instructors teach eager beginners or accompany advance experts on the best areas and spots for canyoning in the neighbouring countryside.

As long as the wind conditions are favourable, tandem paragliders often sail down from the nearby mountains while others sign up for sea kayaking lessons to the sunken ruins of Kekova and the old castle of Simena. Lastly the waters of the Mediterranean Sea surrounding Kas have an impressive collection of sea life as well as plane and ship wrecks. That is why sports junkies love the town so much.

In the Area: Sites to See

Thanks to its strategic position on the D400 highway, Kas is an ideal base position from which to explore the attractions of the surrounding coastline. The neighbouring resort of upmarket Kalkan is as impressive or, just 18 kilometres away is Kapatus, one of Turkey’s most famous beaches. Known for its sparkling, clear waters, the small beach, tucked into a small mountain cove is visited by many, despite the winding, long, stairs to reach it.

Further up the coastline is Patara that was one of the first resorts to embrace mainstream tourism when it took off in the 70’s. These days, it is more of a backpacking rustic village but many people visit for the day to see its ruined city and beach that is the longest in Turkey. For those who enjoy history, the historical sites of Xanthos and Letoon, and Tlos are open every day.

The good aspect is that all neighbouring attractions can be reached via the all-encompassing public transport system but many people hire a car instead and travel with a free schedule, to just go where the road takes them. 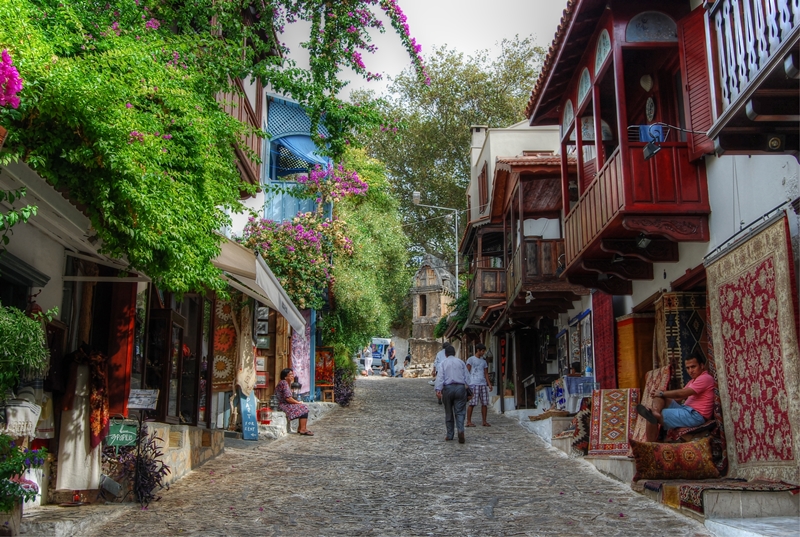 Head to the Greek Island of Meis

Kas is also the centre port of call for the daily ferry across to the colourful Greek island of Meis. Reached within 20 minutes, this small island, stuck in time boasts of traditional restaurants, small boats and a style of architecture in the houses that amazes everyone because of its dollhouse-like appearance.

From the top of the hill, visitors marvel at an amazing panoramic view but the favourite part of the day is to catch one of the small speed boats sailing around the island to the Blue Cave, of which the boat can only go through the entrance if everyone lies down! Once inside, the sparkling blue waters reflect off the walls of the cave leading you to believe you really have landed in a fairy-tale magical place. 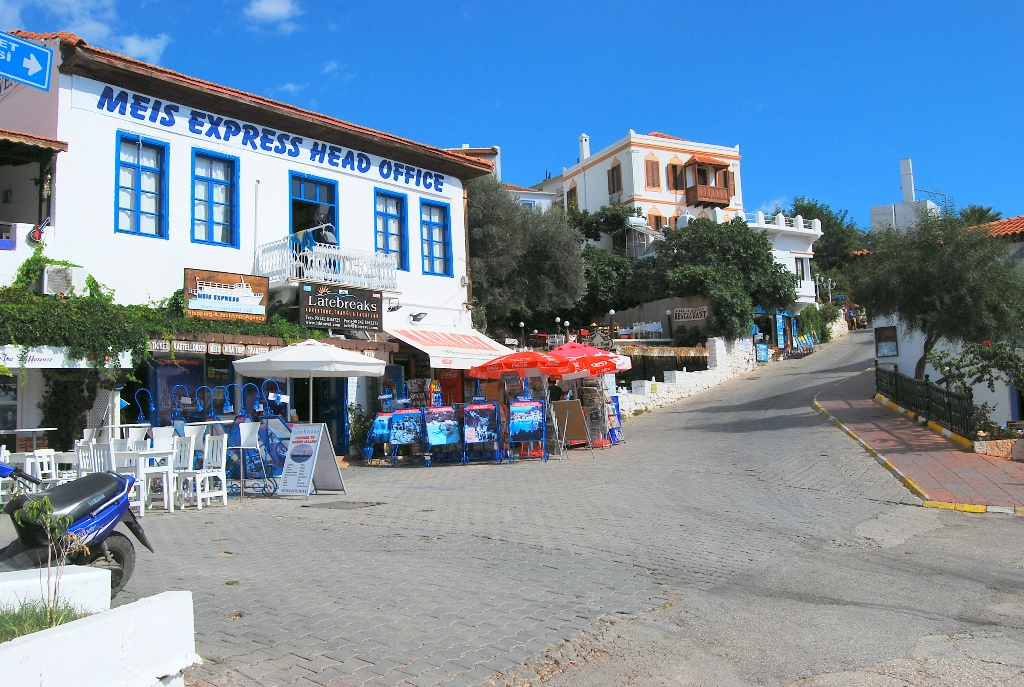 Sailing on the Turkish Riviera

Kas is part of the Turkish Rivera stretching from the Aegean coast to the Mediterranean region of Antalya. Normally on a four-day cruise, traditional Turkish gulet boats dock in daily at Kas for passengers to spend a couple of hours exploring the region.

Otherwise, daily boat trips leave the harbour every morning for a trip to scenic small bays for swimming breaks and BBQ lunches. The sunken ruins of the ancient city of Kekova, is one of the highlights as is exploring the rustic village of Simena, while sampling their homemade ice-cream that they are world-famous for. In fact, unless you really hate the sea, it would be unusual to visit Kas without spending at least one day sailing. 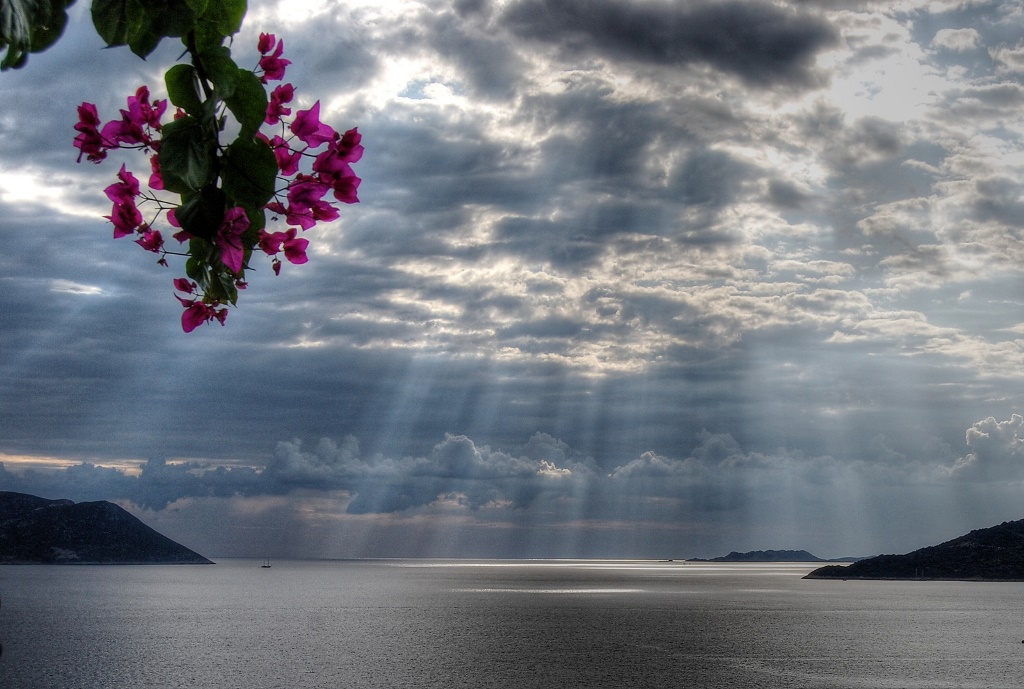 Why You Should Visit

Kas is a small holiday resort, popular with Turks and foreigners. It provides all amenities and facilities needed for a perfect break away, yet unlike so many other touristic places in Turkey, it has not sold out its culture and traditions to bring in the money. Visit it even for the day and you won’t be disappointed. 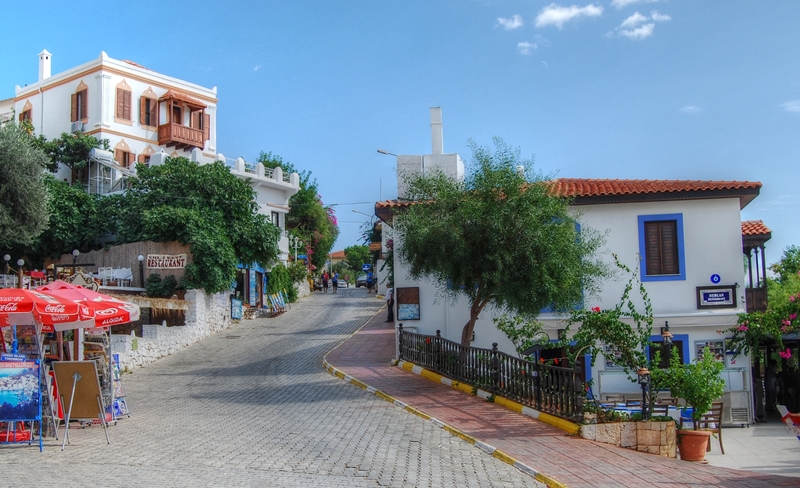 Upgraded with the last two years to European standard, this home in Kas has recently been reduced in price to ensure a quick sale - interest will be high in this one so act today to secure your very own Turkish nest egg and enjoy long summer holidays in the Mediterranean sun.

Just metres away from the sea area is this authentic style five bedroom house with amazing panoramic views and a touch of class throughout to make it ideal for long term living on the peninsula. A large swimming pool and good sized landscaped gardens complete this residence.

Well placed with the town centre just minutes away, but also enjoying spectacular sea views is this competitively priced apartment listed as fully furnished and ready for you immediately today. Practically brand new as current owners only visit once or twice per year.