From the east to the west, many ancient city ruins adorn the vast landscape of Turkey. Previously belonging to various empires that have ruled the land over time, their stories now belong in the history books. Some like Ephesus are still a bustle of activity, receiving thousands of visitors every day who are eager to see the excavated and restored landmarks.

Others, however, welcome little or no visitors and their historical timelines do not receive the recognition or praise they so rightly deserve. One such example is the ancient city of Priene in the Western Aegean region of Turkey. Local travel agencies sell tours to it, but the international travel ignores it, therefore neglecting its historical importance and connection to Alexander the Great. 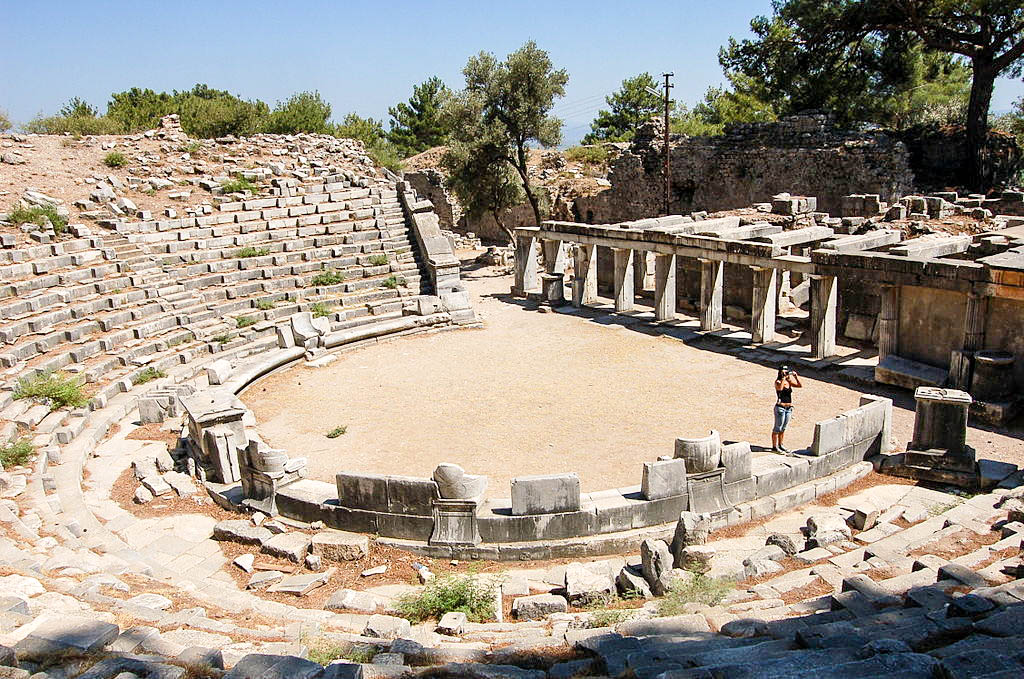 The History of Priene

The current day ruins are not the original foundations or structures of the first city. Historians cannot find these. Ancient texts show Pausanias, a traveller who lived during Roman times said the founders of Priene old city were the son of Neleus from Athens and Philotas of Thebai. This explains the loyalty of Priene’s citizens to the important ruling centre of Athens.

According to archaeologist Akan Atila, who has studied and visited many ancient structures throughout Turkey, the ruined city we see now started life in 350 BC. It spread over four terraces enclosed by tall city walls. At one stage, it was an important sea trading port with Venice and one of the 12 cities of the Ionian kingdom. The Persians also invaded it at one point. Sadly, in the 13th century, citizens ultimately abandoned it, and it was not until the 19th century when excavations began to unravel its story. 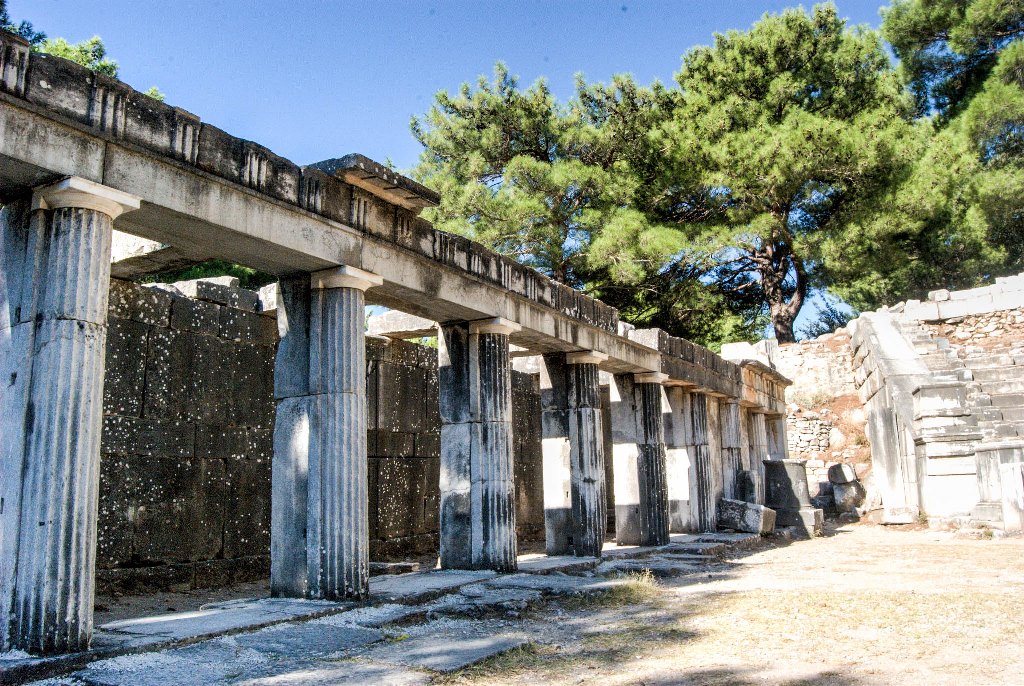 The small but iconic theatre of Priene receives immense praise from historical circles and educational study programs. Ancient Hellenistic theatres are renowned for their common architectural position, tucked neatly into the sides of hills, and experts regard Priene theatre as one of the best despite its small size.

Its original 4th century BC layout changed and altered as time went on but these days, anyone standing in the centre has a steep view in front of them, of 6500 seats in a half circle fashion. Stairs separate the seating area into six sections and VIP marble seats with majestic backs and arms; take pride of place in the front row. In the middle of the front row, a small stone altar devoted to the god Dionysus reflects his status in Greek mythology as the god of wine, grapes, theatre, and religious ecstasy.

Following the designated path around the ruined city, visitors pass other notable landmarks such as the theatre, Bouleuterion, and houses. However, the Athena Temple, backed by a large hill captures all the limelight because of its connection to one of the most famous kings of all time, Alexander the Great. 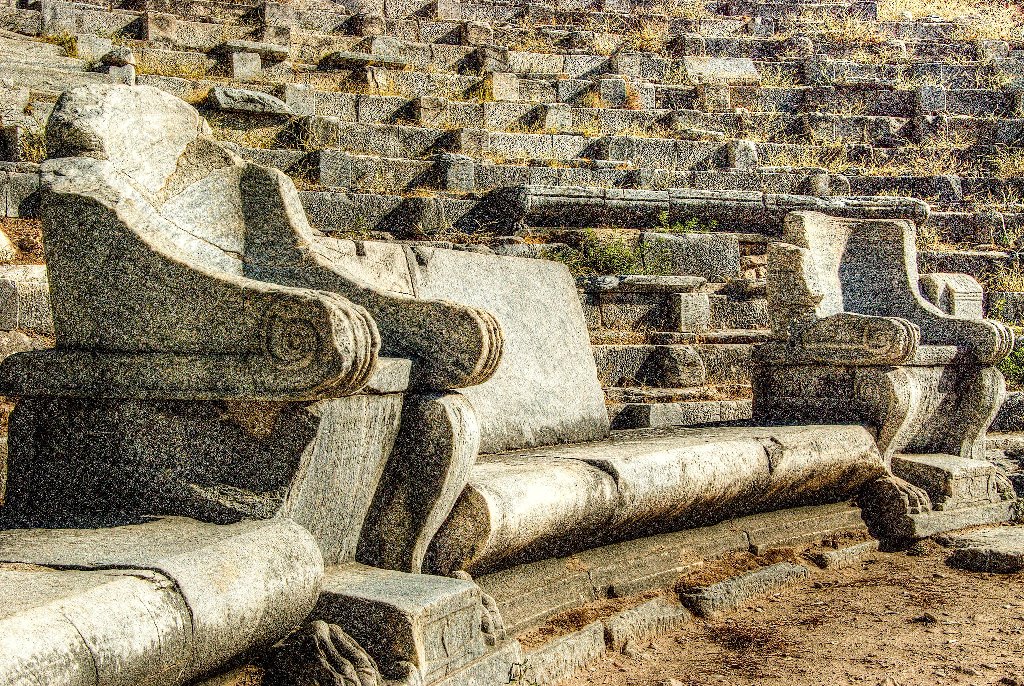 The Temple of Athena, the Priene Inscription, and Alexander the Great

Even though just the foundations and only five majestic columns of the original 34 still stand, Priene’s most photographed landmark is the blue-grey marble Athena Temple. The same architect of the Halicarnassus Mausoleum, one of the Seven Wonders of the World designed it. Athena Polias was the goddess of wisdom, and many temples across ancient Greece were dedicated to her. Such is her iconic status; it was the most splendid building in Priene city.

In the 19th century, the architect Richard Pullen discovered an ancient dedicatory script inside the former walls of the majestic Athena Temple of Priene. Now held in the ancient Greece section of the famous British Museum, it caused much celebration in the classical world because of its connection to the famous warrior Alexander the Great.

As he proceeded along this stretch of coastline in his campaign to get rid of the Persians, he came to Priene, and the citizens were eternally grateful. The inscription details the funds he gave towards the temple and says “King Alexander dedicated the temple to Athena Polias.”

Historians also managed to deduce that near the West Gate, citizens turned a house where Alexander stayed into a holy place out of admiration for the respect he showed to Priene. Alexander the Great made Priene into an example of a modern city, and his actions inspired many others. After his financial contribution towards the temple, many other prominent citizens built public buildings using their own funds. 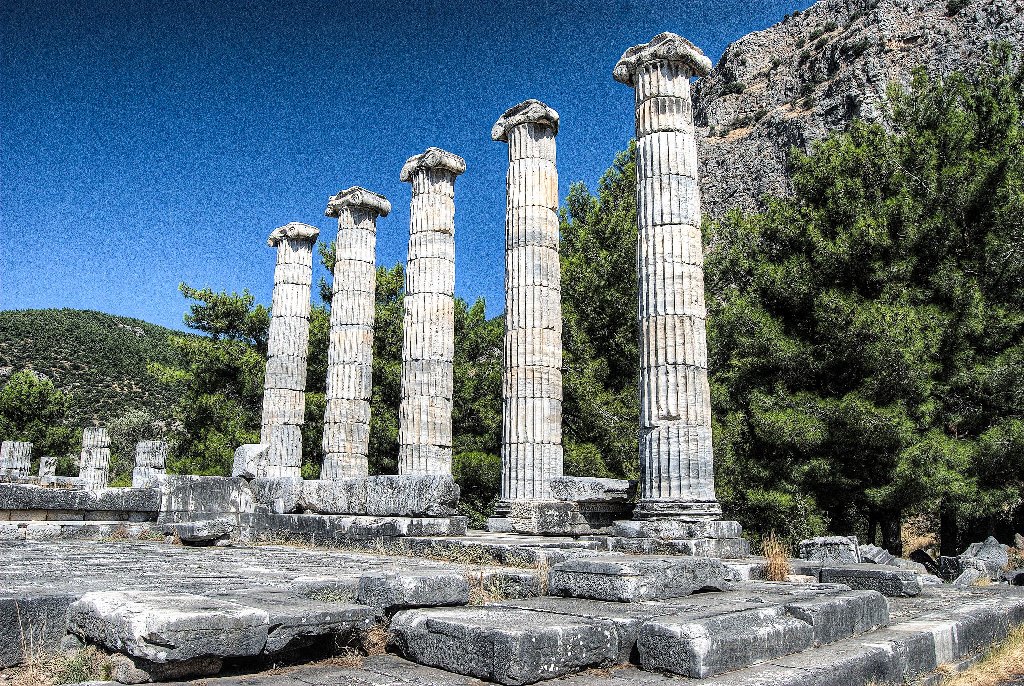 Places to Visit Nearby

Just a 20-minute drive from Priene, are the ancient ruins of Miletus city, another historical wonder deserving admiration. This metropolis was another city belonging to the Ionian league, and because of its coastal location achieved great fame as an extended sea trading and business area. Its Hellenistic theatre nestled into the hillside is worth seeing for the vomitoriums that are passageways behind the seating area. Not many other historical ruins in Turkey still have this old feature intact.

Visiting Priene and Miletus takes approximately 5 hours so end the day by seeing the Temple of Apollo, in Altinkum. Today, it is a popular holiday resort and British expat haven, but in history, citizens from Miletus completed an annual pilgrimage to this former pagan worshipping oracle centre. At the end of the day, this iconic landmark is a pleasant place to watch the sunset over the temple, signifying another day that enters the history books.

Note: These days, local tour agencies sell the triple historical delights tour of Priene, Miletus and the Apollo temple of Didyma. For travellers without a car, this trip is advisable because public transport does not go in that direction.