Property Turkey Blog Our Izmir Guide: Part of the About Turkey Series

Our Izmir Guide: Part of the About Turkey Series

Welcome to our Izmir Guide for travellers. Whether this is your first visit or a repeat, going to Izmir is something every tourist should put on their bucket list. Sitting on the western coast of Turkey, in the Aegean area, Izmir is Turkey's third-largest city. For decades, its reputation as a forward thinker and leader of trends has put it on the map.

Offering everything a fantastic urban landscape should, expect a good nightlife and shopping scene, and plenty of things to do, attractions and places to go. For this guide, we talk about the city and the larger region of the same name to which it belongs. The reason being is the outskirt districts hold many delights to experience. So, let us start.

Guide To Izmir in Turkey

Izmir is safe to visit, but regardless of where you go in the world, do the same thing you would do at home, and do not lay yourself wide open to opportunity crime. So, only use licensed taxis, don't accept drinks from strangers, keep your money securely attached in a concealed wallet or purse, check the bill in restaurants, and always let someone know where you are.

2: How Many Days Should I Spend in Izmir?

To see the main city centre sights, spend two days in Izmir, but we recommend extending your stay to four or five days because there is so much more to see and do. In addition, by visiting the other sites of interest and outskirt villages, visitors genuinely understand this part of Turkey's demographics and social society.

3: What is Izmir known for?

At one time, people throughout Turkey always used to say the pretty girls came from Izmir. We do not hear that saying much these days, but it has kept a reputation as the most westernised place in Turkey for decades. Additionally, although it has a varied timeline, it is mainly known for the great fire of Smyrna in 1922 that ripped through the heart of the city and destroyed many buildings. After the Turkish war of independence, the Turkish government changed its name from Smyrna to Izmir.

The main international airport is Adnan Menderes, and the transfer time to the city centre is just 30 minutes. If busing from other areas in Turkey, like Istanbul, the last point is the main otogar and from there, catch connecting buses to many other destinations in Izmir. Izmir's road infrastructure is excellent, so car drivers have many options. Izmir has two train stations; Alsancak and Basmane. They run services to and from Istanbul, Denizli, Aydin and Ankara. If arriving via cruise line, you will dock into the Alsancak seaport. 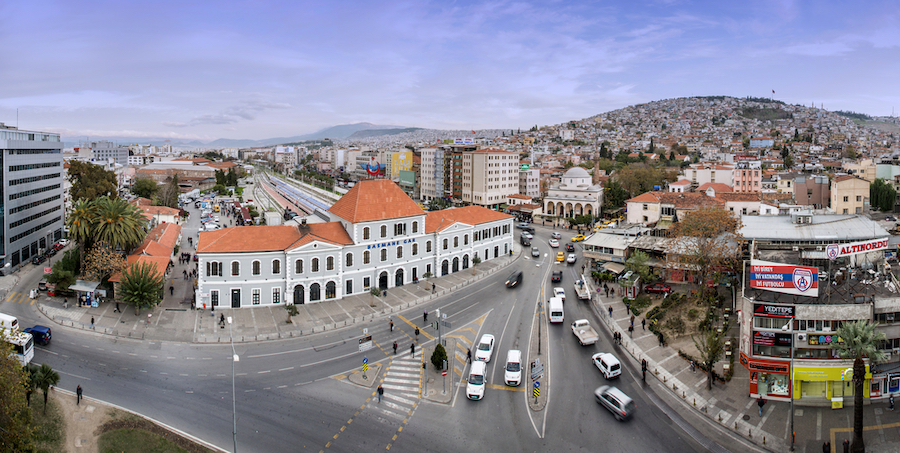 5: When is the Best Time to Visit?

Aside from February and March, which tends to be the rainy seasons, visitors can expect a good weather climate. If you like exploring and seeing attractions, visit between April and June or October to January. From July to the end of September, temperatures start increasing and peak at around 40 degrees. This is the ideal time to relax on the beaches or around the swimming pool.

6: How Do You Get Around Izmir?

Izmir has an excellent transport network. Small minibuses travel around the suburbs, while large buses from the central bus station (otogar) go to other places in the region. In addition, yellow Taxis sit on the corner of most major roads. Izmir locals love to use the ferries between Goztepe, Pasaport, Alsancak, Bayrakli, Bostanli, Konak, Karsiyaka and Uckuyular. There is also a metro line and the rent a bicycle system run by the local council called Bisim.

7: Nightlife and Dining Out

Get ready for a fantastic selection of restaurants and places to party. The nightlife centre in Alsancak, is home to many pubs, bars, and clubs. Likewise, many restaurants serving various cuisines from around the world sit around the city centre and in smaller holiday resorts. A must do is head to the Kordon area. Sitting by the sea, this is where locals go when they want to eat fish in traditional Turkish style. Start your meal with a selection of mezes (appetisers) before moving onto the main course. Locals of Izmir love seabream and sea bass, but restaurants serve many fish and seafood dishes. To be typically Turkish, drink a glass of Raki, the country's number one alcoholic drink.

8: Is Izmir Good for Shopping?

Naturally, as a large city, the shopping scene is impressive. First-time visitors to Turkey should head to a local, weekly farmers market for fruit and veg and to experience the cultural aspect. Otherwise, Izmir also steps up to the podium with a marvellous range of shopping malls. Forum Bornova and Optimum enjoy a high profile among shoppers who flock for a wide range of international and Turkish high street brands. Choose from many others, but we also take a trip to Kemeralti, the historic shopping district. After shopping for souvenirs, take a moment to soak up the nostalgic vibes of eras gone by. 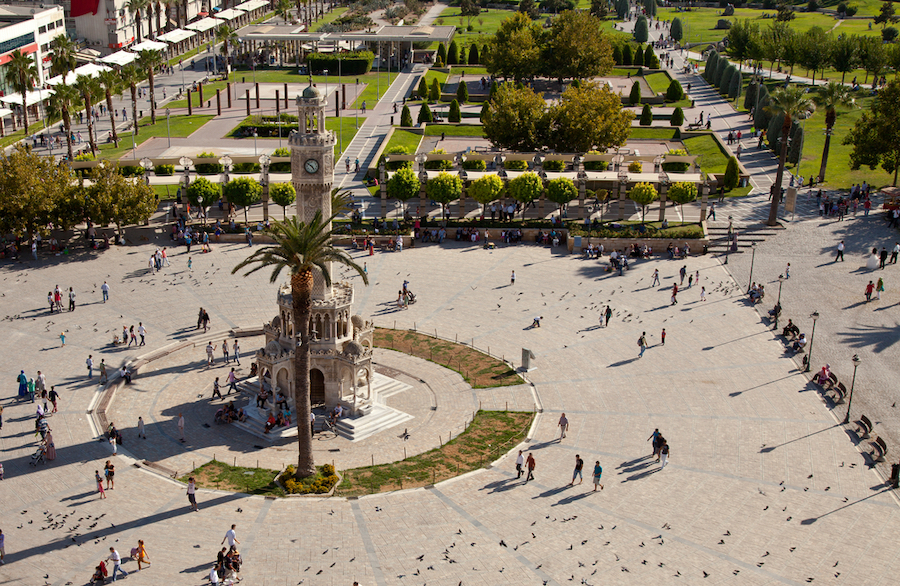 Altogether 30 districts make up the larger Izmir province. Some are more populated than others and earn fame for a specific reason. The most prominent include…

Seljuk: Sitting in the outskirt region, Seljuk is home to the famous ancient city of Ephesus, one of Turkey's top visited attractions. Another reason tourists go there is to visit the Virgin Mary's house and see Saint John of Basilica. Ephesus was one of the Seven Churches of Revelation mentioned in the New Testament of the Bible.

Seferihisar: The town within this district belongs to the Cittaslow movement, a global organisation promoting slow and natural living. Seferihisar also earns fame within Turkey for its citrus production, namely tangerines and satsumas. Although few foreign tourists go there, it is a popular tourist resort for Turks, many of whom book into bed and breakfast establishments throughout the region.

Tire: Once again, few foreigners visit Tire, but Turks often see the old historical quarter and shop in the Tuesday and Friday market. Stalls selling traditional handicraft items draw in locals from all around Izmir, and they are a popular daytime excursion. Additionally, Tire makes a roaring trade in agriculture.

Konak: This district, often referred to as the beating heart of Izmir, is also the old historical part. Everybody should start their trip here by exploring the prominent landmarks of the Kemeralti bazaar and the famous Izmir clock tower in the middle of Konak square. Other attractions include the agora ruins of old Smyrna and the Asanor lift, of which the restaurant at the top gives off incredible views of the city and surrounding coastline.

Cesme: Sitting side by side with Alacati, both these towns are vital tourism destinations for Turks. Many wealthy Turks have also bought holiday homes or retirement homes in the area. In addition, this district earns fame for its windsurfing potential and the old, traditional Izmir houses, many of which have been restored to their former glory.

Bornova: Residents here are mainly of the younger generations since there is a large university. Additionally, Bornova university hospital is well known throughout Turkey as one of the best, not only in the country but in the world. While visiting, look at the old Levantine mansions of Izmir, known for their architectural value.

Bergama: This district does a roaring trade in tourism, thanks to the local ruins of Pergamon. This ancient city was where parchment paper was invented and home to the world's first mental hospital. The book of revelation famously called Pergamon, one of the revelation churches, the seat of Satan. The throne refers to the altar, now in the Berlin Museum.

Balcova: This district has three major claims to fame. Firstly, Balcova is home to three prominent shopping malls. Second, medical tourism is booming thanks to the famous Balcova spa waters. Lastly, Balcova cable car brings in tourists from all around who want to see the fantastic views across the district. 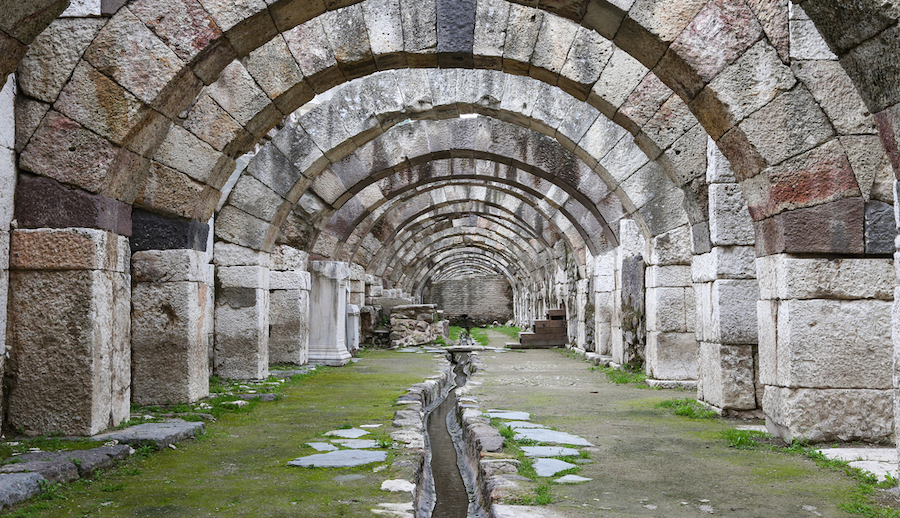 10: Other Things to do in Izmir

As well as visiting the places mentioned above like Konak and Ephesus, a host of other attractions await tourists. If historical sites and attractions interest you, buy the Aegean Museum card available online from the official website. This covers all museums and historical sites within the Izmir, Aydin and Denizli areas. It lasts seven days and allows you to beat the queues. See the full complete list of things to do here; otherwise, add the following to your list.

Izmir Agora Ruins: Originally built in the 4th century BC, Roman emperor Marcus Aurelias ordered the reconstruction of Izmir Agora after an earthquake in 178 AD. Excavations started in 1933, and sites to see include a basilica, ancient street, and an ottoman era graveyard.

Kadifekale: Built in the 3rd century BC, this hilltop fortress was where the martyrdom of Saint Polycarp took place. These days, visitors head for the fantastic panoramic view of Izmir city and the coastline. However, the steep hill makes for unbearable walking, especially in the height of summer, so we recommend getting a taxi up.

Izmir Wild Life Park: You do not have to be a kid to enjoy this. Izmir Wild Life Park is home to various species, including giraffes, hippos, monkeys, lions, cheetahs, and the reptile section features sakes, crocodiles and more. Take a slow walk around, then relax in the onsite restaurants with a view of the lake to feed the ducks.

Best Cities in Turkey: Izmir is Turkey's third-largest city, but there is a wide range of other urban landscapes to explore. This article discusses other cities, the reasons they stand out, attractions, shopping, and nightlife scenes.

Beautiful Places in Turkey: So, after exploring Izmir city and the surrounding district, you might be hampering after some landscapes of natural beauty, in which case Turkey is a nature lovers paradise. This article talks about the 15 prettiest places in Turkey that should be on everyone's bucket list and are the perfect place to visit after seeing the attractions mentioned in this Izmir guide. 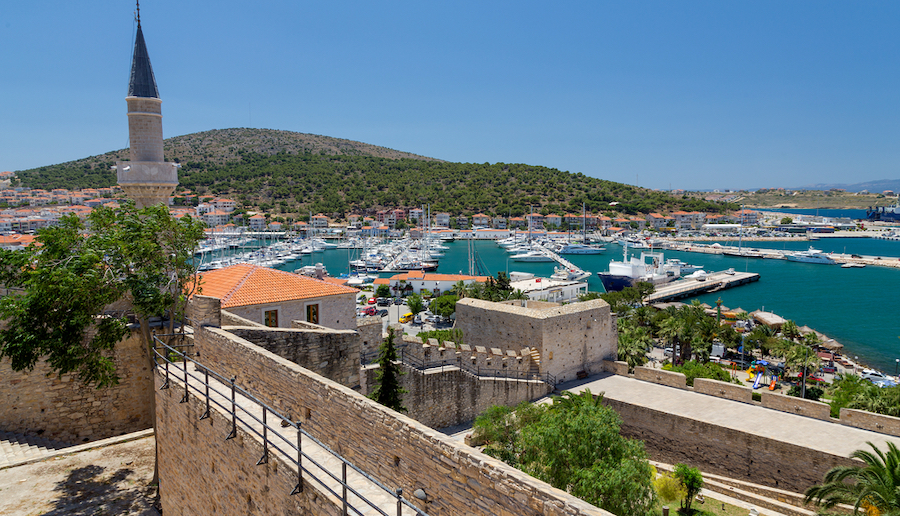