Divided heart of a city: the beautiful Bosphorus

“Is there another like Istanbul? I’m sitting at my desk on one continent and watching the judas trees bloom on another.” Asked to sum up Istanbul in a one or two words, many visitors would agree with Turkish poet Edip Cansever’s sentiments, although they might be a little more succinct and simply say “the Bosphorus”. After all, how many cities can you think of that are divided by a sea?

The Bosphorus not only divides a city, but a continent, too, separating east from west; Europe from Asia. It’s an important shipping route, a commuter travel route, and an enduring point of interest for locals and visitors, some of whom fall in love and start the search for sea view Bosphorus property. 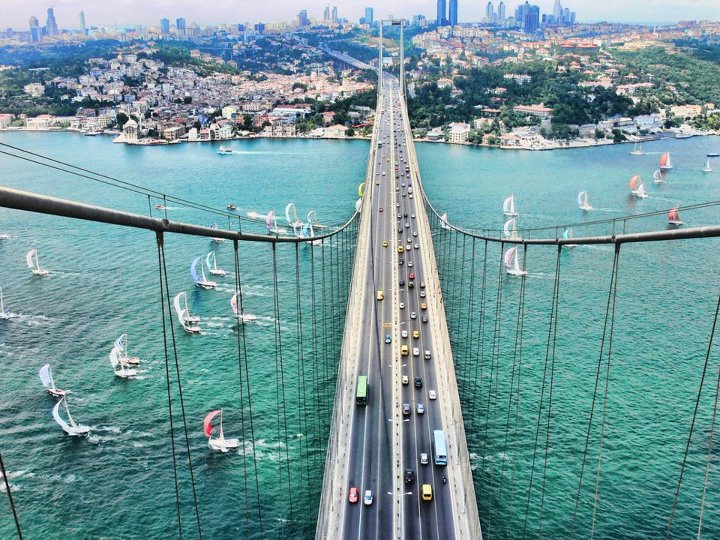 Unsurprisingly, as home to three empires and thousands of years of settlement, the Bosphorus is steeped in history, and cloaked in mythology. The Argonauts’ fleet of fifty ships sailed along the strait in pursuit of the Golden Fleece - Heracles and Orpheus rowing alongside. A cow, chased by Zeus, swam from Ortakoy to Beylerbeyi in an attempt to escape the fly sent by Zeus’s jealous wife, Hera.

Less fanciful but by no means fact, we’re told that in 530BC Darius the Great of Persia tied pontoons together to form a wooden road, upon which 200,000 soldiers marched from Asia to Europe to invade Greece. And then there was the 21-year-old Mehmed the Conqueror, who used the Bosphorus to great advantage during the siege and subsequent fall of Constantinople. 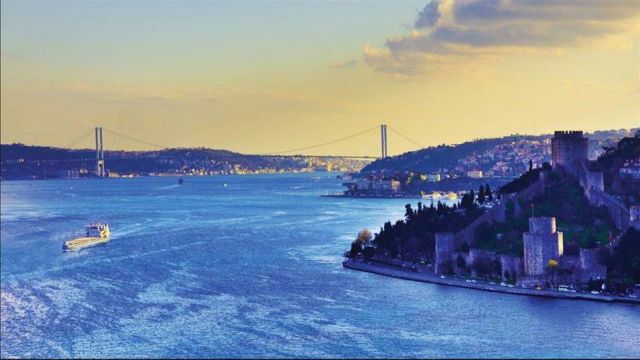 Modern life on the Bosphorus

These days, the famous strait is a more sedate place than during the wars and woes that history wrought on the city. Each side is lined with parks, orchards and points of interest, and at the weekends throngs of visitors and locals stroll and cycle along the leafy streets, gazing at the wooden mansions and out at the boats bobbing on the water.

As well as hosting a huge number of traditional seafood restaurants, the strait is full of mobile eateries that traverse the waters, docking occasionally to serve up seafood treats. Most of the fish that are pulled out of the waters are migratory fish, on their way to their Aegean spawning grounds, or to the cooler Black Sea: hamsi, loufer and bonito. Once upon a time there were around fifty fisheries on the Bosphorus. 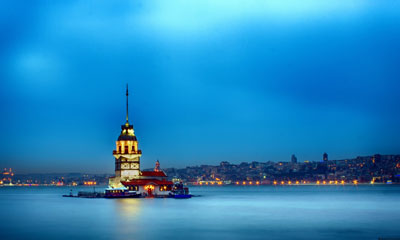 It may sound strange - since the Bosphorus is a feature of a large city - but the strait is also home to a number of orchards, growing fruit and vegetables for the city citizens and for export. Cegelkoy, for instance, is best known for its cucumbers, while Beykoz is famed for its walnuts (“koz” means walnut, while “bey” means lord”). In Arnavutkoy, strawberries are grown. Admittedly, although they smell sweet, they’re grey and small; not the prettiest or sweetest berries, but perfectly palatable eaten with icing sugar, like the locals do. 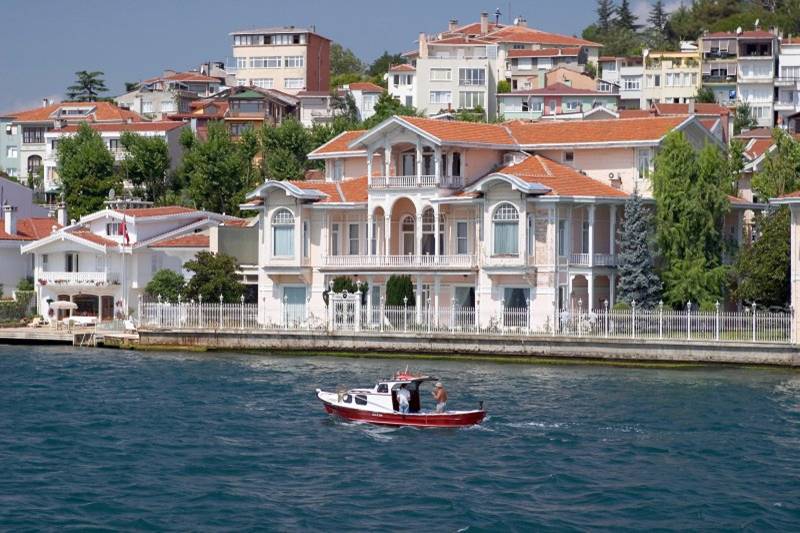 Many hundreds of beautiful Ottoman mansions once lined the waterfront, but fire claimed a great deal, now there are just over six hundred. Now, many have been converted into hotels or restaurants, or snapped up and restored to former glory by wealthy owners. Some are abandoned to dust and ghosts. A few more are for sale. Bosphorus property for sale is not surprisingly some of the most expensive and glamourous in the country. 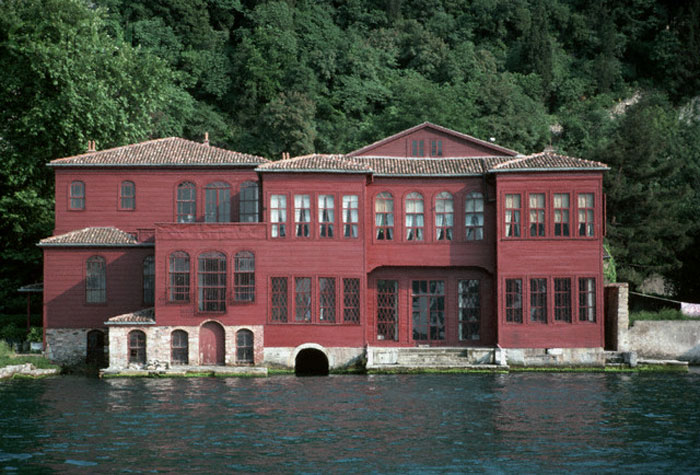 The summer homes of the rich and famous during the Ottoman era, each yali was generally built according to the characteristics of its unique location, and each had its own finely worked wooden detail. Some date back to the eighteenth century, and the last were built in the early nineteenth century. The oldest surviving yali is the Amcazade Koprulu Huseyin Pasha, which was built in 1699 in Beykoz. The oldest on the European side is the Serifler Yali, in Sariyer, while the most expensive is Erbilgin Yali, in Yenikoy. A few years ago, Erbilgin Yali was sold for at 100 million Euros, making it the fifth most expensive house in the world.

If you'd like to join the ranks of people who have owned property in this most prestigious of locations, check out some of the following Bosphorus sea view properties:

$390,000
1
1
Istanbul
With a stunning location and an attractive price, this modern Bosphorus apartment in the heart of Istanbul's Galata district is the ideal city pad - just ask the many visitors who have stayed here.

Just a stone's throw from the Galata Tower, the lovely apartment is surrounded by excellent restaurants, cute boutiques and rooftop bars. A short walk takes you to Istiklal Avenue, the city's most famous shopping street. It's little wonder why the property has a year-round occupancy rate, rented out at $160 per night.

$234,400
2
2
Istanbul
These spacious, luxurious apartments in Fikirtepe in Kadikoy look out over the Bosphorus. They're conveniently placed near a major transport hub, which takes residents to the European side, to the new financial centre in Atasehir or further afield around the city and beyond.

The large project consists of four towers. Most of the apartments have sea views; all have access to the top facilities: pools, gymnasium, shops and concierge service. Infrastructure has been poured into the area, which means it's ideal for young families, or working professionals seeking all the trappings of a modern city lifestyle at a decent price.

$1,400,000
3
3
Istanbul
These elegant, modern villas have been built on a huge plot, affording each owner the privacy and pleasure you'd expect from an elite city residence. The interior is open and modern and extremely comfortable, providing plenty of living space for each occupant with its three huge bedrooms and large living areas.

Close to the shoreline and just twenty minutes from Taksim Square, these villas afford a chance for owners to enjoy the best the city has to offer. The complex has top facilities including tennis courts and a wellness centre. Tarabya is near Sariyer, and has a reputation as an upmarket, family-friendly location.

$4,000,000
5
8
Istanbul
This large family home has all the bells and whistles: five bedrooms, eight bathrooms and large, open living areas. And of course, that amazing view of the Bosphorus. It's built on a large 1750 square metre plot, affording plenty of privacy and space with trees and a mature garden. A solar and wind energy system means the property is efficient to run, as well as environmentally friendly.

$17,000,000
10
6
Istanbul
With a £13m price tag, it comes as little surprise to hear that this Emirgan Mansion is one of the city's most incredible. The sumptuous, four-storey mansion has an annex, a library decked out in mahogany, an elevator, an indoor pool and an impressive ten bedrooms - each decked out to the most luxurious of standards, naturally. And as you'd expect for a multi-million pound property in Istanbul, it has all the sea views you could wish for.