In a place as busy as Bodrum, restaurants tend to come and go. However, these eateries have withstood the test of time and quality, and are thriving thanks to their popularity with locals and visitors. Marie Coggin, who lives in Gumusluk, visits some of the best. 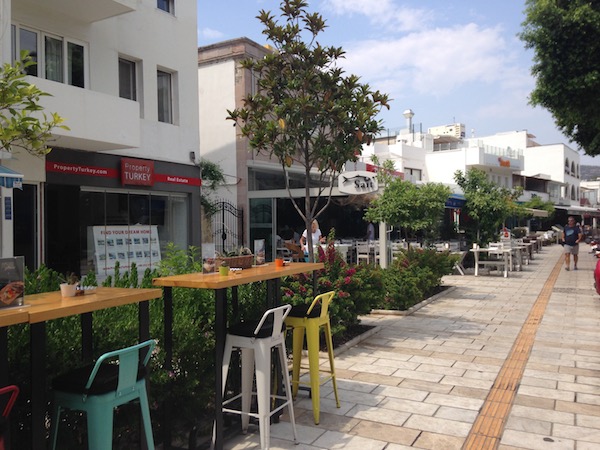 This well established restaurant has shifted a little way down the seafront to the more showy setting of the Yalikavak Palmarina. Famous for its fish, it scores consistently high on the quality of its food as well as continuing to enjoy a reputation for being expensive or, in the opinion of some, way overpriced.

One Yalikavak resident told me Sait is a venue to indulge a generous company expenses account and confirmed she used to take her more important clients here. Sait now has a second restaurant, in central Bodrum, where diners can enjoy their food overlooking the Marina opposite or alternatively take in the majestic views of Property Turkey, home to our Bodrum team, as can be seen in the photograph above. 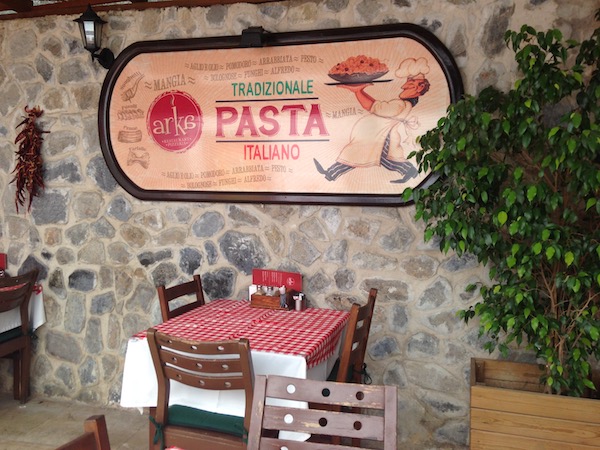 Nestling in a charming passageway which provides a shortcut between Ataturk Caddesi and the Kule Rock City Bar on Bodrum’s Bar Street, Arka is a popular haunt for locals and tourists alike, and an opportunity to savour authentic Italian cuisine.

The pizzas are very popular as are the pasta dishes, which can be washed down with their reasonably priced wines. There never seems to be a bad word spoken about Arka (excepting some gripes about the music being a little loud on occasions but they will turn it down on request!) and comments include 'nice owners and waiters alike'. The alluring aroma of basil (a surprisingly little used herb in Turkey) and garlic makes it difficult to pass by; it is hard to resist the urge to satiate ones tantalised taste buds and not pull up a chair. 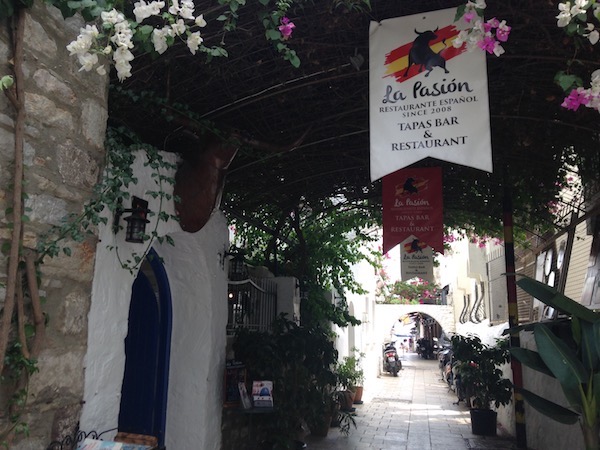 La Pasion is an old favourite on the Bodrum scene and is still going strong, with the same chef and owner, Neco, since its inception in 2008. The restaurant is a magical venue that's rather tucked away, sheltered in the alleyway running parallel to the one where you’ll find Arka.

The eatery is a winter favourite with locals, offering an excellent set lunch menu at fabulous prices. Four of us enjoyed a fabulous three-course lunch for 35 TL per head and each of us thoroughly enjoyed it and would highly recommend it.

La Pasion markets itself as a Spanish restaurant and although it does offer Spanish favourites such as paella and tapas the cuisine might be best described as European. It appears to divide opinion – I've heard some complaints suggesting that portion sizes are perfect for those on a 'get slim quick' diet - but it's still a fabulous spot to escape from the bustle of busy Bar Street if only to drop in for a beer or glass of wine in the secluded retreat of their courtyard garden. 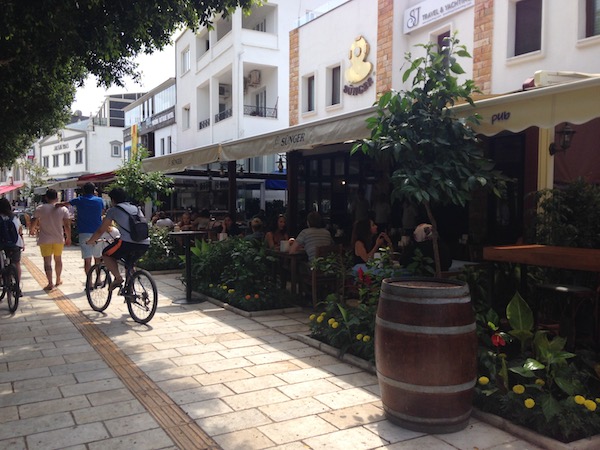 Sunger is said to be the oldest established restaurant in Bodrum with an large menu offering pizzas (for which they're probably most famous) to local Turkish specialities such as Cokertme Kebab. Sunger has a bistro feel about it with an extensive bistro type menu to match. Their biggest plus with locals is consistency. As someone remarked, having paid a recent visit 'the pizza was exactly the same as it was 18 years ago'.

Locals have also commented that the staff have 'been there for years': always a useful yardstick with which to measure the reputation of a restaurant for customers. It seems that contented restaurant staff usually result in satisfied customers. 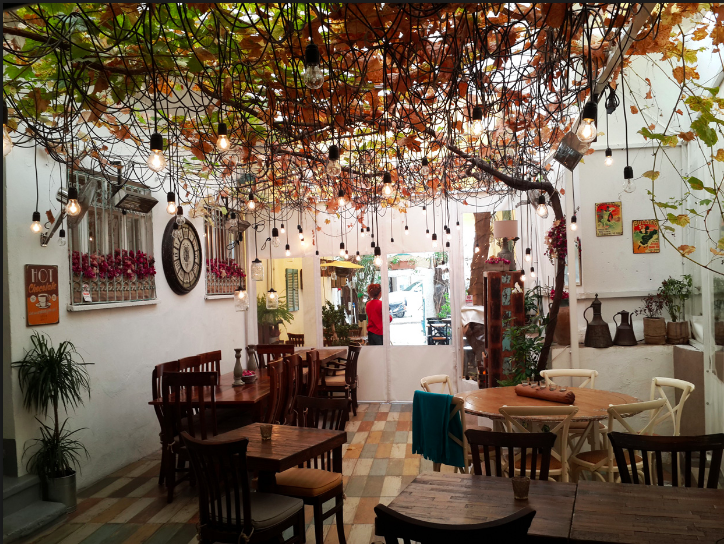 Sugar and Salt is a relative newcomer to the scene, having opened about three years ago. However, the restaurant seems to go from strength to strength. With a varied menu, comprising European cuisine and traditional Turkish fare, it is also a perennial locals' favourite with its well-priced set menus both in-season as well as out-of-season and is earning consistently favourable reviews. 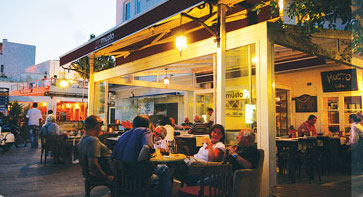 Mustos, which enjoys a sea front Marina view is another old friend that enjoys a consistently good press and gains special praise for its home-made burgers.

Gumusluk has long been renowned for its waterside fish restaurants but these days it is wealthy Istanbullus with villas in Turkey's favourite holiday spot and tourists who are their main customers, and most do not remain open in the winter. Prices are considered to be prohibitive by locals, but seafood and shellfish have never come cheap in European eateries; favourable exchange rates enable foreign visitors, and wealthy Turks, to treat themselves to fresh seafood in idyllic surroundings that are associated with and typical of Gumusluk. 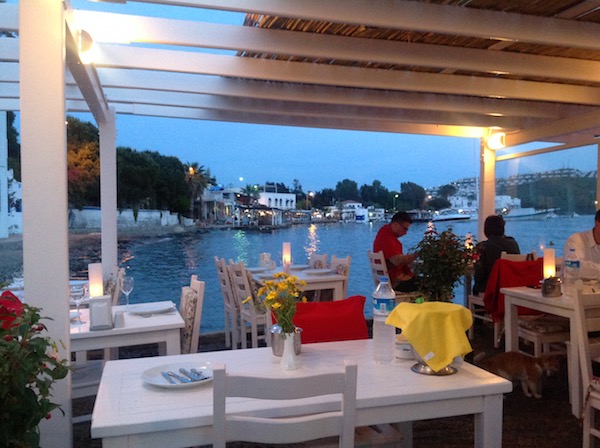 Gumuscafe is one of the established waterfront restaurants run by the worldly and friendly host, Necati, who is always well worth a chat with. Necati can be spotted each spring with roller brush in hand giving everything a fresh coat of paint after the winter ravages have taken their toll.

Comprising a traditional stone house (it used to be the village bakery and still retains its original oven) on the waterfront, with a pier extending into the sea for diners this is one of the more traditional restaurants on the seafront, serving delicious seafood such as kalamar, cupra, levrek and dil (Calamari, Sea Bream, Sea Bass and Sole).

Happily, Necati has a reputation for advising against over-ordering, unlike some of the others who might encourage the opposite. You won't find 'bargain basement' prices but you will find an amazing, romantic setting eating right on the water. To reach Gumuscafe, you will have to navigate the other fish restaurants to get there (right past the barbers with possibly the best view in the world!) each one of which will be vying for your custom. Fobbing them off nicely with 'sonra!' Turkish for 'later' appears to do the trick in fending them off. 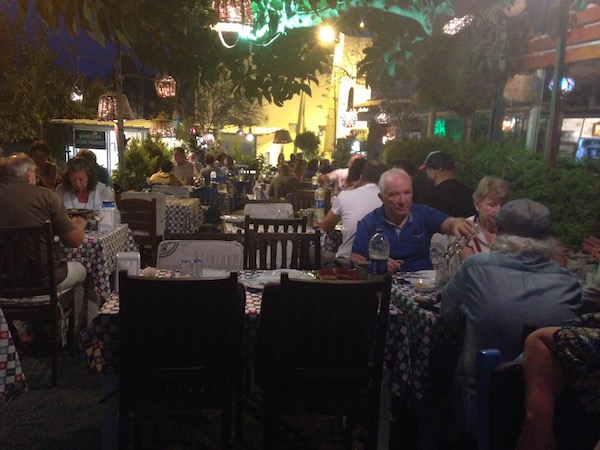 Many of the locals tend to opt for the Gumusluk Balik Evi situated next door to the ever-popular Mars Cafe at the top of the main car park. Six or seven years ago, this former rather shabby looking fishmongers (balikci) decided to reinvent itself as a restaurant and went through a complete refurbishment and extension to become a 'balik evi' (fish house) run by the former fishmonger, Hasan.

These are traditional establishments, found all over the peninsula, where one chooses ones fish, the balik evi weighs it and charges a standard fee for the cooking of it. In this instance, the restaurant and fishmonger are part of the same business but this is not always the case. Locals pondered whether there was room for yet another fish restaurant, especially one that didn't enjoy a waterfront location or a sea view.

However, it has stood the test of time and is one of the few to remain open even during the winter months when it is still necessary to make a reservation most nights of the week. This has become a clear favourite of the locals serving consistently good fish and mezeler (Turkish starters) and decently priced wine; they also now have a roof terrace which does enjoy sea views and it says a lot that they have recently had to procure an additional piece of land in order to extend their car park to cope with the demand. 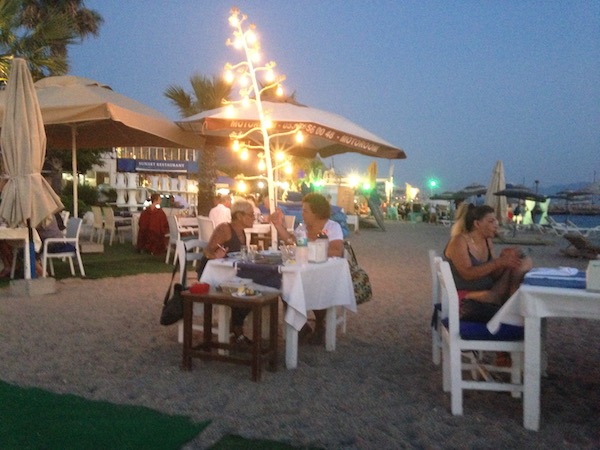 Turgutreis also has its share of balik evi type fish houses to be found down by the side of Migros opposite the Belediye but the name of Lapikant is one frequently spoken of when enquiring about the better places to eat here.

This restaurant has been established since 1992 and their maitre d, Askin, is a popular host enjoying a great reputation for his attentive service. With tables situated right on the beach, it's a fabulous place with a really extensive menu including the Lapikant Special (meat or chicken in their special curry-style flavoured sauce). Meals are served up with a flourish by one of their many enthusiastic waiters, complete with lavas bread with a herb butter (pictured) and other little meze accompaniments.

There seems to be something on the comprehensive menu for everybody besides the traditional Turkish dishes and the generously sized portions make it a popular haunt for locals as well as tourists alike. It is open in the winter and we have heard people rave about their steaks which appeared to be very reasonably priced.

Gone are the days when Bodrum restaurants served purely fish with salad. While Turkish food is considered to be one of the five or six seminal cuisines of the world, it is good to know, particularly for the people living here all year round, that the other seminal cuisines are also adequately catered for. Our apologies for any omissions, particularly some of the Chinese restaurants on the peninsula who also enjoy a great reputation. Next time!

Found in the most exclusive and prestigious spot of Bodrum, hidden amongst the windmills, are these incredible rare stone built properties in Bardakci Bay with tremendous views out towards the Castle and panoramic sea view.