Property Turkey Blog A guide to the Basilica Cistern in Istanbul

A guide to the Basilica Cistern in Istanbul

The Basilica Cistern, one of Istanbul’s most unusual tourist attractions, gains fame because of its underground location, and if you are visiting the Hagia Sophia, Blue Mosque, or Topkapi Palace, it is worth taking a short detour to see it. Called Yerebatan Sarayi in Turkish, which means sunken palace, it was built during the 6th century under Byzantine rule. The cistern is one of many in Istanbul but it is the largest, and to understand its vast size, some sources say 7,000 slaves built it.

Initially, a water supply system for the Byzantine empire in Constantinople, it also provided water to the Ottomans in Topkapi Palace, after they invaded in 1453. However, Islamic rule prefers flowing water rather than stagnant, and they made it redundant short after. Dutch traveller P.Gyllius rediscovered the underground cistern while following the trail of how locals get water, and once he saw its glory for himself, word spread to make it one of Turkey’s unique historical sites. 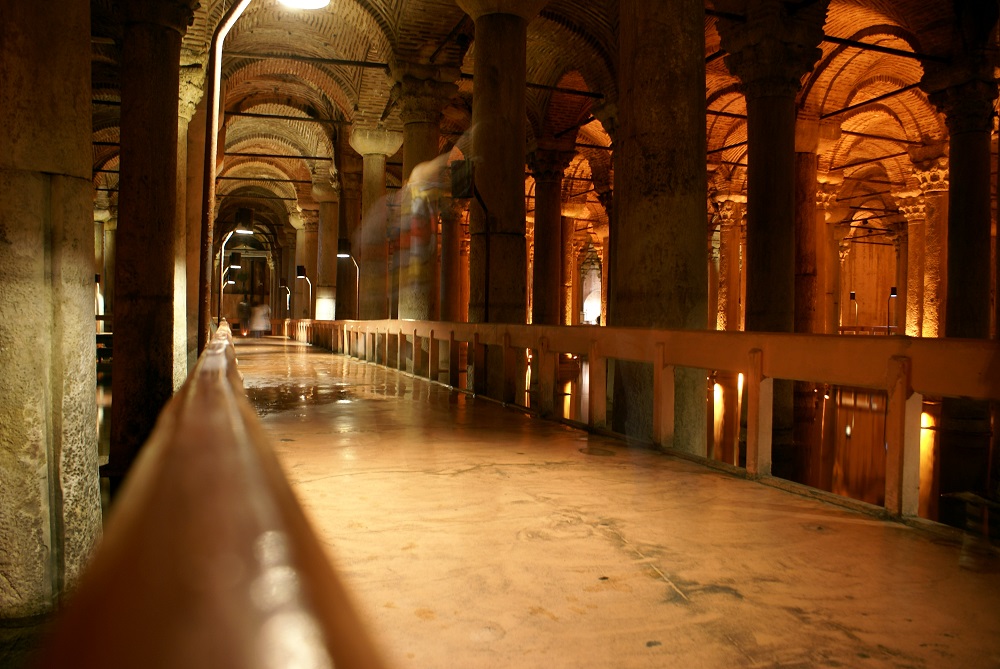 About the Basilica Cistern

Built by Roman Emperor Justinian, the cistern, also called the Basilica Palace measures 140 by 70 metres and covers 9,800 square metres. Amazingly, the water capacity is a massive 100,000 tons. Visitors descend a stone staircase of 52 steps to see for themselves the 336 columns, each of which is 9 metres high. These columns sit 4.80 metres apart and form 12 rows, each containing 28 columns. For visitors, purposely built walk-ways enable them to see the columns up close.

Most columns were constructed using material from other buildings, including marble, and are cylindrical. All but eight columns display their original features. The eight were in danger of breaking during renovations in the 1960s, hence were reinforced with concrete. Over the years, much care and love have been paid to the cistern with various repairs in the 18th and 19th centuries. In 1987 and 1994, it also closed for a short while, for mass cleaning and maintenance.

Two Medusa Heads sits in the northwest corner. Most say they are masterpieces of Roman sculpture art; and all agree they were not constructed for the cistern but taken from another landmark building. Historians say, their original use was as column bases, but many urban legends exist why one is upside down. If we remember Greek mythology, Medusa, previously Athena, could turn a man to stone by merely looking at them, so they suggest the upside position was a resemblance to avoid her eyes. 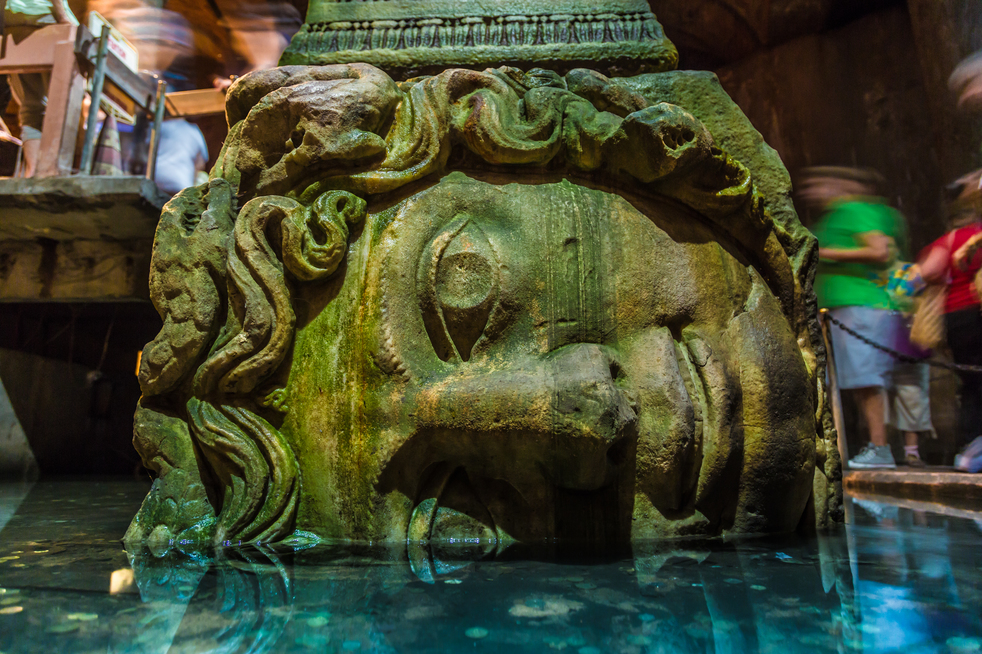 Such is the Basilica cistern’s notoriety; many books and films feature it in scenes. One famous film, From Russia with Love with James Bond showed him rowing a small boat before disappearing into a side door which led up to the Russian consulate. Readers might also recognise it from the Dan Brown’s novel Inferno, published in 2013. Mark Twain also visited the cistern in the 19th century, while touring and researching his book called The Innocents Abroad. While he was not impressed by other sites like the Hagia Sophia, the cistern wowed him, and he wrote.

“You are forty feet underground, amid a perfect wilderness of tall, slender, granite columns, of Byzantine architecture. Stand where you would, or change your position as often as you pleased, you were always a centre from which radiated a dozen long archways and colonnades that lost themselves in the distance and the sombre twilight.” 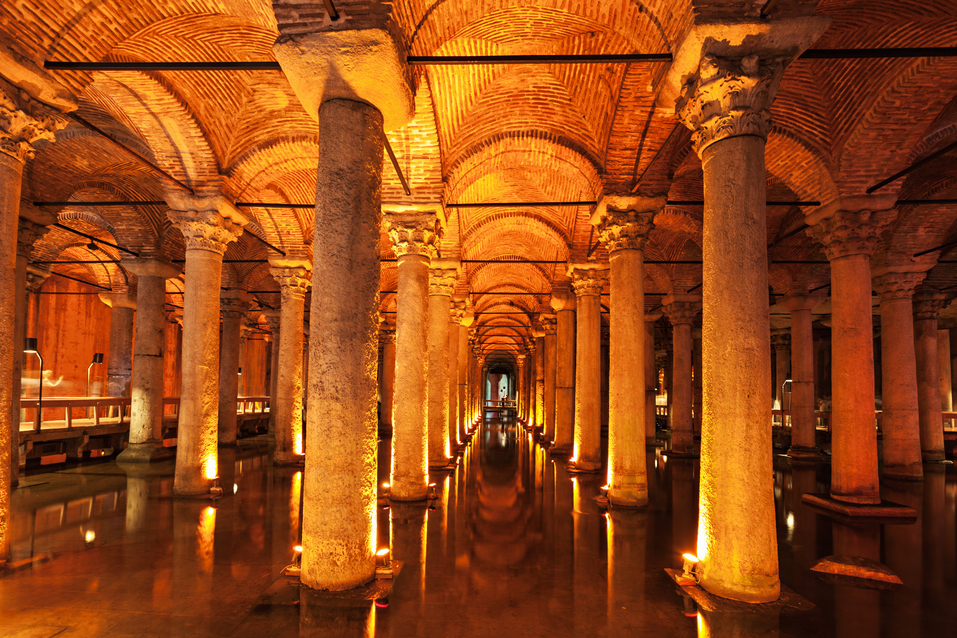 Additional Information: The official website is www.yerebatan.com, but it is information only, and they do not sell online tickets. Buy them at the entrance for 20 lira and make sure to go between 9 a.m. to 5.30 p.m. To get there, head to the old city Sultanahmet district. Turn right when coming out of the Hagia Sophia and walk around the corner onto the street with the same name.

What to do in Fatih: The cistern sits in the Fatih district that holds many other attractions to visit including authentic Turkish neighbourhoods, walking tours, mosques, palaces, churches and much more. This guide talks about the best sites to see and why they stand out.

Famous Buildings in Istanbul: If you want to see other famous buildings and landmarks while in this glorious city, this article will be of use. Listing 13 buildings dating from the Ottoman and Byzantine empires, they perfectly give a deep insight into the European and Asian history of Istanbul.