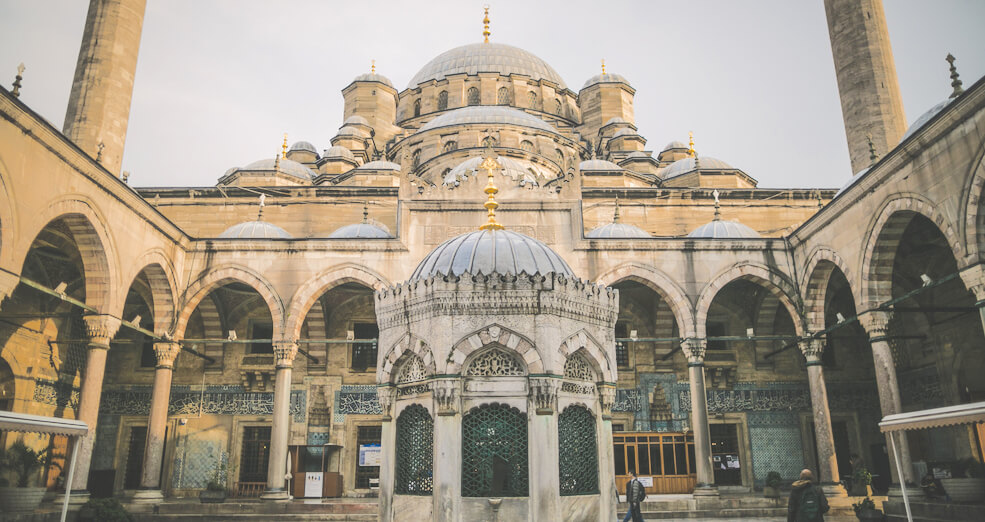 The Suleymaniye mosque and complex of Istanbul is one of the most magnificent sites in the grand city. Every minor detail, from a minaret to the interior design to the main sections, is enough to make you take notice. Sitting on Istanbul's third hill, these days, as well as being a popular tour attraction, the Mosque still operates as a place of worship. One notable aspect of this Mosque is that Mimar Sinan, the Ottoman empire's most treasured architect, built it. Any landmark with his name automatically earns iconic status thanks to his excellence for worthy masterpieces and enormous palaces. In addition, its location offers up fantastic views across the Golden Horn of Istanbul.

About Suleymaniye Mosque of Istanbul

Ottoman Sultan Suleyman, the Magnificent, ordered the construction of a Mosque in Istanbul in late 1549. Three thousand five hundred craftsmen worked tirelessly for seven years until his vision took shape as an iconic mosque in Istanbul. The Mosque was more than a place for Muslims to pray. As well as the prayer hall and courtyard, there were also four schools, bathhouses, and a hospital. The tavern was where travellers rested, and public kitchens served food to the hungry regardless of their faith.

The Mosque and complex suffered much damage over the years. In 1659 fire destroyed the landmark, but Sultan Mehmed IV issued orders for restoration. In 1766 the dome partially collapsed in an earthquake, but much-needed renovations were only carried out in the 19th century. In World War I, fire engulfed the Mosque whilst weapons were stored in the yard, hence the explosion. Again in 1956, the Mosque underwent restoration and extensive refurbishments.

Walk along a street lined with tiny houses serving tea to reach the end of the alley and entrance to the Mosque. The first sight is immaculate and beautiful gardens. Next, walk past the washing facilities to reach the courtyard with a water spring in the centre, where worshippers wash. Inside the Mosque, visitors gasp at the vast proportions, fifty-nine metres long and fifty-eight metres wide.

The central dome is fifty-three metres high, with cleverly disguised supporting pillars. Two hundred coloured windows with light shining through accentuate the minimal décor. There are two mausoleums at the back of the Mosque and a graveyard, including the expertly renovated tombs of Sultan Suleyman I and his wife. In front and just behind the perimeter is the tomb of architect Sinan. Unfortunately, you cannot see this.

There is a restaurant which used to be the shared kitchen on the perimeter of the Mosque. Besides the restaurant, in the trees is an area of ground sunk and turned into a cafe; the decor is not great, but the peaceful gardens offer shelter and drinks away from the mid-day heat. The Mosque is open daily from 9 a.m. until 5.30 p.m. During prayer time, tourists cannot enter. Entrance to the Mosque is free, and donations are welcomed.

Naturally, as a place of worship, visitors should adhere to social protocol regarding mosques. Men should wear trousers and a shirt, while women should cover their legs and arms and wear a headscarf. Do not take any food or drink inside the Mosque, and maintain silence, especially if you encounter someone in prayer. Always take your shoes off at the door. There usually is a designated place to leave them. Also, be aware of Muslims at the washing fountains since they will be preparing to go into the Mosque.

More about Mosques and Istanbul

Famous Mosques in Turkey: Many old mosques top the list of iconic landmarks in Turkey, and if the history and the architecture of Mimar Sinan interest you, this article lists famous Islamic and Ottoman empire places of worship to visit, from more mosques in Istanbul to further afield. Famous mosques include more sites in Istanbul, like the Hagia Sophia and Blue Mosque, to other cities like Edirne and Bursa.

Famous Buildings in Istanbul: Of course, if you want to stay local to Istanbul, rather than explore further afield, this article talks about famous buildings and museums worth visiting for an intriguing insight into Istanbul's colourful history. Alongside the Ottoman Suleymaniye Mosque of Istanbul, they reflect the importance of this iconic city in Turkey.