When Turks head to the polls on June 24, it’ll be with less certainty than at any point over the last two decades. President Recep Tayyip Erdogan is facing a tough battle to consolidate his presidential power - and there’s a slim chance his AK Party could lose its majority altogether, according to a Bloomberg poll.

If the pro-Kurdish HDP party wins more than 10 percent of the vote - the threshold which allows a party to take seats in parliament - Erdogan’s AK Party risks losing its already slim majority. The AK Party has formed a “People’s Alliance” coalition with the Nationalist Movement Party, while the Muharren Ince-led Republican People’s Party (CHP), Iyi (Good) Party and Saadet (Felicity) Party have joined in a “Nation Alliance.”

The poll showed the AK party is set to win 46 percent of votes, and Nationalist Movement Party 4.8 percent - which puts Erdogan’s coalition at 50.8 percent majority. However, with a 3.5 percent margin of error, this leaves room for a surprise victory for the opposition party. 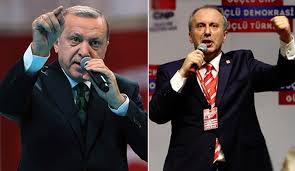 Erdogan himself polls a little better as president than his ruling party, and the Bloomberg survey indicated he will likely win the first round in the election with 51 percent of the votes. The vote will usher in an executive presidency, and will abolish the office of prime minister altogether. These new powers will represent the culmination of years of planning for Erdogan. If the polls are wrong, however, and Erdogan gains less than 50 percent of the votes, a second round vote will be held two weeks later between the two candidates with the next votes. If this scenario played out, it’s likely Erdogan’s lead would be more substantial.

Background to an election

A political shift In past elections, Erdogan’s AK party has had the staunch support of religious conservatives, free-market liberals, and nationalists. Now, there’s been a shift, with nationalists, middle-class and younger voters deserting their long-cherished party. To compound matters, the depreciating lira is a worry for Erdogan, whose previous wins have been helped along by the memory of his earlier economic successes.

Turkish voters consider the economy to be the most important issue, and Erdogan knows his perceived ability to deliver a better standard of living to Turks is what has kept in in power for so long. Combined with the erosion of his supporter base, the state of the economy was partly behind his call for snap elections, almost 18 months ahead of schedule, a move designed to set the opposition scrambling to get organised. But it might just backfire for Erdogan.

While he might still win the election, Erdogan’s long spell of power is coming to an end. 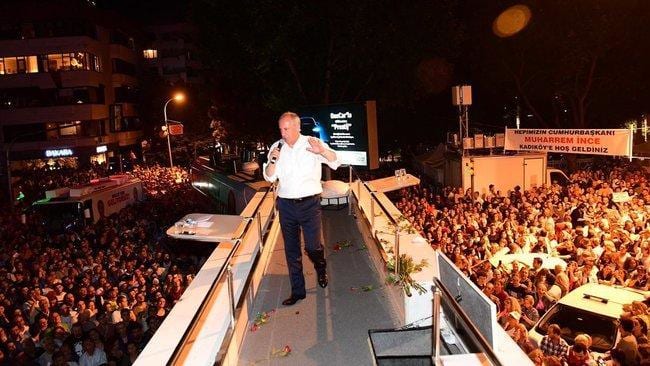 The secular politician and top contender against Erdogan is drawing large crowds in campaign rallies across Turkey, and his speeches are being shared widely on youtube. The 54-year-old secularist with 15 years of parliamentary experience under his belt is seen as a populist who can excite a crowd. His speeches lambast Erdogan’s penchant for the finer things in life - like his expensive new palace - and the president’s response to the failed coup of 2016. He also voices his concerns on the democratic processes in Turkey, and pushes for a more western-looking, secular approach, warning that Turkey is “breaking away from the modern world”.

A clear win for Erdogan’s AK Party will mean a rebounding lira, which is positive news for investors and property prices. However, Erdogan will need to secure economic gains to convince anyone wishing to invest in Turkey as to Turkey’s long-term investment potential.

If Ince’s coalition takes the majority, the government will swing towards more secularist policies and outlook. Turkey will likely see a short downswing while the dust settles, but in the long term, a win for Ince will mean better relationships between Turkey and Europe, a big positive for investors hoping to call Turkey home.