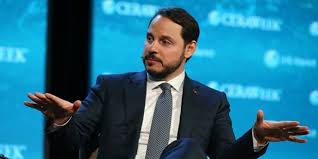 Thanks to a strong economic foundation, Turkey’s economic growth is set to continue, according to new finance minister Berat Albayrak.

Albayrak, who is President Erdogan’s son-in-law, made the remarks late last week, addressing concerns about the Central Bank’s ability to rein in inflation. It’s thought that the minister’s comments mean Erdogan, a longtime opposition of interest rate hikes, is looking to exercise greater influence over monetary policy.

The Lira has lost a fifth of its value this year, partly due to concerns about the Central Bank’s inability to temper the double-digit inflation.

Albayrak’s statement was made from Argentina, where he’s attending a G-20 meeting. He said the government’s recent policies were aimed at maintaining fiscal policies, seeing healthy credit growth, and implementing and carrying out the structural reforms required for a healthy economy. “Turkey’s economy continues its strong growth momentum. Our economic foundations are going to be strong and our outlook is promising,” Albayrak said.

After the June 24 election, Erdogan merged the Treasury and Finance Ministry, and Albayrak’s appointment saw him usurp Mehmet Simsek and Naci Agbal. This is why any comment he makes is being closely watched by investors, who are waiting to see whether the new minister will follow his father-in-law’s stance that high interest rates mean high inflation, or revert to a more conservative monetary policy.

So far, all Albayrak has said is that the Central Bank is independent, and will do whatever economic realities and market conditions dictate. Erdogan has also sought to assuage any investor fears in the preceding weeks.

“Turkey is on the right track. Our investments are obvious. The fact that international [finance] institutions and creditors grant loans to those who invest in Turkey is a clear indication of it,” he said earlier in the month.

Property Turkey director Cameron Deggin believes any doubt is due to the markets “resettling” after the snap election. “Like any economy, Turkey, home to a diverse number of industries, is subject to daily, monthly fluctuations,” he says.

“There is a lot of work to do, tackling inflation and a low lira, but the bedrock of the economy is stable, which continues to attract investors looking beyond the short term.”

Deggin says increasing numbers of investors continue to seek out apartments in Istanbul, and villas in Turkey's southern regions.

With access to a private yacht marina, these luxury properties are located right at the seafront in Buyukcekmece with outstanding open sea views and access to hotel services. Listed for sale at first call prices for investors.