Turkey has been sending plane loads of protective equipment to the United Kingdom and other countries to help frontline health workers.

The Turkish government answered a call for help after the British National Health Service told of the enormous difficulty of obtaining enough protective kit for its medics.

The items were packed in boxes displaying the words of 13th century Sufi poet Jalaluddin Rumi: "After hopelessness, there is so much hope, and after darkness, there is the much brighter sun".

Over the last few weeks Turkey has also donated medical supplies to hard-hit Italy and Spain, as well as five Balkan countries. 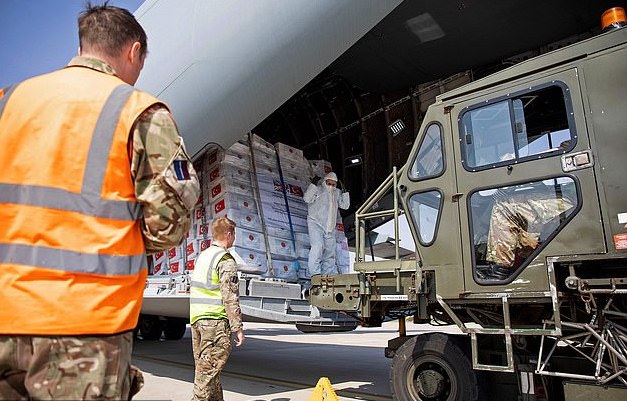 Raab said Turkey's answer to their call for help was an "indication of strong friendship between the two countries."

The UK government had also appealed to British manufacturers to produce supplies for frontline medical staff, and while some companies had answered the call it was taking time to begin production.

Germany has also stepped up, with the German army supplying 60 mobile ventilator units. The NHS is reported to have about 10,000 ventilators, short of the 18,000 which the British Health Secretary Matt Hancock has said is the minimum required to tackle the peak of coronavirus cases.

On Friday, British media reported that the shortage meant that NHS doctors and nurses had been asked to work without protective gowns if these ran out.

New advice recommends using a plastic apron with coveralls, should gowns run out. On Saturday, unions and professional bodies said NHS staff might refuse to work if there wasn't enough PPE to stay safe.