'Time to invest in Turkey', says US investment guru 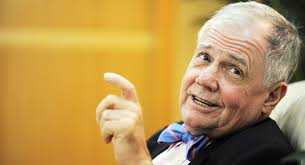 One of the best known investment gurus says investing in Turkey is a smart move.

Jim Rogers, who co-founded the Quantum Fund in the 1970s and is currently the CEO of Rogers Holdings, said on Wednesday that the Turkish-US spat is "madness" and instead the US should invest in Turkey.

"It is madness. I have no idea why America is doing this. Turkey has been a long-term ally of the U.S. and NATO. In my view, it is hurting America in the long run," the investment expert said. "And we will hurt ourselves more than we hurt anyone."

Turkey and the US are experiencing a rift, thanks to Washington slapping sanctions on Ankara following the detention of a US pastor in Turkey over terrorism charges.

Investing in Turkey is 'smart'

Rogers pointed out that the current climate could prove beneficial for shrewd investors. "When something like this happens you take advantage of it by buying. It's usually an opportunity to buy things. If you are smart enough to do it, it comes out very well, two years, five years later."

He added that he was considering dipping a toe into the waters himself. "I would probably be buying Turkish assets now. Normally smart people are buying now."

As economic power shifted away from the West to emerging economies like China, India and Turkey, Rogers said it was time for the US to strengthen ties, not jeopardise trade agreements.

Investors continue to look to Turkey

Two weeks ago we reported that enquiries to Property Turkey's website hit an all-time high as the lira plunged and investors sought to reap huge discounts and invest in Turkey. As the lira regains a little ground, enquiries remain steady.

"The only way is up," Property Turkey director Cameron Deggin said. "We've seen the economy make dips and dives, but the overall trajectory is up. Investors know this and are taking advantage of the current situation, with the expectation that in two or three years they will make enormous gains."

Turkey's banks are under pressure to curb inflation as they look to refinance $77 billion of foreign currency-denominated bonds and loans. Inflation is up to 18 percent, the highest level since 2003. This will have repercussions for everyday goods and services. E