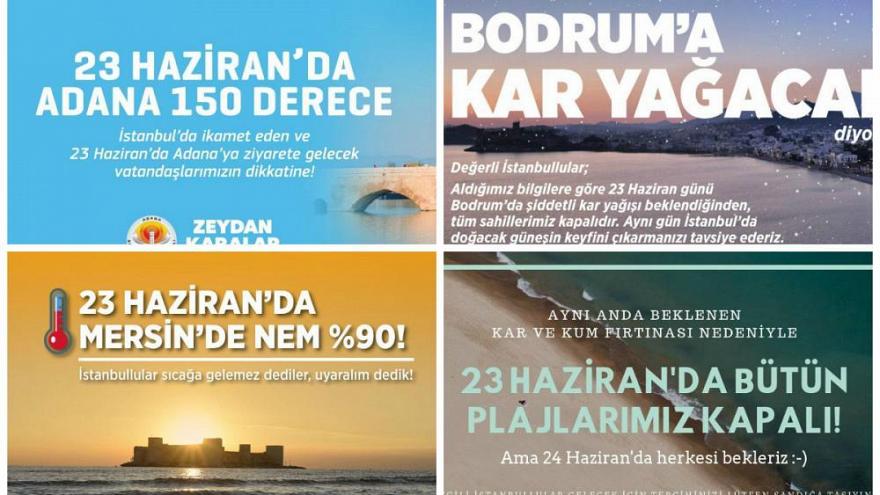 Turkey's city dwellers are being urged to eschew holidays to stay home and vote.

Knowing that whoever holds Istanbul generally goes on to lead the country, Erdogan refused to accept the defeat, lobbying successfully for a new election on June 23.

Now, several municipalities around Turkey have taken to social media, urging people living in the city to not take their holidays in June, but to stay and vote.

Coastal cities, the destination for city dwellers taking holidays, kicked off the campaign on Twitter. They used a few techniques to dissuade voters from holidaying on June 23.

Adana's mayor, Zeydan Karalar, from the National Alliance Party, published a tweet on the city's official Twitter account jokingly designed to put people off a visit to the southern city: "150 degrees in Adana on June 23".

Another tweet on the Bodrum municipality's account read: "Dear people of Istanbul, according to our information, the weather will be very stormy and snow is even expected on June 23. Due to the bad weather, the beaches will be closed. You can visit our city starting on June 24."

The campaign quickly spread on social media, and Cesme municipality joined in the fun with a tweet saying: "Because of a storm coming in from Istanbul, our coastlines are dangerous and it will be forbidden to enter the sea, even on June 23."

Other district municipalities joined in.

Last week the ousted CHP party accused authorities of "plain dictatorship" after the electoral board annulled the March 31 result, announcing a rerun of mayoral elections after complaints by the AKP of corruption.

However, Erdogan says the new poll is the "best step" for the country to take.