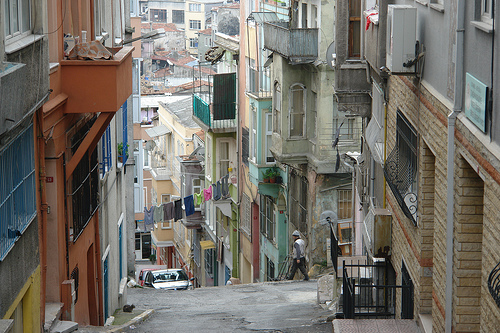 An anonymous benefactor who has paid off debts and left envelopes of cash on Istanbul doorsteps in the past has returned to Istanbul's Asian side.

In March, Istanbul's news agencies reported a mystery man who handed out wads of cash in some of the city's neediest suburbs.

Now, he's returned, to Tuzla, a working class neighbourhood on the city's eastern side.

A shop owner reports a man entering his store and asking to see his ledger.

“Someone came and asked me to show him the notebook where I record customers’ debts,” said owner Coskun Yilmaz.

“There were four people with large amounts outstanding and I told him where they lived. He came back again after talking to them and paid all the debts. I also learned he gave extra cash to those families,” Yilmaz said. “I asked him his name and he told me: ‘Just call me Robin Hood’.”

Food prices and rent have risen after last year's currency slide. While inflation has eased - dropping to 8.6% from a high of 25% - unemployment is rising and electricity costs are higher than last year.

The 'Robin Hood' is thought to be responsible for envelopes containing 1000 lira (US$175) that were slipped under the doors of needy families in March, when food costs were at an all-time high. He also paid off 25,000 lira ($4380) in grocery store debts during Eid, in June.

“[The man] told me he was there to pay the debts of those who cannot afford it,” said Tuncay Yasar, another Tuzla store owner.

“I have been here for 30 years and it was the first time I came across such a deed. My customers were very happy and wanted to see him but I don’t know who he is. He did not give his name and said he was doing this ‘only to earn God’s blessing’.”

Stories abound in the media about families affected by poverty, and in October, finance minister Berat Albayrak released news of measures aimed at tackling the rising cost of living, including freezing energy prices and an agreement with the private sector to cut the cost of goods.